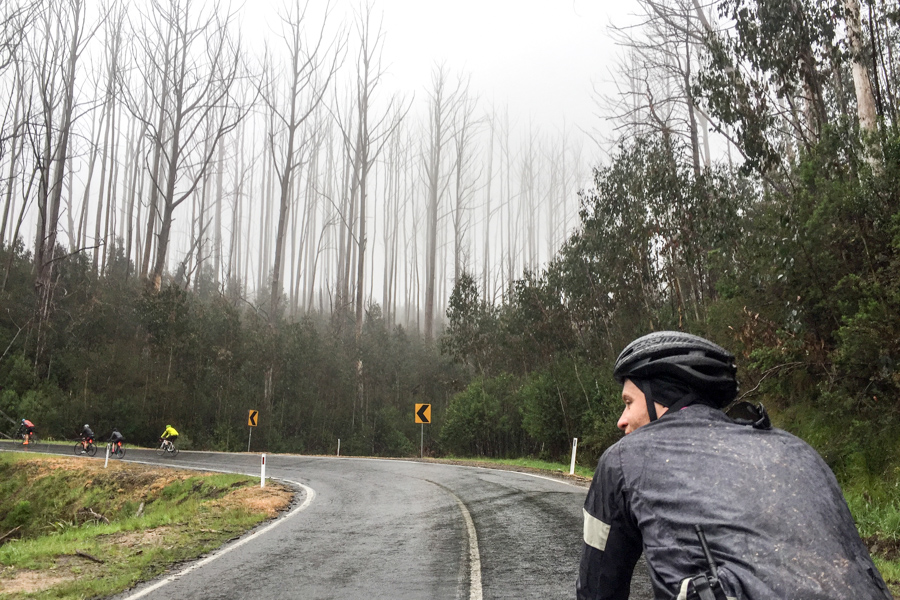 We’ve had some unfriendly weather in the five years we’ve been running Domestique 7 Peaks rides in Victoria’s high country. We’ve had scorching temperatures at Falls Creek, strong winds atop Mt. Hotham and a super-wet day at Mt. Buller a few years back. But perhaps the most extreme weather we’ve seen at a Domestique event came a little over a week ago when we tackled the Lake Mountain climb.

There’s always that point in the week before a ride when you’re hoping the long-range forecast was wrong and that things will fine up closer to the date. But with our Domestique 7 Peaks jaunt to Lake Mountain, the early forecast was for low temperatures and rain and it only stayed that way. In fact, while we were prepared for cold, wet weather, it was probably even more miserable than we first expected.

There we were, 150-200 of us huddled in an uncover area in Gallipoli Park, Marysville, just as we’d been two years earlier. And just like two years earlier, we’d had over 500 people say they’d come along, but the conditions ensured only the bravest (or silliest) dared turn up. 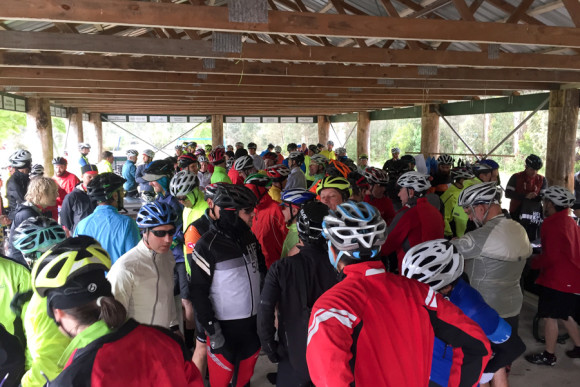 After a few quick words the congregation was out into the elements and into the worst of the Lake Mountain climb. That 4.5km section straight out of the roundabout — certainly the hardest of the climb — is always painful, particularly on cold legs. And so, even though we’d conquered the climb dozens of times between us, Andy and I were still surprised how tough we found those opening kilometres.

Ahead of us, others were having a similar experience. Some were walking, others were grinding away slowly as the road pushed into the low cloud clinging to the mountain. If we were riding into the clouds after just a few kilometres, what was it going to be like at the summit?! 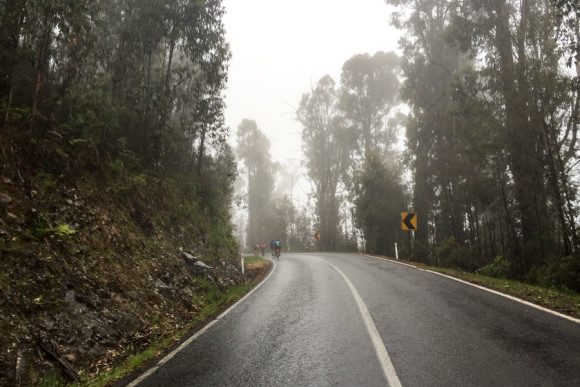 Into the clouds, just a couple kilometres into the climb.

It had been raining when Andy and I set off and it continued to drizzle for the entire 21km to the resort. It wasn’t too much of a problem — the effort of climbing the mountain kept us warm and the rain wasn’t heavy enough to penetrate the jackets we were wearing. But it did fill us with a sense of trepidation as we thought about the descent.

We were both pretty glad we’d organised a clothing courier service (my dad Ron) to carry riders’ bags of warm clothes from the bottom to the top. You really don’t want to start an alpine descent when you’re cold and wet — having a change of clothes will at least keep you warm to begin with.

Even through our ride-induced heat, it was clear when we got to the resort that it was cold. Seriously cold. My dad Ron, who was ushering riders into the warmth of the resort building, told us it was literally freezing — 0ºC.

While it was sleeting at the resort, a group of hikers confirmed that it was snowing at the summit. 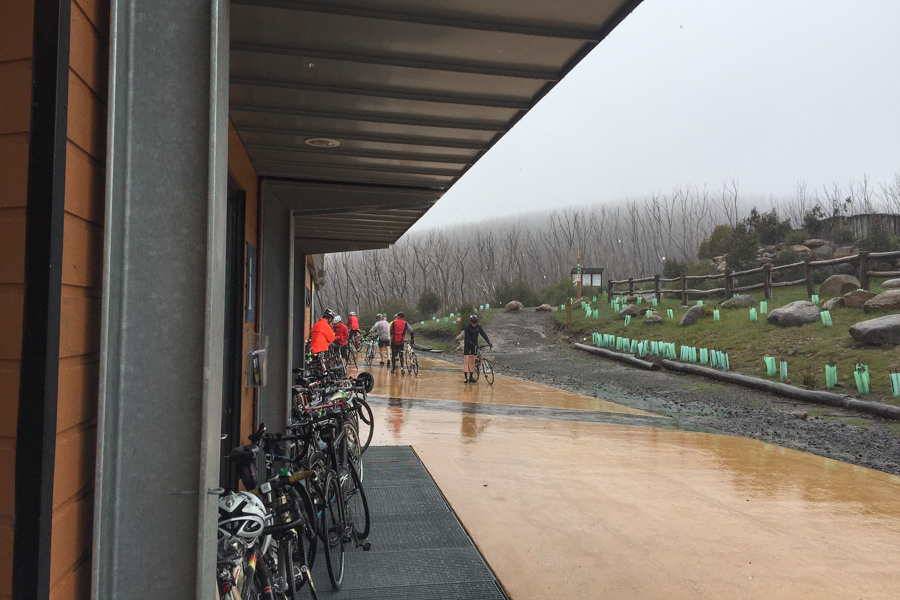 If you look closely you can see the droplets of rain against the backdrop of the tree-covered hill. Snow would have been more pleasant; at least we could have stayed mostly dry.

Heading inside I quickly got myself into some warmer clothes, hoping to dry off and thaw out as soon as possible. It was warm in the restaurant there, but with no change of knicks, I would still have cold, wet lycra clinging to me for the next hour or so.

It was remarkable watching people filter into the building and listening to those already there. Despite the horrendous conditions, almost everyone had a smile on their face. It makes sense in a perverse kind of way — it’s satisfying enough conquering an alpine climb; doing it in testing conditions takes it to another level.

But as satisfied as I felt having made it to the top (and having ~200 people turn up despite the conditions), I knew the real challenge was yet to come: the descent. 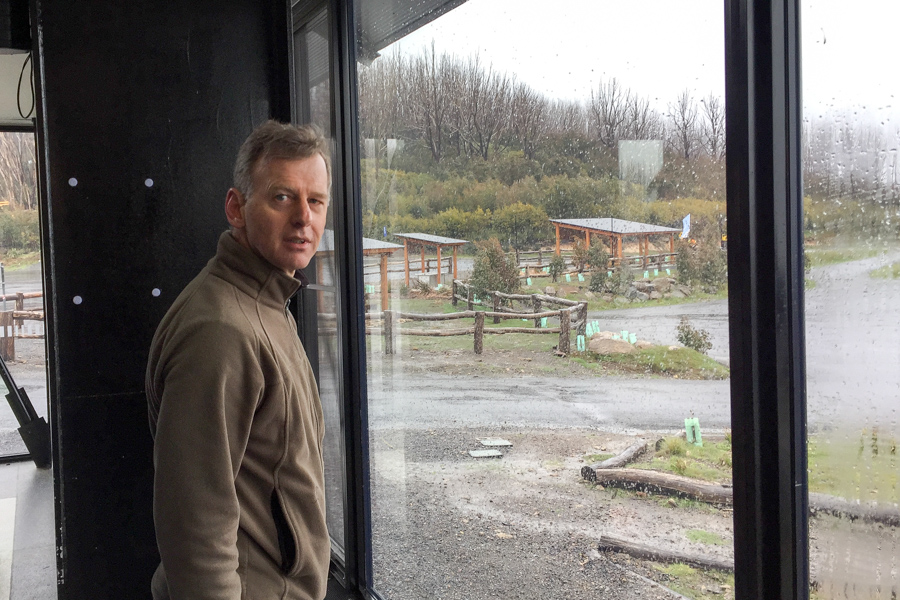 Dad stands at the window of the Lake Mountain resort cafe. It was genuinely freezing outside.

It took me a while to psych myself for that descent. Not least because of the one rider that had started descending before turning around after a few kilometres and returning to the summit in a shivering heap. It took half an hour in front of the heater while wrapped in blankets to thaw her out.

To start off with, the descent was fine — I was well layered up and protected from the cold. But as I got wetter, the cold worked its way through those layers and my temperature started to drop. In those last four and half kilometres, the fastest section of the descent, my hands were shaking so much from the cold that my front wheel was wobbling from side to side. Not the greatest feeling at >60km/h.

I was smiling and laughing as Andy and I rolled into Gallipoli Park but I knew that I needed to get into some warm, dry clothes as soon as possible. I had visions of a day in Hobart a little over four years ago when I got so cold it very nearly became dangerous. I wrote at the time:

The hot water [in the shower] ran out before I was warm and it took half an hour of lying in the motel bed, fully clothed, electric blanket set to max, with Sharon holding me before I stopped shivering.

That day in 2012 was the coldest I’ve ever been, on a bike ride or otherwise. And while it wasn’t quite that bad as I struggled to get changed in the Gallipoli Park toilet block last week, it was getting close. 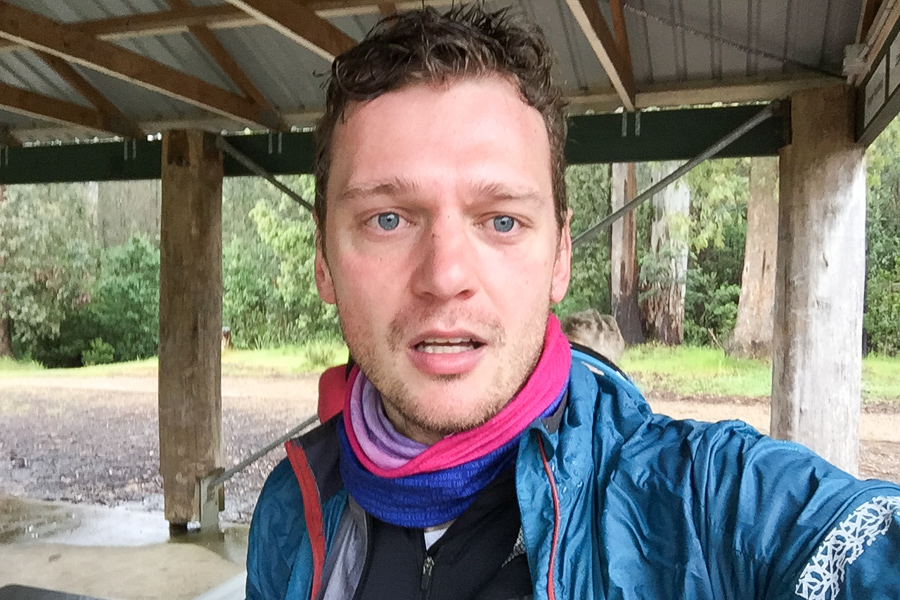 Frozen after the descent, despite five layers on my upper body. I’m surprised I could hold the camera still to take this photo.

Thankfully, I warmed up reasonably quickly and it wasn’t long before we were enjoying lunch in the comfort of the Marysville Bakery. I’m thoroughly impressed that so many people turned out to join us in those conditions and congratulate everyone that managed to get through it. If you joined us on the day and have an experience you’d like to share, I’d love to read about it in the comments below.

In closing I’d like to say a big thank you to our terrific sponsors: Tourism North East and Winners Bars. Without the support of these great brands we simply wouldn’t be able to put on these free events. If you like Winners Bars as much as we do, be sure to take advantage of the 20% discount code the guys there have provided for all 7 Peakers. Just head to the Winners Bars website, do your shopping, then use the code “7PEAKS” when you check out.

And finally today, I’d like to say a big thank you to our tireless volunteers who allow us to do what we do. To Kevin Goodall who put his hand up to ride lantern rouge (last rider on the road) – thank you. You did an amazing job in very testing conditions. Likewise to Eddie Wilson of Tourism North East — your support is hugely appreciated.

To Andrew Paul at the Lake Mountain Alpine Resort, thank you for your ongoing support and hospitality. To my partner Sharon, to Andy’s sister Nicole and to my dad Ron: thank you all for your tireless efforts on the day, and on so many days like it. We’re more grateful for your efforts than you know. The same applies to Andy’s wife Tammy, whose incredible efforts behind the scenes keep Domestique running.

And finally, a big thank you to everyone that came along to our Domestique 7 Peaks Ride at Lake Mountain. Kudos to you all for battling the conditions. We hope the day was as memorable for you as it was for us! 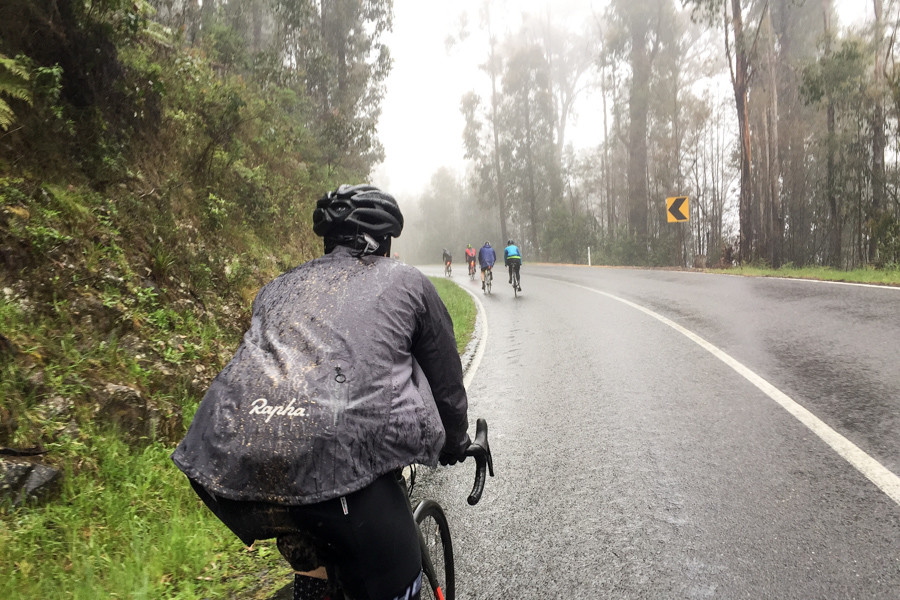 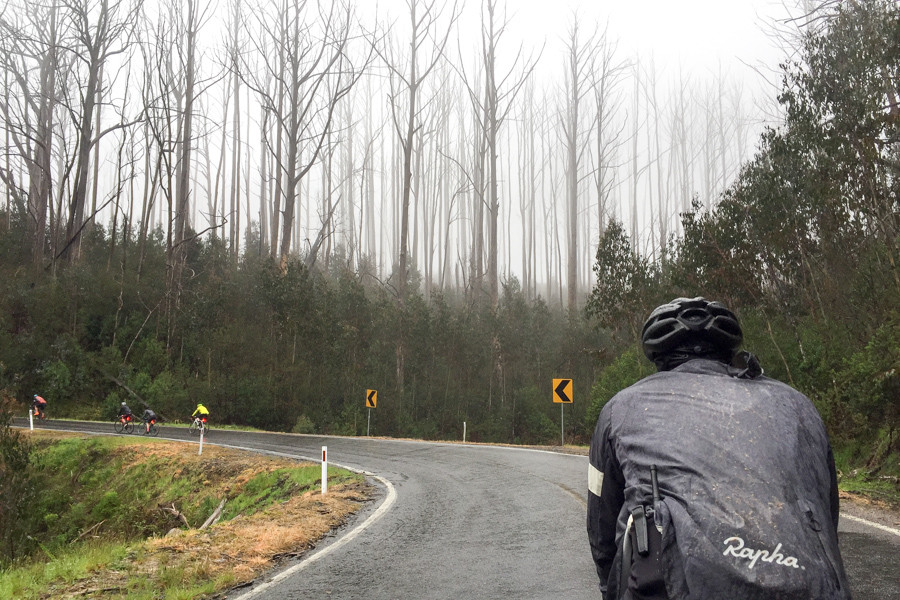 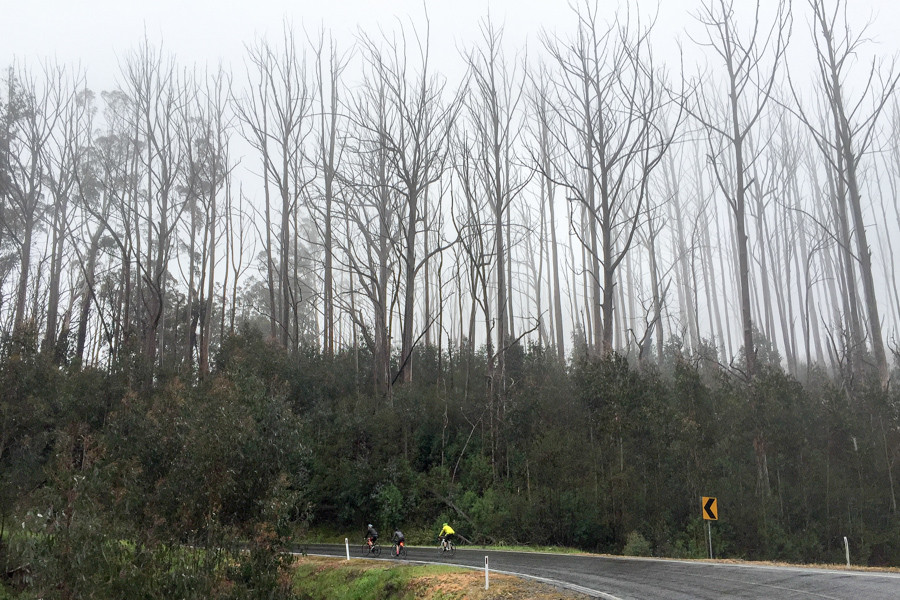 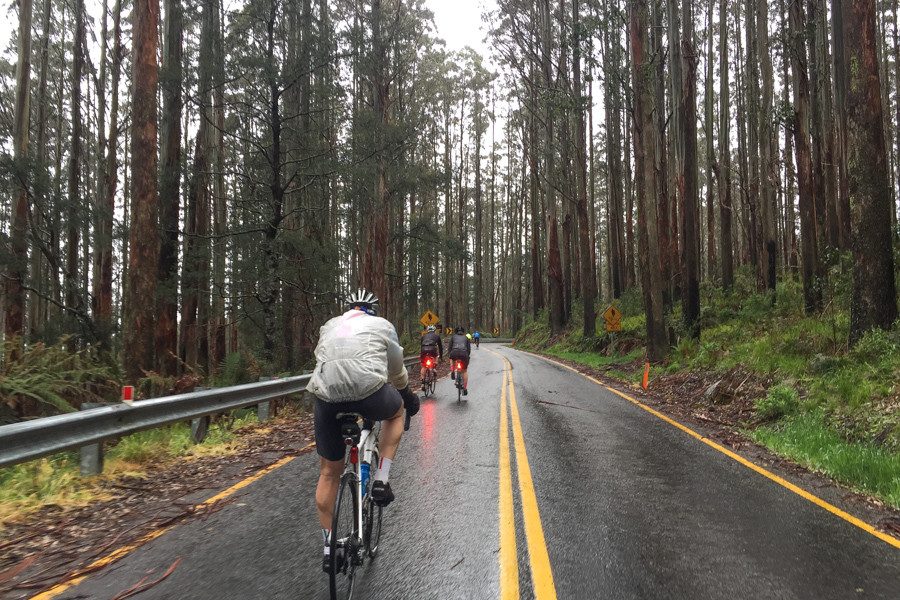 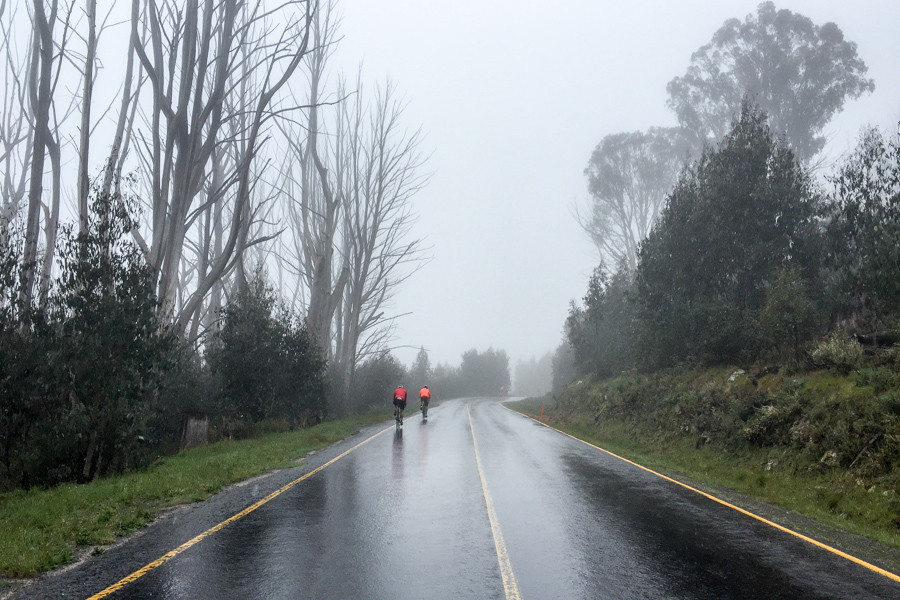 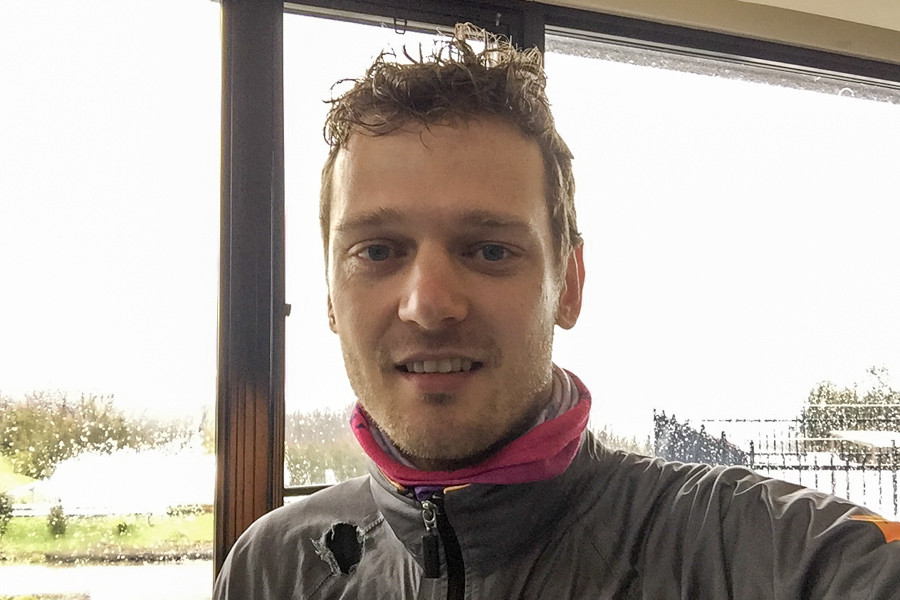 Before the descent, when I was still warm. How’d I managed to rip my jacket? By crashing while descending a mountain in Austria. 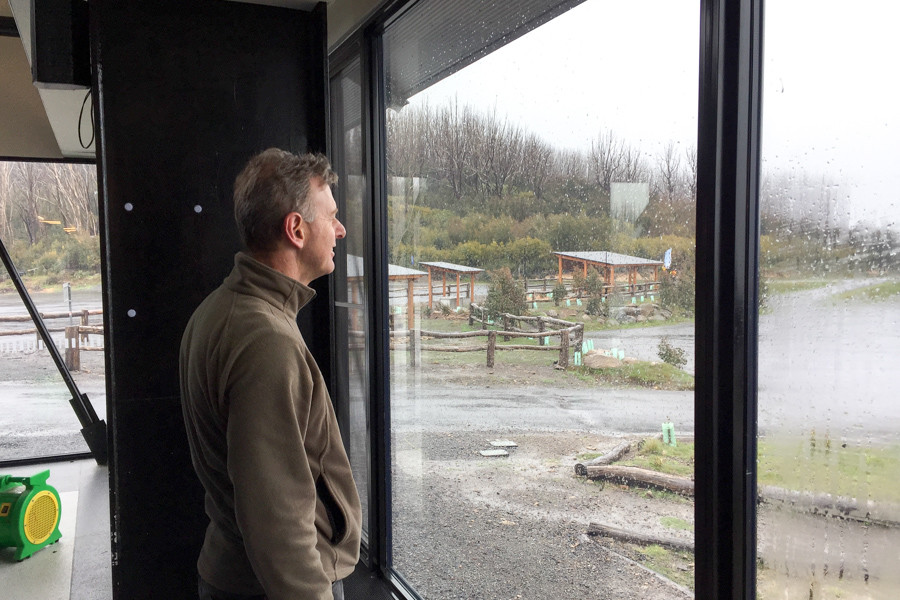 ← A ride down memory lane: Bike Camp revisited
Clearing out the cobwebs →