Half of all Australians will be diagnosed with cancer at some point in their lifetime. And nearly every Australian will be affected by cancer in some way. My uncle Corry de Neef is doing his bit to raise money for cancer research, taking part in an upcoming two-day charity ride … and he’d like your help.

On October 27 and 28, myself and 2,500 other cyclists will ride from Melbourne, through the Yarra Valley and end up in Healesville where we’ll stay the night. The following day we’ll ride back to Melbourne … assuming we can still walk or sit in the saddle (there are ample ‘sag wagons’ for those that can’t).

The ride covers 100km each day and more than a couple hills. It’s called The Ride to Conquer Cancer and it’s one of a series of charity rides in Australia and Canada.

The first Ride to Conquer Cancer was held in British Columbia in Canada in 2009. Roughly 1,700 participants rode the 262km from Vancouver to Seattle to raise $6.9 million for the BC Cancer Foundation. In 2011, the ride arrived in Australia, in Brisbane. It makes sense for the ride to have come to Australia next — Australia’s cancer rates are higher than Canada’s, and Brisbane’s are among the highest in Australia.

More than 1,300 riders completed the 200km course and raised $4.7 million in the first Australian Ride to Conquer Cancer. It was such a success that the organisers signed up for another three years. This year, there will be rides in Brisbane, Perth, Sydney and Melbourne.

The riders are people with cancer, people who have survived cancer and people whose lives have been touched by cancer in many ways. There will also be riders who like a good charity bash, a good ride, a good way of making new friends and, no doubt, the odd professional cyclist and ex-Olympian to keep the pace up.

Me? I am a ride-to-work cyclist — about 35 minutes to and from East Melbourne every day. This daily commute certainly isn’t anything strenuous — it’s just a quick trip down the traffic nightmare that is Heidelberg Road, into Studley Park and then along the bike trails until I hit Peter MacCallum Cancer Centre, where I work as a pain specialist (yeah, yeah, I’ve heard the jokes).

My colleagues and I in the Pain and Palliative Care department provide pain- and symptom-relief for people with cancer throughout the course of their disease – not just at the end of life. This is an important aspect of any treatment offered at Peter Mac — a person with cancer, even without advanced disease, often has needs that go beyond physical pain or the disease process itself. They may need psychological or spiritual care, assistance with finances and assuring the security of the family, and, of course, medications.

A few weeks ago, the head of my department said that our unit needed to front a team — Peter Mac is the beneficiary of funds raised in the Melbourne version of the Ride to Conquer Cancer — and suggesting that, as I ride to work each day, 100km should be nothing.

So with several others from Peter Mac I signed my name on the dotted line and started to collect the $2,500 every rider needs to collect to take part in the ride. Our team name? The Cycle of Life (not my choice).

A few days after signing up, I thought I would go on my first training ride. I packed light: an apple, gloves, raincoat, a novel and my trusty copy of Bike Paths Victoria. The Cannondale ‘Bad Boy’ (a flat-bar hybrid) had been serviced recently and was running sort-of smoothly.

I had a plan: up the Eastern Freeway to Eastlink, down the Eastlink Trail to the extension of Gardiners Creek Trail and back home along the river. So I headed up to The Boulevard in Ivanhoe to Wilson’s Reserve and within minutes, bike and I were encased in mud and sliding all over the track … or at least where the track used to be. The bike was cleaner after a few deeper puddles, but I maintained a mudpack for the next seven hours.

The Eastern Freeway path was all known territory and I made it to Mullum Mullum Park without incident. The trail through the park was clearly marked and right where it was supposed to be — along Eastlink. It was a pleasant surprise — sure, there were some bits in full blast of the freeway, but there were more areas around the wetlands, where you couldn’t see, and at times, couldn’t hear the traffic. Over all, it was very pleasant, and I didn’t notice anything amiss until the trail seemed to disappear entirely at Cheltenham Road.

Of course I was not fazed at all, after all I had my trusty copy of Bike Paths Victoria. Problem was, the maps looked wrong, and it took me a little time to work out what was wrong, in particular, what was missing. What was missing was the Eastlink Trail, or rather Eastlink itself. I checked the publication date – 2002. Lesson #1 learned.

The other thing not mentioned on the map was the construction works being done on the Dandenong bypass – although I can’t blame any map for that — which seemed to be at the end of every track remnant I tried. If I had known that part of Melbourne well, I may have worked out lesson #2 – just because things are going smoothly, and you are riding on a clear path, doesn’t mean you aren’t hopelessly lost. I wasn’t meant to be anywhere near Cheltenham Road.

Luckily, a very nice man working in a display village in Keysborough came to my rescue. Or, to be accurate, I invaded his pristine working environment in mud-encased cycling gear. He had been having a good day until then; he’d collected several deposits and was having a quiet game on his laptop when I slurped over to his desk and asked for directions.

Isn’t Google Maps wonderful? I was able to instantly see that I didn’t want to be where I was, and that I would have to go back a long way to get where I wanted to be. Instead I opted for the coastal route back home and eventually found Dandenong Creek path, within waving distance of Frankston.

I eventually got to Beach Road via Chelsea, Edithvale, Aspendale and Mordialloc and had a very late lunch at Parkdale Beach Café and Kiosk (free plug) who made a delicious steak sandwich. Then I finally headed along Beach Road back to the city. I have heard a lot of complaints about riding along Beach Road — from cyclists and drivers — but on a Wednesday afternoon, with the sun shining on the bay, it was a real pleasure. Coming around the corner at Middle Brighton Beach and seeing the afternoon sun reflecting on the city and the bay was a real highlight. Finally I dove through St. Kilda to get to the Yarra before taking the Main Yarra Trail back home.

I got back seven hours after I started, having travelled 134km and with sweat having washed clean tracks down my face. Best thing was I could walk the next day. The day after, not to rest on my laurels, I managed a much more modest ride of about 57km.

So, I am hopeful I can manage the distance on back-to-back days. I’m going to keep training, and I am going to buy an updated version of Bike Paths Victoria. In the meantime, I’m also going to keep raising money.

If you feel like supporting the Ride to Conquer Cancer, it’s too late to register as a rider, but you can make a donation. With over 2,500 riders, someone you know will already be riding or may be part of a team.

Go to the Ride to Conquer Cancer website, select the city you want and then click ‘Donate’. You will be given the option of searching for an individual or a team, and then you can make a donation. Or you could sponsor me and my team. 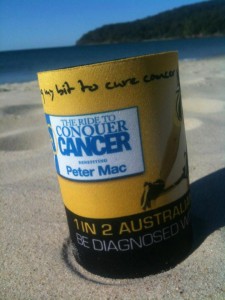 How does the money help, you ask? It goes to research institutions for the development of treatments. Importantly, none of the money goes to big pharmaceutical companies. Most of the cancer treatments that may be developed are unlikely to be very profitable for the big companies.

The drugs will be highly specific to certain types of cancers and possibly even to subgroups of cancer types. It can cost hundreds of millions of dollars to get new drugs on the market. And drugs are not the only types of treatments being developed.

Developments in the past 30 years have made some cancers that were once highly lethal, potentially curable in the majority of cases — testicular cancers for instance. Genes have been detected within certain types of cancer that can be specifically targeted by antibodies and so improve the response to treatment. One such gene is the BRAF gene found in 2% of people with melanoma.

I would urge you to donate something to those taking part in the Ride to Conquer Cancer. It is a good cause — directly or indirectly, cancer is going to affect you sometime in your life, and besides, it’s damn hard to raise $2,500 without your help!

If you’d like to assist with Corry’s fundraising efforts, you can make a donation here.

One Reply to “Guest post: The Ride to Conquer Cancer”