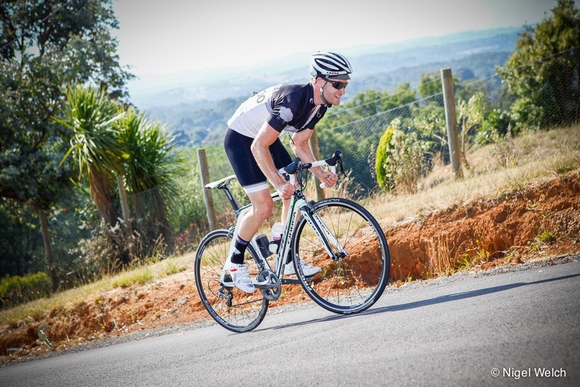 In the first part of this series, we looked at how the gradient of a hill is calculated and how hard various gradients feel. In this piece we’ll dig a little deeper, employing some simple physics to work out, objectively, how much harder various gradients are than others and what effect a rider’s weight has on climbing speed.

A quick note: the formula used in this piece might look a little daunting but it’s a lot simpler than it seems.

There are a number of ways of objectively measuring the difficulty of one gradient compared with another. For a start we need to realise that there are three main forces acting against a cyclist while riding: wind resistance, road friction and gravity. These three forces can be represented in the following formula¹:

Let’s assume I want to work out how much power (in watts) I need to produce to get up a hill of 5% gradient at a speed of 10km/h (not very fast). The values I need are:

So plugging in the various values we get:

While I’d need to deliver 132W to the back wheel in order to keep moving at 10km/h, the road bike isn’t a perfect machine and the power I push through the pedals isn’t the same amount that’s delivered to the wheel. We can estimate that a well-maintained bike has a drivetrain efficiency of roughly 95% though, so:

Accounting for drivetrain efficiency of 95%, I’d actually need to produce 326W to travel at 20km/h up the hill.

So, how does the required power change depending on the gradient, assuming we’re talking about a constant speed? That is, objectively, how much harder is one gradient compared to another?

I’ve gone through and calculated the required wattage for the whole number gradients from 0% (a flat road) to 20% (ouch), assuming that I want to maintain a speed of 20km/h on each of those grades. I’ve also factored in drivetrain efficiency. Here’s a graph:

As you can see, the line of best fit is straight, meaning the required power increases proportionally with the gradient of the hill. So, at 90kg (rider + bike), and with the assumptions made above5, I need to produce roughly an extra 52W of power for every percentage point the gradient increases by, in order to maintain 20km/h. This number will be different for every rider,  and depends on many factors.

One of the biggest factors, of course, is weight. If you’re lighter, you’ve got less mass to haul uphill and therefore less power required to ride at the target speed. That’s why the best climbers in the world are super light (while still able to maintain a high power output).

To emphasise this point, here’s the above graph with an extra line added to represent a rider and bike with a combined weight of 85kg (i.e. what would happen if I lost 5kg):

It mightn’t seem like there’s much of a difference, particularly at lower gradients, but every watt counts, especially on a long ride with lots of climbing, like the 3 Peaks Challenge. If you have to push a few extra watts uphill every time you climb, this can make a significant difference to your fatigue levels by the time you reach the final climb.

Of course, a difference of just a few watts can make a massive difference in a race situation too, or even if you’re just trying to beat your mates up a hill. Let’s use arguably the most well-known climb in Melbourne, the 1 in 20, as an example.

It’s pretty obvious at this point that Rider B is going to win, all things being equal, but by how much? Let’s take the formula we used above and reverse-engineer it:

You’ll recall that 326W is the required wattage when considering a drivetrain efficiency of 95%, which correlates with 310W on the road — the power we need to use in this calculation. For this calculation we’ll also need the average gradient of the 1 in 20 which is more or less 4% (not 5% as the climb’s name would suggest).

Now let’s assume that v and s are the same value — that is, that there’s no wind to speak of:

Solving the equation from here isn’t trivial but with the help of an online “cubic equation calculator” I can tell you that s = 6.20m/s or 22.3km/h.

At this average speed, how long would the 6.8km-long climb take?

And what about Rider B, who’s just as powerful as rider B, but 5kg lighter?

And how long will that average speed take Rider B to finish the climb?

So Rider B wins by 30 seconds. It’s worth noting here that the 1 in 20 probably isn’t the best hill to use as an example as there are two significant gradient changes: from the first section into the false-flat, and from the false-flat into the final section of the climb.

Breaking the 1 in 20 down into three sections — 3.3km at 4.5%, 1.1km at 1.9% and 2.4km at 4.5% — and running the calculations again returns a slightly different result: 17 minutes 30 seconds versus 18 minutes 7 seconds. But this example should make it clear that the lighter you are the better suited you are to climbing, assuming a fixed power output.

Here’s another way of looking at it.

A typical masters C-grade rider might be able to sustain 300W for an hour, but above this “functional threshold power”, his endurance will drop off quickly. He might be able to push 330W for 15 minutes, for example, but as the wattage increases, the length of time he’s able to maintain that wattage for decreases.

Now let’s assume this C-grade rider is racing in a bunch when the riders turn a corner and start climbing. Let’s say that our rider needs to climb at about 25km/h in order to stay with the bunch up the climb and that maintaining that speed requires our rider to produce 330W.

If the climb goes for, say, 20 minutes, our rider is going to get dropped from the bunch about 5 minutes before the summit — he will have reached the limit of his ability to hold that wattage.

Now imagine if the same rider, with the same functional threshold, managed to lose 5kg. The power he’d need to produce in order to climb at 25km/h would now be noticeably less than 330W. As a result our rider might be able to stay with the bunch for the entire 20-minute climb.

This issue of power-to-weight ratios deserves an article (or several) of its own, but we can see from the above that there are three main ways you can improve your climbing speed:

If you’d like to have a play around with some numbers yourself, without having to worry about formulas, variables and coefficients, I’d highly recommend the Bike Calculator website and the excellent and free Bike Calculator app for iDevices.

I’d like to say a huge thank you to Josh Goodall for his help in checking and revising this article. Thanks too to Julian Del Beato, Jeremy Austin,and Marcus Nyeholt for their feedback and suggestions.

63 Replies to “Gradients and cycling: how much harder are steeper climbs?”