This is the first of three posts about my recent trip to the Victorian Alps. I stayed at Falls Creek courtesy of Quay West Resort & Spa Falls Creek. Thanks to Andy van Bergen and the folks at Mirvac and Quay West for making this trip possible.

After riding 500km in the last nine days of 2011, I spent the first two days of the new year resting. I’m glad I did, because the next three days were anything but restful.

Early on Tuesday morning I picked up the Donvale Demon and drove us north. My brother Brendan was driving up separately and we had organised to meet at Falls Creek.

The drive north was long and, for the most part, quite uneventful. We stopped briefly at Glenrowan for the obligatory Macca’s stop and at Mt. Beauty to pick up groceries. The forecast for Mt. Beauty was ‘sunny and 40 degrees’ and when we stopped for groceries in the late morning, it must have been in the mid-30s already. 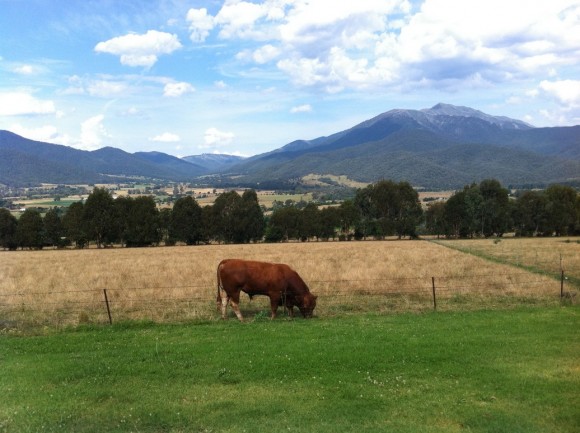 We got to Falls Creek a little after noon and the plan was to unpack the cars and head out for a ride. Unfortunately, our room at Quay West was unavailable until 4pm so we had to get ready for our ride in the car park.

As we got ready to roll out, we chatted about how far we would ride, given it would be 40 degrees in Mt. Beauty by the time we got there. The Donvale Demon was keen to get in as much riding as possible and was happy to aim for the Tawonga Gap. Brendan was less enthusiastic about the thought of climbing Tawonga in the extreme heat. I was happy to go with the flow.

In the end, we all rode different distances. We rolled out of Falls Creek together but at Bogong Brendan turned around and climbed back up the mountain before it got too hot.

The Demon and I continued, working our way through the stunning rollers between Bogong and Mt. Beauty, the temperature rising all the while. By the time we reached the Tawonga Gap, my Garmin 500 was reading 41 degrees.

But climb the Tawonga Gap we did. We both agreed to ride at our own pace and meet at the top and I set off at a comfortable, but challenging speed. Despite the heat I was keen to see if I could set a new PB on the climb — something below 30 minutes if possible.

In the opening kilometres of the climb, I barely even noticed the heat –I was more focused on sticking to a comfortable rhythm. But then the road emerged from the trees and I could hide from the heat no longer.

In one particularly exposed section of the climb, a blistering headwind whipped up and, combined with the heat from the sun and the heat reflecting off the road, it felt like I was riding inside an oven. It must have been close to 50 degrees for a couple of moments there.

Whenever I climb the Tawonga Gap from the Mt. Beauty side I’m struck by how long the final two kilometres seem to take. Every corner looks like the last and with a couple of lookouts that look like the end of the climb, I’m always sucked in to thinking the hard work is done.

Eventually I did make it to the top, sweating profusely and with a fair bit of nausea to contend with. I felt much better when I realised I’d finished the climb in 29 minutes 34 seconds — a PB by more than two minutes, despite the roasting heat.

I felt even better when I staggered over to the lookout and was hit by a beautiful cool breeze coming from the valley below.

Some time later the Donvale Demon appeared round the final corner and worked his way to the top. He had suffered in the heat as well but seemed relieved to have ticked Tawonga Gap off his “to climb” list.

After a quick rest in the shade we headed back down the hill, making sure we avoided the many sections where the tar had melted. At Mt. Beauty we both grabbed a cold drink and chocolate bar before making our way back toward Falls Creek.

By the time we got to Bogong, the Donvale Demon had decided to save himself for the following day and Brendan drove down to pick him up, a couple of kilometres uphill from Bogong. 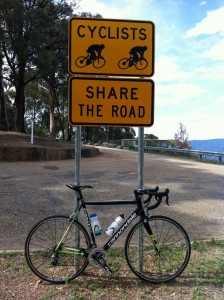 I powered on, aware that I would need to complete the Falls Creek climb in roughly an hour if I wanted to have a shower before dinner. In hindsight, I probably went a little hard on the climb and underestimated the toll the weather had taken on my body.

After roughly 6km I hit the wall — I was hungry, dehydrated, tired and, above all, hot. I lost concentration a couple of times, and on one occassion I looked up to see my front wheel fall into the ditch on the side of the road.

Brendan and the Demon met me a few kilometres after the ditch incident and gave me some Powerade to pep me up. It worked, and I was able to find a decent rhythm for the final kilometres to the summit.

I normally find the Mt. Beauty side of Falls Creek to be one of the easiest alpine climbs but on this day, it was anything but easy. I got to the hotel feeling all kinds of tired but really glad to have completed the climb.

One challenging day in the Alps complete. Only two to go.