On the morning of Christmas Eve I picked Brendan up early in the morning and drove us out to the town of Trentham — roughly 40km west of Mt Macedon. We were keen to notch up another century and the ride to and from Trentham, plus climbing Mt. Macedon from both sides, would allow us to do that.

The ride from Trentham to Woodend was nice and quick along some gorgeous country roads. We couldn’t work out why we were able to average around 35km/h without any trouble (with a headwind no less) but a look at the profile later showed those first 25km to be ever-so-slightly downhill.

As we rolled in to Woodend I got a message from Marcus Nyeholt, with whom I’d ridden the previous weekend. Marcus was up in Macedon visiting family for Christmas and was able to sneak away for a quick climb with Brendan and I. We agreed to meet at the bottom of the south-side climb but before we could do that, Brendan and I had to climb the north side.

We rolled out of Woodend toward the start of the climb and decided to take things pretty easy — no sense burying ourselves with the (epic) south-side climb still to go. It was only the second time I’d climbed Mt. Macedon from Woodend and I’d forgotten how picturesque the climb is once you get a few kilometres in. 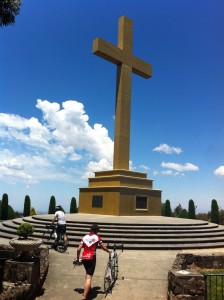 After climbing gently for ~8km we turned right at Cameron Drive and covered the few undulating kilometres to the top of the mountain and the Memorial Cross. We didn’t stick around long before heading back to Mt. Macedon Road, turning right and bombing down toward the start of the south-side climb.

If you’ve ever climbed Mt. Macedon from the south, you’ll know ridiculously steep the climb is. Of course, a steep hill means a fast descent and both Brendan and I reached our highest-ever speeds en route to our rendezvous with Marcus. I touched 84km/h and I’d be lying if I said I wasn’t thinking about what might happen if I came off.

With the temperature pushing in to the low 30s, we met Marcus and began our Mt. Macedon assault from the Gisborne side.

There’s no way to get around the fact that the south-side climb is brutally steep. There are several sustained pitches above 10% gradient and when it’s 32 degrees outside and you’re in the full sun, it’s not the most pleasant experience you can have on the bike.

The three of us decided to climb the mountain at our own pace and I managed to find a rhythm that saw me slightly ahead of Marcus with Brendan a little further back. For the first time since getting my new bike I had reason to put the compact crankset to full use and on some of the sustained 10%+ sections, I was using every inch of the 34 x 28 combination.

The one thing that makes the south-side climb slightly more bearable than, say, Mt. Baw Baw, is the fact it rises in steep ramps with “flat” sections in between. These short, flat sections give you a chance to recover before throwing yourself at the next wall. Mind you, when 6% seems flat, it’s a fair indication the climb is pretty steep.

I reached the Cameron Drive turn-off sweating profusely and headed toward the Memorial Cross. I had climbed faster than I thought I would and so I decided I’d push hard for the final 3km and see what sort of time I could post. In the end, I reached the Memorial Cross car park in a little over 36 minutes — 6 minutes faster than my previous attempt.

Once Marcus and Brendan joined me at the summit we wandered over to the Memorial Cross itself for a quick break, before heading back down the mountain. Marcus left us at Mt. Macedon Road, heading back down the steep side toward Macedon. Brendan and I turned left and bombed our way back toward Woodend for something to eat and drink. 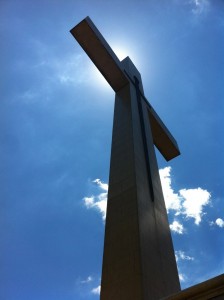 By this time, my Garmin 500 was reading 35 degrees and in the open sun it was far from comfortable. We took some time to refuel before mounting up and setting off on the ~25km back to Trentham. As we rolled out of Woodend Brendan looked up and said something along the lines of: “I think we’re going to get wet.”

I was initially sceptical — it had been blisteringly hot for most of the day and the sun was still out. But, sure enough, there did seem to be a horrible black smudge in the direction of Trentham.

We got about halfway back to Trentham before the heavens opened. It was one of those storms that comes up suddenly and is over before you know it. Of course it hung around long enough to soak us to the bone, to make riding pretty miserable, and, as an added bonus, to pelt us with hail.

I’d never ridden in hail before and I can’t say I’m keen to do so again. It hurts when pea-sized bits of ice slam in to unprotected skin!

By the time we got back to the car we’d almost dried off entirely. We packed up our things and headed off, tired from a long, hilly ride but glad to have added another solid day’s riding to our 3 Peaks training.

Next Tuesday, Brendan, the Donvale Demon and I are heading up to Falls Creek for a couple days of climb-heavy cycling. It will be good to get back up to the high country and, weather pending, should make for some excellent training.

In the meantime, don’t forget you can come and say ‘hi’ over at Twitter, Facebook and/or Strava. Of course, you can always leave a comment below or send me an email with feedback about the blog or site more generally.

I hope you all had a marvelous Christmas with family and friends and that you didn’t strap on too many additional kilos. Have a great New Year and stay safe on the roads this silly season.