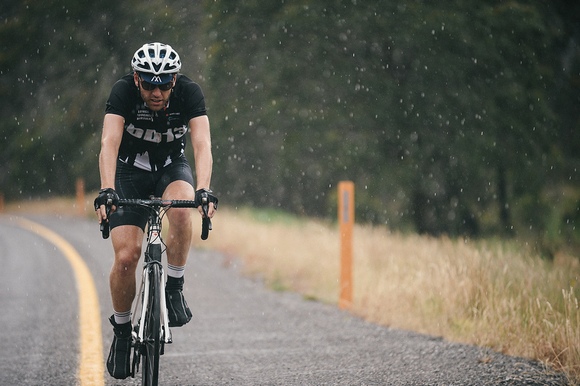 This is the fourth and final blog post about a recent trip to the Victorian Alps for the Domestique 7 Peaks Series. You can read part one, about our Falls Creek ride, here, and part two, about Mt. Hotham, here and part three, about our Mt. Buffalo climb here.

The final day of our Victorian Alps trip is often the hardest. With heavy legs, a long drive to the start in Omeo and a long, exposed climb to Dinner Plain ahead, it’s often a little hard to get motivated. But this time around, the Dinner Plain climb was the most memorable of the entire trip.

It was roasting hot in Omeo and those of us that knew the climb well knew how much of a role the heat was likely to play. The first sustained section of climbing is very exposed (not to mention quite steep) and riding that in the heat can be a great challenge. In fact, here’s what I wrote about climbing Dinner Plain the first time I did it, this time four years ago:

Overall, I’d have to rate this ride as one of the least enjoyable cycling experiences I’ve ever had. The road surface was ordinary, the temperature was uncomfortably high and the climb itself was fairly boring.

Thankfully I’ve come to enjoy the climb a little more since then. 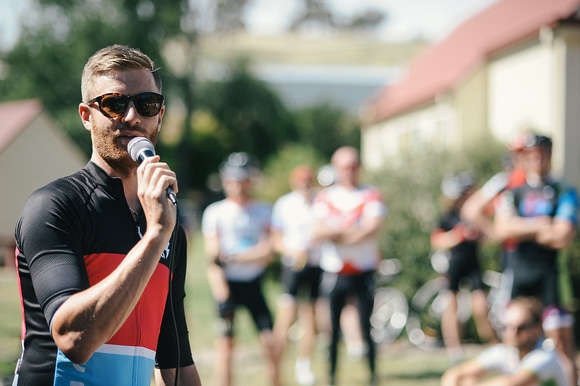 It was my turn to play lanterne rouge (last rider on the road) so I waited back until everyone had left and helped our wonderful volunteers to pack up. Then I set off, expecting to be spending much of the day riding along (as I had on Mt. Hotham a day earlier)

As expected, that first section of climbing was uncomfortably challenging in the heat. I’d been a little concerned that my ITB pain from the day before was going to flare up but, thankfully, it stayed at bay.

I caught the backmarkers about 8km into the 42km climb, just before they crested the first sustained section of climbing. They too were struggling on the steeper slopes in the heat but they were still making good progress. 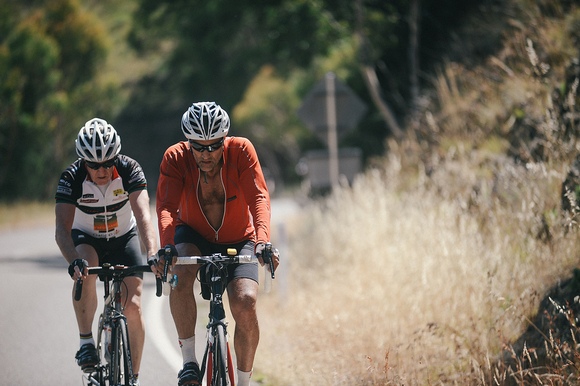 The thing about Dinner Plain is, despite it’s length, it does give you plenty of rest along the way. Once you conquer that first section of climbing at about 9km out of Omeo, the next 14km are quite undulating with a great descent thrown in as well.

Our little group chopped through those middle kilometres well, despite a block headwind slowing our progress. I spent some time riding with the group and spent some time off the back, giving them a little bit of space so they didn’t feel like they were under any pressure.

The sun was still beating down when we reached the much-appreciated water stop halfway through the climb. The Winners bars left out for us were well received too. We pressed on after a short break, making our way into the second section of steep, sustained climbing. 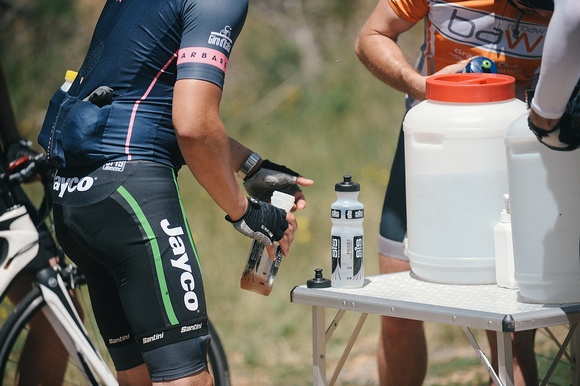 About two thirds of the way to the top my partner Sharon — who was driving up and down the group — swung past to tell me there was rain and hail up ahead. She wasn’t wrong.

Where the lower slopes of Dinner Plain had been utterly roasting, the final third of the climb was cold and wet. Big, black clouds rolled over and a short time later, me and Sarah (the final rider on the road) were being pelted by rain and then hail.

One piece of advice I’d give to anyone that’s climbing in the high mountains for the first time is to bring a rain jacket, regardless of the conditions at the bottom. It’s something I learned a few years ago when climbing Mt. Donna Buang on a beautiful sunny day. It was 24 degrees at the bottom, and in the single digits at the top. Descending in just knicks and a short-sleeve jersey was a great wake-up call.

It felt strange slipping a rain jacket into my pocket in Omeo given how hot it was but I’m really glad I did. 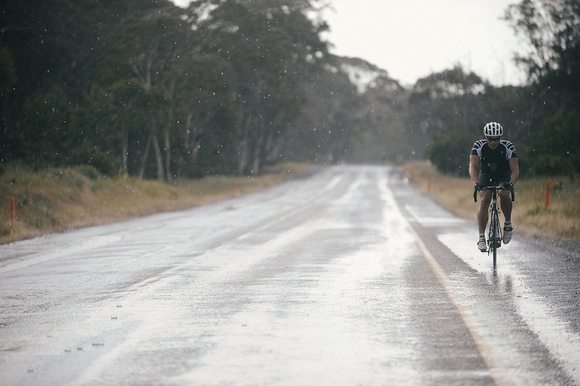 In all we got hit by three bands of rain and hail. At one point we were being pelted by marble-sized hailstones and I distinctly remember climbing a nicely cambered corner and seeing a mass of hailstones roll down the road towards my wheel. You don’t see that every day.

Unfortunately the hail was even worse up near the top and some riders reached Dinner Plain with welts having been hit by hailstones nearly as big as golf balls. Far from ideal.

Through it all Sarah was unfazed. She’d ridden the Great Victorian Bike Ride a few months earlier in similarly horrendous conditions and wasn’t concerned about getting a little wet. She powered on, chopping through the final, grindy kilometres to the summit as the weather started to clear.

We pulled into the Dinner Plain resort just before 2pm, quite a bit earlier than I’d expected when I set out for Omeo alone. Sarah seemed relieved to have made it and I was too — it marked the end of a long and tiring but ultimately very rewarding weekend in the Alps. 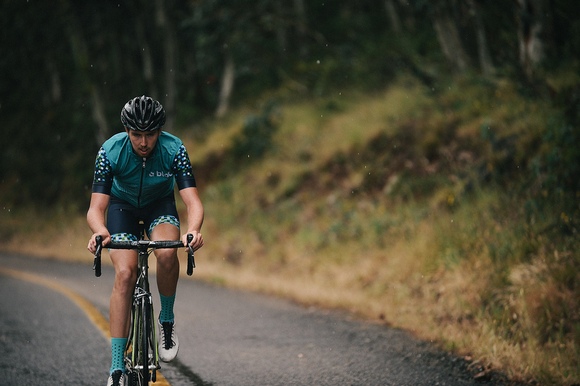 I’d like to say a big thank you to everyone that joined us over the weekend, whether that was for one ride or all four. It was terrific to have such a great group come out and to hear how much you enjoyed the rides.

Of course, these rides wouldn’t be possible without the time and energy invested by our great volunteers. To everyone that helped out across the weekend: thank you. And for Dinner Plain in particular, a big thanks to Sharon Ridgway, Tammy van Bergen, Nick Harvey, Brian and Maria Beardon, Nicole van Bergen and Dr Ryan McMullan, the last of whom gave up his ride plans just to help us out. Thanks!

And we need to say a big thank you to our Series sponsors as well: Winners Nutrition, CycleCover, Sukkie Hydration and Tourism North East. We really do appreciate your ongoing support! 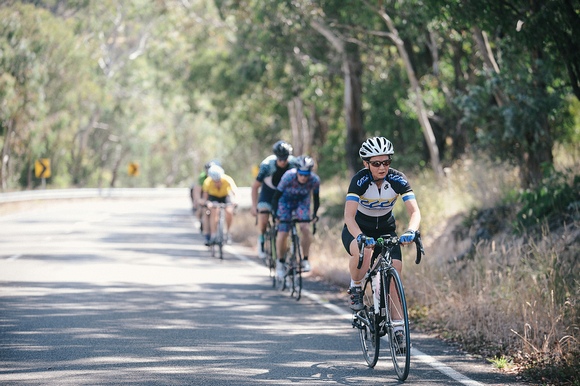 So what’s next? Well, we’ve got one ride left in the Domestique 7 Peaks Series for 2014/15: the mighty Mt. Baw Baw on Sunday February 15. We’ve saved what is arguably the hardest of the 7 Peaks for last!

Before then though there’s another Domestique ride we’d love you to come along to. On February 7 out at Mt. Donna Buang 25 women will be attempting the largest ever group Everesting when they try to climb the great mountain nine times. We’re running a Domestique mass-participation ride on the same day, to show a bit of support for the women that are attempting this extraordinary feat.

Our ride, like the Domestique 7 Peaks Series, is free and open to riders of all abilities, from those that want to tackle Mt. Donna Buang for the first time, to those that would like to challenge themselves with a few repeats. We’d love to see you out there, rolling a lap (or more) to help these women on their way to an Everesting! 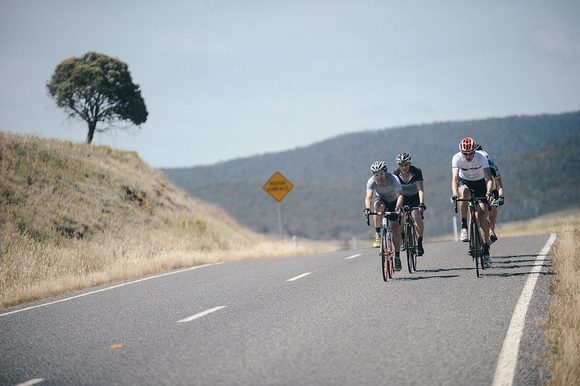 And don’t forget we’ll be heading up to Mt. Buninyong this Saturday to support the women riding in the Nationals Road Race. It’ll be a lot of fun out on the mountain and we hope you can join us!

Until then, thanks very much for reading and ride safe!

All photos in this post appear courtesy of Caz Whitehead. You can find more photos from the ride here.