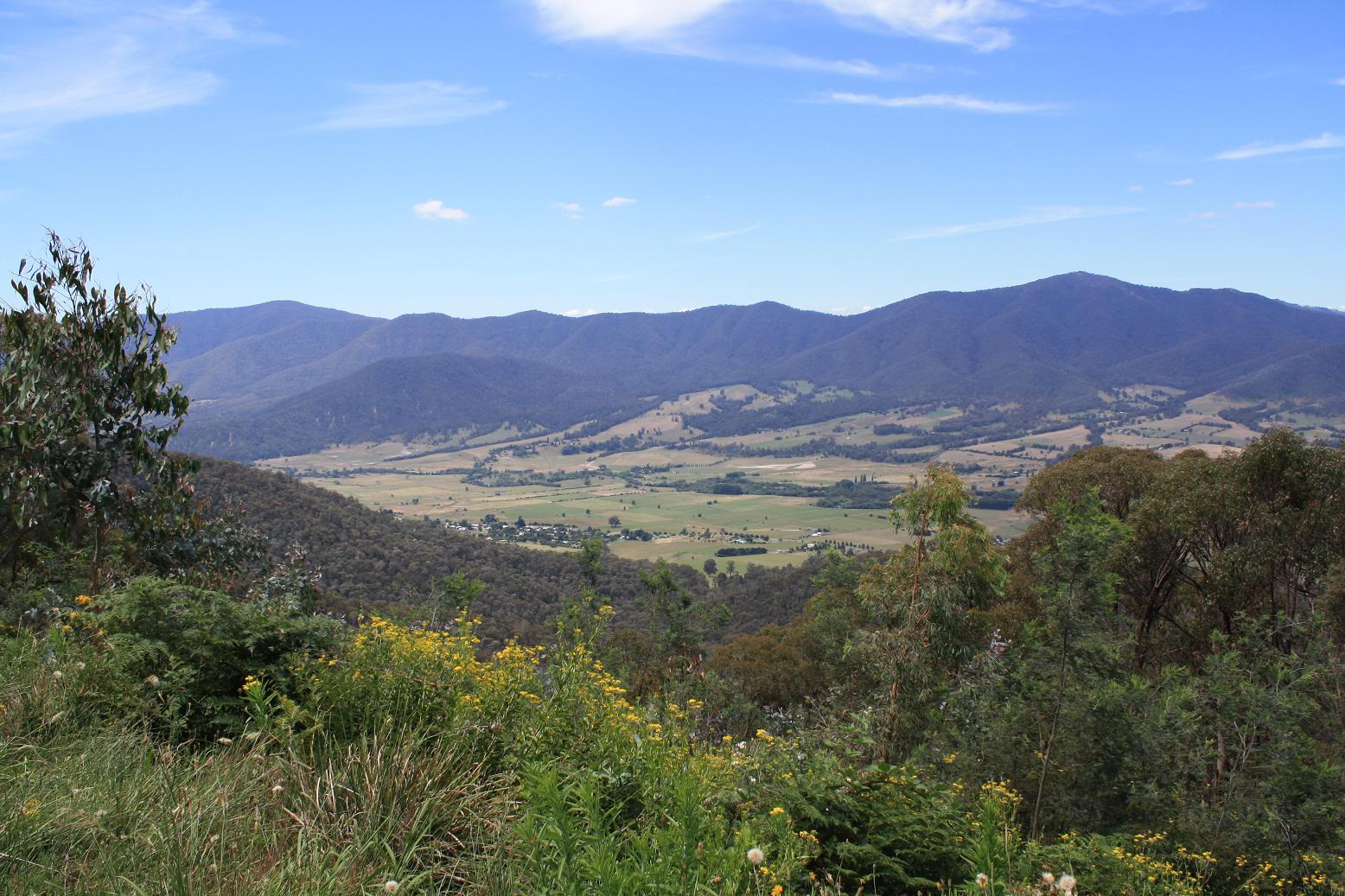 It’s been a couple of days since I returned from my Victorian Alps expedition and I’ve had some time to reflect on the trip as a whole. Overall, I’d have to say that the trip was a success – I got some terrific rides in and had a great time, but there were a few less-than-perfect moments too.

On Boxing Day I got  on the road at around 11am and started the long trek east toward Bairnsdale. In previous visits to the Alps I had always based myself in Bright or Porepunkah but this year I was starting with something a little different – the remote alpine town of Omeo. I arrived at around 5pm, set up camp, had dinner and being the super-cool person that I am, went to bed at around 8.30pm. 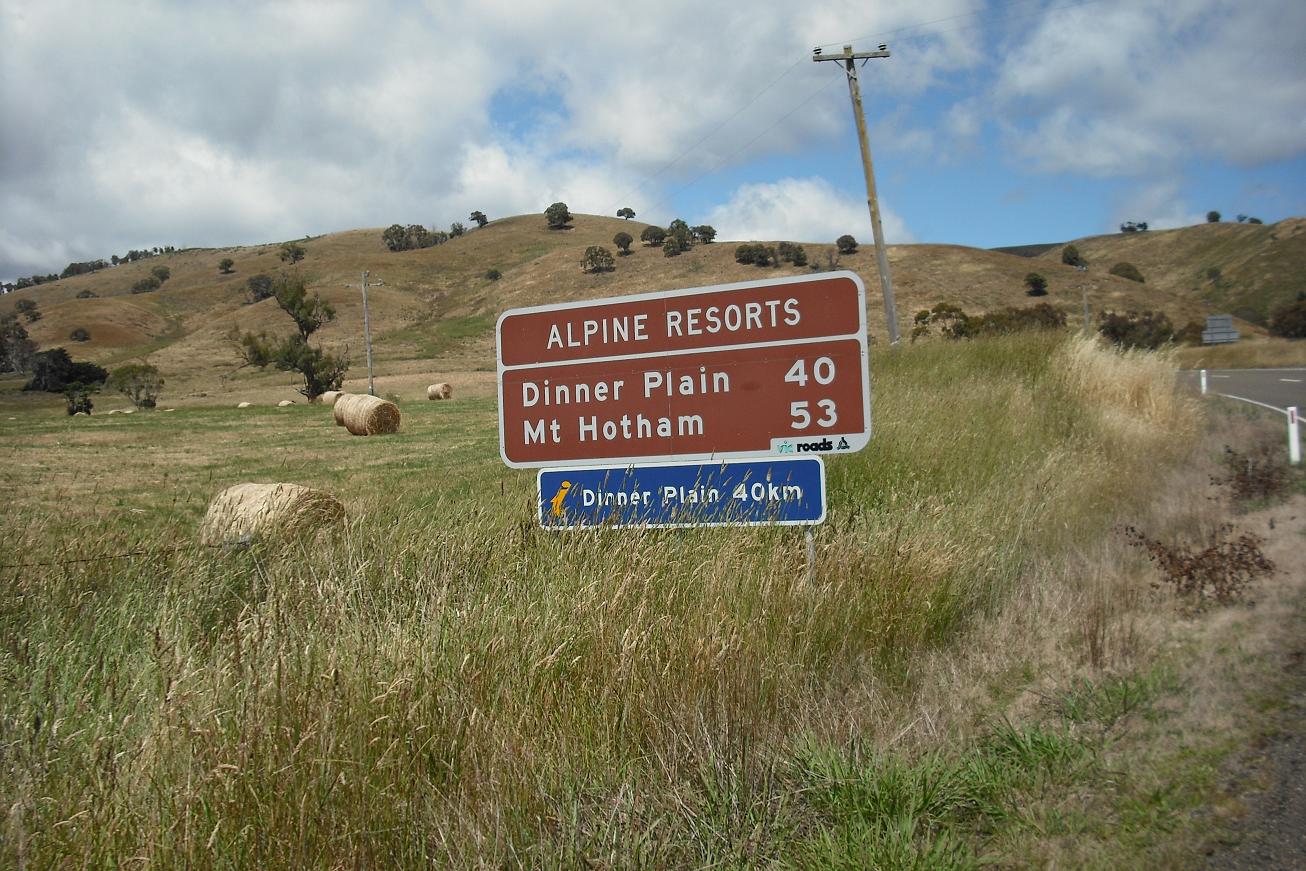 The following morning I got the bike set up and then set off on the first of three rides for the trip – the Dinner Plain ‘climb’. I say ‘climb’ with a certain amount of hesitation because while Dinner Plain certainly sits at a higher altitude than Omeo, it’s definitely not a sustained climb, which is a good thing given that it’s 45km from start to finish.

Overall, I’d have to rate this ride as one of the least enjoyable cycling experiences I’ve ever had. The road surface was ordinary, the temperature was uncomfortably high and the climb itself was fairly boring. Perhaps worst of all was the fact that I had been sick the week before coming up to the Alps and, if I’m honest, I probably didn’t give myself enough recovery time. As a result I felt weak throughout the ride, felt like I was going to lose my breakfast on more than a couple of occasions and had to stop more times that I’ve ever had to in 90km. 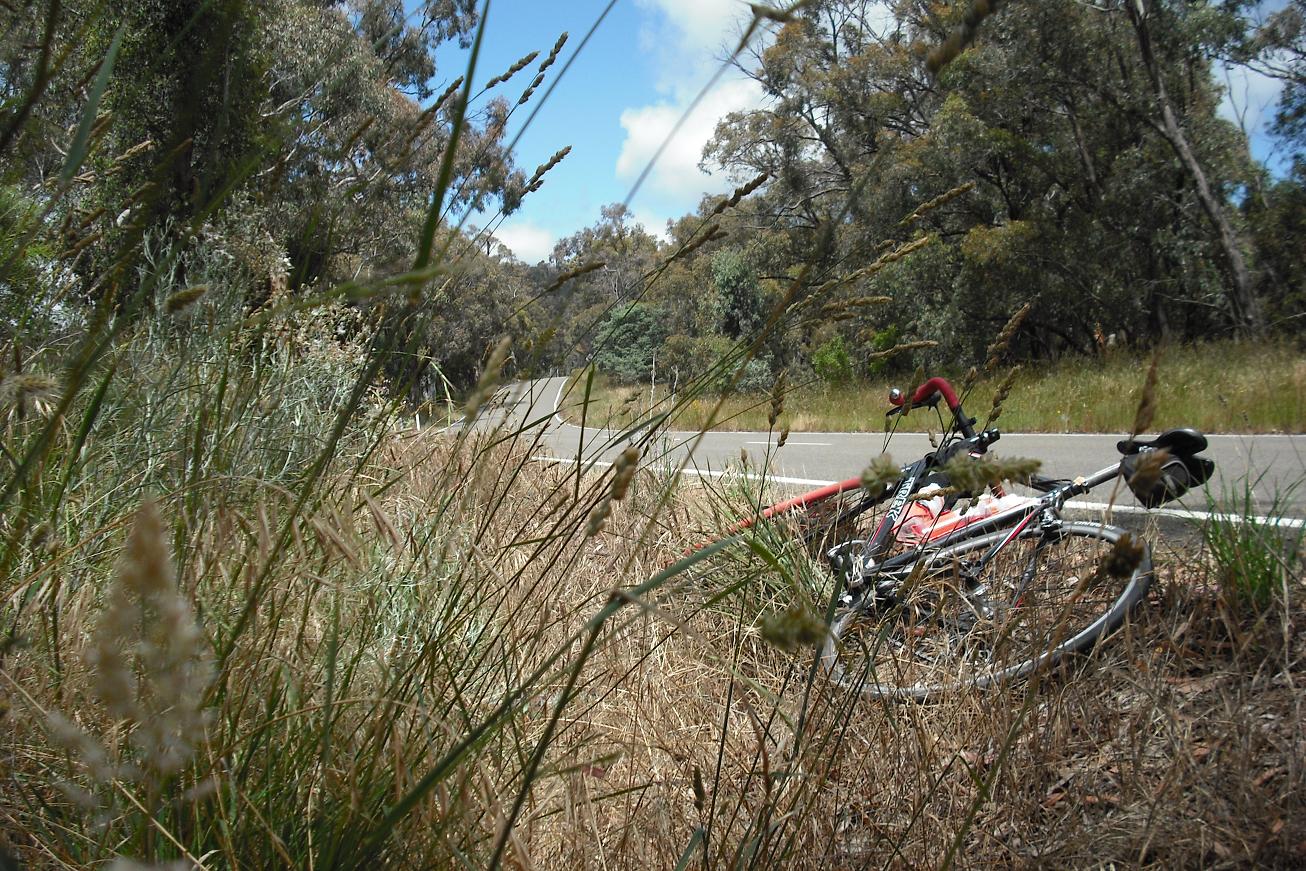 And that’s all of the whinging out of the way. I must admit that it was quite satisfying to reach the Dinner Plain Alpine Village after a couple of hours of ‘climbing’ and it was even more satisfying getting back to the caravan park.

The following day I had planned to try my luck on the Back O’ Falls climb in preparation for the 3 Peaks Challenge but after the efforts of the previous day, I was in no shape to ride. I guess I mustn’t have recovered from my illness as much as I thought because that morning I felt like I’d been hit by a bus. But the day wasn’t totally wasted – I packed the car and retraced my steps from the following day, documenting the Dinner Plain ‘climb’ for the site. 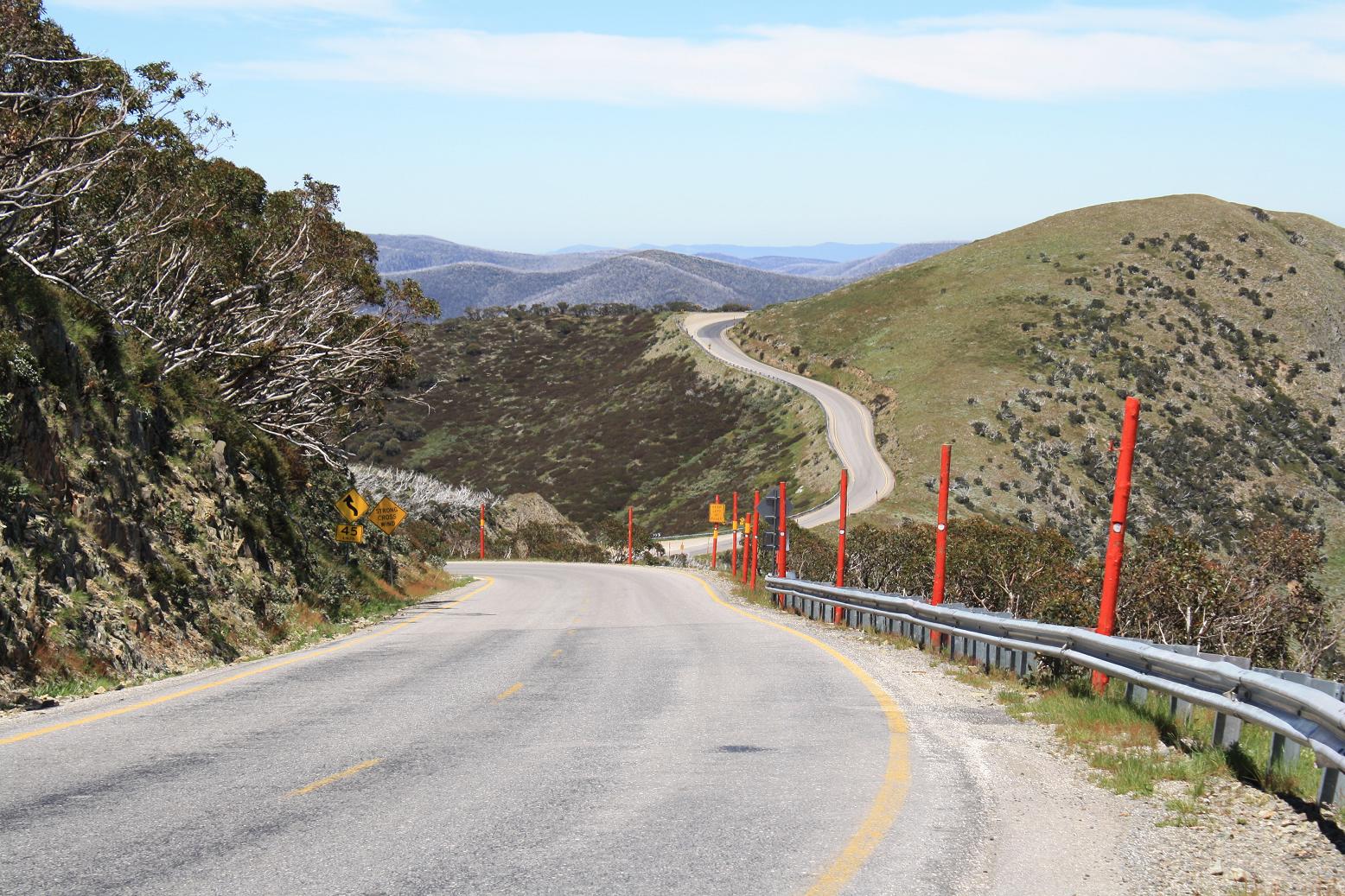 Having reached Dinner Plain I continued on to Mt. Hotham and then through to Bright for lunch. Normally when I come up to the high country in February or March, Bright and the surrounding towns are mostly empty. Not on this particular visit, thanks to school holidays. It must also have been footy trip season or something as Bright and Mt. Beauty seemed to full of ‘heroes’. You know the ones; guys that travel together in big groups and drink copious amounts of alcohol in public places with their shirts off. The sort of guys that like to swear loudly and call each other ‘faggot’ before wrestling each other on the ground in an ironically homoerotic fashion. 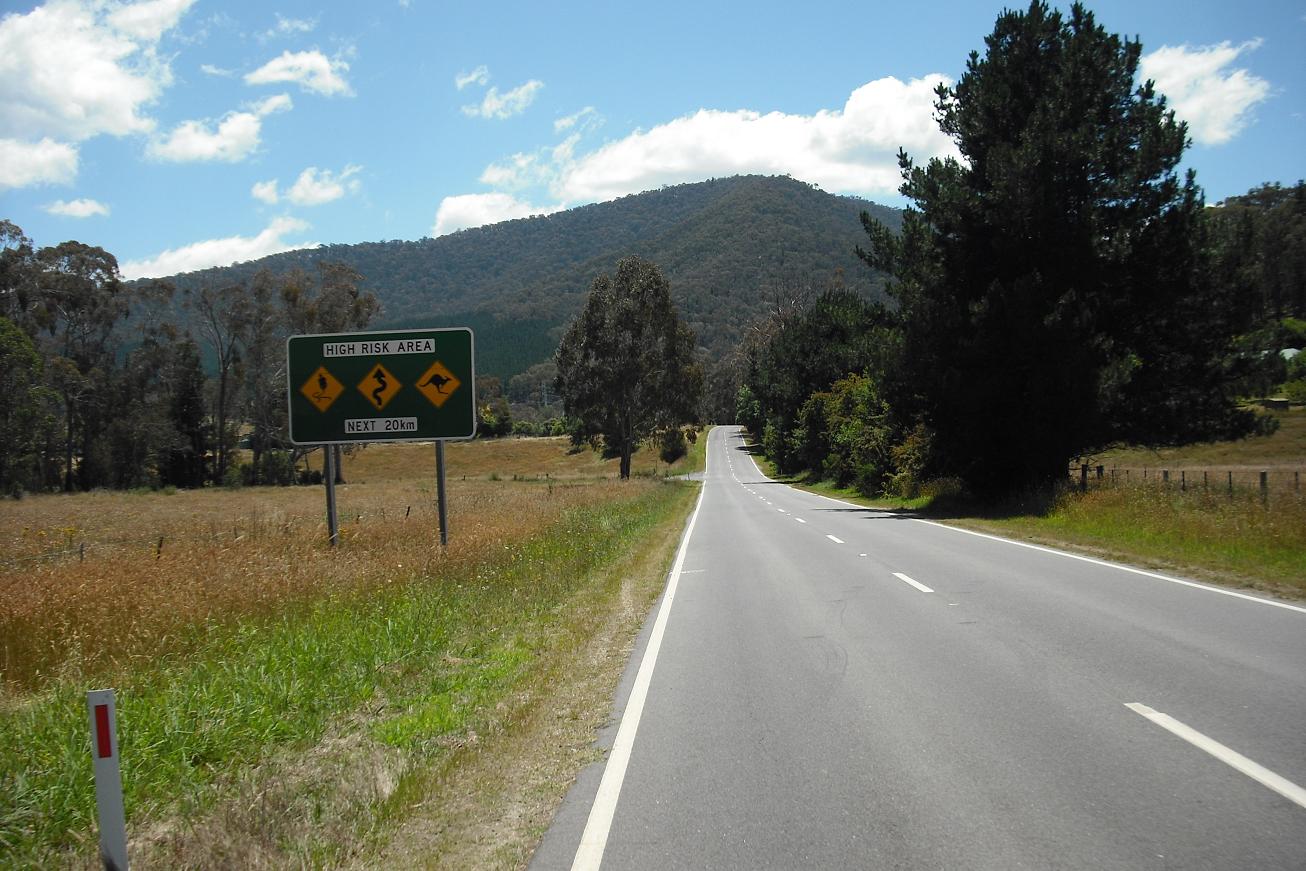 The following day, Wednesday December 29, I set off on my second ride of the trip and unlike my first effort, this ride was a particularly enjoyable one. I headed out of Mt. Beauty and straight up the Tawonga Gap, a little worried that a lack of warm-up would mean burning out on the way to the Gap. Luckily I made it to the top of the lovely climb with no troubles and barrelled down the other side and into Bright.

After a bite to eat by the Ovens River I decided against my original plan to attempt Mt. Buffalo, telling myself that although I was feeling better than the other day, there was no point pushing it. Instead I climbed back over the Tawonga Gap, pushed through Mt. Beauty and into the start of the approach to Falls Creek. I wasn’t keen to do the whole climb but felt strong enough to do the initial 4km climb out of Mt. Beauty – a climb that I’ve named ‘Little Big Hill’, given that the top of the sealed section is the start of a bigger climb to the aptly named Big Hill.

After rolling back into Mt. Beauty I got my stuff together and drove toward Falls Creek so that I might document that particular climb, and the ‘Little Big Hill’ climb for the site. 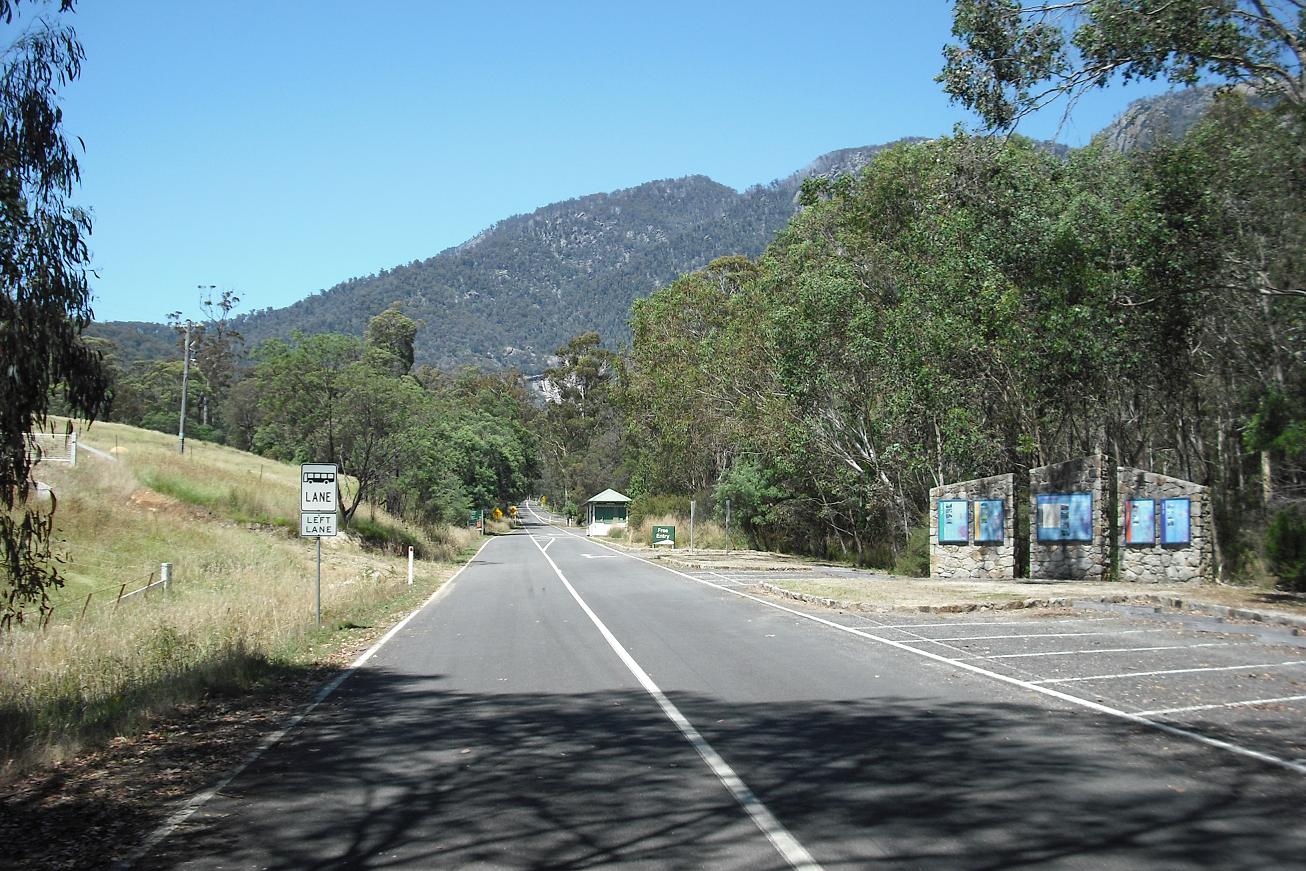 The next morning I decided that I would head for home a day earlier than planned, given that I’d documented the climbs I had planned to and I’d gotten a couple of good rides in. Before heading south though, one last climb was in order.

I packed up the camping gear and headed across the Gap to Porepunkah where I parked the car in a shady patch near the Buckland River. It was around 33 degrees outside but I was keen to face Mt. Buffalo once again, a climb which I remembered to be quite easy but which, on the day, turned out to be rather difficult. Perhaps it was the heat or the fact that I wasn’t as fit as the last time I came up here – either way, it was a slow grind through the 20-0dd kilometres of solid climbing and I was quite relieved when I got to the lake. After rolling back down the 30-minute descent I packed the car and started the long trip back to Melbourne. 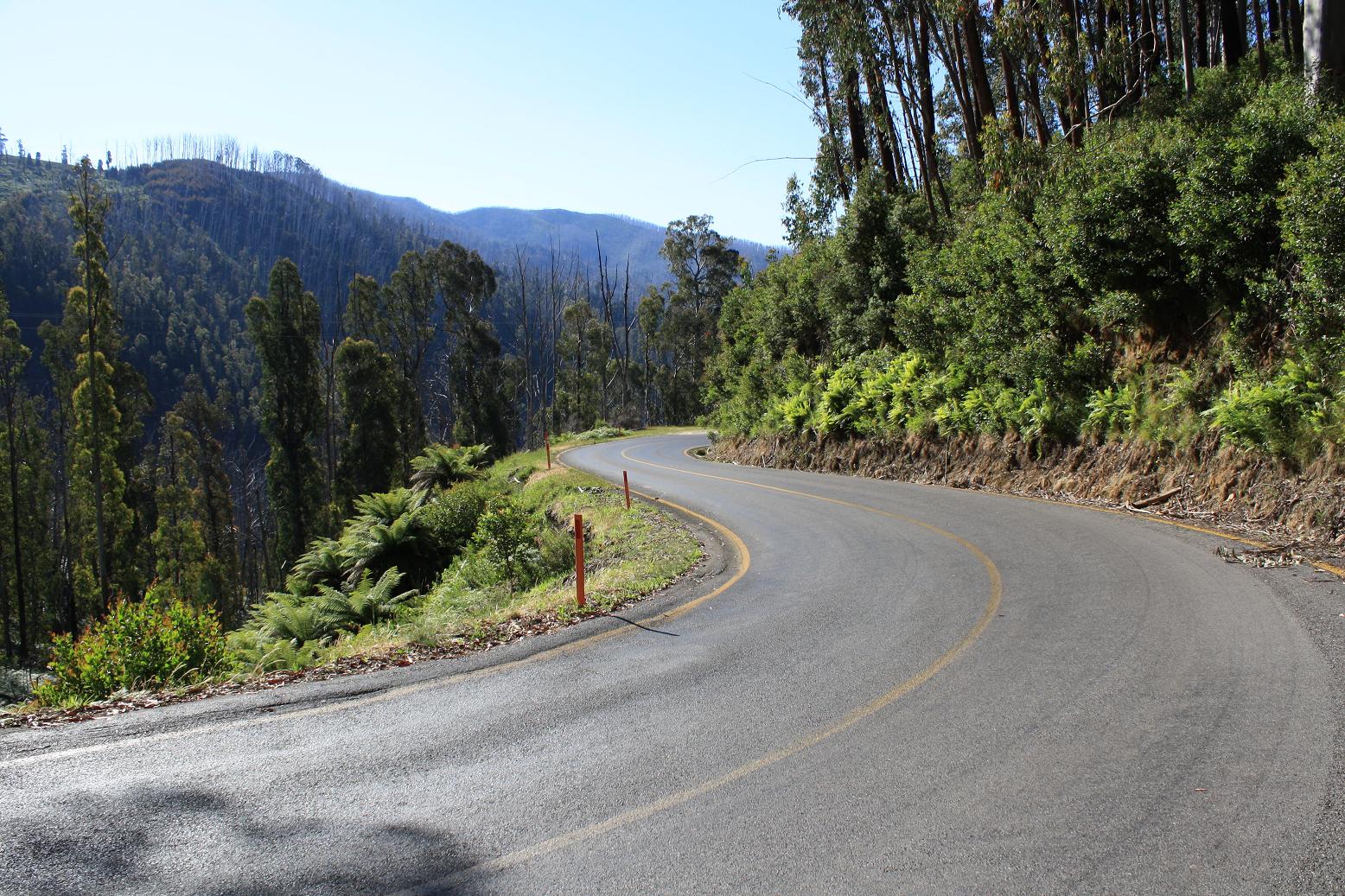 Overall it was probably a positive trip. I got over 200km of cycling done, spent 10 hours in the saddle, enjoyed some relaxing time in the fresh air of the Victorian high country and managed to document three more climb for this here website. On the flipside, I didn’t manage to attempt the Back o’ Falls climb like I’d planned and I probably didn’t do as much riding as I probably could or would have had I been in better health.

I think sometimes I’m probably a little unrealistic when it comes to assessing my own cycling ability. While an attitude of ‘I’ll be right’ is positive and helps to motivate oneself, it doesn’t help all that much when you’re feeling like death in the middle of nowhere, halfway through a climb that you started without a warm up. Similarly, the thinking that ‘I’ve done this climb before, I can do it again’ is a little shortsighted given that it doesn’t take into account one’s fitness or amount of training in recent times. Still, it’s good to aim high I guess.

I’m hoping that I’ll get a chance to visit the High Country again before the 3 Peaks Challenge so that I can do some longer rides when I’m a bit fitter. Now that the new year has come along, I should really think about ramping the training up to give myself the best chance of finishing the beast that is the 3 Peaks Challenge. If the event was tomorrow I can confidently say that I would probably chuck in the towel after reaching Mt. Hotham (if I got that far) but hopefully the training will continue and in a little over 2 months time I’ll be able to provide a more optimistic outlook.

Before I go I just wanted to say a big Merry Christmas and Happy New Year to everyone that’s been following my training over the last few months. I hope 2011 brings you all manner of happiness and success. Receiving a 3 Peaks finishers jersey on March 13 will go a long way to making me feel like I’ve had a good 2011.

Thanks for reading and don’t forget that you can join the banter on Facebook and Twitter just by following the nifty links in the top left of the page.