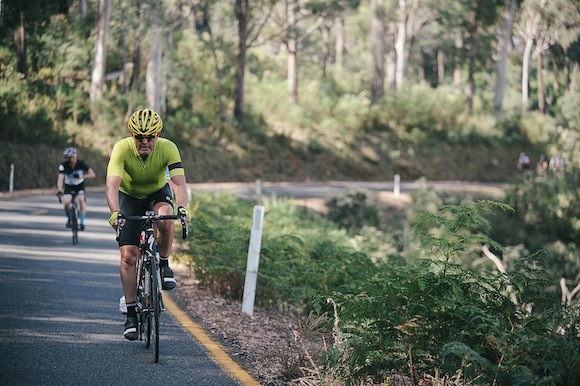 This is the third of four blog posts about a recent trip to the Victorian Alps for the Domestique 7 Peaks Series. You can read part one, about our Falls Creek ride, here, and part two, about Mt. Hotham, here. Stay posted for the remaining instalment.

I’ve climbed Mt. Buffalo plenty of times in recent years, many of them while heavily fatigued. That’s certainly been the case for the past three summers when Mt. Buffalo has been the third of four climbs in a very busy weekend of climbing for the Domestique 7 Peaks Series.

Coming into this summer’s ride I was keen to be as fresh for Mt. Buffalo as possible. The past two years I’d suffered like a dog in the heat and I was keen to make things a little easier for myself this time around.

Climbing Mt. Hotham earlier in the day I’d started to get a little bit of ITB pain, which didn’t bode particularly well for Mt. Buffalo. I was just hoping that a good rest between rides would mean I’d be able to tackle Buffalo pain-free. 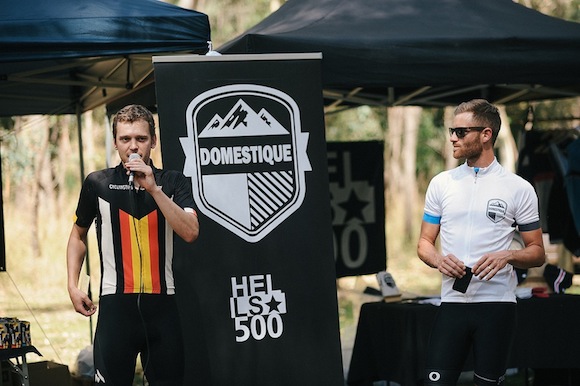 My good mate Nick had come up to the high country earlier in the day to join the group for the Mt. Buffalo climb and it was great to see him. Particularly keen readers might remember Nick from the four-day bikepacking trip we did in the Otways in early 2014.

I knew it was always going to be a stretch to keep up with Nick on the climb. In addition to having fresh legs he’s got a ridiculous base fitness, built on several years of racing at B-grade level while at Melbourne University (without mentioning his marathon running). Nick humoured me for a few kilometres, sticking with me on the early slopes as the ride got underway, but before long he was disappearing into the distance, riding at his own pace.

After 6km of climbing I found myself thinking “woah, I actually feel ok. I could get through this alright”. It was a great realisation as I vividly remember how hard it was dragging my aching body up to Dingo Dell a year earlier. Sure enough though, no sooner had I decided I was feeling great than I was hit by a hunger flat. And a big one. 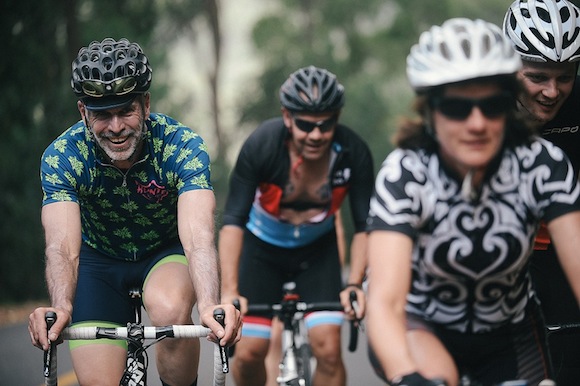 I’d had a big lunch back in Bright between the rides, but obviously not big enough. In the space of 1km I’d gone from feeling great and enjoying the climb, to feeling like death on two wheels.

I rifled frantically through my jersey pockets to see how much food I had with me. There were still 15km to go and I was tempted to save some food for further up the road, but at the same time I figured I mightn’t get further up the road if I didn’t get some food into me. 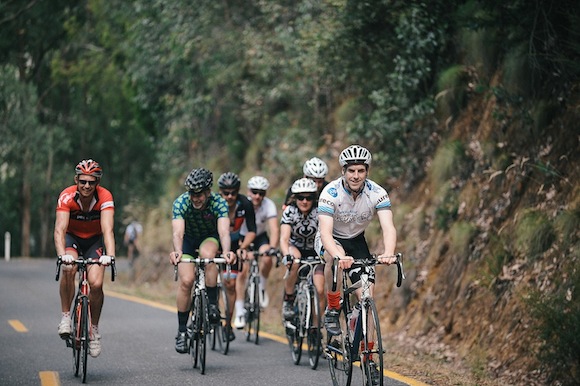 It’s going to sound like I’m just plugging our sponsors here, but the drinks stop halfway up the climb came at just the right time. A quick bidon of Sukkie really hit the spot and gave me just enough energy to keep going.

With new-found energy I started to enjoy the climb again. I certainly wasn’t climbing fast, but I was moving forward comfortably and had no doubts about finishing. My morale was boosted further when I caught up to another rider, Jeff (or maybe Geoff?), and spent some time riding with him. Something as simple as a few kilometres of company makes the climbing that little bit easier, and it wasn’t long until we were reaching the top of the sustained climbing after 18km. There were just 5km to go to Dingo Dell.

The final kilometres to Dingo Dell are undulating with some flatter sections and a bit of climbing, but most of the hard work is done by the time you reach that crest at 18km. In the end I rolled into the Dingo Dell cafe about 10 minutes faster than I’d done the year before. Again, there was nothing fast about the ride at all, but I was glad to have gotten through it in one piece. 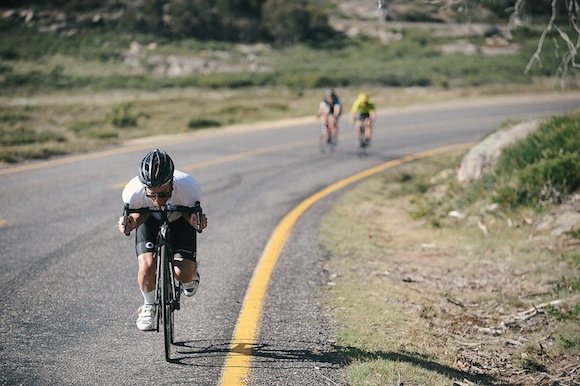 I’ve always maintained that Mt. Buffalo is my favourite descent anywhere. It’s all about the beautifully consistent gradient, the lovely sweeping corners, and the helpful sight lines which allow you to scout out the road ahead and use more of the road when safe to do so.

Any pain and discomfort from the climb (and my ITB had been fine, thankfully!) was quickly forgotten as Andy and I began the descent together, bombing down the mountain, flying around the bends. When you enjoy climbing it can be easy to forget that the way back down can often be the most enjoyable part. And this was every bit as enjoyable as any descent has ever been. Perfect weather, perfect conditions, no cars. Bliss.

And then my left foot came unclipped at about 55km/h. 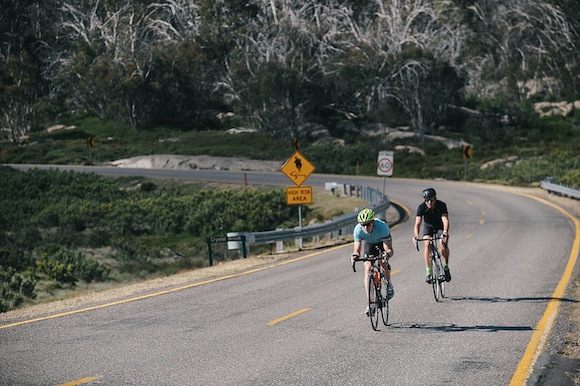 It gave me a big fright the first time it happened. I was never in danger of losing control of the bike, but I certainly wasn’t expecting it. Over the next few kilometres my cleat kept slipping out of the pedal and that initial fright turned to frustration. It seemed to be coming undone when I pedalled, meaning I’d have to roll down the mountain rather than pedal down.

It didn’t take me long to realise that it was probably more important to get down the hill safely, rather than worrying about how fast I could go. The more I thought about it the more concerned I became. What if I was going around a right-hand bend, with my left leg extended, and my foot came loose? Would I lose control?

I spent a long straight section finding foot positions that wouldn’t make the cleat come loose. This allowed me to continue the descent confidently, albeit slower than I was hoping.

A quick inspection at the bottom of the mountain showed that the front tip of my cleat had come away, meaning it wouldn’t stay in the pedal as designed. I would have to find a replacement set of cleats if I wanted to ride the following day. 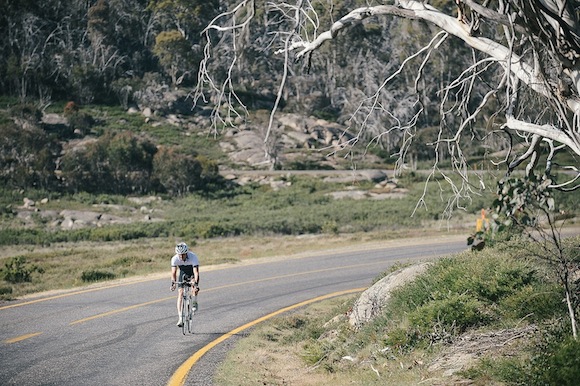 Heading back to Bright for dinner the decision to stay in town (vs at Falls Creek as in previous years) again proved to be the right one. Last year we’d had a 90 minute drive back to the hotel at about 10pm after two long rides and having been up before 5am. This time around we simply walked around the corner to bed. Perfect.

With two days and three climbs now complete, there was just one climb left to tackle: the long and challenging ascent to Dinner Plain.

A big thank you to the amazing volunteers who helped us out on this ride: Sharon Ridgway, Tammy van Bergen, Nick Hansen, Sarah Hammond and Dr Ryan McMullan. Thanks too to our Series sponsors: Winners Nutrition, CycleCover, Sukkie Hydration and Tourism North East.
All photos in this post appear courtesy of Caz Whitehead. You can find more photos from the ride here.