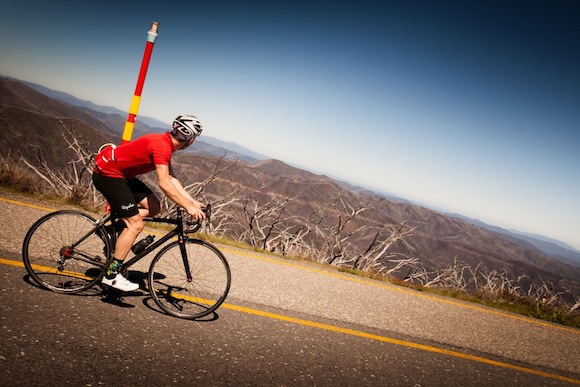 This is the second of four blog posts about a recent trip to the Victorian Alps for the Domestique 7 Peaks Series. Part one  can be found here. Stay posted for the remaining instalments. You can click on any of the images below to see larger versions.

The second day of our trip to the Victorian Alps was always going to be the hardest. Climbs of Mt. Hotham and Mt. Buffalo were both on the menu and with the first of those starting at 8am in Harrietville, it meant a 5am start to get there from Falls Creek and to set up.

After our pre-ride briefing at 8am we sent the first waves of riders up the road. While Robert Merkel had volunteered to ride lanterne rouge — the last rider on the road, to ensure no-one got left behind — I was still keen to leave near the back. Doing this gives me a chance to work my way through the field, saying hi to people as I go. 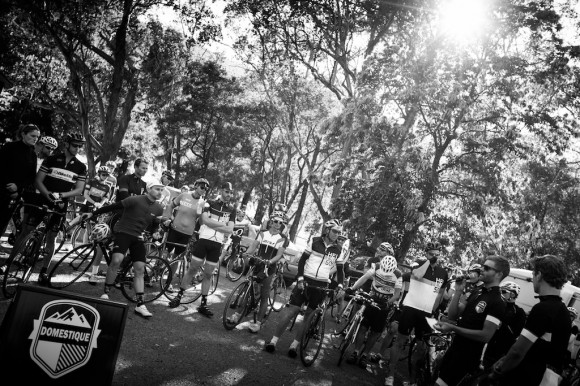 I set off with my series co-organiser Andy van Bergen and Paris Pollock but before too long the pace (although gentle by their standards!) became uncomfortable. I was still concerned about my knee and what would happen if I pushed it. Plus, I still had the Buffalo climb that afternoon and Dinner Plain the following day to go.

Roughly 5km into the climb I saw Hells 500 rider/photographer/videographer Nigel Welch standing by the side of the road, his front tyre sporting a large gash. He was waiting for some support from further down the mountain but the solution came a few kilometres up the road. 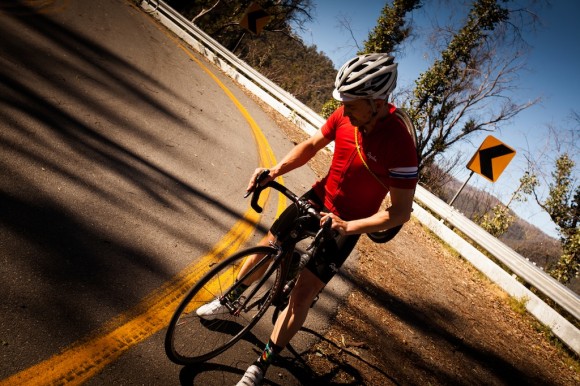 I was riding with Dom Cryan, partner of our terrific series photographer Kirsten Simpson, when we reached Kirsten who was taking some photos by her car at The Meg.

Dom, having seen Nigel earlier, and knowing he had a spare wheel in the car, ocky strapped the wheel to his back and rode down the hill to meet Nigel. It was a great moment of quick thinking and selflessness from Dom that I’m sure Nigel was most grateful for. 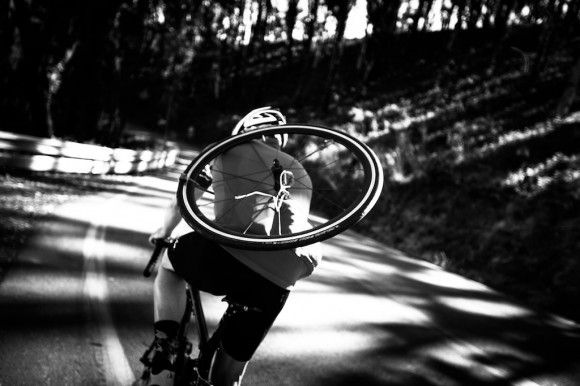 I continued on, chopping through the first of three sections on the Mt. Hotham climb and reaching the false-flat. I’d spoken in the pre-ride briefing about this section of the climb being good to spend with a group, as the lower gradients mean you can get some aerodynamic advantage from drafting.

I spent my time jumping between a couple of groups, chatting here and there and saving my energy for the tough final 10km of the climb. I definitely wasn’t pushing myself on the climb (as I had been last year while trying to hold Greg Henderson’s wheel) but I knew that steep ramps like CRB Hill and the Diamantina were going to hurt regardless. 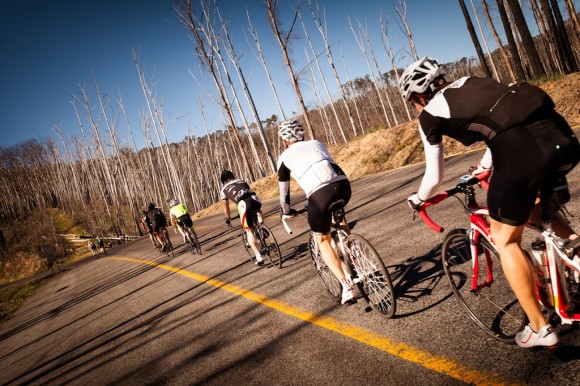 While Mt. Baw Baw is almost certainly the hardest of the 7 Peaks Mt. Hotham is a very close second in my opinion. Those closing kilometres are very tough and with nearly 30km of climbing in your legs before you hit the final ramp, fatigue plays a significant role.

But Mt. Hotham is also one of most picturesque of the 7 Peaks. I love that moment when you end the false-flat section, you climb that steep rise and you pop out above the treeline, on the famous moonscape. The views suddenly open right up and you feel like you’re on top of the world. I don’t know of anything quite like it in Victoria. 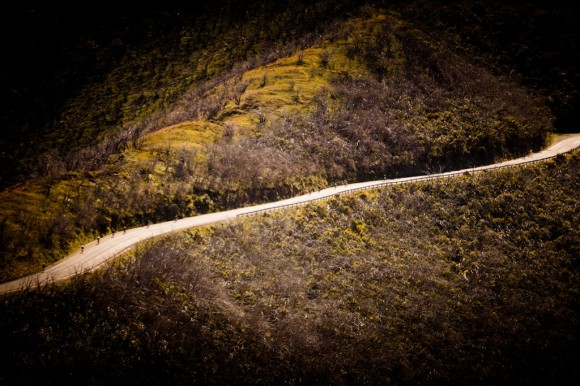 As I approached that section I heard Andy on the two-way radio say that there were strong crosswinds on some of the exposed sections ahead. He wasn’t wrong.

On those two brief descents in the final 10km the wind was howling up the valley and across the road making things a little treacherous. The worst section came just before the second descent on a flat bit of road. I don’t think I’ve ridden in stronger crosswinds than that.

You found yourself leaning into the breeze just to stay upright, just hoping that if the wind dropped suddenly that you had the time and the poise to right yourself before you hit the deck. 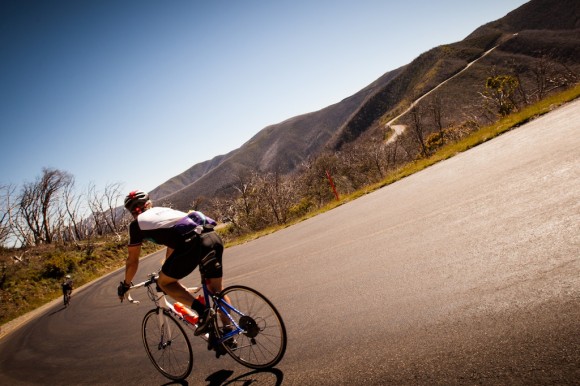 Andy made a great call by stopping just before that nasty crosswind section and warning the approaching riders. When I passed through I saw a number of riders by the side of the road, some waiting for the wind to subside, others just scooter-ing their bikes, one foot unclipped, just to gain some semblance of control.

But as far as I’m aware, everyone got through the crosswinds and were able to tackle the steep final pinches unscathed. 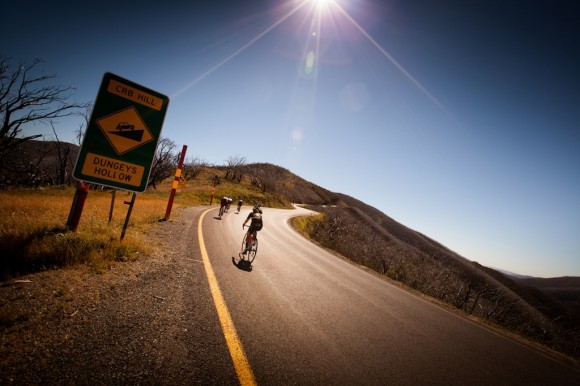 For some reason I actually felt stronger on the steep ramps like CRB Hill than I had done on the gentler ramps. Sure, it’s never easy climbing at 10%+ for more than a kilometre, but I think on that particular day we had a bit of a tailwind up CRB and I was feeling good.

I spent the final kilometres of the climb riding largely alone but chatting to various people I came across along the way. Everyone was in their own little world, soaking in the amazing surrounds while suffering on some very challenging slopes.

I got to the top feeling excellent. My knee had behaved itself and the gentle pace I had adopted all the way up left me feeling fresh and comfortable at the summit.

I spent close to an hour there at the summit, chatting to relieved and satisfied riders as they rolled into the village, and waiting for Robert, our lanterne rouge, to arrive with the last riders. After helping our amazing volunteers (Brian, Maria and Linda) to pack up I started the long descent back to Harrietville.

Once at the bottom I drove on to Bright Velo for some much-needed lunch and to chat with the riders and our amazing volunteers. It was great to be able to sit down and relax for a few moments before the afternoon session began out at Mt. Buffalo. 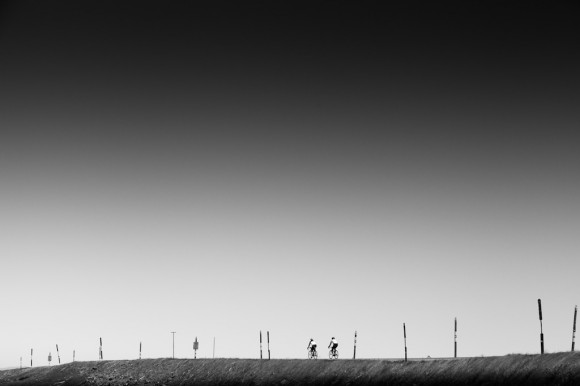 Having done two mountain climbs in 24 hours Mt. Buffalo was always going to hurt, but I didn’t expect it to hurt as much as it did.

A big thank you to all of the amazing volunteers who helped us out on this ride: Sharon, Tammy, Maria, Brian, Linda, Nigel, Robert and Dr Carl. Thanks too to our sponsors: Croydon Cycleworks, Winners Nutrition, CycleCover, Nemisis, Hammer Nutrition and CyclingExpress.com.

We’d like to say a big congratulations to Paula Cumbo who wins the CyclingExpress.com voucher for the most inspiring effort on the Mt. Hotham ride. Paula was one of the unlucky riders who came off during our Mt. Baw Baw ride. To see here back on the bike, and back riding mountains (up and down!) was very inspiring. Well done Paula!

All of the amazing photos you see in this post were taken by Kirsten Simpson. To download low-resolution versions of any of the photos Kirsten took at Mt. Hotham, head here and use the password “HothamBunch”. You can support Kirsten’s great work by buying a high-res version of any image for just $7.95. She took more than 300 shots on the ride and it was a real struggle narrowing them down to just 20-odd!

You can see my Strava file from the ride here. A full list of finishers can be found here. If you completed the climb but forgot to write your name down, send an email to Matt with a link to a Strava file or equivalent and I’ll add you to the list.