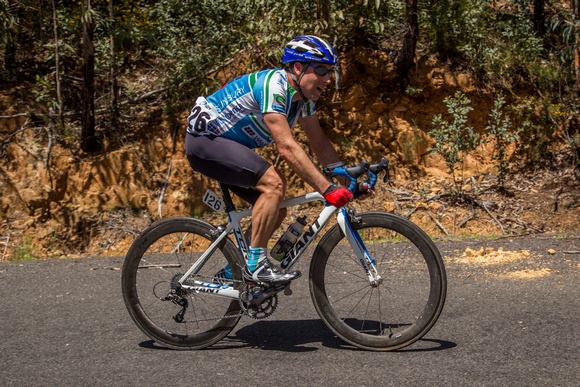 Earlier this week we brought you an interview with the winner of men’s A Grade at Stratford to Dargo, Brendan Canty. Today, we’ve got a great piece by Robert Merkel who shares the story of his years-long battle against the epic Dargo climb and how he tackled it at last weekend’s Stratford to Dargo.

If you’re a regular reader of The Climbing Cyclist you’ll probably have a cycling goal in mind at any given time. An ascent of Mt. Dandenong. A crack at one of the 7 Peaks, perhaps accompanied by our blog host and the Hells 500 crew. Having a crack at a race. The Alpine Classic, or 3 Peaks. The Tour of Bright. Completing the Vuelta Skelta in one hit.

My springtime goal for the past four years has been simple – the best finish I can manage in the Stratford to Dargo.

This race has haunted me since its inaugural edition in 2009, where on a hot November day a pimply-faced youth — one Alex Morgan, now a world junior track champion — attacked us relentlessly. Forming a grupetto of two after being dropped on the first big climb of the day, myself and my new-found friend, Kade from Albury-Wodonga, worked our way slowly through the increasingly stunning scenery and thought we should be able to grind out the climb, which nobody racing had ever seen before.

As soon as we hit the climb we were faced with long stretches at 15%. My legs were gone and it was all I could do to walk the steep stretches – with my heartrate monitor still showing something in the 160s as I did – in the hope that somewhere, eventually, the climb would ease off again.

And then I came across a mate who couldn’t even do that any more, sitting next to his bike. That was more than enough for me. After a few minutes, we turned around and rolled back down the hill together to the Dargo Hotel, where I put away a Gatorade and three bottles of water in about 10 minutes.

Beaten by the heat, an unexpectedly tough final hill and especially a lack of water, I was determined to give the race another crack.

The 2010 edition saw more heat, Miranda Griffiths (from this fantastic photo) in our bunch (and smashing it up the final climb), more walking, but, finally, a race finish.

In 2011 the derailleur and chain wrapped itself around my rear wheel 30km in. And 2012 saw the race cancelled after a 4WD club decided to hold an event on the same day.

But I was set for 2013. A dinner-plate-sized 32-tooth rear cassette and long-cage rear derailleur were ordered, fitted, and thoroughly tested. I did slow-cadence ergo sessions during the week. I did slow-cadence ascents in the Dandenongs on the weekend, under the watchful eye and encouragement of my coach Andrew Hutcheson. I was as ready as I’d ever been for the challenge.

We rolled out of the Stratford Tennis Club on a blissfully, pleasantly cool Sunday morning, with the Masters C bunch. Graded Masters racing is new to Victorian state opens this year, and has made the Masters bunches much more competitive. Even at Masters C level, the pace has been pretty hot and as we screamed along the relatively flat first few kilometres it felt like it was going to be a very tough day. I sat in, leaving whomever was pushing the pace to their own devices.

Some 20km in, as we turned on to Beverleys Road, the first surprise appeared on the horizon – Masters B, who’d started five minutes before us. I faintly hoped that this would encourage détente, but no – the front of the bunch kept powering on, past the main Masters B bunch and then past a lone Masters B leader.

It was the last I’d see of B grade for a long, long time; it was also the last we’d see of flat roads for quite a while.

Beverleys Road looks innocuous enough from the race profile, but an aptly-named Strava segment sums it up – a rollin’ roller coaster that would do an Ardennes classic proud.

Finally, we reached the Dargo road turnoff, and soon after, the wheel-eating wooden bridge where they neutralise the race and we scoot gingerly across.

Hostilities resumed, and soon after (if I’m recalling correctly) the rubber band finally broke on one of the climbs, and three went away. The pace slackened a little, but not a lot.

The first big climb of the day is a long but not very steep grind, vaguely reminiscent of a pre-2009 Humevale Hill in both profile and scenery, with a couple of extra kilometres tacked on the end. It was teeth-gritting territory, as the stronger riders kept the pace up in the hope of not letting the break too far up the road.

But a surprisingly large group of riders crested the hill together and a different challenge presented itself — hurtling down a twisty, narrow, occasionally-bumpy descent at 60km/h.

Thankfully, everyone got themselves down in one piece, and by the time we all regrouped at the bottom a ceasefire of sorts had broken out. The pace remained solid, but manageable, all the way through the feed zone, down a near-perfectly-straight descent on which riders reached well over 80km/h, and along the banks of the picture-postcard-worthy Dargo River. We caught two of the breakaway riders; one was still away.

The next part of the plan was a bottle of water from the neutral supply in Dargo. Despite the relatively cool day my two bidons were nearly empty and the sun was coming out for the climb. Despite little practice at the fine art of grabbing a bottle on a moving bicycle, I managed this without incident. A couple of others missed, leaving bottles splattering water on the road. We also got an update from the commissaire – the lone breakaway rider was seven minutes ahead.

Prominent climbs all have their marker points. The Dargo hillclimb’s is hidden until you hit it; it’s announced with a simple road sign, a pictorial “steep grade” sign. They’re not kidding.

At this point, the Dargo race really begins, or ends. There are no tactics. The riders around you are irrelevant; you go as hard as you can maintain without going into Phil Liggett’s “red zone” too early.

The leaders inched away. I didn’t care. Some might blow up. Some might not. Either way, I was going to climb the hill as best I could.

The 32-tooth cassette and compact chain ring at least meant that I could maintain some approximation of a sensible cadence on the hellish first four kilometres. I felt rotten; the power meter was showing some pretty embarrassingly low numbers, but at least I was still going.

A few Masters B-graders passed by, including Matthew Marques, whose personal story of recovery is well worth a read. I inched past a competitor, yo-yoing at single-digit speeds before finally dropping him as the steep first four kilometers of the climb finally came to an end.

For the next five kilometres or so, the climb eased up, but I was pretty cooked and a little under-watered; not nearly to the extent of 2009, but dry nonetheless. Attempts to get out of the saddle produced instant cramps, but I knew I was going to need those legs later so I threw it back in the 32 and tried my best to pedal the tightness out of those muscles, before sitting back down. It, and the yawning pace I was setting, seemed to work, and I had at least some hope of getting up The Wall.

After what seemed like forever, there was the short flat section, the horse dam … and there it was. The boss level of every computer game you’ve ever played. The Wall, extending to the sky as I rolled a sore neck up to look. Only a few hundred metres. A couple of minutes of pain. I could do that and, heck, there was one of my competitors stalled on his bike. I could even make up a place! C’mon legs, don’t cramp like that guy.

Beautiful day for #s2d13. Riders went faster in response. Happy with 9th in MMASC. Put this race on your bucket list.

OK. First the left leg. Then the right leg. Yeah, this hurts. But not too badly. I can do this! I’m going to make it! I passed my stranded competitor. I kept going. I kept going some more. And The Wall was over … leaving a few hundred metres of more moderate climbing to go.

A quick glance over the shoulder to make sure nobody was behind, a kick into a less ridiculous gear and there’s the timing wire. Over. Now, where’s that Esky with the water in it???

It wasn’t until the bus back that I was able to confirm that my pre-race hope of a top ten placing was achieved, in ninth. I was 20 minutes behind the winner Brett Stieszkal – who had taken another three minutes out of second placegetter Rod Upton on the climb to win by an amazing 10 minutes.

I hadn’t done everything right – I should have popped a third water bottle in my jersey pocket, despite the cool temperatures. But I’d given it everything I had, and I’d achieved my goals; a top ten finish in a very competitive grade, and, equally importantly, not walking one centimetre up that bloody Dargo hill. And in a year that’s been pretty trying personally, that was very, very satisfying.

But, I can’t help thinking I can do better if I get the hydration spot-on, and drop a couple of kilograms.

If it’s not completely obvious, I reckon this a wonderful race. Along with the Baw Baw Classic it’s the ultimate test for climbing cyclists in Victoria. Congratulations to the tiny Wellington Cycling Club who put this event on each year.

You can check out Robert’s Strava file from the race here. Click here to see the results from the 2013 Stratford to Dargo.

If you’ve got a climbing-related story you’d like to share, whether that’s from a race, a challenge ride, or something else, get in touch — we’d love to hear from you.