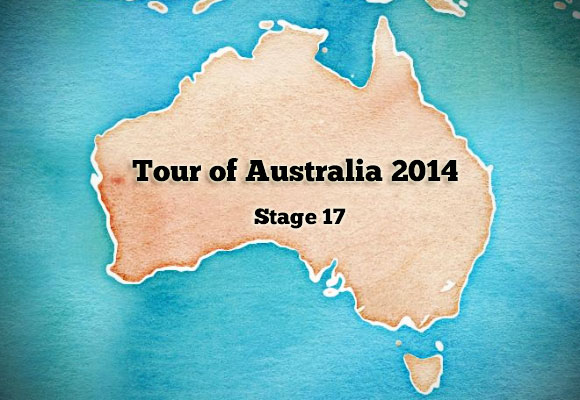 Inspired by the Giro d’Italia, the Tour de France and the Vuelta a Espana, the Tour of Australia is a fictional three-week Grand Tour route created by David Blom and Matt de Neef to showcase some of Australia’s best cycling roads. This is the second year of the race and today we reveal stage 17 of the 2014 edition.

After the third and final rest day, the 2014 Tour of Australia resumes in Tasmania; the race’s first visit to the “Apple Isle” in its short history. And while there aren’t any long alpine climbs for the riders to contend with on stage 17, there is still more than 220km and 3,500m of elevation gain to tackle.

Starting in the city of Devonport, in northern Tasmania, the riders head alongside the Mersey River before cutting across to La Trobe and then south towards Railton. These first 30km of the stage are largely flat, but just out of Railton the road kicks up. It’s about 7km of intermittent climbing, but nothing steep or sustained enough to warrant a categorised climb.

After 41km the riders reach Sheffield and the first intermediate sprint of the day and from there it’s north through Barrington before descending through Paloona, turning south west, and beginning the first of the day’s four categorised climbs.

The first of these is 5.1km at 5%, a third category climb that tops out after 68km. Continuing south-south-west through Lower Wilmot and Wilmot the riders soon hit the second categorised climb: the 6.5km-long third category climb which averages 5.2% and ends after 86.5km.

After passing through Erriba and a very short climb, the riders take on a fast descent for the best part of 10km, which turns them east. The descent ends after 99km, at which point the riders start climbing again. This third ascent is 3km at a very steep 10.8% with the summit in Cethana. And then, after a short descent, it’s on to the final climb of the day: another 3km at 9.4%, peaking after 108km.

While there’s still plenty of climbing left in the day, this takes the form of little rises and short climbs that aren’t worthy of classification.

Heading south from the top of the last classified climb at 108km the riders climb a little, descend for 8km, climb some more, and then begin the flatter eastbound run towards Launceston.

The second and final intermediate sprint is in Deloraine after 169km and from there it’s roughly 50km to the finish in the centre of Launceston. There’s a slight descent into town before a mainly flat finish on Charles Street.

With a largely flat run in to Launceston this is the sort of stage finish that could suit the sprinters … assuming they can get over the climbs in the middle of the stage anyway. This is particularly true of the last two climbs which are quite steep and could have the fast men in real difficulty.

It’s the sort of stage you might expect the likes of Peter Sagan or Michael Matthews to go quite well on. They’re strong enough to get over the climbs in the bunch, before biding their time and unleashing their powerful sprint at the end. Expect the teams of such riders to force the pace on the steep climbs, to try and shed the sprinters that aren’t so proficient in the hills.

Having said all that, it could be a stage that goes the way of the breakaway as well. It’s not a stage that should be decisive overall so the GC contenders might be inclined not to chase. Then again, there’s a fair amount of flattish road before the finish in which the teams of the sprinters (or those left after the climbs) could chase down an escape group. It would be a fascinating stage to watch.