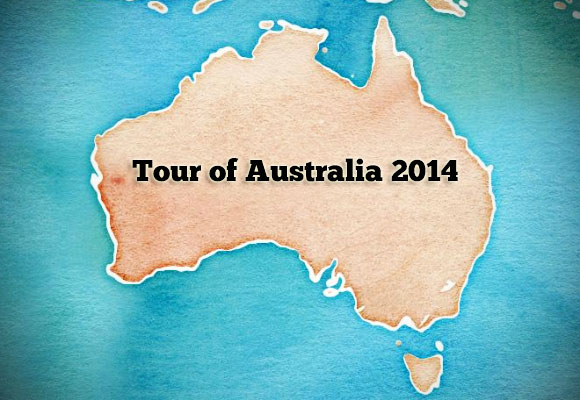 Around this time last year, while watching stages of the Giro d’Italia late at night, David Blom and I got to thinking: what would an Australian Grand Tour look like? We’ve got no shortage of great cycling locations and amazing climbs, and with such a huge landmass, there’s any number options for potential stages.

So after planning out a challenging three-week route, we set about revealing one stage per day, between the Giro d’Italia and the Tour de France. And thus the Tour of Australia was born.

The race started in Adelaide with a 9km prologue individual time trial. It then headed south east, down through the Grampians National Park, along the Great Ocean Road, and around Melbourne on its way to the Victorian Alps.

There were mountain-top finishes at Mt. Baw Baw and Mt. Hotham, to name just a couple. And in the third and final week the race made its way up through the NSW, into the ACT for a stage finish in the shadows of Parliament House, and back towards Sydney for an ITT and a beautiful final stage, which finished at the steps of the Sydney Opera House.

And so, a year on from that inaugural Tour of Australia, the race returns with another three weeks of great roads, memorable climbs and, hopefully, inspiring routes for you to try out next time you’re looking for an epic ride.

Of course, there are a number of reasons a race like this simply wouldn’t happen (not least a race calendar that’s already hugely cluttered), but we reckon mapping it out is still an interesting and enjoyable exercise. We’ve tried to be as realistic as possible with the route, trying to find a mix of flatter stages, medium mountain stages, summit finishes and time trials. We’ve also tried to ensure that the total length of the Tour is similar to that of the existing Grand Tours, with a similar amount of climbing.

We’ll be revealing stage 1 of the 2014 Tour of Australia on Friday but before we do that, I need to say a huge thank you to David Blom for his tireless efforts in putting this route together. As you’ll see in the coming weeks, a lot of thought and planning has gone into this project and I’m very grateful to David for his efforts.

In the meantime, check out the links below for info on every stage of last year’s Tour. Sadly, Google has changed its mapping API in the time since publication so many of the maps are broken, but you can simply click on the links below the maps to see how each stage would look, where the categorised climbs are and where the intermediate sprints are.

Thanks for reading and we hope you’ll join us for the 2014 Tour of Australia!

5 Replies to “Tour of Australia 2014: an introduction”