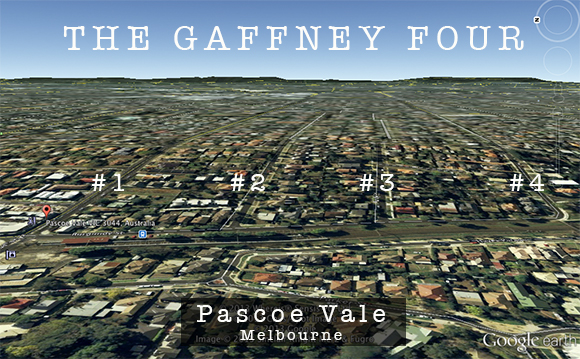 It’s no secret that I enjoy climbing the odd hill, particularly if there’s a great view waiting for me at the top. I also don’t mind testing my legs on shorter, steeper rises from time to time which is why I was more than happy to check out a video I was sent via Twitter today (thanks Rob!)

According to the video’s description on YouTube it’s all about:

One man’s battle with gravity, age and stupidity as he cycles “The Gaffney Four” which includes one of the steepest suburban streets in the whole wide world.

I took a look at the elevation data for the four streets using Google Earth and calculated the following average gradients:

As high as those average gradients are, it’s the maximum gradients you have to worry about:

A gradient of 30% is going to hurt regardless of the gearing you’re running, let alone with the ridiculous 42×23 combination the bloke in the video is running. On that note, here’s the video:

When I first read the video description and saw O’Hea Street described as “one of the steepest suburban streets in the whole wide world”, I was a little sceptical. But, as it turns out, with a maximum gradient of 30% it’s not far off.

Baldwin Street in Dunedin, New Zealand is often considered the steepest residential street in the world (and the folks at the Guinness World Records agree), with a reported maximum grade of 35%. Fargo Street in Los Angeles supposedly peaks at 33%, several streets in San Francisco have grades in excess of 30% and Canton Avenue, one of the Pittsburgh Dirty Dozen climbs, is possibly even steeper with a maximum slope of 37%. Yep, ridiculously steep.

It got me wondering: what is the steepest residential street in Melbourne? Is it O’Hea Street? I can think of several streets that are well over 20% — Glenvale Road in Donvale for one — but I haven’t heard of any that touch 30%. Until now.

So, is O’Hea Street the steepest residential street in Melbourne? Or do you know of one that’s steeper? And come to think of it, why limit it to Melbourne? Do you know of any other streets in Australia that touch 30%? Leave your thoughts in the comments below.

101 Replies to “O'Hea Street: the steepest climb in Melbourne?”