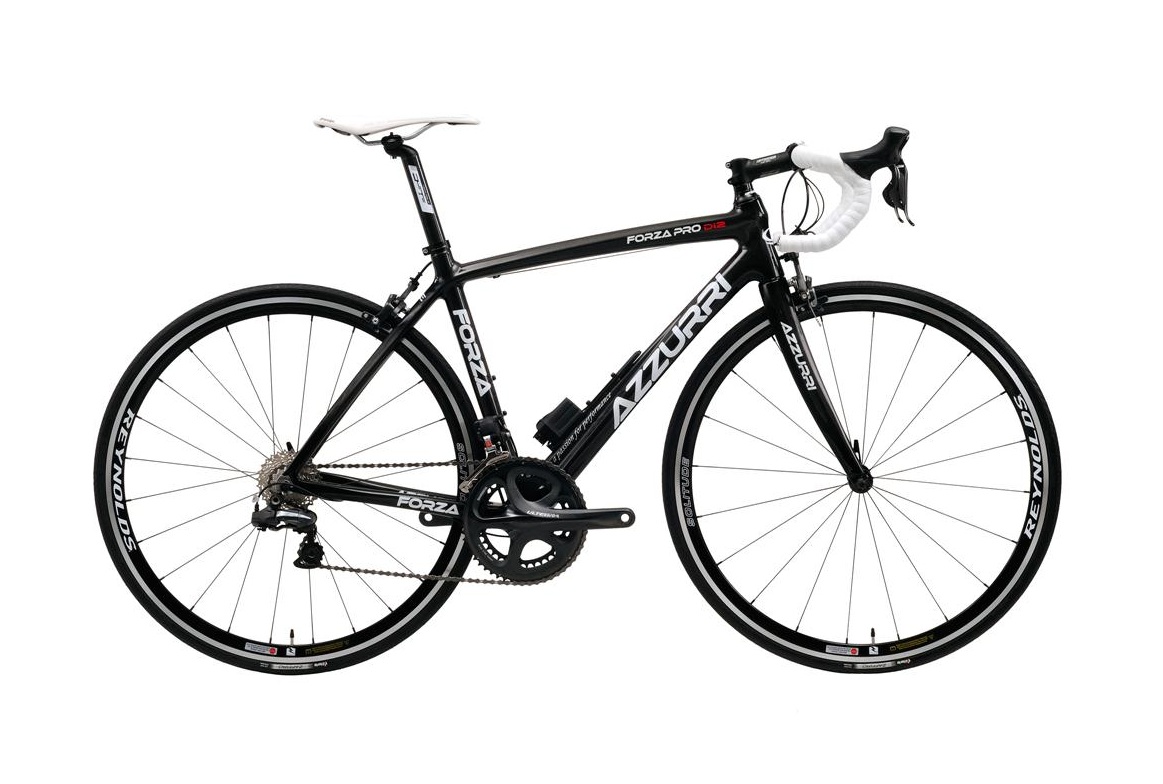 Disclosure: This bike was sent to me to review by Cycling Express, an Australian Azzurri outlet. Cycling Express is now a sponsor on The Climbing Cyclist but this review was organised before that sponsorship began. I was not paid for this review and I did not get to keep the bike.

One of the most enjoyable things about buying something new is the moment you open the box, start unpacking and going through the goodies that come with your new toy. And if you buy the Azzurri Forza Ultegra Di2 Pro through Cycling Express, you’ll get to enjoy that unboxing moment. As Sam from Cycling Express told me: “We first build and tune the bikes in store and we then remove the front wheel, seat post and handlebar for shipping”.

Sadly, I didn’t get the chance to unbox the bike I was reviewing as it came already built and ready to go. But in all honesty, that was probably a blessing in disguise. My bike construction and maintenance skills are embarrassingly underdeveloped and even something as simple as reattaching the front wheel, seat post and handlebars could have ended in tears.

The first thing I noticed when the bike arrived was that the Azzurri Forza is a sleek little unit with a great black and white (with a touch of red) colour scheme. The 30mm-rim Reynolds Solitude wheels particularly caught my eye and my first thought was that they mustn’t have been part of the standard package. But they are, and they look great. If you go by the simple theory of low spoke count + white writing on the rims = bling, then the Reynolds Solitudes are a winner. They also happen to roll really nicely. 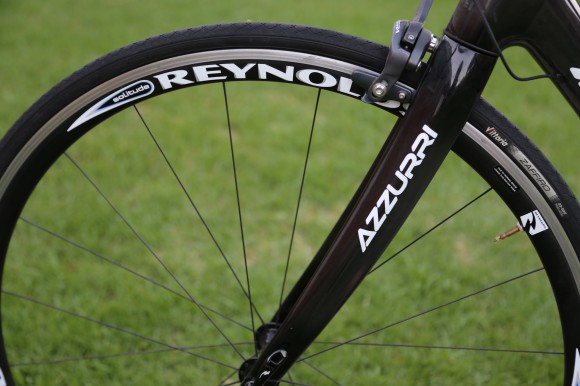 Reviewing this bike was the first opportunity I’ve had to ride a full-carbon frame road bike for any meaningful length of time. And coming from an aluminium frame I was expecting to notice a big difference in the way the bike handled. But, if I’m totally honest I didn’t notice a whole lot of difference. Both feel similar in terms of their stiffness, and I was still feeling bumps in the road as much as I did on my Cannondale CAAD10. Probably more so.

This might have been due to the Prologo Zero Pas saddle which is considerably harder than I would normally ride. After feeling every bump in the road (and being generally quite uncomfortable) for a couple of rides, I switched to my Prologo Kappa Pas which seemed to soften the ride ever so slightly.

I don’t want to spend too much time talking about the grade of carbon fibre here, other than to say that it’s T700 which, if this graph is anything to go by, means the frame is strong, but not particularly light, and not particularly stiff, in the grand scheme of things.

(Update: Sam from Cycling Express sent me this note after I published the article and I thought it was worth sharing: “The feel of a bike can be greatly influenced by the type of tyre used and the tube pressure and, as you said, the saddle. Most bikes on the market use T700 or similar so it’s usually the shape of the tubes that creates the biggest point of difference, not so much the grade of carbon used.)

But the bike was definitely responsive when I was pushing hard and I felt that the power transfer was probably better than I’m used to. According to Cycling Express, this could be because “the Forza Di2 carbon frame utilises Azzurri’s exclusive ‘Mega Watt Transfer’ oversized downtube, bottom bracket and chain stays ensure that you get the maximum from every pedal stroke.” 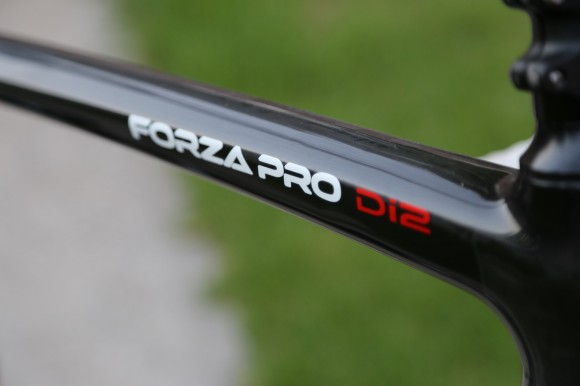 Whenever I’m looking for a new bike, I’m largely looking for something that climbs well and that I can descend confidently on. And the Forza Ultegra Di2 Pro did well on both counts. While it isn’t the lightest bike on the market — 8.3kg with Shimano SPD 105 pedals attached — I had no trouble getting it over the Victorian Alps, and when it came time to descend, I felt comfortable straight away and the bike was very responsive when I threw it around the corners.

By default the Forza Ultegra Di2 Pro comes with a standard crankset (39×53) and a 11-25 cassette. While I was able to get up everything the Alps threw at me — including the steep pinches of Mt. Hotham — I did find myself searching for an extra gear on several occasions. If you’re buying this bike and looking to do a fair bit of climbing, it might be worth considering the extra $200 to get a compact crankset fitted.

One of the defining features of this bike is the Ultegra Di2 electronic shifting. And it took me some getting used to.

When the bike first arrived for me to review, I was keen to take it out for a ride straight away. I got kitted up, wheeled the bike out of the garage, got on and set off down the driveway. One problem: I was in a gear that was far too big and I could barely turn the pedals over. I pressed the appropriate button in the hope of changing to a lower gear but the derailleur didn’t move. I pushed again, hoping I just hadn’t pushed hard enough. Nothing.

It’s the first time I’ve been able to use a flat battery as an excuse for not going for a ride and given the charger hadn’t arrived with the bike, I had to wait a few more days before taking it for a spin.

Of course, this isn’t something you’d put in the “Cons” column of a review, but the idea of needing a battery to go for a ride was rather alien to me. I actually found the shifting buttons a little hard to get used to as well (once the battery was fully charged, at least). With the Ultegra Di2, you simply press a button to change gears. I found the lack of “give” in the buttons a little strange compared with the mechanical Ultegra I normally ride and on a number of occasions I even changed gears in the wrong direction because I was going on feel rather than button placement.

But again, these aren’t criticisms of the Di2 per se, merely observations about what it’s like adjusting to the electronic shifting.

In terms of the Di2’s performance it’s fair to say I was impressed. The shifting was fast and accurate and in more than 1,100km on the bike the chain didn’t come off once. Plus, the whirring noise the front derailleur makes when it shifts between chain rings is awesome.

I did find, though, that the rear derailleur had a tendency to come out of alignment and the chain would slip between sprockets slightly. This happened on a number of occasions, normally after hitting small bumps in the road. But fortunately, by pressing the “rear derailleur adjustment button” and holding it for a second, I could force the Di2 derailleur to recalibrate, bringing everything back into line again.

I didn’t get a chance to try it out, but apparently with a firmware upgrade the shifter buttons can be used to flick through multiple sprockets at once. Rather than pressing the button three times to move three sprockets up the cassette, you simply hold the button down until you’re in the desired gear. Cool.

And so to one of the biggest drawcards of this bike: the price. You can currently order the Azzurri Forza Ultegra Di2 Pro through Cycling Express for $2,499 (matte black) or $2,599 (gloss black)  (Update: Cycling Express currently has these bikes in stock so there’s no need to wait). There’s no doubt that this bike is great value — the Di2 groupset alone will cost you close to $2,000 so in essence you’re getting the frame, wheels and everything else for less than $600 — a bargain.

The only real criticism I have of this bike is a creaking sound I had coming from the seatpost (or maybe the saddle rails). I adjusted the saddle and seatpost a bunch of times to no avail, and even some assistance from a local bike shop wasn’t able to help. Oh, and then there’s the bar tape. Sure, white looks great but it’s not the most practical colour. Unless you’re one of those riders that manages to keep totally clean and presentable on every ride, you’ll find the white bar tape getting pretty grubby in no time flat.

But if I’m picking on bar tape and a creaking noise as the main drawbacks with this bike, then it’s probably doing most things right. Overall, you can’t really go wrong with a full carbon bike with Ultegra Di2 for around $2,500 … so long as you’re happy to buy a bike online (make sure you get the sizing right)  and you’re happy enough to do the last little bit of assembly yourself.