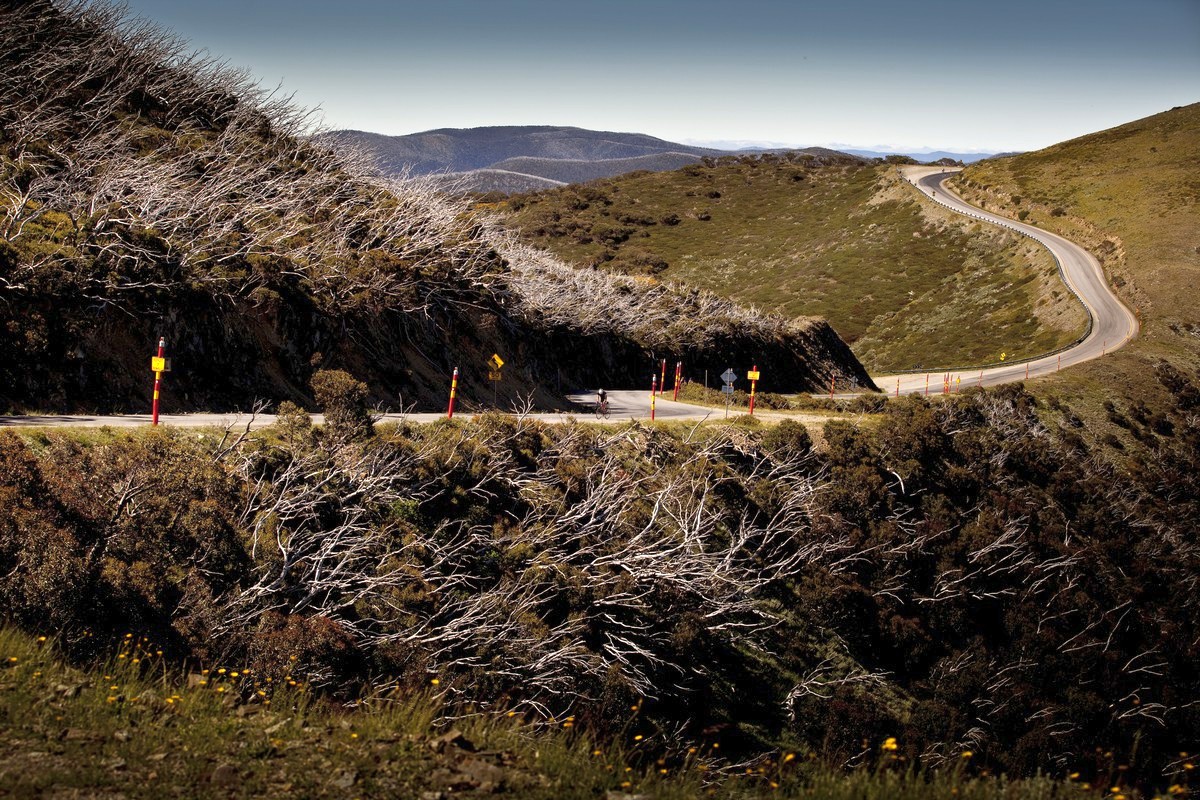 This is the second of four blog posts about a recent trip to the Victorian Alps for the 7 Peaks Domestique Series. Part one can be found here.

The 5am alarm was brutal. I felt like I’d barely slept and my legs were still aching from climbing Falls Creek twice the previous day. When I staggered out into the living area in our apartment at Quay West Falls Creek it was to see that others were similarly unimpressed with the early start. A few grunts of acknowledgement were exchanged as we went about preparing for the day ahead. And it was going to be a big day.

Mt. Hotham was first on the menu and later in the day we’d be taking on Mt. Buffalo. But the afternoon climb felt so far away as we got in the car at 6am and started the long drive down to Mt. Beauty, over the Tawonga Gap and down to Harrietville.

There were still some tired heads when we got to the base of the Mt. Hotham climb at about 7.30am but by the time 8am rolled around and it was time to do our rider briefing I was feeling slightly more human. For one thing I was excited by the prospect of riding with our two special guests — Lotto-Belisol sprinter Greg Henderson and local Stay True Racing pro Peter English.

They were both in the Alps training for the Bay Crits and had kindly agreed to come along, say a few words to our riders and join us for one of the country’s most gruelling climbs.

It gave me some confidence when ‘Hendo’ spoke about how challenging he finds the Mt. Hotham climb. And when it became clear that he and Pete would be taking it reasonably easy on the climb, I figured I’d have a shot at staying with them … at least for a little while.

With the briefing done and with John Gogis and Brian Beardon volunteering to take lanterne rouge duties (thanks guys!) Andy and I were able to head off with Hendo and Pete and see how long we could last for. I made the rookie mistake of turning my Garmin on mere seconds before we rolled out and so the first few kilometres of the ride didn’t register as the unit tried to locate satellites. I wasn’t about to stop and wait for it to sort itself out.

Our little group waited until a couple of minutes after the last riders left, so as we worked our way through those opening kilometres there were plenty of people for us to pass. To Greg and Pete’s credit, they said a quick ‘g’day’ to most riders as we passed — it was a small gesture but I know the riders really appreciated it.

The pace in those opening kilometres was quite manageable and while I wasn’t taking it as easy as I might have had I been riding alone, I was certainly able to keep up with Greg and Pete. The first real test came, as it always does on Mt. Hotham, with The Meg. As the road ramped up to 10% or thereabouts, I tried to stay in touch with our guests and found that, thankfully, my legs had enough in them to allow me to do so.

I wasn’t riding my regular bike — instead I was riding a bike for a review I’m doing, a bike that just happened to have a 39×25 as the smallest gear, compared with the 34×28 my Cannondale has. It certainly made for a grind on the steeper sections like The Meg.

I knew if I could stay with the group until the false-flat I’d be able to slipstream behind the others until the final third of the climb, and so it proved to be. I got through the final few kilometres of climbing after The Meg and when the road flattened off, the pace lifted and I was able to stay in touch. It looked like Hendo was just riding at a constant power for the whole climb (I’m guessing 200 watts, but I could be way off) which it made it reasonably easy to stay with him.

It was certainly surreal though — riding one of my favourite climbs in the slipstream of a world-class sprinter. And if I though that was cool, the final section of the climb was even better.

I figured that when the road tilted up into the final third of the climb I’d be dropped reasonably quickly. It certainly got harder to hold on once we started that section, but to my surprise (and delight) I was able to stay with Greg, Pete and others. We hit the first downhill section and Pete and Hendo flew off the front, showing off their impressive descending skills.

At the bottom of that short drop it was into the second really tough section of the climb — CRB Hill. I caught back onto the group reasonably easy but with the 39×25 gearing and with Hendo and Pete maintaining a constant, painful tempo, I found myself in real difficulty.

It got harder and harder to match their pace and finally, with about 200m left in the 1km-long CRB Hill I fell off the back. But as I summited the steep ramp I noticed I was only a short distance behind them and decided to see if I could tack back on. A short max effort later I was back in touch … and I’m glad I was.

The ride from that point went from surreal to simply sublime. Here I was in a small group riding with a couple of pros on top of the world with immaculate views on either side of the road. Not only that but the weather was perfect and any feeling of fatigue from the day before had totally disappeared.

I was slightly worried about the final section of steep climbing before the summit — the Diamantina — but I needn’t have been. I’m not sure if I was just more determined not to get dropped or if the pace slowed slightly, but I was able to stay with Hendo, Pete and the others all the way to the top before bombing down into the Mt. Hotham village. Simply awesome.

One of  real highlights in a climb full of highlights was Hendo’s impersonations of other riders in the pro peloton. He started off with a very-accurate-sounding impersonation of Jens Voigt talking about riders getting attacked by bears in the mountains (the last item on this page).

He then went on to do the best impression of Alberto Contador I’ve ever seen, getting out of the saddle in his trademark bouncy fashion. As Hendo danced on the pedals he looked left and right in a carefree manner, just as Contador might while shelling 95% of the peloton on a climb … without really trying.

It was probably a classic ‘you had to be there’ moment, but combined with conquering one of the toughest mountains in the state and doing so with a couple of gun riders, it was a hilarious and memorable moment.

We finished the climb in 1 hour 41 minutes, 30 minutes slower than Pete would ride it during the Tour of Bright, but 7 minutes faster than I’ve managed before. It was the icing on the cake for what had been a great climb for me, and a great follow-up to the PB I’d managed on Falls Creek the day before.

There are few climbs in Victoria that give you the same amount of satisfaction at the top as Mt. Hotham. The combination of its length, the variable scenery and the very tough final section make for a tremendous feeling of achievement when you roll under the bridge and into the village. And so it was with the dozens of riders that followed us to the summit, most with huge, satisfied grins on their faces.

For some it was the longest and toughest climb they’d ever done, for others it was a return to the great mountain with a PB the goal. I reckon it’s one of those climbs that never really gets easier. Sure, you might get faster at climbing it, but unless you’re going super-slow, Mt. Hotham will always work you really hard just to get to the top.

Despite it being a very challenging climb, it was the ride that attracted the biggest group of the weekend — an incredible 92 riders. It was so satisfying to see so many people turn up to ride with us and to see how just how stoked people were when they came to a stop in the village, knowing they’d achieved something epic.

Cycling Express have been good enough to provide us with a bunch of $20 vouchers to give to riders that put in particularly inspiring efforts during the series. After some consultation, Andy and have decided to award the vouchers to the following people for the Mt. Hotham ride:

I’d also like to thank Andy’s wife Tammy and my partner Sharon for their tireless efforts in supporting the ride. Tammy also stayed with Gavin after his fall and was a huge help throughout the day. Sharon too was incredibly valuable from start to finish, not least in driving Fletch back to Harrietville after his frame just snapped on the way back down the mountain.

Thanks very much to Brian Beardon for helping with lanterne rouge duties as well, thanks to Emma & Tom’s for providing the post-ride refreshments, and thanks to Winners Cycling for providing the energy bars and gels I know the riders greatly appreciated.

With Mt. Hotham done and dusted it was time to head to Bright for a quick bite to eat before taking on the second big challenge of the day: Mt. Buffalo.

A big thank-you to Kirsten Simpson and Wil Gleeson for providing the terrific images you see in the post above and the gallery below. To see more of their photos, head over to the Hells 500 Facebook page. The Strava file for my ride can be found here.

The order of these names doesn’t necessarily reflect the order in which riders finished the climb. If we haven’t got you on the list, let us know! If we’ve spelled your name wrong, you should have written it more clearly in the notebook … but let us know and we’ll fix it up! If you’d like your climb time listed, email me with the details (and a Strava link or similar to prove it!)