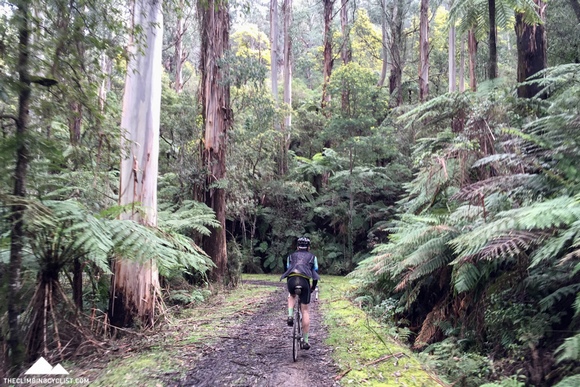 UPDATE: my highlights video from the ride is now up. Click here to see it.

When Andy van Bergen described a section of Sunday’s Ol’ Dirty ride as “pretty f*cking hectic”, my ears pricked up immediately. Andy’s by far the most optimistic person I know — nothing’s ever too hard, everything’s always going to be ok, and that 300km ride you’re about to do with 5000m of climbing? You’ll be right.

So given Andy’s tendency towards the optimistic, just how “hectic” was the sector of single-track he’d been describing? I mean, it wasn’t like the path was cut up and muddy and we were about to tackle it on road bikes. Except that we were …

For those in need of a quick catch-up, Ol’ Dirty 2015 was the fourth edition of an event by Andy’s Hells 500 that began as Donna Done Dirty in 2012 and then became Ol’ Dirty last year. The selling-point, as you might be able to deduce, is the opportunity to ride on a bunch of dirt roads in winter with a whole bunch of like-minded (read: slightly strange) individuals.

The name is also a reference to late US rapper Ol’ Dirty Bastard whose tunes (among others in the genre) were heard blaring at the start village for Sunday’s ride. In addition to referencing US rap culture, this year’s Ol’ Dirty had another cultural touch point.

Andy’s pre-ride briefing was “interrupted” by a handful of rowdy individuals wearing red baseball caps and jerseys, all bearing the name “Redwoods”. These individuals were spruiking a gathering of sorts; a tailgate party which would constitue the day’s lunch stop.

With that, the tone was set and the ride could begin.

The ride kicked off with a cruisey jaunt along the Lilydale-Warburton Rail Trail towards Millgrove where the day’s main climb began.

For those that didn’t look at the ride profile beforehand, I can only imagine that the length of this ascent came as some surprise. Fourteen kilometres at an average gradient of 4%, all on dirt roads in various states of disrepair, proved to be a solid warm-up and field-sorter.

With barely any riding under my belt in recent weeks I was most apprehensive about this section of the ride, yet found myself feeling much stronger than I anticipated. I put it down to the lack of a long run in the past week, and the cardiovascular fitness marathon training has helped develop in recent months.

The climb was quite variable as it wound us through thick bush on Brittania Creek Rd, and for the most part it was quite manageable. There was one section, however, where we descended into a muddy corner before being thrust skyward at a gradient that would have been hard enough on a sealed road, let alone the rutted-out-and-muddy track we were on.

With many riders ahead of me walking their bikes up the hill, I was determined to get up it without putting a foot down. It was a near-maximum effort to do so, but just as hard was the challenge of keeping traction and forward momentum. It was a great test for the Dirty Dozen in a few weeks’ time …

From the top of the climb it was straight into the descent which, thankfully, was in better condition than the road we’d just ascended. It took us down a road I’ve often eyed off when climbing over Mt. Little Joe — Mt. Bride Road — and helped fill in my mind-map of the region that little bit more.

The end of the dirt descent signalled decision time: descend the sealed road into Warburton, or opt for the “pretty f*cking hectic” single-track that Andy had spoken about in his briefing?

I was in the process of making up my mind when I saw a rider bin it while trying to get on to the single-track. “I think I’ll take the bitumen,” I thought to myself.

After a minute or so of descending though — a minute spent watching riders slide along the roadside trail — I changed my mind. At the next available opportunity I jumped on to the track, and I’m glad I did. 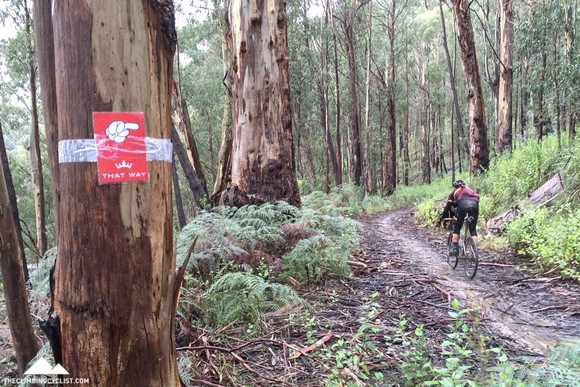 There’s a feeling I always get when hopping on a mountain bike for the first time in a while. It’s a feeling of being horribly under-equipped, skill-wise, to handle the technical demands of the trails. I had the same feeling on Sunday only this time it wasn’t just my skills that were lacking — my road bike with 25mm tyres clearly wasn’t the right tool for the job.

The muddy tracks were lined with slick ruts, carved out by the dozens of cyclists that had passed before me. Water ran freely down the hill, often ensuring the track resembled more of a creek than a path. Finding a good line was tricky at times and dangerous at others, my back tyre ever poised to slip out from underneath me.

Before too long I got to the end of the trail and breathed a deep sigh of relief; I’d managed to keep the bike upright. I said to a fellow rider who was stopped by the roadside “that was pretty crazy!”, or something similar. He replied “Yes, but everyone that’s come out of there has had a huge smile on their face.”

He was right. It was tricky, but I thoroughly enjoyed every minute of it. Being completely ill-equipped for the challenge you’re about to face but still managing to get through it is remarkably satisfying. And the concentration required to keep the bike upright was great practice for future mountain biking endeavours. 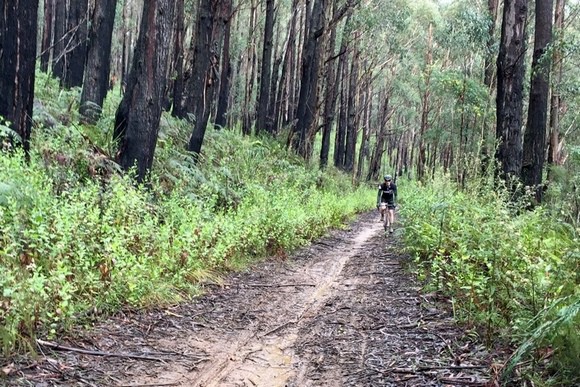 Around this time I met up with my CyclingTips colleague Jonathan with whom I’d share the rest of the ride. We were back on flat, sealed roads for a few rare kilometres as we passed through the outskirts of Warburton, before heading back on to dirt roads via Big Pats Creek.

If you don’t mind the idea of riding your road bike on dirt roads, or indeed if you’ve got a bike more suited to the challenge, I’d highly recommend checking out the roads featured in Ol’ Dirty this year and last year. It’s easy to forget the stunning surrounds you’re riding through when you’re focused on staying with a group or blasting up a hill, but that’s not what Ol’ Dirty is about.

I’m glad I remembered to look around me throughout the ride and to stop and take photos when the urge took me. Quiet roads that wind you through beautiful, temperate rainforest with barely a car in sight? Just magic. 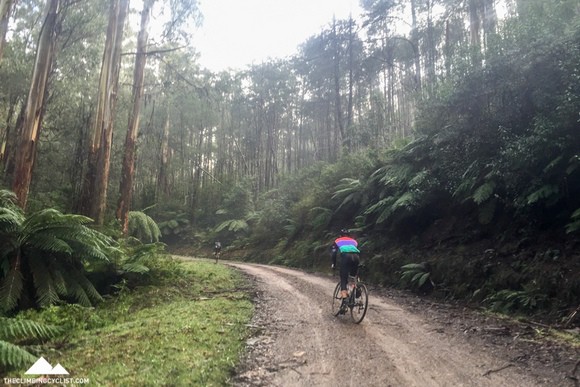 After the briefest of visits to the sealed surface of Woods Point Rd, we were turning on to Cement Creek Rd and back on to a more familiar unsealed surface. Barely a kilometre up the road (and safely over a super-slippery wooden bridge) we joined a large crowd at the Redwoods lunch stop/tailgate party.

Doctor Pepper, Cherry Cola, pulled pork with coleslaw and cornbread, baseball jerseys and more — Andy and his many volunteers had gone to great lengths to create a distinctly American vibe at lunch. The food and drink were great and the atmosphere even better. For other visitors to the area it must have been a rather odd sight, hundreds of inappropriately equipped cyclists somewhere in the middle of a forest, drinking unpopular soft drink while covered in mud.

Andy himself, meanwhile, was nowhere to be seen. News eventually trickled through that he’d broken his derailleur on the gnarly single-track he’d described earlier in the day. After fashioning a single-speed from his broken drive chain he pushed on, not without significant resistance from a largely-jammed chain and rear mech.

He arrived at the lunch stop a broken man, eventually packing his bike in the car and bailing on the rest of the ride.

For the rest of us though, the ride went on, starting with a visit to a spectacular Californian Redwoods plantation just around the corner from lunch.

First planted in the 1930s then added to in the 1960s, these towering trees are an odd sight among the native Australian bush but a sight to behold once you’re inside.

Perhaps most striking is the lack of wind or noise inside the plantation — the first thing you notice as you step into the forest is how deathly still it is around you. Slightly creepy, but undeniably beautiful.

Back on the road we had just a short jaunt up Cement Creek Rd to the O’Shannassy Aqueduct Trail.

We’d follow this narrow path for the next 10km or so, winding our way among towering gums and abundant ferns. Jonathan and I took it slowly, giving ourselves as much time as possible to take it all in, but also ensuring we didn’t lose traction on the slippery trail. A short but fast descent later and we were back in Warburton for the final test of the day.

The route took us past the foot of the feared Martyr Rd climb which was offered up as an added extra for anyone brave (or stupid) enough to give it a shot. I didn’t hesitate — I knew it would hurt but I also knew it would be a great opportunity to get in a bit of training for the Dirty Dozen.

A short but painful grind later I was descending Martyr Rd and heading back to Warburton to complete the ride.

There were many things I loved about this year’s Ol’ Dirty. The challenging course, the opportunity to see roads I’d never seen before, the feeling of satisfaction realising I was stronger than I expected to be, the weather, the lunch stop, the fact I got through it with no mechanicals, punctures or falls … and so on. But perhaps the most satisfying element, as is often the case, was the social nature of the ride.

Having spent much of the winter off the bike (and much of the year, to be honest) I’ve barely seen many of the people I’d normally ride with. This meant Ol’ Dirty became one giant catch-up session. Few of the conversations lasted long, but all were valuable in some way. All were a reminder that the social element of cycling is one of many things that makes this sport so great.

Thanks to everyone that came up and said hi, and particularly to those that offered kind words about this website or events I’ve helped organise in recent times. Several people thanked me for organising Ol’ Dirty and while I’d love to take credit for the many, many hours of work Andy et al pumped into it, I really can’t. I, like just about everyone else there, had the privilege of enjoying the event as a participant and nothing more. And I enjoy it I did.

On that note, a big thanks to Andy, his wife Tammy and the entire support crew that pulled together another terrific event. I’m writing this a few days later and the buzz from the day still hasn’t worn off. If that’s not the mark of a successful and enjoyable event then I don’t know what is.

You can find the Strava file from my ride here.

For those that are interested, I was riding my regular Cannondale CAAD10 road bike with compact chainset (34-50), 11-28 cassette, Shimano C24 wheels and Challenge Strada ‘open tubular’ tyres.