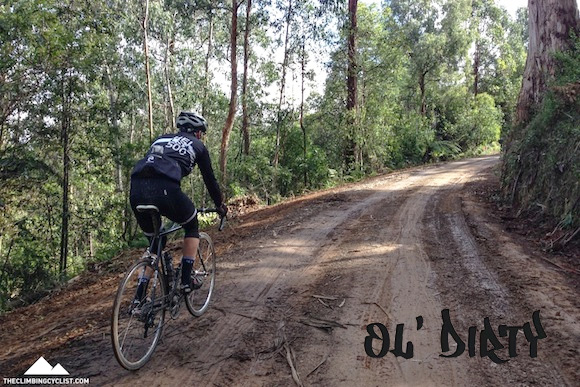 Update: see below for a video I shot during the ride.

If there’s one thing I’ve learned from organising cycling events with Andy van Bergen of Hells 500 and riding in the ones he’s organised, it’s that he doesn’t do things by halves. He’ll take any opportunity he can to go above and beyond what people expect of him and his rides, all to create that wow factor. I knew the lengths Andy had gone to in pulling Ol’ Dirty together on Sunday, and yet I was still blown away by the vision and the execution.

In previous years the event was known as Donna Done Dirty with the ride taking us up the unsealed side of the Mt. Donna Buang climb. But this time around, the plan was to do something a little different; to take riders on roads and trails they almost certainly hadn’t ridden before. The Donna Buang climb would be left out, but in its place were a whole host of great, quiet roads and a bunch of very challenging unsealed climbs.

I had a number of people come up to me on Sunday and thank me for helping to put the ride together and while I was more than happy to take credit for Andy and his family’s hard work, the reality is my involvement was minimal. I helped get a few permits together and that was it. 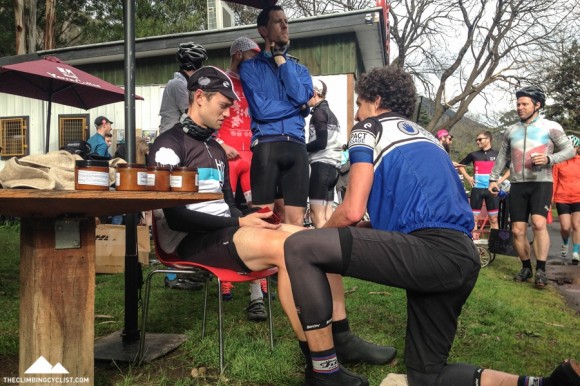 I rocked up to Warburton’s Cog Cafe early on Sunday morning to the sound of ’90s hip hop blasting to the waiting crowd. The name “Ol’ Dirty” was a reference to the nature of the course — almost entirely unsealed with plenty of muddy sections — but it was more than that; a reference to rapper Ol’ Dirty Bastard, whose tunes could be heard at the start and whose nickname appeared as the name of the mid-ride pop-up cafe. More on that soon.

At the starting village riders queued up to get an embrocation rub down and collect their goodies (including a pair of limited edition Ol’ Dirty socks) before Andy kicked things off with a short briefing. And then we were off, heading down the Lilydale-Warburton Rail Trail towards Milgrove where we jumped on to Dee Road.

I knew there was a bit of a climb to get to the O’Shannassy Aqueduct Trail but the steep ramps of Dee Road were a rude awakening. I tried to find a comfortable rhythm, knowing that there was plenty of tough climbing to come later in the ride, but even still it was a relief to get to the top and to look out over the great views from the Aqueduct Trail. 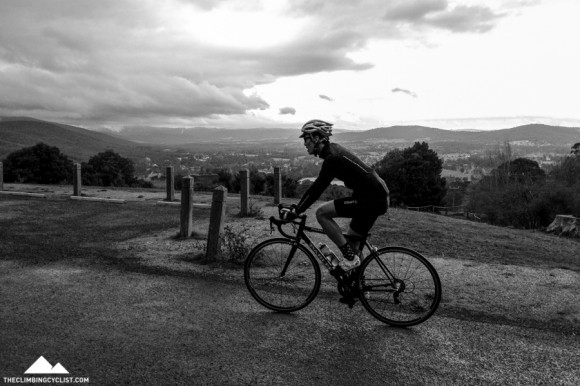 Until our recent ride up to the snow of Mt. Donna Buang I’d never ridden the O’Shannassy Aqueduct and Sunday’s ride was just the second time along there (albeit in the opposite direction). It’s a beautiful little bit of trail that runs right alongside an aqueduct on the lower slopes of Mt. Donna Buang. In reality I had little time to appreciate its beauty because with a bit of rain the night before, riding the trail was quite technically challenging.

I was riding my road bike with 25mm Challenge Strada tyres and even though I’d underinflated them compared to what I would on tarmac, I still found handling to be challenging. The many tight corners were nervewracking to negotiate, the back wheel seeming keen to slip out at any opportunity.

Many riders ran into mechanical difficulty on the trail — I saw at least three riders with broken derailleurs, presumably from sticks that had flicked up and gotten wedged. There were also plenty of punctures, and I even heard about one guy who ended up in the aqueduct after coming off at one point. Unlucky, but hilarious.

I got through the roughly 15km aqueduct trail sector unscathed and turned on to the first of the gravel roads of the day. I knew that we were headed to the forested areas south east of Warburton but none of the roads we were on were familiar to me.

Thankfully, Andy had gone to the trouble of creating bright pink directional signage cards to place throughout the route. These were excellent — there wasn’t a single point on the 66.8km ride where I felt like I was off track or even unsure about which way to go.

In addition to simple left and right directional signs, Andy had prepared signs that warned of imminent danger (such as at dangerous bridge crossings) and signs that provided a simple reminder that we were still on track. 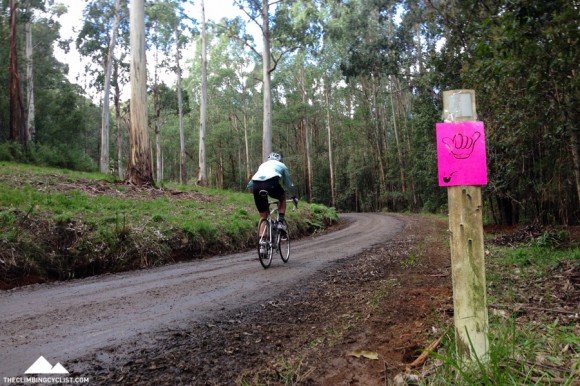 After a brief section on the Warburton-Woods Point Road, we turned right and started to work our way south into the bush. There were a couple of climbs of one or two kilometres just after the turn-off, providing a nice taste of what lay ahead.

Having seen the route map before the ride I knew there was a fair bit of climbing to contend with in the second half of the ride. While it felt like the climbing was sustained for quite a while after the halfway mark, looking at the profile of the ride I can now see that there was a little over 10km of sustained climbing at an average gradient of 6%. That’s a solid climb on sealed roads, let alone on dirt.

Perhaps it didn’t feel as long as that because there was a section in the middle there that was considerably harder than the rest. For 2km the road averaged 10%, with several ramps quite a bit steeper than that.

I’m familiar with the feeling of the back wheel spinning out when you’re climbing a steep grade out of the saddle, but I’d never felt that wheel spin while seated. That’s what happened in that steep section — with the road slick and muddy from overnight rain (and from plenty of cyclists passing through before me) it was hard to find traction. I had to keep my weight as far back as I could on the saddle, while still trying to push enough power through the pedals to keep moving. My Garmin spent plenty of time reading 6km/h in that section, but I managed to get through it without stopping. 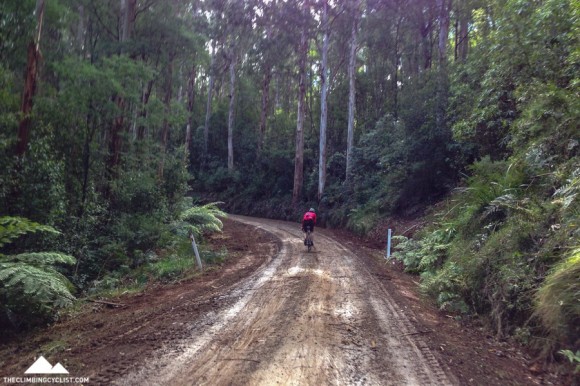 Just around the corner from the top of the steep section was a drinks stop and an ultimatum for all riders — should we take the high road (a ridiculously steep-looking 4WD track off to our right) or the low road (a more manageable climb to the left)?

Having been battling illness over the past few weeks and just wanting to get through the ride in one piece, I opted for the low road. Apparently something like 70% of riders took the high road. Impressive.

The climbing continued for another 3.5km at 6.3% but it felt comfortable and manageable compared to the steep ramps of the previous section.

At the top of the climb — the highest point of the day at 830m above sea level — we’d covered 41.8km and it was just 6km of undulating roads to the lunch stop at Starlings Gap.

As challenging as the climbs were on the day, it was probably the descents I found hardest. With slick corners and more than a few mud puddles to dodge, it was often a case of trying to find the firmest line through a corner and just hoping that the bike stayed upright.

Variable road surfaces also contributed to the challenge. If we weren’t dodging potholes or tree branches it was big rocks that presented a real danger of pinch-flatting. But, the advantage of taking quiet, dirt backroads — besides the opportunity to explore roads we’d never seen before — was the fact that there was so little traffic to deal with. I think I probably came across half a dozen cars for the entire ride. Gotta love that.

Rolling into the lunch stop was one of the real highlights of the ride. I knew quite a lot of what Andy had planned and I was still blown away. I can only imagine what it must have been like rounding that corner and seeing a makeshift cafe set-up in the middle of the bush if I hadn’t been expecting it.

Hip hop tunes rang out through the trees as Andy’s terrific volunteers (family, friends and more) wandered through the throng of riders, passing out lunch: delicious hot dogs with all the trimmings, courtesy of the fine folks at Rockwell & Sons. There were homemade doughnuts and cookies, and coffee to wash it all down.

It was all delicious — and more than welcome after an energy-sapping ride to that point — but more impressive was the amount of effort Andy and his crew had put in to make it all happen. A makeshift cafe setting with milk-crate chairs and menu cards, two generators to power the hot-dog warmers, and even a photo wall courtesy of Nigel Welch, featuring photos taken at the start of the ride just a few hours earlier. Brilliant. 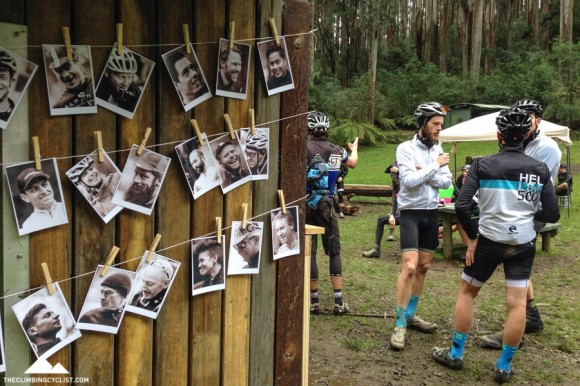 From Starlings Gap it was less than 20km back to Warburton, and mostly downhill. It was great getting to enjoy those “free” kilometres as we rolled back towards town, but again the descent proved technically challenging.

In addition to the slippery corners and the ever present threat of a rock-induced puncture, a few damaged sections of road had been “repaired” by dumping railway rocks on them. These fist-sized rocks would have slowed cars down, let alone road bikes with 25mm tyres.

It was a case of inching our way through them cautiously, lest we suffer a puncture or worse.

But I got through it unscathed and enjoyed as much of the descent as I could. At around Pats Creek we returned to sealed roads for the first time in what felt like forever; a welcome relief.

The run back into Warburton on Riverside Drive was a lovely way to end the day. The sun was out, the end was in sight, and after battling rough and challenging roads all day it was nice to be able to stretch the legs and get some value for our pedal strokes.

I rolled back into Warburton having taken about 3 hours 40 minutes to cover the 66.8km of riding — an average speed of roughly 18km/h.

It was certainly a more challenging ride than the distance would suggest. Dirt roads make it hard enough, but when you’ve got steep and sustained climbs to deal with — not to mention challenging and technical descents — it’s always going to be slow going. But it was a lot of fun.

I was particularly pleased to get through the day without any sort of mechanical issue at all. I’d, naively, only take one spare tube with me and it was only after the ride that I realised how lucky I was.

I heard of one guy who had six punctures on the day, several people that had four, and I’m guessing a fair percentage of people had at least one. And then there were the ripped tyres, broken derailleurs and more that ended many a rider’s day.

I’d like to say a big thank-you to Andy and his ever-impressive support crew for another fantastic day out. Thanks too to everyone that came up and said hi during the day, and to those that rode with me throughout the day. It was great to have some company and to meet some new people on a great day out.

From here my attention turns to Amy’s Gran Fondo in mid September and, on Sunday September 21, the 2014 Melbourne Dirty Dozen. I’ll have more information about the ride in the coming days (including how to buy your ticket), but until then feel free to join the Facebook event page.

And looking a little further ahead Andy and I are hard at work getting the Domestique 7 Peaks Series up and running for 2014/15. We’re just days away from confirming the dates and we hope you’ll be able to join us.