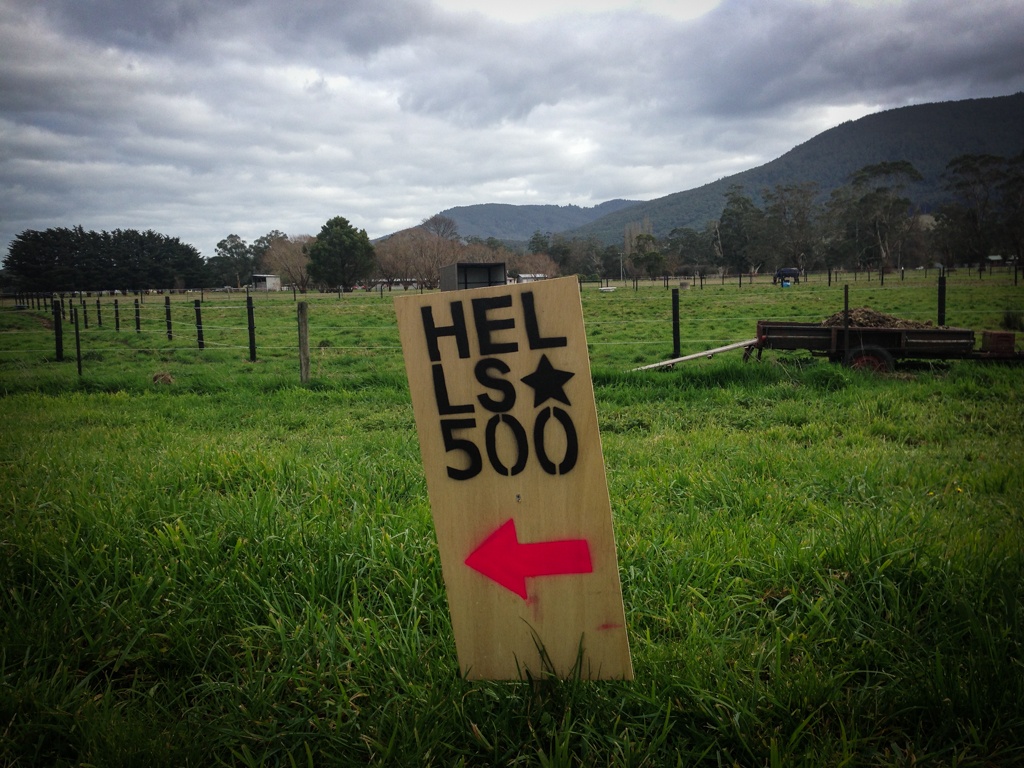 Like most cyclists, I’m not a huge fan of riding when it’s freezing cold. But strangely, when the cold becomes a defining feature of the ride, I’m much more inclined to be there. Case in point, Donna Done Dirty.

Last year’s edition was one of my favourite rides of 2012 and I was very much looking forward to the 2013 edition. We’d heard there was snow at the top of Mt. Donna Buang just a couple of days before the ride and it seemed likely we’d have some snow when we reached the summit on Sunday.

Roughly 80 riders met at the Cog Cafe in Warburton early on Sunday morning and after an opening address from Hells 500 founder and group ride architect Andy van Bergen the bunch split into two groups — those who were going to head straight up Mt. Little Joe for a “cold-legs KOM competition” and those that were going to roll straight towards the main climb of the day.

I jumped in with the Little Joe-ers  but with no aspirations of repeating or improving on my fourth place from last year’s KOM. For a start the field was much bigger than last year and given I’d been battling illness ever since I got back from the Tour de France I wasn’t about to push myself.

I tried to ride at a comfortable rhythm up the 2.9km climb and descended carefully down the other side, remembering that three or four riders had come off on a very tight left-hander last year. Even though I was expecting it, the corner still came up very fast and I was glad I’d taken extra precautions.

At the end of the descent we headed along the Warburton Highway very briefly before turning down Wares Road — the first dirt section of the day — and then on to the Lilydale-Warburton Rail Trail.

A bunch of about 10 of us exited the rail trail at the Launching Place Hotel and headed up Don Road to begin the long drag up to Mt. Donna Buang.

The first stretch is a roughly-11km climb from the start of Don Road to the Panton Gap, the top 3km of which is unsealed. In the 11km the road climbs roughly 450m — an average gradient of about 4%.

It never feels terribly steep, but with the unsealed section at the top, and the heavy 25mm Schwalbe Marathon tyres I was running on Sunday, the climb felt tougher than it might have. But, I was in great company, enjoying some great chats with the likes of Rohan Wills, Michael Krischunas and the man they call Eat More Lard.

At Panton Gap we took a right-hand turn and followed the sealed road a few kilometres up to the gate which shuts the road off to car traffic in winter. We clambered around the obstruction before continuing up the road, onto the dirt once again and further up the slopes of Mt. Donna Buang.

It’s about 16km at 4.6% from Panton Gap to the summit of Mt. Donna Buang — not a climb to be sneezed at, especially considering it’s virtually all on dirt, some of which is very soft at this time of year. But there are only a couple of steepish corners and for the most part it’s just a case of spinning away, avoiding the odd fallen tree branch and enjoying the great scenery and views throughout.

I rode this section while having a good-old yarn with The Cyclist Formerly Known as the Donvale Demon, who’s currently doing base training for a tilt at the fabled and head-shakingly-hard 10 Donnas in a Day, made famous by occasional The Climbing Cyclist guest blogger, George Mallory.

In preparing for his ridiculous day on Donna, the Once-Demon has started recording this thoughts here. Check it out: it’s well worth a look.

Last year’s Donna Done Dirty was punctuated by a surprise soup kitchen a few kilometres from the summit of Donna and it’s fair to say Andy had to do something pretty special this time around to improve on that experience. But he didn’t disappoint.

Just where the Healesville-Mt. Donna Buang Road meets the main climb up Mt. Donna Buang, Andy’s family had set up a “high-altitude high tea” with scones, jam and cream, hot chocolate and a bunch of other greatly-appreciated goodies that warmed the soul and prepared us for the final kilometre to the summit.

It’s these little touches that make the Hells 500 rides so memorable. I know how much effort Andy and his family would have gone to to make it all work, and it’s all done so thanklessly, just to create a memorable experience for the riders. They even lugged a generator up there so they could fire up a microwave to heat up the scones. That’s class.

But the ride’s $20 entry fee didn’t just get you a high tea. You got a sharp-looking Hells 500 musette, a pair of merino wool Hells 500 winter socks (which I’m wearing right now — toasty), some hand warmers and a bunch of other goodies.

Despite the fact there’d been snow at the summit of Mt. Donna Buang a few days earlier, the only snow up there on Sunday was a few blocks of ice scattered here and there. ‘Twas a shame, but a lack of abundant snow certainly didn’t mean it was warm at the top.

I put on all the warm gear Team van Bergen had couriered up the hill for me — just another part of the service –including a beanie, scarf, two pairs of gloves, two jackets, two pairs of socks and more — and rolled gently down the sealed road to Warburton.

It’s probably the warmest I’ve been descending Mt. Donna Buang in winter, but there was still room for improvement. Somehow my chest was cold, even though I had four layers between it and the outside world.

Back in Warburton I pulled into the bakery and indulged in some pumpkin soup (which Andy might well have organised, if I’m not mistaken) and a bunch of other tasty treats. It was great to get some food in the belly, and even better to stand around and have a chat with a bunch of the great folks that make up the Hells 500 family. Andy and the gang really do attract a nice crowd of people.

After a while it was time to head back to the car and head home, another memorable Hells 500 ride in the bag.

Sadly, the illness that had hampered me in the lead-up to Donna Done Dirty mustn’t have run its course before Sunday because that night I felt worse than I had before. In fact, I’ve spent most of this week home sick, hence why this post has taken me so long to write.

I think it’s fair to say I’m itching to get back out on the bike. Amy’s Gran Fondo is coming up on September 15 and while it was a great ride last year, and I’ll probably end up doing it again, I reckon I’m more excited about a handful of other group rides a little later in the year. Stay posted for more info.

Until then, thanks very much for reading and be sure to check out this great video from Donna Done Dirty courtesy of Chris O’Connor and some extra photos Andy and I snapped throughout the day.