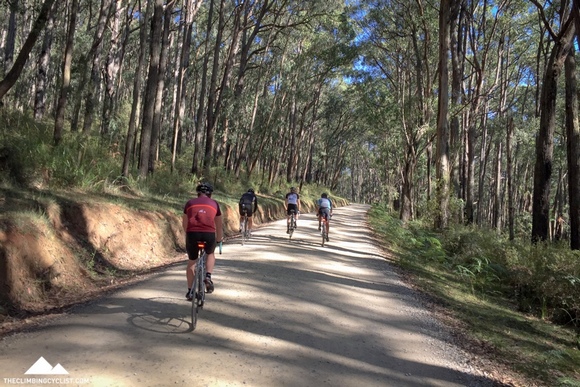 There are few more enjoyable things as a road cyclist than riding on a freshly laid patch of super-smooth hotmix bitumen. You glide over the silky surface with seemingly neglible rolling resistance, getting maximum value for each pedal stroke. Indeed, a smooth road surface can be the difference between feeling like you’re fighting for every metre and feeling like you’re flying across the landscape.

But as satisfying as smooth road surfaces can be, I’d argue there’s just as much fun to be had at the other end of the spectrum: riding a road bike on unsealed roads.

If you’re new to road cycling and/or have tended to stick to sealed surfaces on your road bike so far, taking that first pedal revolution on the dirt can be a nerve-wracking experience. But it doesn’t need to be. Here’s what you need to know about riding your road bike on the dirt and why you should give it a go.

One of the most appealing things about taking your road bike off road is the sense of adventure that comes with doing so. It feels like it shouldn’t be possible to traverse small, gravel-strewn roads on thin tyres, but when you realise it is, it’s a real light-bulb moment. All of a sudden, so much more of the map is within your grasp.

If you’ve lived in any one area for a while, you’ll probably be familiar with all the great sealed roads within your reach. Chances are you aren’t as familiar with the unsealed roads. Being willing to leave the bitumen opens up so many more possibilities when it comes to ride options, creating loops that wouldn’t otherwise be possible and generally just seeing different parts of the world around you.

The great thing about unsealed roads is that they’re almost always smaller and with less traffic than their sealed cousins. I can’t ever remember being disappointed at having a road to myself while riding. There’s a real tranquillity in heading off down some unexplored stretch of road just to see where it goes; even better when it’s just you, your bike, maybe a couple of mates, and the birds in the trees around you.

The first question many people have when considering an off-road ride for the first time is: “won’t I get lots of punctures?” There’s little doubt that your chances of getting a puncture increase when you leave the sealed stuff behind — largely due to pinch flats — but there are steps you can take to reduce that risk significantly.

With that in mind, here are some tips for riding your road bike on unsealed roads:

Standard road bike tyres are 23mm wide with 25mm tyres becoming increasingly popular as well. I’d recommend something in a 25mm option if at all possible — the extra width seems to provide extra grip on the rough surface. If your frame will allow you to fit tyres even wider than 25mm then that’s not a bad option either.

Bear in mind that the wider your tyres, the less efficient you will be (UPDATE: Turns out this isn’t necessarily the case!). This is more of a problem if your ride is a mixture of sealed and unsealed roads. Ultimately it’s a compromise between efficiency and comfort/handling. Do what feels right to you.

Arguably as important as tyre width is the thickness of the tyre. I know many guys that happily ride unsealed roads on 23mm Continental GP4000 tyres. If you’re going to stick with a 23mm tyre, go for something that’s a little thicker and/or grippier than your regular road slicks.

In the past I’ve used 23mm Continental GP4000 tyres on unsealed roads and had no problems. I currently use 25mm Challenge Strada open tubular tyres when riding off-road. I’ve also used 25mm Schwalbe Marathons which are absolutely bomb proof but at a cost — they’re quite heavy and they’re tricky to get on and off your rims.

It’s not a bad idea to let a bit of air out of your tyres if you’re going to be riding a lot of gravel. This will allow your tyre to “stick” to the road better, providing you with better grip, particularly when cornering. It’s a trade-off though — let too much air out and you’ll make it harder for yourself when you get back on the bitumen.

I tend to run my tyres at around 110psi when I’m riding exclusively on sealed roads. I’ll often drop that to 90-100psi if I’m going to be throwing some gravel into the mix. You can get away with lower than that too; ultimately it comes down to personal preference.

Even with appropriate tyres you are more likely to get a puncture on the gravel than on the tarmac. Be prepared for this — take an extra spare tube or two. And while it might sound obvious, be ever-vigilant when picking your line through the gravel. Hitting sizeable stones at speed isn’t the best option if you want to remain puncture-free. 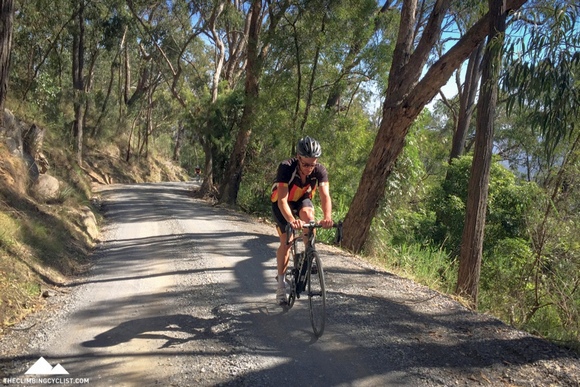 When you’re starting out, be cautious in the corners

It sounds obvious, but cornering becomes a little more tricky when you’re riding a road bike on the dirt. You don’t have as much traction and if you get it wrong you can easily send the back wheel sliding out.

Take it slowly to begin with. Really concentrate on putting pressure on your outside leg when cornering, keeping a low centre of gravity, and paying attention to how the bike responds. After a little while you’ll feel much more confident and you’ll probably realise that you can push the bike a lot further on the gravel than you might have expected.

Try to stay in the saddle when climbing

This is one you’ll work out pretty quickly on your own but if you get out of the saddle while climbing a steep, unsealed surface, your back wheel is going to start slipping. Your best bet is to stay seated when climbing on gravel, concentrating on keeping your weight nice and balanced — too far forward and the back wheel still might slip; too far back and the front wheel might lift up, especially when the road is super-steep.

Feel like trying out some unsealed roads on your road bike? A good option is to do a little bit of research before you set out on your ride. Google Street View can sometimes give you an idea of the road surface and whether it’s passable on a road bike. Sometimes and old street directory can come in handy as well — here in Melbourne the Melways shows which roads are unsealed; perfect for planning your little off-road jaunt.

If you’re planning out a specific ride be sure to allow more time than you might expect for the gravel sectors. It will be slow going — give yourself enough time to enjoy it without pushing yourself to get back on time. For me personally, I count on an average of 23-25km/h on sealed roads (depending on how hilly it is); on unsealed roads I’d expect 15-20km/h, again depending on the climbing.

Leave the bling at home

Got a $10,000 aero-optimised road bike with $5,000 carbon wheels? Probably best to leave it at home when riding on the gravel. Take your back-up bike or at least take off those expensive carbon wheels. All you need is something sturdy and comfortable — you’re going to be going slow anyway so your 80mm deep profile carbon wheels probably aren’t going to help all that much.

While research and planning is obviously important, be willing to check out that interesting-looking unsealed road you just spotted out the corner of your eye. Some of the most memorable rides I’ve ever had were when I said “what’s down there?” and went and checked it out.

You might discover a nice alternate route to where you were going, a challenging little climb or an amazing strip of road you would never have found otherwise. Explore!

Be willing to turn back

You’ll be surprised just how bad the road surface needs to get before you can’t ride it on a road bike. But there will be times that it simply isn’t rideable. Just bear that in mind, particularly if you’re exploring a road for the first time. Better to retrace your steps and stay out of trouble than come a-cropper on a 25% gradient rock-strewn descent in the middle of nowhere. 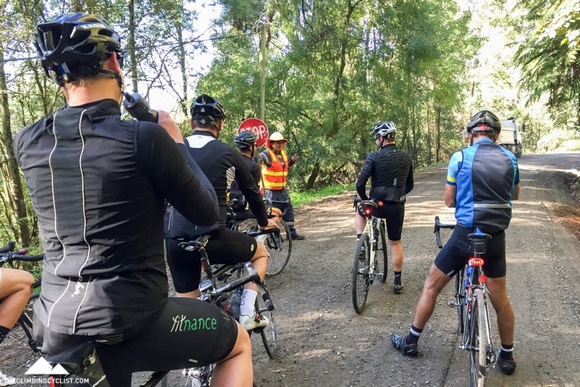 Let someone know where you are

If you’re going way off the grid, take a mate with you or at least let someone know where you’re going to be. The advantage of riding reasonably busy sealed roads is that if something happens to you, you’ll normally be spotted quite quickly. If you’re on some narrow, winding gravel road, deep in a national park away from anyone, assistance is likely to be a little further away.

If you’ve got the option, considering riding up on the gravel and down on a sealed road

This won’t always be possible, but just bear it in mind when planing out your routes. Climbing an unsealed road might make for slow going, but the low speed makes it very unlikely you’ll get a puncture. Bombing down a gravel descent is far riskier.

One good example is the unsealed climb up to Mt. Donna Buang (see links below). It’s totally possible to do that climb on 23mm road tyres — probably even on slicks — but coming down it is another story. A popular ride involves riding up on the dirt to the summit then descending the sealed road back to Warburton. As an added bonus you can jump on the Lilydale-Warburton Rail Trail to get back to wherever you started. 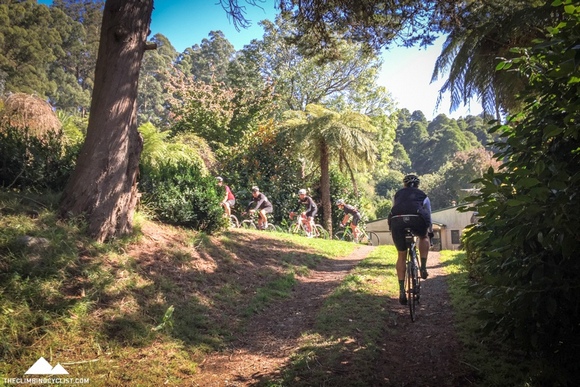 I’ve been fortunate enough to do a number of great rides on unsealed roads in the past few years. Here are some links if you’d like to read more about specific rides and roads:

So, what are you waiting for?! Get out there and enjoyed riding your road bike on unsealed roads!

What have I missed? Are there other tips you’d offer to riders trying unsealed roads for the first time?