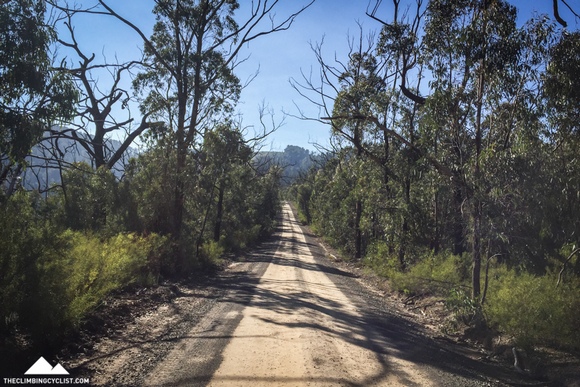 The great thing about riding the same roads over and over again is that when you decide to deviate from the familiar, it feels all the more satisfying. Take the Dandenongs for example. On most visits I’ll do a combination of the more common climbs, like the 1 in 20, The Wall and so on. But when I head out there to, say, ride a bunch of the lesser-known dirt roads that snake across the mountain, it’s a welcome departure from the norm.

The same can be said of Kinglake. Like most Melbourne-based road cyclists, there are only really two routes I tend to take to get into the Kinglake Ranges: the very popular main climb and, occasionally, the quieter Humevale Road on the other side of the range. On very rare occasions I might come up the main road from Whittlesea or via the Toolangi approach, but I can count the number of times I’ve done so on one hand.

On Sunday, though, I decided to take my own advice and check out one of the lesser-known roads into Kinglake: the unsealed and very tough Bowden Spur Road. 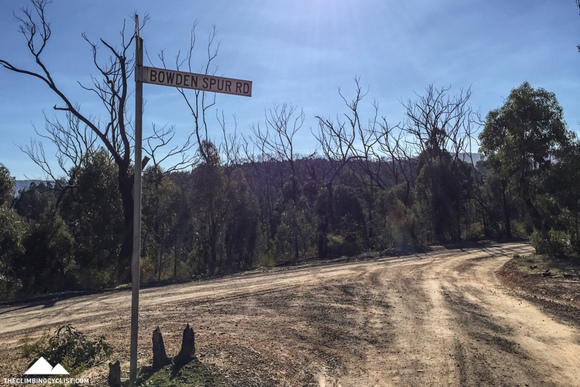 You might have seen photos of this climb — it’s notable for a couple of nice switchbacks and for the gigantic power lines that cross the road on their way up the hill. I’d seen such photos and was keen to give the climb a try.

Where the main Kinglake climb winds its way up the hill at a reasonably friendly gradient, Bowden Spur Road more or less heads straight up the hill with only a couple of corners to reduce the gradient. Depending on where you measure the start and finish of the climb from, it’s either 3.6km at 9% or 2km at 12% for the steepest part. Regardless of how you slice it, it’s a very challenging climb.

I was riding my regular road bike (Cannondale CAAD10) with 25mm Challenge Strada Bianca open tubular tyres and I had very few issues with traction. The surface is quite hard-packed, and any loose gravel can be navigated around without too much difficulty.

I’d certainly recommend a compact crankset though. Even with a 34×28 setup I was grinding away on the steeper stuff.

The climb itself starts in Stathewen and rather than riding the regular way there (via Hurstbridge then Cottles Bridge) I thought I’d take a different route on some roads I’d never fully explored. Broad Gully Road, Mine Road, Hildebrand Road — they’re all great little stretches of tarmac, quite lumpy in parts and with very little car traffic. Perfect.

I descended Hewitts Road to join the main road that leads to Strathewen and was pleasantly surprised how steep the descent was. I think I’ll have to come back and try out that road in the opposite direction (it’s 800m at 10% according to Strava).

From Strathewen itself I opted for the steep rise of School Ridge Road which eventually joined up with Bowden Spur Road a few kilometres later. Next time I’ll take Bowden Spur Road from the start to see what that’s like.

There’s some steep climbing on Bowden Spur Road before you even get to the main climb, and while it’s not as relentless as the main section of climbing itself, the gradient and the loose road surface will still have you seeing single-digit speed readings on your cycling computer.

The climb proper starts with a long, straight, steep drag up to a right-hand switchback before a 100m flat section with great views over the valley as the power lines bristle overhead. As the road bends left the gradient kicks up again and it’s back to the grind until the road flattens out sometime later.

The road spits you out in Kinglake Central, 3.5km north west of where the main Kinglake climb ends. I headed in the opposite direction, however, descending Humevale Road for the first time then taking Plenty Road all the way back to town.

Click here to read more about the Bowden Spur Road climb at The Climbing Cyclist Wiki. And if you’ve got a climb you’d like to add to the wiki, please go ahead!

I’ve been reliably informed that as steep as Bowden Spur is, there are two other unsealed approaches to Kinglake that are even tougher. Beale Avenue and Bald Spur Road both run more or less parallel to Bowden Spur Road as they climb the range, the former to the north west, the latter to the south east.

I’ve had strong riders tell me they struggle to get up Bald Spur Road, even on a cyclocross bike with 33mm tyres and a 36×30 gear setup. Might be one for the mountain bike!

If you know of other unsealed roads, including climbs, near Melbourne that are an enjoyable challenge on a road bike, I’d love to hear your thoughts in the comments below.

In addition to exploring some new roads, Sunday’s ride had another purpose. For the first time in a while I’ve got something to train up for, namely the Muju Gran Fondo in South Korea in mid June. The ride is 140km long with around 3,000m of climbing, including some very steep pinches along the way.

I got an invite to the ride through my job at CyclingTips and decided I should probably try to cram in some training, given I haven’t been doing as much riding lately as I normally would. In fact, Sunday’s ride was the first time I’ve ridden more than 100km since my trip to the Snowy Mountains in early March.

I haven’t got much time before the gran fondo, but I’m hoping that a couple more hilly, 100km+ rides will get me through it.

And finally, just a really quick word about the website. As you might have seen, the good folks at Cycles Galleria have come on board as a supporter of the site in the past month and for that I’m very grateful. It takes a lot of time and energy to keep The Climbing Cyclist running and it’s certainly not without its costs.

It’s the support of great local brands like Cycles Galleria that helps make it possible for me to continue working on this website one day a week and providing content that, hopefully, you enjoy reading/viewing/watching.

So, if you like this site and/or have gotten value from it in the past, why not click through to the Cycles Galleria website via the ad at the top of the sidebar and take a look around at what they have on offer?

Until next time, thanks to you all for reading and for your ongoing support!

27 Replies to “Exploring Kinglake: Bowden Spur and other new roads”