After two weeks of the Ride Hard to Breathe Easy Challenge on Strava I’d amassed more than 600km. I was well ahead of schedule and, at that point, only injury or other mishap could have prevented me from reaching the 800km target.

Now, after three weeks, I’ve completed the challenge, having covered more than 900km. But I’m not stopping there. I’ve got just over a week to see how many more kays I can do. In the meantime, here’s how week three unfolded:

Having raced the day before and covered a total of 150km for the day, I was keen to spend Sunday recovering. I did just that, resting up for the week ahead.

An early start at work meant I couldn’t get in many kays before getting to the office but I did manage a couple of laps of Princes Park.

The Donvale Demon and I left the office early (we work together here) and had a rolling meeting, spinning slowly around the Brunswick Velodrome as we chatted about work. It was a great way to kill two birds with one stone — we got to discuss work issues while also clocking up some kays for Ride Hard to Breathe Easy.

I set a new personal-best time on the velodrome too: 23.8 seconds for a lap. Strava interpreted this as 23 seconds though, giving me an (overestimated) average speed of 51.7km/h and landing me in the top ten.

Not much to write about here. Straight to work and straight home.

Where Tuesday had been lazy and boring, Wednesday was anything but. The Demon and I met at (yep, you guessed it) the Brunswick Velodrome before work and spent some time riding tempo, taking turns at the front. We kept the pace above 33km/h for quite a while, eating up the kays and giving ourselves a fair workout in the early-morning frost.

After work it was back to the B-Drome, this time to meet with the lads from Team Equipo Tranquilo. Fletch and Douggie had been at the track the previous Wednesday to do some laps with the lights on. When I arrived just before 6pm the light was fading fast and the lights weren’t emitting so much as a flicker of illumination.

Fletch and Adrian rocked up at around 6.45pm and by that point it was virtually pitch dark — far from ideal conditions for cycling. But then, just as we were about to call it a day, the lights roared into life and the velodrome was lit up beautifully. It was just on 7pm and a local soccer team had paid to have the lights on (despite a Brunswick Cycling Club official telling Douggie on the phone, in no uncertain terms, there was no way the general public could pay for the lights to be turned on).

A bunch of us rolled around the track, timing each other, having short races and doing some tempo work toward the end. I managed to take .3 of a second off my best: a new best lap of 23.5 seconds.

By the time I got home (at about 9pm) I was knackered. I’d ridden about 90km for the day on top of a full day’s work and I was well and truly ready for bed.

After two longish rides the day before I was feeling pretty sluggish on Thursday. I rode straight to work in the morning and had no real desire to head out for a longer ride in the evening.

But later in the day Brendan messaged and said he was rolling around Yarra Boulevard racking up some kays. I rolled out to meet him and in the dwindling daylight, we did a couple of laps of the crit circuit at the Johnston Street end of the ‘Vard  (which is just a little tougher than the Brunswick Velodrome!) before riding up to Walmer Street and back down to Chandler Highway.

Having ridden in the dark along the ‘Vard a few weeks earlier neither of us were all that keen to press on and so we headed home after a half lap. I wasn’t too disappointed — I was still feeling sluggish from the big day on Wednesday and I was keen to get home and take it easy.

With rain around in the morning I decided not to ride to work on Friday and in the process I stranded myself six kilometres short of the 800km target going into the weekend. The Demon wasn’t fazed by the weather and leap-frogged me to finish the Ride Hard to Breathe Easy Challenge a day before I did. Chapeau Demon!

What a wonderful way to complete the Ride Hard to Breathe Easy challenge — 110km on some of the best roads around Melbourne in perfect weather.

Early discussions suggested we might have had a large group for this ride but in the end it was just Brendan, Douggie and I. I was keen to revisit some of the roads I used to ride frequently when I was living in Eltham and so we rolled out along Heidelberg Road and Lower Plenty Road.

Before getting to Eltham we took a right turn on to the popular Mt. Pleasant Road. It’s a remarkable little road and one that I’d highly recommend checking out. It’s so close to Eltham and yet, within minutes, you are in what appears to be a rural landscape. The road also features a couple of challenging little climbs and a handful of tasty descents too.

We took a left at Warrandyte-Research Road and a right at the roundabout. The climb out of Research toward Kangaroo Ground is one of my favourites and one that I used to have a crack at whenever I had a chance. On Saturday I gave it a fair old shake, taking more than a minute off my previous best. I ended up with a time of 5 minutes and 4 seconds, placing me 13th out of 525 riders on Strava. I’ll take that any day of the week.

We battled our way through the familiar and ever-painful rollers to Kangaroo Ground before taking Flat Rock Road toward Hurstbridge. It’s a road I’d heard a bit about but never ridden and one that I’ll definitely be heading back to at some point. It’s a beautiful narrow road with some great valley views, very little traffic and a wonderful descent as you near Hurstbridge.

We followed the road toward Cottles Bridge before heading out toward Strathewen. I’d heard a couple of people talk about riding out there but, again, it was a road I’d never experienced. The lack of traffic meant we could ride three abreast and chat while chewing up the kays. 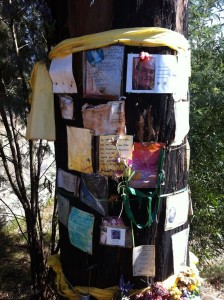 As far as we could tell though, Strathewen isn’t much more than a couple of rural properties, a bus stop and a school and so we turned around and headed back out. If we missed something, please let me know in the comments below!

On the way back to Hurstbridge we decided to go via Arthurs Creek and Nutfield and wow, what a stunning part of the world. Virtually empty roads, great scenery, nice little rollers … couldn’t ask for more really. I know I’ll be heading out that way again soon.

We stopped at Hurstbridge for a bite to eat before rolling out. We’d had a quick discussion about which way to go home: up the Flat Rock Road climb or the easy way, out to Diamond Creek and back along Plenty Road. With no-one having strong objections to the climb, we retraced our steps and headed out to Flat Rock Road.

All in all it was a wonderful day’s riding. Thanks to Brendan and Douggie for being part of it. Brendan looked super-strong as always (despite having done less riding of late) and Douggie was super-impressive for a guy who’s only ridden twice in the past month or so. I shudder to think how strong he’ll be once he starts to ramp up his training!

And with that, I’ve reached my target of 800km for the Ride Hard to Breathe Easy challenge. I’ve managed to average more than 300km a week which I find somewhat surprising. If I can do 300km this week I will have amassed 1,200km in April — far more than I would have expected.

But before I get too self-congratulatory, it’s worth noting that the challenge’s leader, Guido Gadomsky, has racked up a lazy 3,144km so far this month. I was excited about doing 1,000km+ in a month; this guy’s doing 1,000km+ a week! Crazy.

And while we’re on the subject of crazy numbers, more than 4,400 people have now entered the challenge, notching up more than 2.5 million kilometres between us. A wonderful effort and one that’s well in excess of what the organisers were planning (and hoping) for. Well done to you all!

And finally, here’s a bit of shameless self-promotion. My good mate Matt Smith and I made a short piece for ABC Radio National’s Off Track about climbing. I’m planning on writing a behind-the-scenes post about it in the next day or so, but in the meantime, head over to the Off Track page, take a listen and let me know what you think.

If you haven’t already joined the Ride Hard to Breathe Easy challenge on Strava, get on it! It’s free to enter and all you need is a smartphone with the Strava app or a compatible Garmin device.

One Reply to “Ride Hard to Breathe Easy: week three”