At 2pm today, ABC Radio National is airing a repeat of an Off Track episode in which my good friend Matt Smith and I talk about the joy of climbing.

I thought I’d put together a quick behind-the-scenes post to give you all a bit of insight as to how the program came about and how the day of recording unfolded. 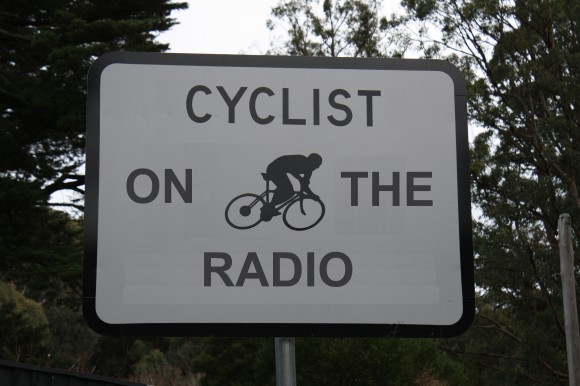 It all started with a couple of beverages at the Wesley Anne bar in Northcote.Toward the end of the conversation Matt suggested we should pitch a story to Off Track about this website and about climbing more generally. I thought it was a great suggestion and we decided to put together a couple of ideas and reconvene before sending the proposal off to Radio National.

The very next morning, out of nowhere, I got a tweet from Joel Werner, the presenter of Off Track, asking if I’d be interested in putting something together for the show. I explained the strange coincidence to Joel and we agreed that Matt and I would put together a pitch.

The next week, Matt sent over his ideas to Joel and we got the green light: time to start recording.

The premise was simple: get Matt, a non-cyclist, to climb a hill in order to get a feel for it. He would interview me about climbing at the site before and after the climb and then we’d record some background audio. I think Matt was a little apprehensive about the climb and fair enough too: he’s only done a bit of cycling in the last few years and I suspect he sees hill-climbing as more of an inconvenience than a pleasure.

So on an overcast Saturday morning in late March Matt and I drove out to The Basin to tackle what is probably the most well-known climb in the vicinity of Melbourne: the 1 in 20.

After a quick pre-ride interview in the park near the Basin shops, we saddled up and headed over to the start line and got stuck into the 6.8km climb. To my great surprise, Matt took off like a rocket, sitting comfortably on about 25km/h as he powered toward the first bend. It took me a couple hundred metres to reel him in and by that time Matt was spent. He’d gone out way too hard and was already paying the price.

After roughly 2km Matt pulled off to the side of the road for a quick breather and a drink. With what must have been wishful thinking Matt asked whether we’d reached the halfway point yet. I tried to let him down gently, softening the blow with promise of the glorious false-flat a few kays up the road.

We stopped a number of times on the way up and after each rest-stop Matt would disappear up the road in a flurry of pedal strokes before realising, once again, he’d gone out too hard.

It took us a little under 40 minutes including rest stops, but we eventually got to the top. We pulled into the gravel carpark at the top of the climb and took a seat on some wooden logs. Matt pulled out his recorder and interviewed me about the appeal of cycling up hills (I don’t think he enjoyed it too much!) and about the origins of the site.

In the program I mention that the website started as a university assignment, which is totally true. What I didn’t mention is that my tutor for that particular subject at La Trobe University was none other than the gentleman interviewing me.

Matt works in the Media and Communications department at La Trobe (I did too for a while) and it’s actually his job to record, edit and publish podcasts, including for the university’s iTunesU page. (If you’ve got some spare time, go and take a listen; Matt does a great job.) 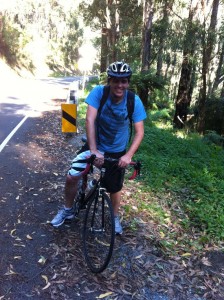 So when the regular tutor for my journalism subject was unavailable to teach at the start of the course, Matt was called in to help out. He actually oversaw the very first incarnation of this site. I’m not sure if he even remembers that, but I certainly do.

I also remember Matt showing us how to use WordPress (the platform this site is built on) by creating ilovelionelrichie.wordpress.com (now sadly defunct), much to the amusement of my fellow students and I.

After recording our finish-line interview I spent a few minutes riding up and down the final 200m of the climb with a lapel microphone attached to my rear wheel’s quick-release lever, picking up bike and road noise for the show.

We then rode back down the hill, packed up the bikes and drove back toward the city, the  recording complete in under two hours.

Over the next week or so Matt edited the piece together, cutting out the many ums and aahs I’m sure I uttered and generally getting it ready for broadcast. I think it turned out really well, which is not surprising given Matt produces podcasts for a living and worked in radio for a number of years.

From my point of view it was good fun to be part of the program and to be able to talk about the site and my passion for climbing. That story I mention in the program about climbing Mt. Buffalo for the first time is one of my very fondest memories, cycling or otherwise.

I remember Dad asking me at the time if I was sure I really wanted to do it and when I said I was, he took the time to make sure I was safe, driving just ahead or just behind me the whole way up. Incidentally, Brendan was on that ride too but he didn’t quite make it to the top, calling it a day after 8km. Still a monster effort giving he was, what, 13 at the time?

And while I think of it, here’s a quick correction. In the program I mention that A-grade riders climb the 1 in 20 in about ’14 or 14 and a half minutes’. I now realise I was overestimating slightly. There are a bunch of A-graders who have broken 14 minutes, including Jason Spencer, who managed a staggering time of 13 minutes 20 seconds up there just a few weeks ago. That’s an average speed above 30km/h — truly scary.

So, if you haven’t yet listened to the program, please tune in to Radio National at 2pm today or download the podcast from the Off Track website.

And do let me know what you think, good, bad or otherwise. Someone on Facebook (thanks Mariano!) mentioned he’d listen to a Climbing Cyclist podcast (‘with the Demon as your sidekick’) if we made one — what do you reckon? Would you listen to a climbing-related podcast?

Thanks very much for reading and thanks too to those of you that sent over kind words about the Off Track piece. If you haven’t already, come and follow The Climbing Cyclist over on Twitter, come and ‘like’ us over at Facebook and, of course, you’re always welcome to leave a comment below.

11 Replies to “Off Track on ABC Radio National: behind the scenes”