Victorian readers would be familiar with challenge rides such as Around the Bay in a Day and the 3 Peaks Challenge but there are a host of other terrific such rides around the country. Once such ride is Bicycling Western Australia’s 5 Dams ride. In this guest post, Melbournian Aaron Twigg describes his trip out west to ride 5 Dams.

I’ve been back riding bikes for about four years now after a long siesta. I am by no means a hill climber and I have to train harder than some just to keep up in the hills. Even then I get dropped with little effort. I know I will never be the fastest in the hills, but I get in a rhythm and keep plugging away. Importantly, I enjoy every moment on the bike!

The idea to ride 5 Dams first came up after a ride with a fellow Look Bike Club member, Howard, in Perth back in February 2010. He briefly mentioned 5 Dams while he guided me through a tough 100km in the hills of Perth. The seed was planted.

The ride is organised by Bicycling WA (BWA) and comprises two options: 3 Dams covering 148km or 5 Dams covering 238km. Both options have a list of categorised climbs with the 5 Dams option including two category 3 climbs, two category 4 climbs and five category 5 climbs. All of these climbs add up to more than 2,500 vertical metres of climbing.

That might not sound a lot to you hill junkies out there, but for me, a non-climber, it’s a lot!

Luckily for me, BWA requires you to ride 5 Dams with a partner. So I had to convince someone to follow me to Perth and share the experience.

I managed to convince my friend Andy to make the trip west with me and from then on the trip became a reality. We registered and started training for the biggest ride we had ever attempted.

The hills I had previously ridden in Perth had given me an idea of the challenge ahead and I knew I would have to really plan my preparation. With the Dandenongs not far away I had a nearby training ground to help build the strength required to climb over such a long distance.

A few days in Dromana prior to New Years Eve 2011 kicked off my preparation. Over the next three months I slowly built up my training with the majority of my time spent in the hills riding roads like The 1 in 20, the Mt. Dandenong Tourist Road, Ridge Road, Perrins Creek Road and, of course, The Wall.

Andy lives out near Geelong so there were a few days spent in the hills around Anakie including a 130km return trip to Lorne.

The Otway Classic was the final springboard for my training. From there it was on to longer rides with more and more climbing and several back-to-back centuries including a weekend with 240km and over 4,000 vertical metres  of climbing!

I have learnt from previous training that if I can back up the next day and do it all again I am on my way to the fitness level needed to complete a ride like 5 Dams. I left Melbourne with 2,200km and 3,300 vertical metres of climbing in my legs and the lowest average heartrate I had had for a while.

Once In Perth I stayed with my dad in Bunbury and continued my training with the South West Cycling Club (SWCC). This is an awesome club that has the best training rides I have ever come across. They are extremely well organised, professionally run and attended by a great bunch of people. I took the advice given on the BWA website recommending short and hard rides in the final week. SWCC catered for that perfectly!

The day before the ride was a busy one with a 60km guided ride around the Swan River with Howard, including a ride-by of the 5 Dams start line. This was followed by pre-registration at BWA which unfortunately ended in disappointment, when they informed us our jerseys had accidentally been given away to someone else. Worse, there were no spares. Our Around the Bay in a Day jerseys would have to do!

The night before the ride we each had a big bowl of pasta for dinner, before making final preparations including a weather check: sunny and 28° with a south-westerly in the afternoon. Terrific!

We laid out our clothes and gels, filled our bottles and Andy stuck the ride directions on his top tube so we didn’t get lost. Finally it was time to hit the hay with our alarms set for 4:45am.

I was awake before my alarm went off – this was it! We got out of bed, got dressed, got on our bikes and rolled over to the start. We arrived a bit early allowing us time to chat to a few people that had done the ride before. A bit of local knowledge always helps and it was here we were warned about the 15km westward stretch toward the end of the ride that takes you across to the freeway.

The riders who had completed the event before said if we were in a group at that point, stick with them as the south-westerly will really take its toll on the solo rider. 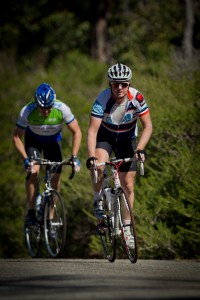 At 6:15am we got underway and a few big groups headed off into the 23km-long, flat warm up before the first and longest climb of the day – a little under 7km. At the bottom of that climb we each settled into our own rhythm. I climbed comfortably and caught some of the riders that passed us earlier in the day.

The first dam was Mundaring Weir. With our passports stamped, we climbed the 8% gradient out of the checkpoint full of confidence. After all, we had an average speed of 27km/h — well above our expectations. That confidence took a bit of a dent when a few people cruised past on single-speed flat-bar bikes, never to be seen again.

The trip across to Churchman Brook Dam was familiar territory as I had ridden it the opposite way back in 2010. It was definitely easier this way with some awesome views across the valley and some fun, high-speed descending. But I had made a pact with Andy to use the descents as a chance to recover and not tire the legs out. I did my best to hold back.

The climb into Churchman Brook was over 10% with the checkpoint half-way up the climb. From there it was more climbing out to the Albany Highway followed by a long, fast descent,  and another tough climb (about 13%) to the checkpoint at Wungong Dam for lunch.

Three down, two to go.

We fuelled up with a wrap or two, a few pieces of fruit cake and a few gels before refilling our bottles for the third time that day. We then climbed out of the checkpoint and headed for the fourth stop: Canning Dam.

By this time we were beginning to get a sense of what the ride was all about. With another long descent and another nasty climb up to the dam wall we felt like yo-yos. With another stamp in our passports, we consulted Andy’s top tube for the distance and directions to Serpentine Dam.

We made sure our bottles were full for the 53km journey to the next checkpoint before rolling out. The long descent into Canning meant a long climb out and again the gradient crept above 12% for at least a kilometre.

At the top of the climb we took a left on to the Albany Highway and on toward Serpentine Dam; the fifth and final dam and our second-last checkpoint.

The trip to Serpentine was a long, hot stretch of continuous undulations which seemed to hurt more than usual. But we had managed to bring the average up again – to around 24.5km/h – by the time we’d arrived at the checkpoint.

Having reached the final dam, we decided to take an extended break. We even took our shoes off to cool our feet as the temperature was starting to climb. Andy consulted his top tube as I filled my bottles. He informed me that the climb out of Serpentine was the last major climb of the day — yay — and there was a steep descent not far up the road to finish our time in the hills.

After finishing the final climb out of the Serpentine Dam, I was really looking forward to making the most of the steep descent down Kingsbury Drive. And I did, easily reaching speeds of 70km/h+ on the way down to the South West Highway. As we reached the highway the cycling gods shined on us, and we soon joined another pair of riders, just as the locals had advised at the start of the ride.

After a quick chat and introductions we decided to stick together for the windy trip across to the freeway, and windy it was. We worked well together sharing the load into the south-westerly headwind and we all arrived at the final checkpoint feeling better than expected.

After getting the final stamp in our passports we kept the group together for the final leg along the bike path to Perth. Luckily for us, our group contained some Perth locals which kept us from getting lost at some tricky, unsigned diversions thanks to path maintenance.

We crossed the line in 9 hours 15 minutes riding time, some two and a half hours behind the first finishers. More importantly we were 45 minutes under Andy’s estimate and an hour and 15 minutes below mine. I guess I need to learn to back myself!

Overall it was a great day — we’d covered 238km, climbed more than 2,500 vertical metres and visited five dams in the Perth hill. BWA have a bit of work to do to get this ride up and running to the standards we had expected after rides like Around the Bay in a Day and most other rides we have here in Melbourne. But I’m sure they will get there and in only the third running of the event they are well on their way!

We had a great day and achieved our goal with plenty of room to spare. I may go back in a few years to do it all again but for now it’s time for a new challenge and some bigger hills.

I would like to take this opportunity to thank Andy for heading west and taking on the 5 Dams with me, and sharing what turned out to be a great day on the bike! Thanks Andy!

Have you got a climbing-related cycling story you’d like to share? We’d like to hear from you. Just send an email to Matt with the details.