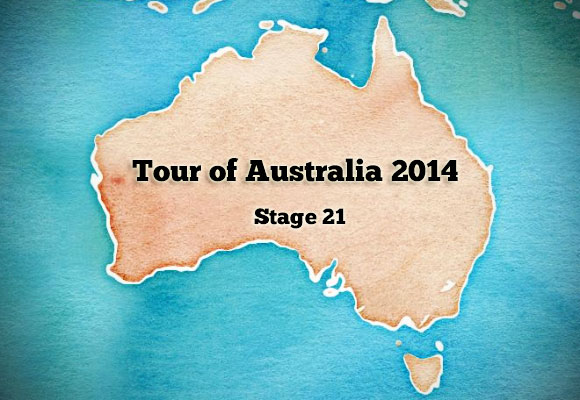 Inspired by the Giro d’Italia, the Tour de France and the Vuelta a Espana, the Tour of Australia is a fictional three-week Grand Tour route created by David Blom and Matt de Neef to showcase some of Australia’s best cycling roads. This is the second year of the race and today we reveal stage 21, the final stage of the 2014 edition.

Just like the other (read “real”) Grand Tours, the Tour of Australia finishes with a largely ceremonial final stage that gives the overall leader the chance to soak it all in before being crowned the victor, and the sprinters a chance at a final stage victory. In this year’s edition of the race, that final stage starts in the town of Port Arthur and takes the riders a little over 100km into Hobart where the stage and Tour comes to a close.

From Port Arthur the riders head north on Arthurs Highway, reaching the first of two categorised climbs after just under 20km. The climb is 2.9km at 6.6% average gradient with the fourth category ascent topping out after 21.7km of racing.

From the top of that climb it’s straight into a descent before continuing on the Arthur Highway through Dunalley and Copping, where the race heads west. From there, after 46km, it’s a little more than 20km to the day’s only intermediate sprint, which is contested in Sorell.

The riders then head northwest on Brinktop Road, hitting the second and final categorised climb of the day a short time later. That fourth category climb is just 2km long at an average grade of 5.3%.

After descending off the other side of that climb — the final climb of the 2014 Tour of Australia — the riders head through Richmond, before swinging south towards Hobart. The race joins the Tasman Highway after 97km and crosses the River Derwent after 105km, with the finish line fast approaching.

The riders follow the Tasman Highway right into the heart of Hobart, turning on to Davey Street (as they did on stage 20) before turning left on to the famous Salamanca Place for the final sprint.

There’s every chance that all the classifications in the Tour of Australia will be wrapped up before the final stage begins. If the KOM and sprint classifications are very close though, riders might head out in search of points on the KOMs and the intermediate sprint.

For the general classification riders, the hard work is more or less done by the time the final stage is underway. The final standings are almost certainly decided, the winner is likely to be sipping on champagne, and for those who just missed out it’s a chance to think back on what they could do differently the next time.

Expect the pace to heat up in the bunch after the second and final climb of the day (after 78km), if not before, as the teams of the sprinters try to get their fastmen perfectly positioned for a final stage win. It would be interesting to see how many of the sprinters actually made it through the race. We normally see sprinters drop out of Grand Tours after the early, flatter stages, but with sprint stages scattered throughout the 2014 Tour of Australia, there might be incentive for the sprinters to stick around.

And so the 2014 Tour of Australia comes to a close. It’s been a huge few months for David Blom and myself, putting together the route, fine-tuning the details, and arriving at something that, we believe, showcases just how great a Grand Tour would be in Australia.

Of course there are any number of options out there about where such a race could go, and we have plenty of ideas for future editions. But in the meantime, thanks so much for reading. I reckon between David and I we’ve put in close to 100 hours of work to get this “race” together, and it’s been exhausting. But it’s also been a lot of fun, particularly when there’s been discussion and engagement in the comments.

So, thanks for reading, let us know what you thought of the Tour overall in the comments, and we’ll be back with regular content next week.