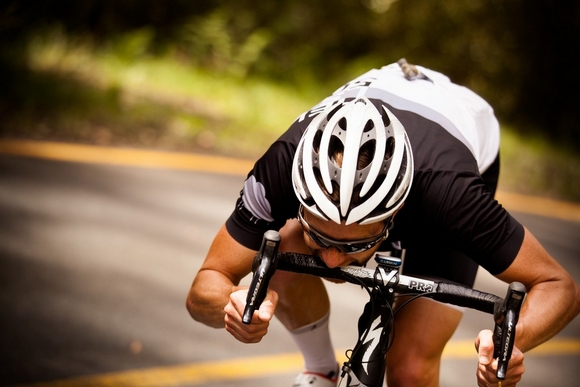 I’ve been asked many times in the past few years to order the 7 Peaks according to difficulty and despite having ridden all of them many times over, I still find it a difficult exercise. Is Mt. Buller the easiest? Or is it Lake Mountain, despite its steep opening kilometres?

And it doesn’t get any easier when you get to the hardest climbs of the seven. To me it’s always a toss up between Mt. Hotham, with it’s imposing length and brutal ramps towards the end, and Mt. Baw Baw with it’s brutal final section which averages more than 11% for the final 6.5km.

Whether you consider Mt. Baw Baw to be the hardest climb of them all, there’s no doubt it’s an extremely challenging climb. With this in mind, it was amazing to see 200+ cyclists at our pre-ride briefing at Tanjil Bren on Sunday morning, ready to take on the beast as part of our Domestique 7 Peaks Series. 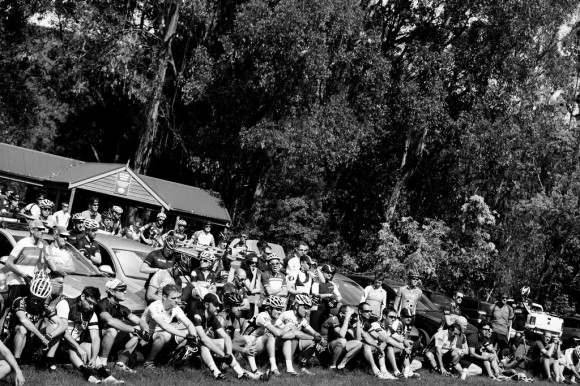 Some had driven straight to Tanjil Bren, some had done a short warm-up from Icy Creek, many had ridden out from Noojee and at least one person, Joel Nicholson, rode from Melbourne.

After camping the night at Toorongo Falls just out of Noojee, I met up with Andy in town and with a small group we rolled into the 32km ride to Tanjil Bren. I’d been slightly apprehensive about the ride thanks to a bout of patella tendinitis but the road from Noojee to Mt. Baw Baw is one of my favourites and I wasn’t about to miss it.

I took it reasonably easy the whole way there and thankfully my knee didn’t give me any grief. That said, the Vesper Hill climb isn’t easy even when you aren’t pushing it, particularly when you haven’t had a warm-up.

We were met at Tanjil Bren by our support crew and together we started setting up. Marquees were erected, hydration and merch stalls were set up, volunteers were given jobs and with the scheduled start time of 10am approaching, riders gradually trickled into Tanjil Bren, the atmosphere building.

At 10am Andy and I delivered a pre-ride briefing, including a few words from the Mt. Baw Baw Alpine Resort CEO Stuart Ord, and before too long our marshalls were sending riders off in waves. For the first time I had a chance to think about the tough climb ahead and realised that I was actually reasonably nervous. Sure, I’d done Baw Baw before, but I’d also been out of form and the Baw Baw climb has a way of punishing you if you’re not prepared.

I left Tanjil Bren as one of the last riders and quickly caught Andy and Paris Pollock on the descent out of town. As the road headed up straight after Big Tree Creek I rode alongside Andy and Paris, the pace feeling a little too quick for comfort.

Given the reputation Baw Baw’s got — thanks to its steep final 6.5km — many people forget about the 6km section of climbing that precedes it. With an average gradient similar to that of the 1 in 20 it’s not a particularly challenging start but there’s still a little bit of climbing to get through before you hit the steep stuff.

As we hit The Gantry and the road tilted skyward Paris and Andy danced away while I tried to find a comfortable rhythm. I remember pushing hard up that first ramp in a 25-tooth cog last year and feeling fine. This time around I was well and truly in the 34×28 and already looking for more gears inside the first few hundred metres.

I realised pretty quickly that there would be no forcing the pace for me (as I’d done last time around) — instead it would be a matter of survival; of finding a comfortable rhythm and just chipping away.

I never felt particularly comfortable on the climb and there were more than a few occasions when I reached down for an extra gear, only to learn that, surprise surprise, my cassette hadn’t magically sprouted a 32-tooth cog I didn’t know about.

As I made my way slowly up the climb I started reaching a big bulk of the group. Rather than climbing together in a group as they might have done on an easier climb (or on a flat road), the riders were strung out single file, everyone in their own little world of pain, a long line of carnage snaking its way slowly up the hill.

Having so many riders ahead of you is throroughly motivating and every time I passed someone I got a small jolt of adrenaline that spurred me on. But when the road’s tilted up at 13% overtaking feels like it happens in slow motion. I might have been going slightly faster than the people I was passing, but it would only have been a case of 7km/h compared to 6km/h.

I managed to chat to a few folks on the way up, in between laboured gasps for air, and this helped to pass the time and bring the summit ever closer. In the end I got to the top in around 48 minutes, roughly 9 minutes slower than my last effort — a reminder that I’m still a long way off peak fitness.

But despite being slower than last year, getting to the top was no less satisfying. And seeing the looks of jubilantion and relief on the faces of the 200+ riders that made it to the top was a timely reminder of one of the big goals of the Domestique series: helping riders to take on climbs they wouldn’t otherwise try.

There was an amazing atmosphere at the top with high-fives and hugs being dished out everywhere. The brutal difficulty of the climb only makes reaching the top that much more satisfying, particularly when it’s your first time. And for Andy and I, as organisers of the ride, it was amazing to see the buzz that we’d had a hand in creating. Thoroughly satisfying. 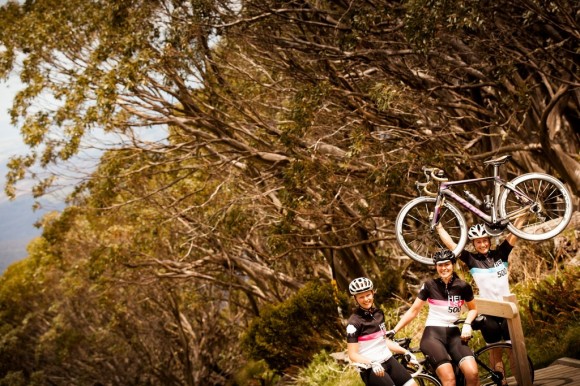 Sadly, an otherwise perfect day was tarnished by the fact that two riders crashed on the way down Mt. Baw Baw and were taken to hospital (one by ambulance, the other by helicopter). Seeing those incidents and the aftermath was a sobering reminder of the dangers of this pastime we enjoy so much. Next time you head out to Mt. Baw Baw please do your utmost to descend safely and within your limits, for your sake and for the sake of your loved ones.

Thankfully, both riders were quickly discharged from hospital — one on the same night that he arrived, the other the following morning — and both are in good spirits. The rider who crashed closest to the summit has a broken collarbone while the rider who crashed near Winch Corner suffered concussion and minor facial injuries. Both were exceptionally lucky. 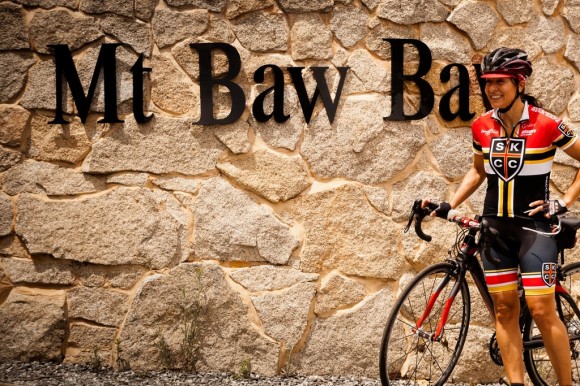 I’d like to say a huge thank you to Pete Caradei, Ethan Edwards and Dr Ryan McMullan for the superb medical care they provided to the injured riders. Watching these guys get to work was simply amazing and we’re more than thankful that they donated their time to help out.

Thanks too to everyone that checked to see if the riders were ok, and to those who stopped and offered their support, however minor. Seeing fellow cyclists jump in and help out like that was quite something. 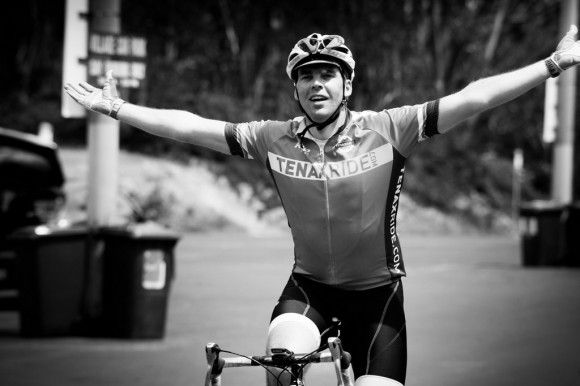 Thanks to our amazing team of volunteers for their tireless efforts in supporting the ride: Tam, Judy, Tony, Sharon and Ron. Thanks to Brian Beardon for taking on lanterne rouge duties and for staying with one of the injured riders for several hours while the ambulance was on its way.

Thanks to our fabulous series photographer Kirsten Simpson, whose amazing photos you can see throughout this post. Kirsten has kindly provided low-res versions of all 257(!) of the wonderful photos she took on Sunday, free of charge — just click here and use the password “MtBawBawBunch”. You can help support Kirsten’s work by purchasing high-res versions of any of the images in that gallery for just $7.95 each.

Kirsten has also helped us launch the Adam Gruer Annual Award for Excellence in the Field of Baw Baw Inspired Pain Facery, awarded to the rider who showed the best painface during Sunday’s ride. You can help choose the winner by heading here, entering the password “Pain!!” and clicking “Like” on the image that you like best. The rider in the photo with the most votes on Friday will win a Mt. Baw Baw Alpine Resort jersey.

And speaking of things you can win, CyclingExpress.com has provided us with a Bianchi Impulso road bike to give away at the end of the series. All you need to do to enter is do one or more of the 7 Peaks climbs with us. One climb gets you one entry, two climbs gets you two, and so on. If you climbed Baw Baw on Sunday and didn’t write your name down (see below for a link to the full list) then get in touch with proof of some kind (a Strava link or photo at the top) and we’ll make sure you’re listed.

The folks at CyclingExpress.com have also been good enough to provide a $50 voucher for one rider who put in an inspiring effort at Mt. Baw Baw. While there were arguably hundreds of inspiring efforts on Sunday — just getting to the top is a great achievement — we’d like to give the voucher to Ruth Oliver who, after giving birth to a little boy less than a year ago, spent a fair chunk of time off the bike before coming back and succesfully taking on what is arguably the hardest of the 7 Peaks. Well done Ruth! 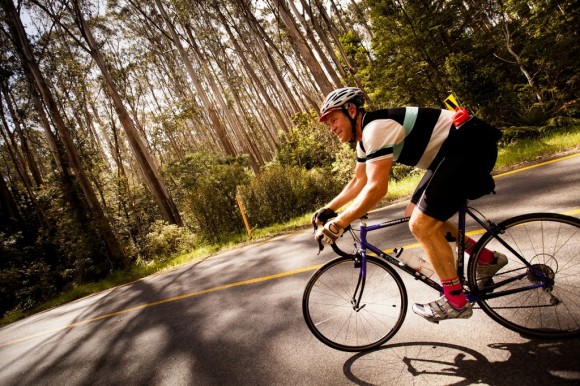 And finally, I’d like to leave you today with a message left on the Mt. Baw Baw ride Facebook event page by Hells 500 rider Evan Henley. It’s so great to read things like this, particularly given it fits perfectly with our Domestique charter:

Hey team – thought I would pass on some good feedback of today’s ride that a few of us received from a local back in Noojee today. He came over for a chat to let us know how impressed he was with the riding of everyone out on the road, being sensible and considerate, staying left and waving cars passed etc.

He thought it was fantastic, particularly given the tricky nature of many of the roads out that way. Well done everyone, great to get that feedback given how often many locals aren’t a fan of getting 200-odd riders on their roads!

Thanks very much for reading and we hope to see you up in the Victorian Alps between Christmas and New Years Eve when we tick off four of the 7 Peaks in three days!