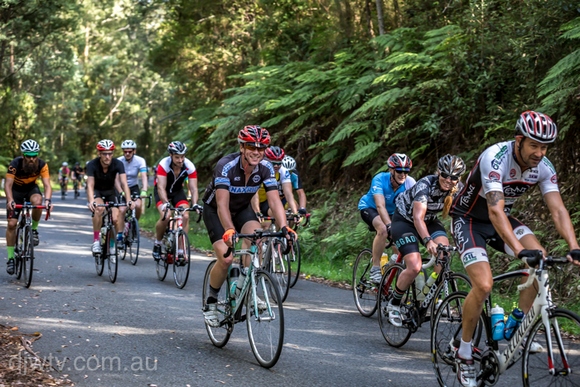 I can always tell how I’m going to fare on the Mt. Baw Baw ascent before I start the climb. If the easy, 6km section of climbing before the steep finale feels hard, I know I’m in for a tough slog. So when I reached The Gantry on Sunday morning and looked up at the imposing steep ramp in front of me, my legs already complaining, I wasn’t feeling particularly confident.

Memories came flooding back from an attempt at Baw Baw a few years ago. On that day I struggled through those easy 6km then blew up spectacularly once the steep stuff started (Update: I just found some footage from that attempt! It’s on YouTube now). On Sunday morning, I was genuinely worried about a repeat performance.

The day had started super-early with a 4:15am alarm and a pre-5am departure. The plan was to get to Noojee in time for a 7am roll-out with my Domestique co-conspirator Andy van Bergen, in order to be in Tanjil Bren at 9am. That would give us enough time to get everything set up before the crowds descended on ‘Tanjil’ for the start of our second Domestique 7 Peaks ride for the summer.

I’ve probably written this many times before but that ride from Noojee to Tanjil Bren is one of my favourite bits of road anywhere. The tough Vesper Hill climb opens up the legs and lungs nicely, and then you’ve got 20km of narrow blacktop that winds its way through remote and simply stunning temperate rainforest. The early alarm was a killer, but riding through that part of the world is always worth it.

We reached Tanjil Bren with plenty of time and got set up as the crowds arrived. The 7 Peaks series might be smaller this summer, but both rides we’ve done so far have attracted the biggest crowds we’ve had at Lake Mountain and now Mt. Baw Baw. On Sunday, roughly 300 people turned up to tackle one of Australia’s hardest climbs. 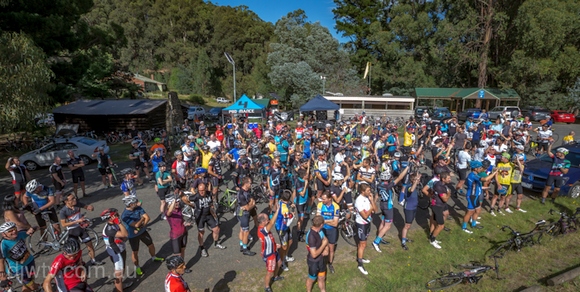 As normal, Andy and I set off towards the end, working our way through the crowd. Or in my case, passing barely anyone thanks to smashed legs from a very hard CyclingTips lunch ride the day before. I took it easy up the opening 6km of the climb but still reached the steep section feeling nervous about what was to come.

Even though I was expecting it, the steep ramp that followed was a rude shock to the legs. I tried to find something resembling a comfortable rhythm — no easy task when the gradient barely dips below 10% for more than 6km. But here’s the thing: it is actually possible to find a rhythm on Baw Baw. It might mean you’re grinding away at a cadence that’s much lower than you’re used to climbing at, but it’s still very much possible.

It’s just about settling in, getting your heartrate under control, and then plugging away for the next 45 minutes or so.

One thing that was particularly pleasing about Sunday’s ride was just how many people were attempting Baw Baw for the first time with us. Judging by the show of hands at the pre-ride briefing, I’d estimate somewhere in the vicinity of two-thirds. Four years into the Domestique series, that’s really heartening to see. The series was set up with the goal of getting people out riding in the hills for the first time. To see that we’re still achieving that is incredibly satisfying.

I rode the second half of the climb in close proximity to one first-timer, Joel, who seemed slightly undergeared with a 36×27 setup. He was battling cramps and was more than keen for the ascent to be over, but to his credit he kept going and got there in impressive fashion. It was Joel who delivered the day’s most memorable quote, with about 2km to the top: “I feel like throwing up,” said Joel. “Is that normal?”

I explained that wasn’t an uncommon feeling on the ol’ double-Baw but that, thankfully, the road was about to flatten off somewhat.

Getting to the Mt. Baw Baw resort is always satisfying, no matter how many times you’ve done the climb before. And seeing the happy faces of so many people who’d tackled and beat the mountain for the first time only added to the buzz.

Sadly, I didn’t get to spend much time at the top as word came through just after I arrived that a rider had crashed on the way down. The rider was OK — just a few stitches and a short hospital visit required — but he was incredibly lucky. It was yet another reminder that when a climb is as steep as Baw Baw is, the descent deserves extra respect.

Andy and I said it several times in our pre-ride briefing on the day, but it bears repeating here: if you’re going to climb Mt. Baw Baw, please, please take it easy on the descent. The surface is sketchy, the corners are tight and you can pay for it dearly if you lose concentration even for a second. Oh, and leave the carbon rims at home.

In spite of the crash, it was a thoroughly enjoyable day out on one of my favourite mountains. I’m glad so many people came along for the ride and, judging by the social media commentary in recent days, most people had a terrific time.

As ever, these events simply can’t happen without the support of a few key people. Thanks to John van Seters for another stint as “lanterne rouge” (last rider on the road) — John has been a supporter of Domestique since the start and for that we’re very grateful. And a massive thanks to Sharon and Nicole for taking care of everything at the pre-event village in Tanjil Bren. It’s hard to explain how valuable this support is. And thanks to Sharon and those that stepped in to help when the rider crashed.

And of course, a big thank you to our series sponsors. We always say that it takes a lot to run a free series and for that reason we’re incredible grateful for the support we receive from some great cycling brands and organisations. To Tourism North East, CycleCover, Pro4mance Sports Nutrition, Verge Sport (formerly Sommerville Sports), Bicycle Buyer/Swiss Eye, and Mt. Baw Baw Resort Management: thank you for believing in what we do and for helping us along the way. 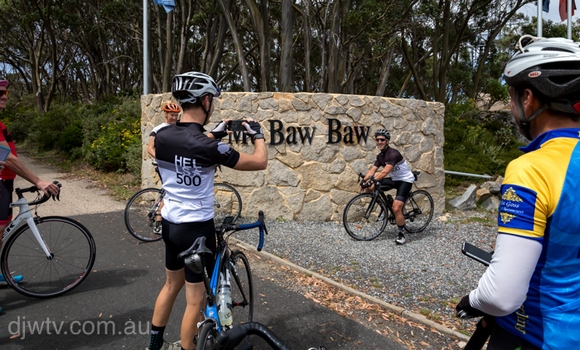 We’ve got just one 7 Peaks Domestique ride left this summer: Mt. Buller on Saturday March 5 at 10am. I’ll be making a weekend of it and I would encourage you to do the same. I can highly recommend the mountain biking at Buller; I wouldn’t recommend crashing while mountain biking, however.

Until next time, thanks very much for reading. For more photos from the ride, courtesy of Darryl Whittaker, head here. And be sure to check out the following video I put together. For the past few weeks I’ve been experimenting with doing more video and this latest effort is a bit of a video diary/vlog from Sunday’s ride. I hope you enjoy it!

Click through to see my Strava file from this ride.