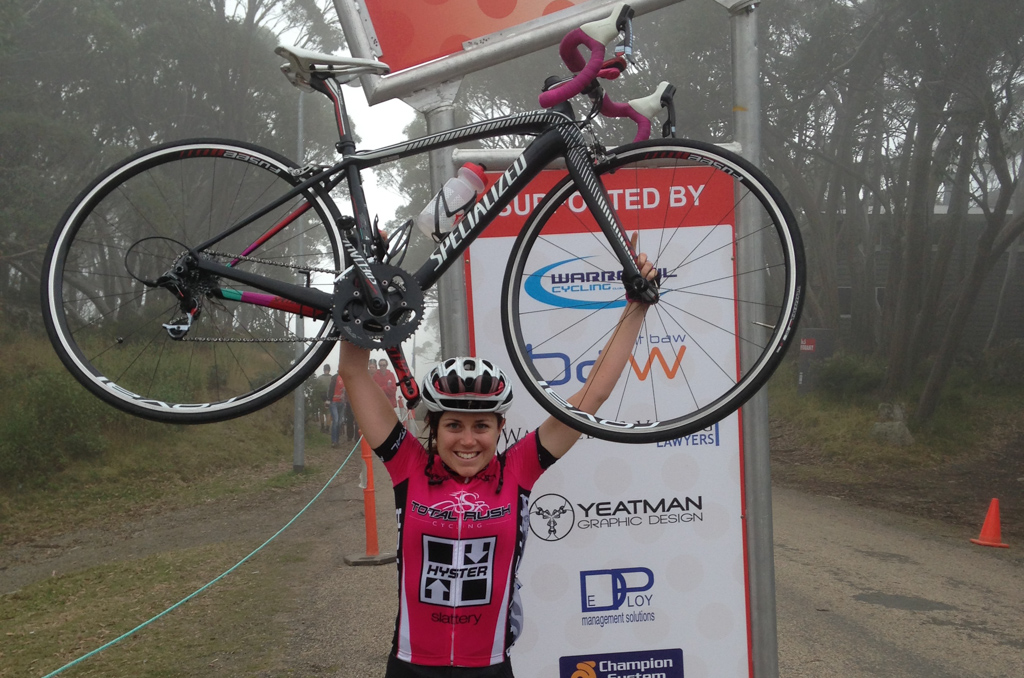 Ask most Victorian cyclists what the toughest climb in the state is and they’ll probably say Mt. Baw Baw. And fair enough: the climb’s final 6.8km rise at an average gradient of more than 10% and just getting up the climb is a great effort. Racing up it is something else entirely.

In this guest post, Verita Stewart takes us along for the ride in Women’s C-grade at Sunday’s Mt. Baw Baw Alpine Resort Classic, taking us through her preparation for the race and how it all unfolded on the day. Enjoy!

I’m relatively new to cycling and still finding my legs. But, after my recent win in C Grade at the Mt. Buller Road Race (the first race in the Victorian Road Series), I’ve reluctantly come to terms with the idea that I might actually enjoy climbing.

As I’m sure you are well aware climbing is bloody hard … but apparently I tick all the right boxes to make a good climber: the right physique, the right power-to-weight ratio, a high pain threshold (I think). So, I better make the most of my ability. I better take it and run (ride) … uphill.

I was relatively prepared leading up to the race. I had been working on a program of hills, hills and more hills so I was as prepared as I could have been. Well, actually, I don’t think anyone can really train properly for the Mt. Baw Baw climb itself, other than by riding it. A lot. Which I hadn’t. Ever.

I did go out to Mt. Macedon the week earlier to do hill repeats to try and simulate the Baw Baw climb. But I tell you now — it was not even close to a simulation. Mt. Macedon does have some very pinchy 13% sections, but it was nothing like the 20% sections of Baw Baw that I was about to endure.

Everyone was telling me that the course was suited to me: 103km of undulating hills, with a few pinchy sections, like Vesper Hill (4km at 8%), and the final 6km of Baw Baw where my power-to-weight ratio was going to come into play. But, 103 km was a daunting number for me. The longest race I’d ever ridden was the 50km Mt. Buller Road Race a few weeks earlier.

That race was hard. I struggled in the first 35km — the pace was fast and the wind was strong, I just made it to the base of the Mt Buller climb. So I was nervous that Baw Baw was going to be a similar race, that my hardest battle was going to be the 95km before the Mt. Baw Baw climb. I knew that I just had to get to the base and to do that, I would have to listen to my coach’s advice and “race smart”.

So I set my goals for this race: to hang in with the bunch, to stay out of the wind, and to preserve as much energy as I could so I could go into the second half of pain … I mean race … in the best physical condition possible. Despite all my hard work and mental preparation, I still sat on the start line, shaking in my proverbial S-Works “boots”. 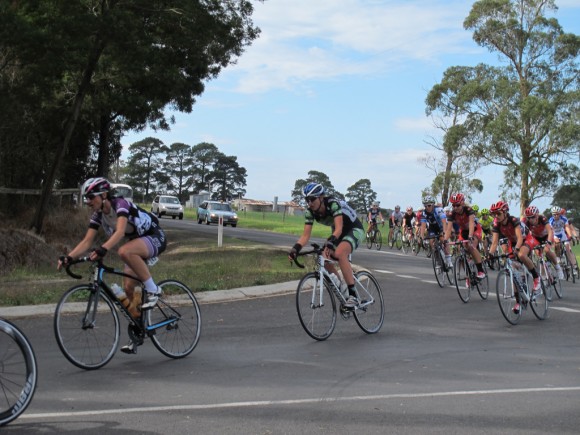 To my absolute horror A, B and C grades were sent off together. I assumed the grades would split up quickly, but that wasn’t the case at all. We rode together in a fairly (unexpectedly) civilised manner for the majority of the race, although a couple of the stronger riders went off the front early, taking a lead that could not be broken. I was consciously eating and drinking every 45 minutes to keep my energy levels up, which was going to be number-one priority if I was going to make it through to the end.

I was riding well, the pace was steady and I felt comfortable in the bunch. I tried to ride towards the front keeping Liz Hall (Total Rush-Hyster), Penny Brown (Total Rush-Hyster) and Hawthorn Cycling Club member Deborah Richards in sight. There were a few undulating sections at Buln Buln and Neerim South to keep us on our toes, but I managed to hang in there and before I knew it 50km had flashed by. Before too long we were approaching the feed zone at Noojee, which marked the half-way point of the race.

At this stage I was getting nervous about the approaching feed zone and not concentrating on much else. I was imagining the carnage that was about to happen, with everyone bottlenecking through a sea of soignuers waiting to do the ol’ water bottle swap. Among the “swannies”, I would have to spot mine — my friend Nadia — and grab my bottle off her … without dropping it, and without losing too much time on the bunch. Some three seconds later, I breathed a sigh of relief … phew! I had passed through the feed zone safe and sound, got my water bottle and re-joined the main bunch just before the dreaded climb that they call “Vespers”.

My legs were feeling surprisingly good as we started the climb, but I still wasn’t looking forward to the next 4km at an average of 8% — this was really going to test my climbing ability. Everyone had told me that Vespers was where the peloton would sort itself out. They were right. As soon as we hit the climb all hell broke loose — the stronger A-grade riders darted up like Bambi on red cordial and that was it. I lost the main bunch and was left spinning, alone. Crap!

In about 30 seconds, my plan of sitting in and staying out of the wind was gone. 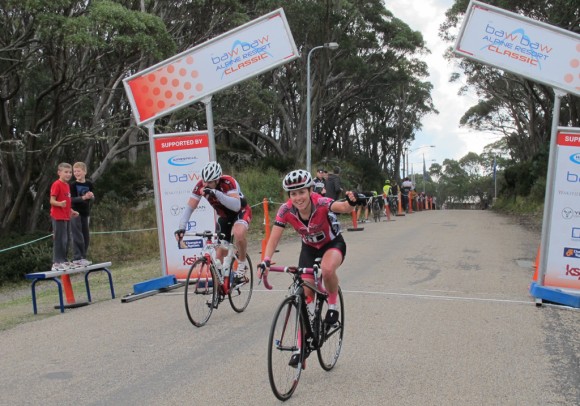 I was definitely not keen on riding solo, so I had a gel, sipped some water, and turned the legs on. I needed to catch someone, anyone, to ride with. So I climbed at a steady tempo and as I reached the top of Vespers and started the decent I could see a group of four riders in the distance. They were my bait, my carrot on a stick. I told myself I had to reach them; I needed some company. So I spent the next 10km chasing, ascending, descending and generally pedalling my heart out to catch them.

Finally, I caught up to them somewhere after Icy Creek. I breathed a sigh of relief when I realised it was Penny, Deb, (my mates from earlier), Sam De Rita (Holden Cycling Team) and Christal Wemyss (Horsham CC). I absolutely could not believe I caught them. Despite the fact my legs still felt good, I was a bit worried I might have wasted too much energy in the chase. I still had about 30km of climbing to go.

The five of us rode together, laughed together, cursed Baw Baw together, ran out of water, shared water and kept each other in good spirits for the next 20km of ascending and descending. Before I knew it we were at Tanjil Bren where we were about to begin the final climb, Mt. Baw Baw.

I blinked and Penny, Christal and Sam were off — they must have found something else in their tank and were powering off into the distance towards the Gantry at the base of the climb. 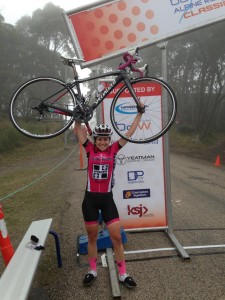 At this point Deb reminded me that we still had 6km of pain to go — my little legs needed to make it up Baw Baw, so this time, I was not chasing. We started the climb at the Gantry together.

For the 95km of the race leading up to Baw Baw I was in complete denial about how brutal the climb was going to be. And you know what? It was worse than I ever could have imagined. I was riding up a wall and it felt like it was impossible. But, somehow, I found my rhythm and started to grind away, one pedal in front of another, hauling my butt up that hill.

I found some satisfaction and motivation in passing some grown men, struggling, crying, cramping and even pushing their bikes during the awful climb. This was not going to be me. I kept my eyes to the ground and kept looking for the kilometer markers on the road, counting them down, slowly.

My brain was screaming at me to stop, so I got myself into a routine of going in and out of the saddle, zig-zagging and telling myself I was nearly there. My pain face was in full form as I heaved myself up that mountain. Every now and again I would look up to the sound of strangers and friends screaming my name out their car windows. Just the encouragement I needed but by the 3km-to-go point, I was beginning to fail – my brain was getting the better of me.

That was until I heard a beep — my Garmin had gone onto auto-pause. I laughed out loud, almost hysterically, at the fact that I was riding so slowly. That was the wake up call I needed. I had snoozed for long enough. I needed to focus — the lack of oxygen and my anaerobic state must have been turning me crazy. I was smiling!? I had to. It was what was going to get me through.

I forced myself to smile and to remember that riding my bike is fun. That’s why I love cycling, and that 13% gradient was fun. I was having a great time and I could pedal faster (to stop my Garmin from auto-pausing). So I told my brain to shut up, focused on the road ahead and smiled my way through those last few kilometres of Baw Baw. After losing the bunch at Vespers, and conquering Baw Baw, I rolled across that white line in a world of pain, with a huge smile on my face … and in first place!

The Baw Baw Classic is by far the hardest race I’ve done in my short cycling career and you know what? I still had fun. I feel that I rode the best race I could have — I hung in with the bunch, I stayed out of the wind and used my energy well. The second half of the race was hard, with the pinchy Vespers testing my limits. But I feel I also raced smart and that is what got me through the painful end. I’m very proud with the result.

The sick thing is that I’m sitting here recapping the race and I’m thinking Baw Baw was not that bad. I’ll do it again for sure, just not next weekend.

So … what’s next? No rest for the wicked, that’s what! I’ll be trying my hand at Cyclocross next weekend in Beechworth. Then on April 27 I’ll be tacking the next race in the Victorian Road Series — the Tour of the South West. Unlike Baw Baw the Tour of the South West is a much flatter series of races consisting of a crit, a time trial and a road race. I’ll be starting in the state series leader’s yellow jersey and hoping to hold onto it!

To any women out there who are thinking of taking up cycling, recreationally or competitively, just do it! Get a bike and ride it — it’ll change your life. Anyone for any women wanting to join a cycling club, I highly recommend the Women’s Development Program at Hawthorn Cycling Club.

Finally, I’d like to thank my wonderful support crew of Nadia, Gavin (Liz’s husband), the Total Rush Crew and the Hawthorn Cycling Club who all helped to get me through a tough day’s racing. And a big thank you to my coach Bec Domange for forcing me to ride up hills!

Click here to see Verita’s Strava file from the 2013 Baw Baw Classic. You can follow Verita on Twitter (@lowercasev) and on Instagram (@lowercasev there too) and read more about her cycling adventures at her great blog. All photos courtesy of Nadia Combe. Click here to see the full results from all grades in the race.