There are few hills in our fine state of Victoria that inspire fear quite like Mt. Baw Baw. It’s not a long climb, but what it lacks in length, it more than makes up for with ridiculous gradients.

Earlier in the week I’d half-jokingly suggested to the Donvale Demon that we attempt a climb of the great mountain. When he said he was keen, we made plans to head out there Sunday morning.

I picked the Demon up before 7am and drove us east, through Lilydale and out to Noojee. After a surprisingly quick drive, we had an even quicker bite to eat at the Noojee general store and then rolled out of town. I knew there were very few flat sections of road between Noojee and the start of the Baw Baw climb but the challenging Vespers Hill climb came up far quicker than expected.

It’s 4km of climbing at an average gradient of around 8% and a climb I should definitely add to the site. We both took it fairly easy on the steep climb, conserving energy for the always-tough Baw Baw ascent. After grinding our way to the top of Vespers, we flew down the other side and into a string of gorgeous rolling hills.

The photos featured here give you a sense of the region’s beauty, but I’d highly recommend getting out there for a spin if you can. Even if you’re not interested in climbing Mt. Baw Baw (there’s no shame in that!) the quiet, narrow, picturesque roads of the Baw Baw foothills are a sight to behold.

As we made our way through the towns of Icy Creek and Tanjil Bren, the Demon and I quipped about how it was hard to imagine a better location for cycling.

We rolled through Tanjil Bren and into the ~3km descent that takes you to Big Tree Creek and the start of the climb. We took it pretty easy in the climb’s initial 6km and, to be honest, those first 6km took it pretty easy on us. They’re some easy kilometres of climbing, particularly when you compare them with the horror they lead to.

For most of the morning, I’d been apprehensive about facing the final 7km of the Baw Baw climb. The last time I came out to climb the mountain I made it a few kilometres before having to turn around. I drove home that day feeling all kinds of despondent. Would it be the same this time around?

After the shortest of breaks at the start of the real climb, I joined the Demon in climbing the Baw Baw that we all know and love — a climb that starts with a gradient of 10%+ and that never really lets up.

As I put my head down and concentrated on finding a good rhythm, I realised I had a gear in reserve and that I was actually feeling pretty comfortable. ‘I’ll climb this whole thing without using my 28!’, I thought to myself in a moment of utter naivety. By the time I had reached the next corner, it was clear my plan was a little unrealistic.

In an attempt to strike a compromise between body and mind, I set myself the challenge of finishing the climb without stopping, and in less than 50 minutes. In my only previous attempt I’d summited the mountain in 58 minutes and I was confident of beating that quite comfortably.

While I barely used any gear beyond the 34 x 28 (I somehow did it with a 39×26 last time) I found myself going considerably faster than before. I distinctly remember that first ascent, weaving all over the road in an attempt to keep the pedals turning over, my speedo reading 6km/h all the while. This time around I was seeing 9km/h and 10km/h.

Sitting here at home a few days later, I’d like to say I always felt comfortable and in control on the climb. Truth is, I was caught in a perpetual battle with myself — sitting down was hurting my back and standing up had me feeling like my breakfast and I were about to be reacquainted. But I somehow managed to alternate between the two positions, keeping up a reasonable speed in the process.

When I reached the top, I hit the lap button on my Garmin and expected to see something in the high 40s. When 41 minutes appeared on the screen, my joy at summiting the great mountain was multiplied manyfold. I allowed myself a quick fist pump before coming to a stop in the carpark, my head resting on my handlebars. I’d taken 17 minutes off my previous best — an improvement of roughly 30%.

When the Demon reached the top we shared a high-five before heading to a nearby cafe to grab a bite to eat, something to drink and some photos of the great views.

Mt. Baw Baw is probably the only mountain I’ve ever climbed that isn’t fun to descend — it’s just too steep. Even though I was taking it pretty carefully around the descent’s many corners, I still found myself using every centimetre of the road on a couple of occasions. And that’s not to mention the potholes that litter the road.

After regrouping at The Gantry, the Demon and I continued into the more gradual descent toward Big Tree Creek. As I rounded a sweeping left-hander a kilometre or so later, I heard an almighty bang somewhere behind me. ‘Oh’, I thought, ‘I didn’t realise there was a gun range out this way.’

And then it hit me: that wasn’t a gun going off, it was a tyre exploding. 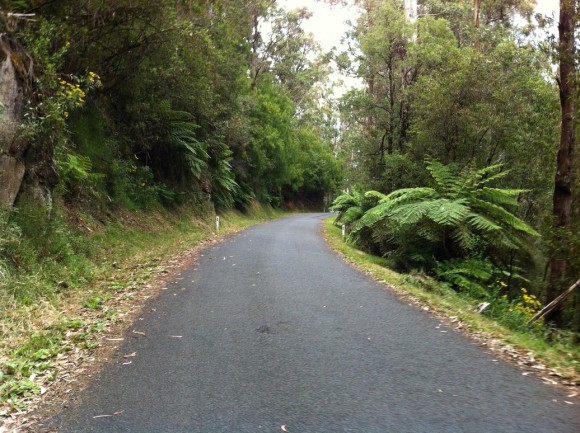 In that split-second, a day that had brought pleasure, pain, relief and exhiliration suddenly delivered a healthy dose of concern, adrenaline and horror. Was the Donvale Demon OK? Had he come off his bike? Was his bike OK? And was 3 Peaks now off the cards?

For the answers to these questions and more, read the Donvale Demon’s terrific first-hand account of the incident. You won’t be disappointed.