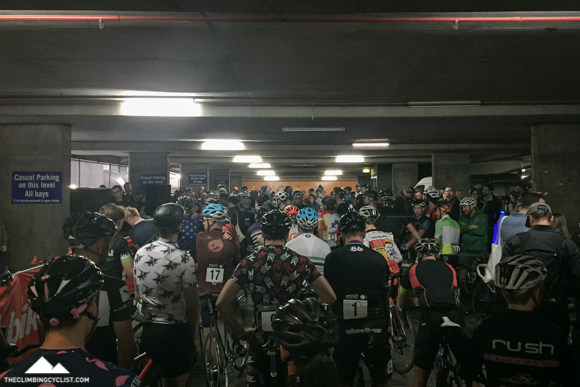 I’ve often thought it would be cool to ride around in a multi-story carpark, climbing the helix-like road to the top, then bombing quickly down again, railing the corners. But doing so in normal conditions would be far from safe, what with all the cars coming in and out.

But if you could close a carpark and do the ride in controlled conditions? Yeah, that would be cool.

Which is why I was excited to learn that Melbourne Cycling League and a bunch of local brands had managed to organise an event in Melbourne’s CBD in which riders would race each other from street level to the upper reaches of an 11-story carpark. By working with the owners of the carpark, Secure Parking, the organisers had managed to create an event whereby cyclists could take over the carpark for an evening.

It was an amazing atmosphere there on Flinders Lane in the west of the CBD: tunes pumping, a big crowd, a bar serving drinks, vendors serving food — it must have been quite the spectacle for passers-by. And inside the the carpark, the many spectators were being treated to some terrific battles.

Over the course of the evening, pairs of riders faced off on the 1.5km climb. Riders were paired according to category (male road, male fixed-gear, female road, female fixed-gear) with finals being contested by those who posted the best times in the heats.

I didn’t race it myself but I did get a chance to ride the course a couple of times before the event started. It wasn’t as difficult a climb as I was expecting. Rather than being a steep sustained climb, it was a case of sprinting up the ramps on each level (which rose at about 3-4%) then diving around the flat corners as fast as possible, before repeating the process some 20 times.

It was easily a big-ring climb and I didn’t change gears once throughout. I know many others also stuck to a single gear.

I put together a video from the evening which you can see below. It shows some of the racing action and then footage of the entire climb, at double-speed, as shot from my handlebars.

Thanks to Melbourne Cycling League, VTWO, Secure Parking and everyone else that made the event happen. It was a very enjoyable Saturday evening and I hope it’s just the first of many such events here in Melbourne.

3 Replies to “Video: Bike racing in a multi-story carpark”