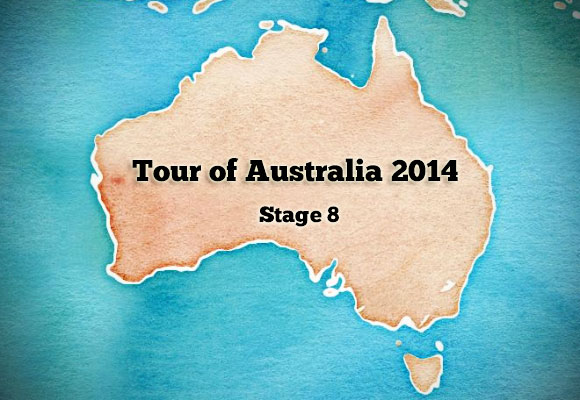 Inspired by the Giro d’Italia, the Tour de France and the Vuelta a Espana, the Tour of Australia is a fictional three-week Grand Tour route created by David Blom and Matt de Neef to showcase some of Australia’s best cycling roads. This is the second year of the race and today we reveal stage 8 of the 2014 edition.

Click here to see the map and profile at Ride with GPS.

Stage 8 of the 2014 Tour of Australia takes the riders from Cootamundra to Tumbarumba at the foot of the Snowy Mountains. It’s one of the shorter stages of the race at 160km, but there’s enough climbing to make this stage a challenging one.

The first 60km of the stage are largely uneventful, with a mostly flat parcours in store for the riders as they head south on Gundagai Road and then on Gundagai-Burra Road. As the race passes through Gundagai after 60km there’s an intermediate sprint for the riders to contest, and as they head south out of town on Gocup Road, they’ll get their first taste of climbing for the day.

The climbing starts a few kilometres out of Gundagai and while there is a little bit of ascending over the next 10km, the few steeper ramps aren’t long enough to justify a categorised climb.

The second and final intermediate sprint point comes on the outskirts of Tumut after 92.5km and roughly 10km later, on Batlow-Tumut Road, the day’s proper climbing begins.

The first categorised climb is a fourth category ascent that peaks at 108km after 2km at about 6%. After a short descent it’s into a third category climb — 6km at 5% — which tops out after 116km. The third and final categorised climb of the day starts in the small town of Batlow, climbing at 4% for 3km and peaking 125km into the stage.

While there are no further categorised climbs for the day, there’s still a little more climbing for the riders to contend with and it’s after 140km that the stage reaches its highest point of 1,073m (compared with the 334m of the stage start).

It’s a largely downhill run for the final 20km to the finish in Tumbarumba, including a couple of sections of sustained descending.

Where stage 7 was one for the fast men of the peloton, stage 8 is likely to favour the riders of the breakaway. Expect a large group to get away early in the stage and for the group to splinter on the climbs, perhaps with a smaller group of riders getting away to contest the win.

Then again, the climbs aren’t long or steep enough to shell all of the fast-finishers in the race, so if a rider like Peter Sagan or Michael Matthews fancied his chances on this stage, you might see the peloton a little less willing to give the break much time.

In reality this is a stage that could go any number of ways. One thing’s for sure — with some very tough stages just around the corner, the GC riders and pure climbers will be looking to keep as much in reserve as possible.