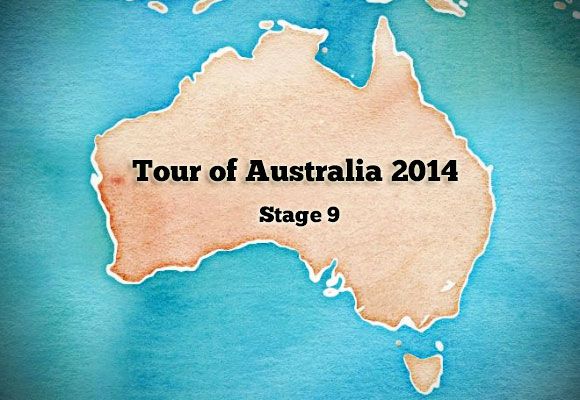 Inspired by the Giro d’Italia, the Tour de France and the Vuelta a Espana, the Tour of Australia is a fictional three-week Grand Tour route created by David Blom and Matt de Neef to showcase some of Australia’s best cycling roads. This is the second year of the race and today we reveal stage 9 of the 2014 edition.

Click here to see the map and course on Ride with GPS.

As far as Grand Tour stages go, this would be up there with the most challenging we’ve ever seen. Nearly 80km of climbing for an elevation gain in excess of 6,000m, including three separate climbs of more than 15km. In short: it’s a thoroughly brutal stage of racing.

It’s roughly 8km from the start in Tumbarumba that the road starts climbing for the first time, the riders gaining altitude in a series of descent-separated ramps. And then, after 16km, the first and longest of the day’s seven(!) categorised climbs begins. The category one climb takes the riders up the Elliot Way, climbing at an average of 3.3% for about 17km to the summit after 34km.

From the top of that climb it’s down the other side of the Elliot Way and on to Goat Ridge Road where the riders descend past the outskirts of Talbingo Reservoir before heading into the second climb of the day after 53km.

This first category climb averages 7% over its 12.4km and peaks after 66km, just outside Cabramurra. It’s then into seven kilometres of descending, around the western outskirts of the Tumut Pond Reservoir, before the third of the day’s climbs begins.

This particular second category ascent, as the riders follow Tooma Road south, is 6km at 7% and leaves the riders at more than 1,600m of altitude after 78km of racing.

Much of the next 50km is downhill as the riders head south west towards the Victorian border, via the small town of Jagumba and the Tooma Reservoir. There is a small fourth category climb for the riders to contend with after 108km (3km at 4%) but aside from that it’s largely downhill to the town of Khancoban where the day’s only intermediate sprint will be contested.

From Khancoban it’s less than 80km to the finish, but that includes three significant climbs. The first of those, a first category ascent along the Alpine Way, starts just 1km out of Khancoban and rises at 4.5% for most of 15km.

Heading south from the top of that fifth of seven climbs the riders descend before the penultimate climb begins after 159km. It’s 6km at 5% for that third category climb and the descent off the other side takes the riders to the 177km mark. It’s here that the Alpine Way turns east and the final climb of the day begins.

In all it’s nearly 18km at 6% to the top of the hors categorie climb at Dead Horse Gap and from there it’s less than 10km, largely downhill to the finish in Thredbo.

You have to feel sorry for the sprinters and the heavier riders on a day like this. The road heads up almost straight away, and the entire stage will be about simply trying to get through inside the time cut.

This is the sort of stage where you might expect a group to get up the road quite early on and for them to build a considerable lead quite quickly. Assuming there are no threats to the general classification in that group, the big names might be content to let them go and contest the win.

It’s the sort of day that, although it’s quite early in the race, could have quite an outcome on the overall standings. If a big name rider has a bad day in the hills, they could lose a whole stack of time against their rivals.

Either way, there would almost certainly be a whole host of attacks on the final climb in an attempt to create time gaps. But for the riders that do get dropped on that last climb, the final descent (while not terribly steep) might allow some time to be made up.

In all, this is a stage that could go any number of ways, depending on the mood in the peloton, the ambitions of the GC riders, and the make-up of the breakaway that would be sure to form quite early on.