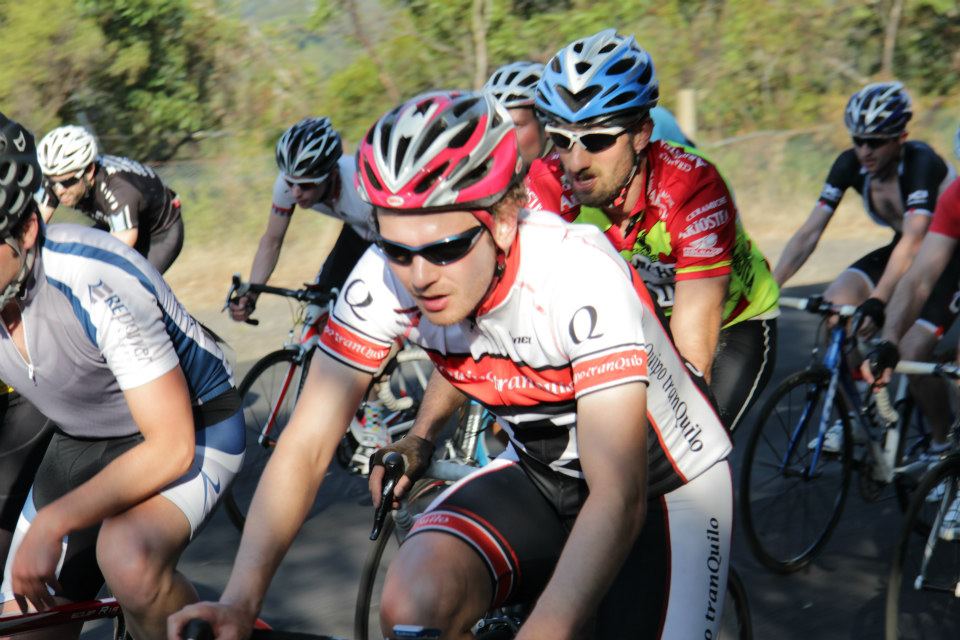 One of the many things that stands out to me about Tim Krabbé’s classic novel The Rider is the way he weaves stories from previous races into the novel’s main narrative. I’d like to imagine that Krabbé has notebooks full of scribble about the many hundreds of races he’s done throughout his career.

And while I’m not saying I’ll ever be as good a writer as Krabbé, and while my racing career is decidedly shorter (I’ve done two races) and less distinguished (I’ve got one 3rd place) than his, I do like the idea of penning something short about each of my race efforts. Even if I’m the only one that reads them.

The first time I pinned on a number was in April last year when I rode E grade in the first Northern Combine race of the series. It went well, I enjoyed it and I swore I’d be back. It took me 10 months to enter another race.

A few weeks ago I finally got around to buying a racing license and when Fletch said he and fellow eQuipo tranQuilo rider Marcus Nyeholt were going to give the Hawthorn Cycling Club criterium a go, I had no real excuse. Particularly given I was between jobs at the time.

I rocked up far too early and after a bunch of warm-up laps, and after meeting with Fletch and Marcus and signing up, it was showtime. The marshall ran through a bunch of rules and precautions and before I knew it — and before I was ready — he yelled ‘off you go!’.

I’d been nervous all afternoon — it was my first crit and I didn’t want to make a fool of myself. But as soon as the racing started (after 1.5 neutral laps) that nervous energy was gone and I was simply focused on trying to hold the wheel in front of me.

It’s an interesting course, the old ‘Teardrop’. It’s roughly 1km around and less than half of that is flat. From the start/finish line there’s a long descent around a sweeping left-hand bend after which the road flattens off, climbs a little, then flattens off again. Then you approach a very tight left-hand bend (a neutral zone) after which it’s full gas up the hill to the finish. That climb to the line is probably more suited to my abilities than the pancake-flat course at St. Kilda, for example.

I’d ridden the Teardrop on my own a bunch of times in the past and even had a tilt at pushing as hard as I could. But racing in a bunch is something else entirely.

A few riders jumped early and I found myself involved in just about every attempt to chase them down. I’m not sure if I was just feeling twitchy or if I thought one of the moves would stick or if I was just riding like a rank amateur, but every time there was a jump from the bunch, I felt compelled to follow. But it seemed to work. No-one really got away and we managed to keep things bunched up nicely.

And while I was keen to jump across to anyone that attacked, I didn’t when Marcus launched off the front about a third of the way into the race. But, as with all the other attempted breakaways in the race, his didn’t last all that long before it was reeled back in.

Predicatably, the race got harder as we went along. In the opening laps I felt like I was dancing up the short climb, comfortably near the front of the bunch. But with every lap it felt that little bit harder. And that climb, combined with the chasing down of attacks, only caused the fatigue levels to build. 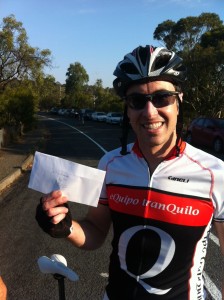 But the pace wasn’t relentless. There were two spots on the course were the pace seemed to ease off every lap: at the bottom of the descent on the back straight, and into the neutral zone just before the climb. Those short bits of respite were a godsend.

And then there was the fact we were racing at the same time as B grade. More than a few times they raced up behind us and the marshalls in our race would tell us all to sit up and let B grade pass. It makes sense — it wouldn’t be fair if a handful of D-graders leapt onto the back of the B-grade field — but it did mean that everyone got a rest and that any potential moves were quashed.

I reckon I spent most of the race somewhere in the top 5 positions, though rarely on the front. But when it came to crunch time, with one lap to go, I managed to find myself out of position. I must have soft-pedalled for only 3 seconds after the descent and before I knew it I was being overtaken on both sides.

I’d heard that it’s vital to get a good position coming into that final corner but I was too far back to be any danger. I gave it everything I had up the climb and crossed the line in 9th.

The good news was that Fletch had gotten himself into a good position for the last corner and came over the top in 4th place (and very nearly 3rd).

I’ve only done one crit but I think I can say with some certainty that it’s a totally different type of riding compared with, say, a training ride with mates or even a mountain climb. The crits are short and fast with almost no time to think, and yet there’s so much strategy to consider.

I felt like I learned a lot about crit racing just from that one experience and I suspect that with a few more visits to the Teardrop, I might get a better idea of what’s needed to win a race like that.

Either way, I had a lot of fun on Wednesday and I’m sure I’ll be back to do it all again. Maybe this time it won’t take me 10 months.

Thanks to Dave Williams and the Hawthorn Cycling Club for the images you see above. To see all the images in this set — which includes all races from the night — click here.