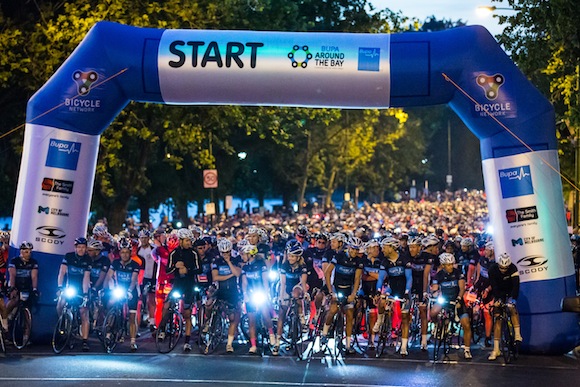 In the past five years I’ve completed three editions of Bicycle Network’s Around the Bay in a Day but with a prior engagement in Perth on Sunday, I had to postpone my fourth attempt. Instead, my brother Brendan de Neef went along and put together this report from the day.

The last time I rode Around the Bay was back in 2009. My brother Matt and I had done back-to-back 210km rides, in a clockwise direction. We had trained solidly through the winter, working up to the big day, with the intention of just finishing it. This time around was quite different.

With Matt over in Perth for the weekend I stepped in to fill his shoes. I approached the day with optimism, hoping to average over 30km/h, and not completely ruin myself. I had been doing training rides with my girlfriend Anneka and her work colleagues who were all working towards the 210km Sorrento return, so by the time Sunday came around, I was well and truly sick of Beach Road.

Myself, Matt ‘Fletch’ Fletcher, Sean Sampson and Andy van Bergen had arranged to meet at 5:30am at the start line but unfortunately, due to a back injury, Andy was unable to join us.

The much-talked-about plan was to cruise down to Geelong on the back of a super-strong tailwind-backed group, arriving well-fed, watered and rested, but as we settled into a rhythm on the Geelong Road through Altona, it became increasingly evident that we would be setting the pace.

With a full contingent of passengers, we set about tapping out a wind-assisted 40km/h as we navigated the strange array of detours off the freeway. Once back on the freeway the emergency stopping lane soon became too narrow for the large groups of riders rolling through.

As we started catching bunches of the 250km riders, it was inevitable that there were some spilling out onto the live freeway lanes. Fortunately the drivers out on this Sunday morning were all good natured.

For those that haven’t ridden the Geelong Road before it’s about as boring and uneventful a road as you can get. We were cruising at 40km/h, sometimes more, just watching the kilometres tick over, planning our approach for the rest of the ride and talking about how horrid the headwind would be on the way back (it was).

I had arranged the previous day to meet my Grandmother on a corner in Corio at 8am. We rolled off the Geelong Road just before 8am and rendezvoused at a tardy 8:03am where we were loaded up with chocolate bars and water (Thanks Oma!). The chocolate and water went down a treat and I was left marvelling at my precise ETA.

For a few minutes after stopping, we ramped up the speed, after I had put the thought into Fletch’s head that we could make the 9am ferry at Queenscliff. After a few minutes of fast-paced mayhem through the streets of Geelong we settled it down, resigning ourselves to the next ferry. The next 25km went at a decent pace, as we worked with a strong bunch of guys towards Queenscliff, one with a magnificent looking (and sounding) Baum. 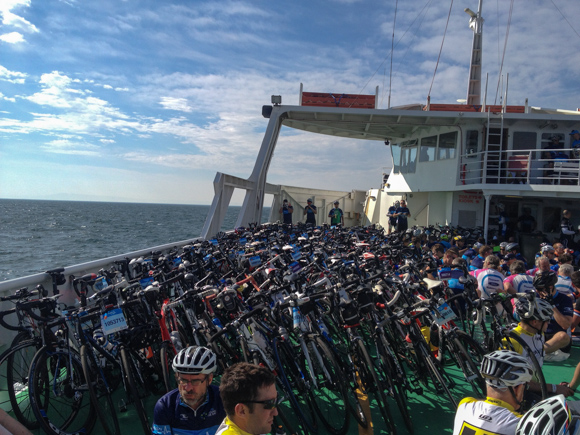 With close to 100km completed and only one brief stop my legs were starting to feel a little heavy, but with lunch just a few minutes away, we pushed on. At some point along the Bellarine Hwy we lost Sean. Thinking he was just behind us we powered on, through to Queenscliff and were ushered immediately onto the 9:30am ferry, lunch in hand, but without Sean.

As it turns out, Sean had had severe back spasms and had to drop out after catching the ferry to Sorrento, but great effort from him for sticking it out through the pain.

After guzzling lunch and rescuing our bikes from the precarious stack of carbon fibre we disembarked and had a chance encounter with my girlfriend Anneka and the Cockram Construction crew, who just arrived from the clockwise direction just as we were getting ready to leave. They had opted for a slightly later start and had taken a scenic detour through Mt. Martha, a very nice addition.

As Fletch and I rolled out we almost immediately latched on to an excellent group led by some guys in John West kit. We were joined by a few more in Energy Australia kit and did some rolling turns, breaking the ever-increasing headwind. We managed to stay together as a group for roughly 35km, coasting through Rye, Rosebud and Dromana sitting on about 35 – 40km/h through to the Mt. Martha area, where the road started to get a little lumpy and riders started dropping off.

It was so great to have a group that wanted to work together to make the ride more enjoyable, after being so disappointed with the groups on the way down to Queenscliff. Big shout out to those John West guys for getting the rabble organised.

It was around this time that it was starting to heat up, with the Garmin reading 37 degrees (clearly it wasn’t) and the headwind was also getting stronger. Fletch and I found us a new companion as we were coming into Mornington; some guy in a pale yellow Rapha kit riding an S-Works something-or-rather. We shared the load, although with just three of us it became increasingly difficult as the headwind grew stronger. 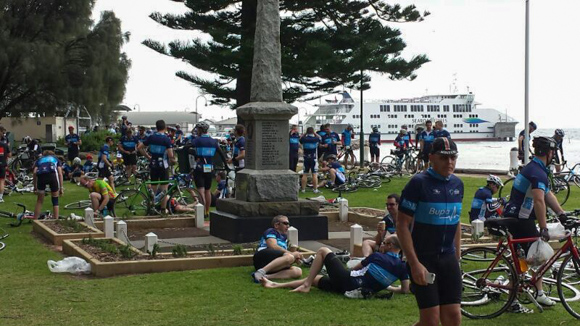 As we left Frankston the sufferfest began and continued through to Mordialloc as the wind blew directly down the wind tunnel created by the Nepean Hwy. Full credit to Fletch for putting himself out in front for a heroic number of turns, as we battled through to Mordialloc at around 28km/h. Feeling slightly weary we stopped at Mordialloc and refuelled, collected our thoughts and prepared ourselves for the last 30km into the wind.

Both of us had dug quite deep to keep the pace up and the heat was starting to take its toll on me. With the end in sight we set out for the final run to the finish. Luckily that section of Beach Road is more sheltered than the last and we were able to maintain a consistent speed most of the way back.

It was at roughly this point that I was very happy I wasn’t doing the clockwise direction. Battling back through the western suburbs with a headwind and the West Gate climb looming was far less appealing then a Beach Road finish. As we entered the last 5km I slammed down the most delicious gel I have ever had and powered on to the finish line.

We crossed the line with a very pleasing time just shy of 7 hours ride time and a 30km/h+ average. It was a big and rewarding day on the bike and having that 210km benchmark has really shown me how much I have developed as a rider over the last couple of years.

Kudos to Fletch for suffering through the whole thing with me and doing some monstrous turns at the front and also to Sean for smashing out the first half in style. A big thank you goes out to Emma Bolger and the team at Bicycle Network for having me and congratulations for putting on another excellent event.

Click here to see Brendan’s Strava file from the ride, including his ride to and from the start/finish.