Riding 160km in a day is an impressive effort. Riding an average of 160km a day for two weeks is a whole ‘nother level of impressive. That’s exactly what Sean Sampson plans to do when he sets off from Brisbane on Saturday morning and rides south. His plan: ride from Brisbane to Melbourne in two weeks to raise money for charity. In this guest post Sean describes the evolution of the Brisane2Melbourne idea and how there’s much more to a ride of this magnitude than just rolling up at the start line.

When you sit down with a map and actually plan how you’ll ride a bicycle from Brisbane to Melbourne via Sydney, it suddenly dawns on you: it’s a bloody long way. And of course there’s the small matter of getting over the Great Dividing Range.

When I first mentioned my grand plan to my wife, she laughed. In fact, I’m certain she’s still laughing now but after 12 months she’s learned to hide it. You see, I’m anything but your stereotypical cyclist.

I’m 6 foot 3, on the wrong side of 100kg and, while we’re all being honest, only took up cycling as I loathed the boredom of sitting in traffic to and from the office. That’s three fairly significant hurdles in the way of a 2,000+km along Australia’s east coast.

Such obstacles prompted many to ask me the same question: why?! 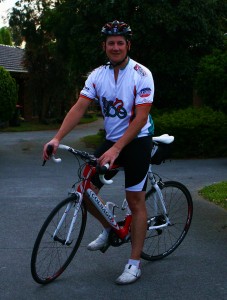 Why indeed. It started off with the idea of cycling home from Sydney after Christmas, just for something different. My wife is to blame for it spiralling from there — she suggested I do it for charity.

I thought about it, and concluded that 1,000km is hardly worthwhile. I decided to ride from Brisbane instead — that would be interesting enough to get some attention. And just like that, Brisbane 2 Melbourne was born.

Choosing the charities I wanted to support was equally easy. I’d had a long association with Foundation 5 Million+ from when I was living in Sydney, and I’d become involved with Cottage by the Sea through work when I moved to Melbourne.

F5m+ was started by a guy called Ian Ballard who had the dream of raising $5 million for research into a cure for MS. Sadly, Ian lost his battle before the $5 million was raised, but his legacy continues and F5m+ is now chasing their second $5 million.

Cottage by the Sea are a much smaller outfit. They’re based in Queenscliff and they provide short-term relief care for children whose families are experiencing difficulties. While parents deal with their difficulties, the children are cared for and get to experience camping and surfing in a safe environment.

I love the ocean so I wanted to keep the water nearby as much as possible throughout the ride. It will give me that psychological nudge to keep pushing when those mental and physical walls come up.

Starting in Brisbane’s Grey Street, I’ll wind my way through to the Gold Coast and start tracking along the coastline. Passing through towns such as Byron Bay, Coffs Harbour and Port Macquarie, it won’t be difficult to stay motivated.

It’s certainly not a race to get to Melbourne, so if any particular day does get too tough, I won’t think twice about putting the bike down, throwing the swimmers on and taking a dip.

I’ve set myself a target speed of 25km/h. Granted, there’ll be periods where I’ll comfortably cruise along quicker, but the ride is about generating awareness so I’ll be making stops in many of the towns I pass through, be it for a drink or a meal.

Having grown up in Sydney, I have a soft-spot for the NSW coast, both north and south. This was a big reason for choosing to stay coastal as opposed to heading inland. There are so many amazing sights to take in — I’d be foolish to simply rush past them chasing a Strava segment.

Training for two weeks of constant riding is something I never thought I’d need to think about. I spoke to coaches, to riders, to clubs, to dieticians, to anyone I thought could have any useful information to help me survive intact.

Cyclesmart were great in assisting with the jerseys, but I struck out securing any sponsorship elsewhere. My wallet took a beating as I churned through countless kilometres and my wife showed the patience of a saint while watching me do hours of internet research, trying to educate myself on endurance riding. 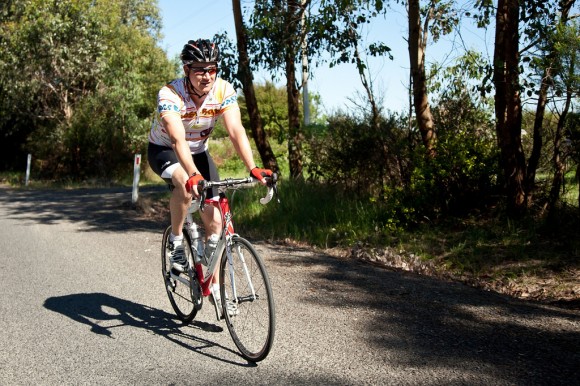 Two years ago I had never even taken part in a group ride. When I finished the 100km Sorrento to Melbourne version of the 2010 Around the Bay in a Day, I nearly cried crossing the line – it was the longest ride I had ever completed. Now, 100km has become a near minimum for any weekend ride.

Granted, the pace isn’t always that quick, but I wasn’t training to go fast, just to go. My training rides often incorporate the Emerald Bakery, Mt Eliza’s Café on the Mount and a piece of cherry slice at Sky High Mt. Dandenong — a man needs his incentives!

Saturday March 10 will no doubt be the start of a fortnight that will make me cry, make me laugh and make me need to dig deeper than ever before. There’s no prize at the end other than a cold beer and the feeling of accomplishment. But then again, that’s all cycling is really about. Journalist Scott Martin sums it up pretty well:

To be a cyclist is to be a student of pain … at cycling’s core lies pain, hard and bitter as the pit inside a juicy peach. It doesn’t matter if you’re sprinting for an Olympic medal, a town sign, a trailhead, or the rest stop with the homemade brownies. If you never confront pain, you’re missing the essence of the sport. Without pain, there’s no adversity. Without adversity, no challenge. Without challenge, no improvement. No improvement, no sense of accomplishment and no deep-down joy. Might as well be playing Tiddly-Winks.

You can follow my ride at www.Brisbane2Melbourne.com or on Twitter @Bris2Mel. The ride is open to anyone who would like to join me, if even for part of one day.  Just get in touch and we can work out a spot to meet. It will be great to have some company out on the road.

Have you got a cycling adventure you’d like to share? Get in touch with Matt via email.