Every time I’ve stepped into the second bedroom of my shoebox apartment in the past few weeks, I’ve been struck by a small pang of disappointment. My bike is just sitting there, leaning casually against the wall as if to say ‘well, are we heading out now?’

It’s been nearly three weeks since I finished the 3 Peaks Challenge and the closest I’ve been to getting on the bike are those wistful glances at the ol’ Cannondale of an evening. 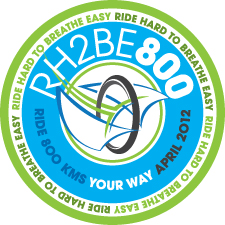 I’ve been off the bike at the behest of my physio who suggested at least three weeks of rest in order to let my troublesome ITB(s) heal. It would seem I gave them a fair old work-out in the lead up to and completion of the 3 Peaks Challenge.

It’s driven me a little bit crazy to be honest. I can almost feel my quads and calves melting away as every day passes, and I’ve actually lost weight since 3 Peaks — a sure-fire sign of muscle loss.

But as of this weekend, the drought will be over. The physio’s given me the all-clear to start riding again. Sure, my ITBs still give me the occasional biting pain as I stand up from a seated position, when I crouch down or roll over awkwardly in bed. But, as the physio said, I could take eight weeks off the bike and there’s no guarantee they’d be any better.

So, this weekend, I’ll be getting back on the bike, and not just for a single ride. This Sunday marks the start of April and with it the beginning of the Ride Hard to Breathe Easy challenge on Strava.

At first glance the challenge is a simple one: ride 800km in April. Dig a little deeper and you’ll see there’s a lot more to the story.

In February 2010, Victorian cyclist Karen Munroe rode nearly 800km from Adelaide to Melbourne to raise awareness about lung cancer. Karen had been diagnosed with the disease a year earlier, despite having never smoked in her life.

And you can play your part. It’s completely free to compete in the challenge and all you need is a smartphone and Strava app, or a Garmin unit to track your kilometres. Upload your rides to Strava and your progress in the challenge will be calculated automatically.

There are even some great prizes on offer, including:

There’s no obligation to raise money during the challenge — it’s all about generating awareness. Of course, if you or your friends and family are interested in donating to lung cancer research, you could head over to the Australian Lung Foundation and show your support.

Whenever I’m struggling on the bike if often helps to think of how the pain of cycling is completely self-inflicted. So many people out there have pain and suffering forced upon them, with no way to pull over to the side of the road and take a breather.

This April I’ll be pushing myself to complete the 800km and to raise awareness about the great work being done by Ride Hard to Breathe Easy. I’m hoping I haven’t lost too much of my fitness in the last three weeks of inaction but if I have, it will make the challenge that much more satisfying.

I’ll be blogging about my progress and posting updates to Facebook and Twitter. I look forward to hearing your Ride Hard to Breathe Easy stories as well.

And if you haven’t signed up already, what are you waiting for?