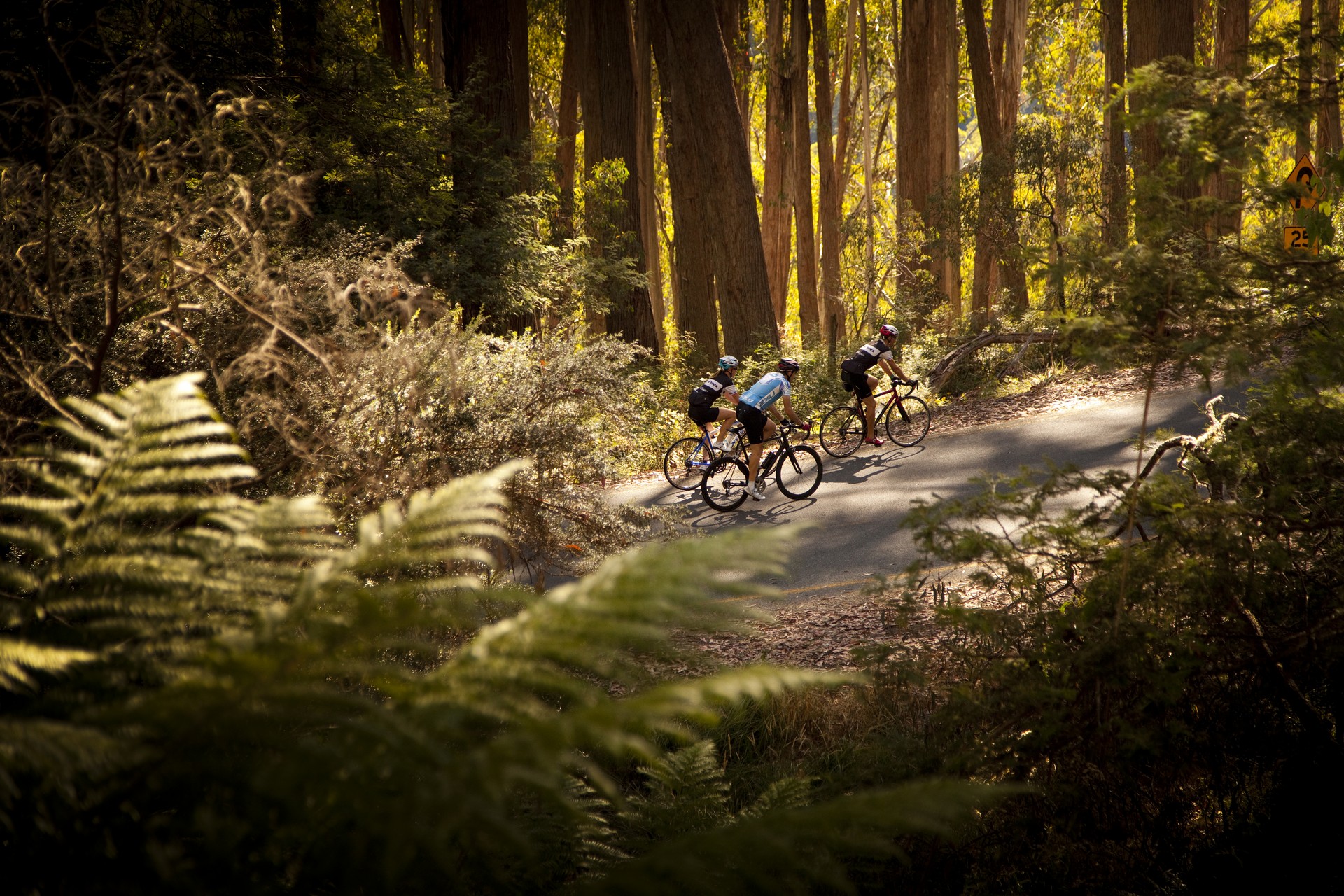 One of the things I enjoy most about cycling is the social interaction that happens while on and off the bike. The pre-ride banter, the mid-ride chats, the post-ride debrief; they’re all a fundamental part of what I look forward to and love about the sport.

By extension, one of the most satisfying things about the 7 Peaks Domestique Series has been the way we’ve been able to bring cyclists from all different backgrounds together, to ride and to socialise. And nowhere has this social aspect been stronger than on our two trips to Mt. Buller — one in mid December and one just last weekend.

As with our earlier trip to Mt. Buller a handful of us were lucky enough to stay at the Neringa Ski Lodge in the Mt. Buller village last weekend. With a great communal living area the 22 of us had a great space to enjoy lazy breakfasts, late nights spent talking over drinks and more.

But as well as all the socialising, we also managed to get in a couple of bike rides.

The weather had been fine at Mt. Buller since we arrived on Friday evening but no sooner had we started to kit up for the Saturday 4pm ride than the weather started to change. Dark clouds started to roll up the mountain and it looked as if we might be in for a repeat of the horrendous weather that had defined our first trip to Buller.

But despite a few specks of rain as we started the descent, the rain seemed to blow past us and by the time we reached the tollbooth at Mirimbah, the roads were dry and the sky was clear.

As we waited for 4pm to roll around, more and more riders joined us at the tollbooth. We’d expected around 50 to turn up for the first of our two sessions — not nearly as big as the 160+ that we’d had at Lake Mountain in January but still a great turn-out given many were only up at Buller for the day.

Andy and I gave a quick pre-ride briefing and then it was straight into the climb. Two of our 7 Peaks regulars (and Neringa lodge-mates) Nigel Welch and Rohan Wills had kindly volunteered to pick up the back of the field which left Andy and I free to work our way from group to group. Only problem was, I could barely keep up with Andy.

I don’t know if it was the hot, dry ride I’d done with Nigel and Rohan the day before or the midnight climb of Mt. Buller I’d done early that morning with my brother Brendan, but either way, I found myself feeling weak and slow.

While Andy chatted away, riding easily from group to group, it was a real struggle just to stay with him. But he was good enough to slow down for me and together we made our way through the field, having a quick chat to other riders as we went.

About halfway up the mountain we came across Andrew Moodie and Michelle Mumford, another two riders that were staying with us at Neringa. The four of us rode close to one another, sometimes with Andy and Andrew just off the front, other times with the four of us together. It was great riding with the three of them — having some company certainly makes a difference when you’re struggling.

In the following half-hour or so the rest of the group made its way to the village, finishing with Nigel, Rohan and the final rider on the road, Katrina. A bunch of us spent a little while talking at the top and then it was back to the lodge to get freshened up before heading out for dinner.

While Saturday morning had started with a nice sleep-in and leisurely breakfast (at least for those of us not doing early-morning repeats!), Sunday morning was a different story. There were a few sore heads in the lodge and getting ready for the 8.15am departure from the village was a bit of a struggle for some.

It was cool enough on the descent for some of us to err on the side of arm and leg warmers (and a jacket), but by the time we got to the bottom the weather was truly glorious. We welcomed a group of around 45 — noting many familiar faces from the previous day’s ride — and set off up the mountain. Andy needed to head back to Melbourne soon after the ride began so it was my turn to take up lanterne rouge duties.

I waited at the bottom for a few minutes for the slower riders to get some way up the hill before eventually rolling out at a gentle pace. It took me the best part of 2km to catch up to Mick Beasley who was tapping away at the back of the field. As Mick and I started chatting away, I decided I would do the rest of the climb in the big ring — might as well get some strength training in, right?

Mick and I chatted for several kilometres and as we climbed higher, we started to see a couple riders a few corners ahead of us on the road. It didn’t take long for Mick to find a bit more power and bridge across to the riders, Les Voros and Brad Lyell, before pushing past them. As Mick headed on up the road, I jumped in with Les and Brad, my cadence sitting somewhere between 40 and 50 RPM.

At the start of this post I wrote about the joys of the social aspect of cycling. Playing lanterne rouge throughout the 7 Peaks series has been a great opportunity to really tap into that side of the sport. I’ve had the opportunity to ride with cyclists I would never have ridden with, hear life stories I wouldn’t have heard, learn things about the world I wouldn’t have.

Case in point: my chat with Les. I really enjoyed hearing about the stint he did as an abalone diver, spending five consecutive hours underwater, five or six days a week for nine years in a row. It was inspiring to hear about the time his mate blacked out underwater and how Les saved his life, helping his mate to surface slow enough that he didn’t get the bends, but fast enough that he didn’t suffer any lasting damage. Conversations like that really make the climbs go faster, even when you’re grinding away in the big dog.

As easy as I’d found climbing in the big ring so far, I was still apprehensive about the steep final section of the climb. But even though my cadence dropped into the 20s a couple of times, I managed to get to the top, following Les and Brad into the village.

After a brief chat with a few other riders, and after swatting away what seemed like a million flies, it was time to head back to the lodge and pack up before the long drive back to Melbourne.

The good folk at Cycling Express have been good enough to provide a handful of $20 vouchers for every ride in the series. After a bit of back and forth, Andy and I would like to award the vouchers for the Mt. Buller trip to:

A special mention should also go to Adam Gruer (Mr Painface from the Mt. Baw Baw ride) who rode from Bundoora to Mirimbah to join us for the 4pm session on Saturday. By the time he got to the lodge at the end of the day, he’d ridden nearly 215km with more than 3,500m of climbing. A great effort! (Adam’s ride can be found on Strava in two parts here and here).

And so, as ever, I need to say a bunch of ‘thank-you’s before wrapping this up. Thanks to Emma & Tom’s for providing the tasty and popular post-ride juice. Thanks to Winners Nutrition for supplying the bars, gels and chews that everyone seems to love. Thanks to Cycling Express for providing the series’ major prize — a Mavic Cosmic Elite wheelset — and the vouchers mentioned above.

Thanks to Darius and Viv at the Neringa Ski Lodge for looking after us — it’s a great place they’ve got and I’m certainly keen to go back. Thanks to Nigel for the lift up to Buller on Friday and thanks to Rohan for the lift back home on Sunday arvo. Thanks to Tammy van Bergen for supporting yet another ride in the 7 Peaks series, including shooting some great photos. And thanks to Kirsten Simpson once again for taking some amazing shots for us, some of which you see in this post. To see more of Kirsten’s work, visit her website.

And, finally, thanks to everyone who made the journey up to Mt. Buller for the weekend, particular those that stayed with us at Neringa. It was a great crew and thanks to them I had a great time both on and off the bike.

And so that leaves us with just one more ride in the 7 Peaks Domestique Series: Mt. Baw Baw. It’s going to be a fitting finale to what has been a fantastic bunch of rides and I hope you can join Andy, myself and the 115 others who have already RSVP-ed. To sign up, just head to the Facebook event page or drop me an email.

Until next time, thanks very much for reading!

The order of these names doesn’t necessarily reflect the order in which riders finished the climb. If we haven’t got you on the list, let us know! If we’ve spelled your name incorrectly, you should have written it more clearly in the notebook … but let us know and we’ll fix it up! If you’d like your climb time listed, email me with the details (and a Strava link or similar to prove it!)