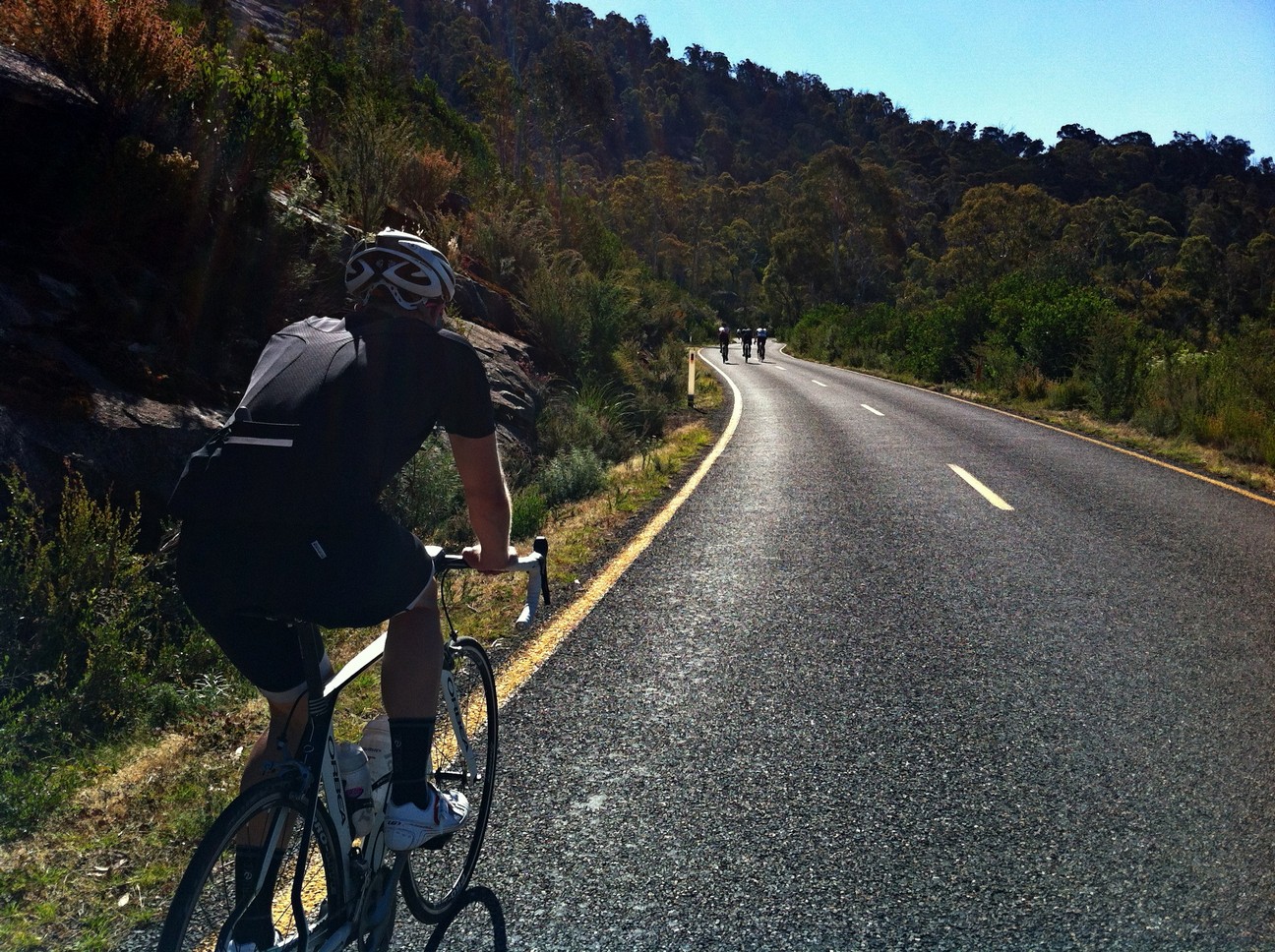 This is the third of four blog posts about a recent trip to the Victorian Alps for the 7 Peaks Domestique Series. Parts one and two here can be found here and here respectively.

Day two of our trip to the Victorian Alps was always going to be long and tiring. We’d left Falls Creek at 6am, climbed Mt. Hotham, headed to Bright for lunch … and the day wasn’t even half done.

I’d discovered at the top of Mt. Hotham that I had a loose spoke and so my first mission after getting to Bright was to head to the bike shop. My plan was to get the wheel trued or, failing that, get the loose spoke tightened enough to get me through the afternoon’s climb up Mt. Buffalo. The folks at the LBS were most unhelpful, refusing to even tighten the loose spoke. In the end I bought myself a spoke key and fixed the problem in 2 minutes (the spoke is fine a week and half and ~200km later).

With the spoke issue dealt with it was over to Bright Velo to meet with some of the riders in our group, have something to eat and prepare for a film shoot that was happening that afternoon.

Last year Tourism Victoria released a series of four videos with Australian road race champion Simon Gerrans to promote 7 Peaks. Now, Tourism North East has commissioned a videographer to shoot the remaining three videos in the series, starting with Mt. Buffalo. The cool part: the videos are being shot to coincide with the 7 Peaks Domestique Series. It’s an exciting development for The Climbing Cyclist and Hells 500 and it was great to be part of the project.

After wolfing down some lunch, a small bunch of us rode from Bright Velo over to the Mt. Buffalo tollbooth. Not long after we arrived the cameras started rolling as Andy and I gave a short presentation about what the riders could expect from the climb.

But the video wasn’t about Andy and I — it was about a small bunch of riders that had been plucked from our main group; riders who had a story to tell. As the rest of the group set off up the road, our film stars did one-on-one interviews, before joining us on the climb with cameras focused on them. I look forward to seeing how the video turns out!

Matt ‘Fletch’ Fletcher and Cyril Dixon were kind enough to volunteer for lanterne rouge duty for the main bunch which meant Andy and I could move up the road, chatting with riders as we went.

It all started off well — we weren’t going hard enough between groups for the fatigue from three climbs in two days to cause any great difficulty. It was great having riders ahead of us to aim for as we pushed up the road and it was fun slowing down to chat to people as we went past.

It was particularly cool to see Naomi Cameron out there. Her and Andy had been emailing each other for a few weeks, with Naomi expressing her interest in coming along but also her nervousness at never having done much climbing before. It was great to see Naomi out on the mountain and we suspect she might have been downplaying her ability a little bit — it took us nearly 10km to catch her!

It wasn’t the hottest day I’ve ever experienced on Mt. Buffalo but with the temperature in the 30s and the fatigue starting to set in, things started to get pretty tough. As Andy and I continued to jump from group to group, I became increasingly grateful for the short rest we’d get while speaking with other riders. But then it would be time to move on and I’d be feeling the many kilometres of climbing I’d already done that weekend.

I’ve written in recent articles about how valuable the support from Andy’s wife Tam and my partner Sharon has been and what better way to illustrate that support than to share a brief moment 11km into the climb.

It was hot, I was dehydrated and my water bottles were nearly empty. But as Andy and I swung around the stunning right-hand switchback at Mackeys Lookout we looked to our right and saw a handful of water containers by the side of the road. Not only were we able to top up our water bottles but the girls had gone to the trouble of filling the containers with ice. So good.

After a quick drink Andy and I pushed on. As the kilometres ticked slowly away, I knew we were getting to the end of the main section of climbing and the start of the Mt. Buffalo plateau (about 18.5km from the start of the climb). I was very much looking forward to a bit of a respite — sure, it’s not a particularly challenging ascent on paper, but the constant climbing with little respite, combined with building fatigue made Mt. Buffalo much harder than it might otherwise have been.

I got dropped by Andy within a couple hundred metres of the plateau and from there I was on my own. I descended to the plateau, grateful for the rest, but before I knew it, I was alone and climbing the final grindy kilometres to Dingo Dell. Again, the climbing was never particularly difficult — I doubt it gets over 6% much at all — but I was on my last legs and extremely grateful when I saw Tam and Andy’s car at the turn-off to the cafe.

Of course I wasn’t the only one that had suffered on the climb. There were many riders that had also done Mt. Hotham earlier in the day and more than a few that had also done Falls Creek the day before. Those last few kilometres to Dingo Dell seemed to cause a lot of discomfort for many of us, and there were plenty of relieved faces (and some tears) from riders as they rolled in to finish the climb.

One of the most impressive efforts for mine was that of Connie Dekter who made it through the climb despite having throw in the towel a number of times before the summit. But, somehow (and with a little encouragement from Cyril, Fletch and Connie’s husband Uri, I suspect!), Connie pushed on and made it to the top. It’s efforts like these that really define what we’re trying to do with the series — get people who wouldn’t normally climb hills to come along and achieve something they didn’t think was possible. Inspiring stuff!

We’ve been lucky enough to have the support of Cycling Express throughout the series and they’ve provided a handful of $20 vouchers for us to hand out to those who put in inspiring performances. After a bit of back and forth, Andy and I would like to give vouchers to the following people for their efforts on Mt. Buffalo:

And while we’re on the subject of donating one’s time, I’d like to thank Tam and Sharon again for supporting yet another ride in the series. As mentioned, it was awesome having water halfway up the climb, but the support the girls gave went far beyond that. I know all the riders were extremely grateful and it’s that kind of support that’s really helped make the series into what it is.

Thanks too to Emma & Tom’s for the post-ride juice, to Winners Cycling for providing energy bars, gels and the like, and thanks again to Cycling Express for the vouchers and for providing the series’ grand prize: a Mavic Cosmic Elite wheelset. To go in the draw for the wheelset, you need to do one simple thing: ride the 7 Peaks climbs with us. One climb gets you one entry, two climbs gets you two entries … and so on.

Ask me what my favourite descent is and I’ll probably say Mt. Buffalo. So even though I was exhausted from a long, tiring day, and even though I had spent several hours relaxing at the top, waiting for riders to trickle in, and even though Sharon had our car there and I had the option of jumping in, I wasn’t going to miss the descent for anything.

And I’m glad I didn’t. The long straight sections,  the amazing views, the consistent gradient, it all made for a fantastic descent — the best in the state in my opinion!

But even then, at 7pm, with the two climbs done and the bike safely in the car, the day wasn’t over. With a bunch of others Sharon and I headed back to Bright Velo for some dinner and a well-earned drink or two.

It was a fitting way to end a long and tiring day that had started at 5am and that had delivered more than 180 successful climbs of Mt. Hotham and Mt. Buffalo.

I fell into bed at about midnight, my legs screaming at me after two long, hard days on the bike. The scariest thing of all? The longest climb was yet to come.

A big thank-you to Kirsten Simpson and Wil Gleeson for providing the terrific images you see in the post above and the gallery below. To see more of their photos, head over to the Hells 500 Facebook page. The Strava file from my ride can be found here.

The order of these names doesn’t necessarily reflect the order in which riders finished the climb. If we haven’t got you on the list, let us know! If we’ve spelled your name wrong, you should have written it more clearly in the notebook … but let us know and we’ll fix it up! If you’d like your climb time listed (from the tollbooth to the plateau), email me with the details (and a Strava link or similar to prove it!)