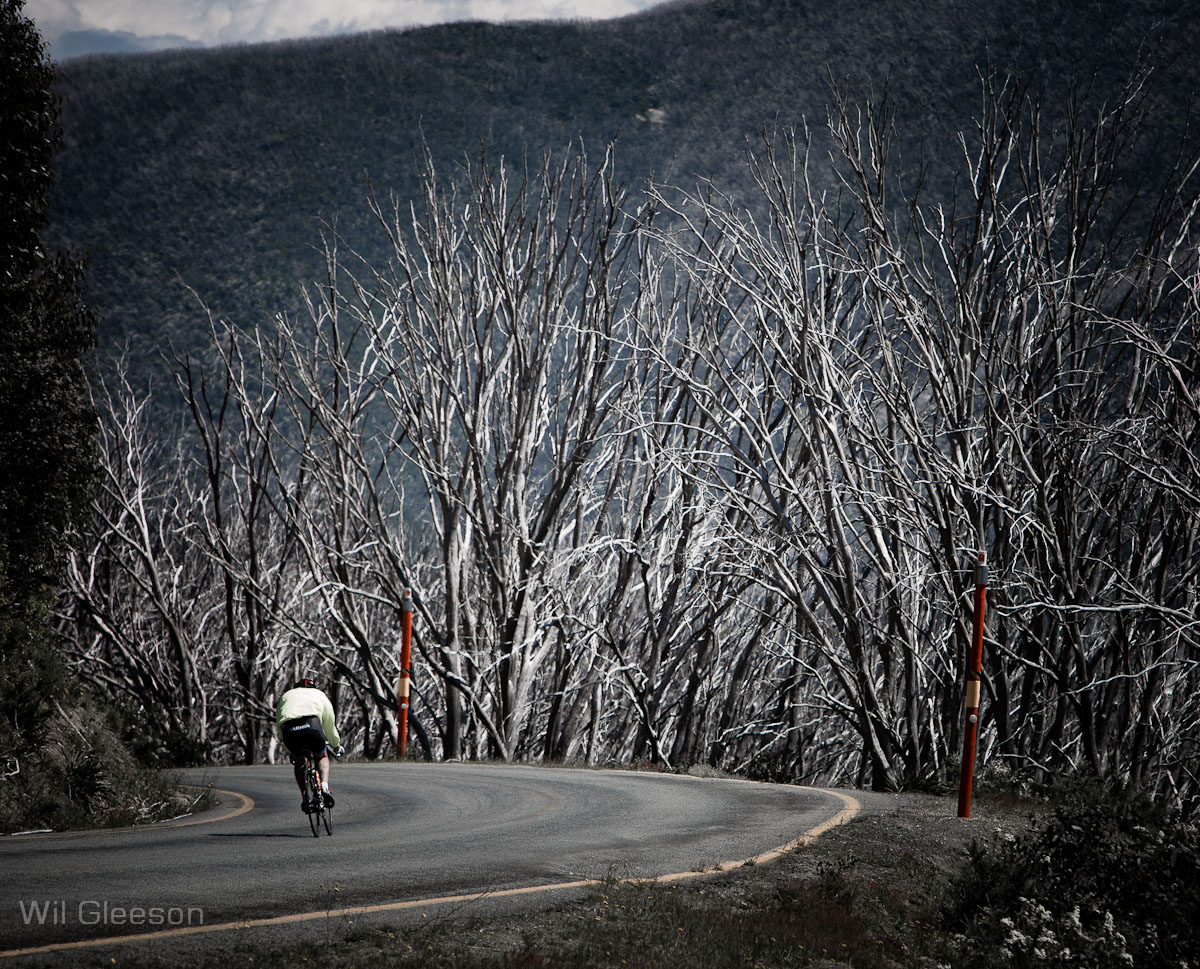 This is the first of four blog posts about a recent trip to the Victorian Alps for the 7 Peaks Domestique Series. Stay posted for the remaining instalments.

As a cyclist in Melbourne, there are no shortage of great riding routes nearby. Beach Road is pretty much at our doorstep, the Dandenongs are close to hand and the Kinglake Ranges are only an hour’s ride away. But as good as these areas are for a weekend ride, they fade into the background when placed next to the Victorian Alps.

With a handful of the country’s best and most challenging climbs within riding distance, the Victorian Alps really are a must-see for any cyclist who’s keen on a bit of climbing. For the past few years I’ve been fortunate enough to take more than a couple trips to the Alps and they’re always a highlight on my cycling calendar. And with four rides already completed in our 7 Peaks Domestique Series, it was time to head to the Victorian Alps to tick some more climbs off the list.

My partner Sharon and I drove up on Thursday and joined 10 others at Quay West Falls Creek where we’d stay for the next three nights. After settling in on Thursday night, we were up early on Friday for the first ride in our trip: the climb from Mt. Beauty to Falls Creek.

It was surprisingly cold when we left the hotel — no more than 5°C — and as we began the frigid descent I was glad I’d gone for arm warmers, leg warmers and a jacket. But by the time we reached Mt. Beauty about 45 minutes later I was regretting the extra layers and sweating profusely.

After a few minutes spent chatting to the riders who were starting to congregate, we got our pre-ride briefing underway. It looked as if we might have a sizeable bunch if the crowd in front of Andy and I was anything to go by.

A definining feature of our Domestique Series is the fact we always have a lanterne rouge — a rider who sticks at the back of the field to make sure no-one is left behind, to offer some support for riders that might be struggling a little. Andy’s sister Nicole had kindly volunteered to take up lanterne rouge duties for the climb which left Andy and I free to work our way through the crowd and ride at our own pace.

I started near the back of the field, riding with my good mate and eQuipo tranQuilo team mate Matt ‘Fletch’ Fletcher. As we got settled into a rhythm in the opening kilometres of the climb we passed a whole bunch of riders, saying ‘hi’ as we went. One of the funniest moments of the day was when Fletch and I were riding alongside one bloke whose name I can’t remember, having a bit of a chat. At one point the bloke turned to Fletch and said ‘So, are you the Fletch Bomb?’

I think it was the first time Fletch had been recognised from Twitter and he was a little taken aback. Deep down I’m pretty sure he loved it.

As we powered through the undulating middle section of the climb, Fletch and I were joined by Brendan Canty — the bloke who’d tapped out an incredible 48 minute effort on Mt. Buller a few weekends before. I knew if Brendan decided to lift the pace there was no way I could stay with him but he seemed happy to take it easy and chat.

As Fletch, Brendan and I approached the Kiewa River and the start of the climbing proper we continued to pass many riders. I told Fletch that my plan was to go under 1 hour for the final ~14km of the climb (from the river) but that I was also keen to save something in the tank for the other rides we had planned that weekend.

But as soon as we crossed the bridge, any plan to take it easy went right out the window.

In an attempt to push for a sub-60-minute time I found myself riding rather harder than I might otherwise have done. Before long we lost Fletch off the back (sorry mate!) and it was just Brendan and I picking off riders as we went. I was much closer to my threshold than I would have liked but once I started the climb hard I figured I might as well keep going hard.

Of course, just because it was a hard effort for me doesn’t mean Brendan was in any difficulty. In fact, while I was huffing and puffing and trying not to go into the red, Brendan was tapping away very comfortably, enjoying the cruisy ride. On one hand it was demoralising to see how easily he was doing it (and how easy it was for him to chat), but on the other hand it was really great to have someone to distract me from the discomfort of pushing myself.

The last 4km from the tollbooth to the summit always seem to be a little harder than the rest of the climb. Whether that’s due to a slightly steeper gradient, cumulative fatigue, increased altitude or a combination of these, I’m not sure. But they certainly did feel harder than the lower slopes of the mountain.

There was, however, one minor downside. On one of the very few flatter sections in that final 14km from the river I remember coasting very briefly to let my body recover before the next effort. As I did, I felt my heart flutter. I looked down and saw my heart rate increase to 206 beats per minute, then 227bpm before dropping back to 170-odd. Given that my heartrate at max effort is 196 this was slightly worrying.

It wasn’t painful or even uncomfortable and it only lasted about 3 seconds, but it did make me a little nervous. I’ll certainly be keeping an eye on it and if it happens again I’ll be looking to get some sort of professional advice.

But of course, the 7 Peaks Domestique Series is about far more than my own individual efforts. It’s about the dozens of other riders that join us for the climbs, to test themselves, to achieve something — whether that’s getting a stamp in their 7 Peaks passport or something bigger.

After Brendan and I reached the top I spent the next hour or so watching riders trickle into the village, all but a few with looks of great satisfaction on their faces. There were plenty there who were doing their first ever mountain climb, some who were out for a new PB and others who were just there for the 7 Peaks stamp. But everyone had a story; a reason for being there. It was great to hear those stories and to have helped people achieve a goal, however minor our assistance might have been.

In the end we had  82 riders make it to the top — an incredible turn-out given how far away from everything Falls Creek is. I’d be confident in saying most of the riders had made the trip up from Melbourne as well — an awesome effort.

It would be remiss of me not to thank our wonderful support crew of Tammy (Andy’s wife) and Sharon (my partner). You’ll be hearing more about them in the following posts, but it’s worth spelling out here just how much support they do provide. From handing out nutrition (thanks to Winners Cycling ), to dropping off water halfway up the climb, to taking photos, to taking names for the honour roll, to providing drinks at the end of the ride (courtesy of Emma & Tom’s) … Tam and Sharon did it all. Thanks so much girls!

And while we’re on the subject of inspiring efforts, Andy and I have a number of $20 Cycling Express vouchers to hand out to riders that impress us during the climbs. For the Falls Creek ride we’d like to award the vouchers to:

But the day didn’t end when we got to Falls Creek. Later that day three of us — myself, Evan Henley and John Gogis  — headed back down to Mt. Beauty for another tilt at the mountain. There were a number of riders that weren’t able to get up to Mt. Beauty from Melbourne in time for the morning session and so an ‘unofficial’ afternoon session was put together.

In the end there were 9 of us for that second climb — four guys and five girls! — and it was a great little bunch to ride with. We stayed together for the first few kilometres but after that things started to split apart. I found myself at the front riding with Shari Aubrey from Lead Out Cycling.

It was terrific chatting to Shari as we made our way up the mountain in the late afternoon sun. But as we hit the final 4km of the climb, the previously constant chatter dropped off quite noticeably. I don’t know about Shari, but I was certainly struggling after the hard effort I’d put in earlier in the day. It was quite a relief to get to the village for the second time and Shari and the other girls were stoked to have made it up. Great stuff ladies!

After a dip in the hotel’s cold plunge pool and toasty-warm spa it was time for an amazing pasta dinner courtesy of Tammy, Nicole and one of our other roommates, Julia. It was the perfect end to a tiring and challenging day and it set us up perfectly for the big day we had ahead of us.

Thanks very much to Wil Gleeson and Kirsten Simpson who provided most of the stunning images you see in this post and in the gallery below. To see more of their photos, visit the Hells 500 Facebook page. Thanks too to Neil Smithies for the video you can see embedded below. The Strava files from my morning and afternoon rides can be found here and here respectively.

The order of these names doesn’t necessarily reflect the order in which riders finished the climb. If we haven’t got you on the list, let us know! If we’ve spelled your name wrong, you should have written it more clearly in the notebook … but let us know and we’ll fix it up! If you’d like your climb time listed, email me me with the details (and a Strava link or similar to prove it!)