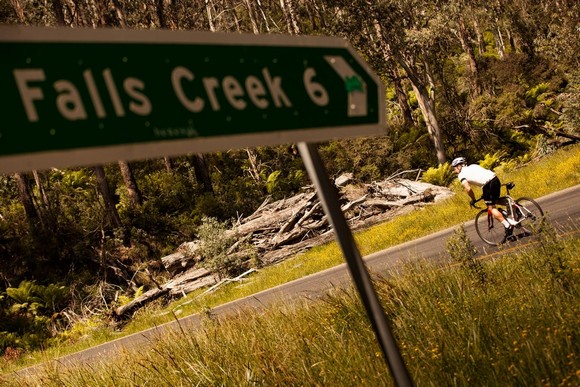 This is the first of four blog posts about a recent trip to the Victorian Alps for the Domestique 7 Peaks Series. Stay posted for the remaining instalments. You can click on any of the images below to see larger versions.

Before I caught the cycling bug I would spend the period between Christmas and New Year’s Eve watching the Boxing Day test match. If I wasn’t at the MCG catching the game live, I’d be sitting on the couch at home, my feet up. But in recent years, that tradition has made way for something slightly more strenuous — an annual cycling trip to the Victorian Alps.

From December 27 to December 30 myself and several hundred other cyclists headed to the high country for the Domestique 7 Peaks Series — a collaboration between this website and Hells 500 that runs alongside Tourism North East’s 7 Peaks Alpine Ascent Challenge.

This season’s three-day trip started with a climb up Falls Creek on the Saturday afternoon before tackling three more mountains in two days. But I had to get through the Falls climb before I could think about the rest of the weekend. 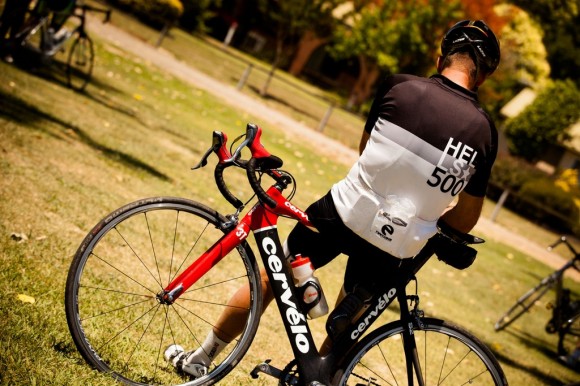 After driving up to Falls Creek on Friday, Hells 500 founder Andy van Bergen and I had headed out with a small group on Saturday morning to ride around the dam at the top of Falls Creek and get our first taste of the high country for this season. It was a glorious morning, spoiled only by a slight twinge in my left knee which, I’ve been told by a physio, is the result of patellar tendinitis.

That afternoon, those of us who were staying at Falls Creek descended to Mt. Beauty, set ourselves up in the park and waited for everyone to arrive. Many riders had opted to beat the heat by riding the climb earlier in the day, the last of those making their way up the hill as we descended.

If their open jerseys and dropped heads were anything to go by, the climb was going to be challenging. And with the temperature nudging 40°C at Mt. Beauty more than a few riders were apprehensive about the role the heat would play.

After a pre-ride briefing in the shade at 2pm we sent the slower riders off first. I hung around to the end, happy to put my hand up for lanterne rouge duties — that is, being the last rider on the road. Andy, too, waited for the last riders to leave and in a small group we made our way slowly through the opening kilometres.

With little shade to speak of, those first 4km of consistent climbing were tough and I focused on trying to stay comfortable in the heat. Even though I wasn’t pushing hard at all, my heartrate suggested otherwise, thanks to the heat.

The undulating middle section of the climb features several brief downhill sections, and these were most welcome. So too were the brief shaded sections which provided some respite from the baking sun. I knew it was about 15-20ºC cooler at the summit but it wasn’t until the closing kilometres that we really noticed the temperature start to drop and a cool breeze pick up. 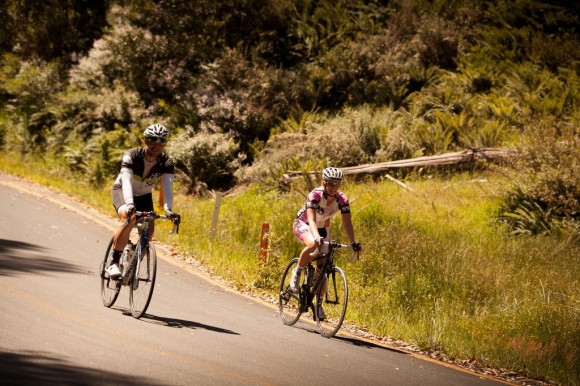 You’d be forgiven for thinking that riding lanterne rouge is a bit of a drag — after all, you’re riding considerably slower than you normally would, you’re taking lots of breaks, and you’re generally riding with people that are so exhausted that they can’t really muster much of a conversation. But I love it. 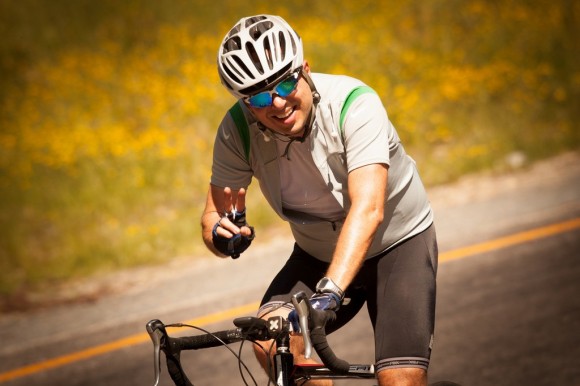 There’s something so refreshing about the enforced change of pace — it gives you the chance to really appreciate the climb you’re on and drink it all in. When I rode Falls Creek during last year’s Domestique 7 Peaks Series I did so with now-NRS rider Brendan Canty who pushed me to my absolute limit the whole way up.

As enjoyable as that was — setting a new PB and challenging myself — I really didn’t get a chance to appreciate my surrounds and take in the scenery. And the scenery at Falls Creek really is excellent. 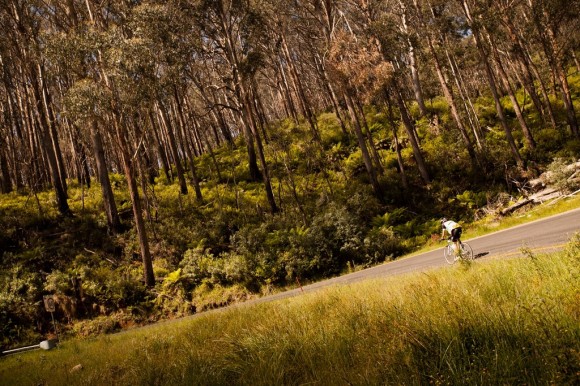 I spent the last half of the climb riding with Mick Beasley whom I’d ridden with at Mt. Buller during last year’s series. I knew he would be able to make the top — and I suspect he did too — but it was slow going and we stopped a number of times. But I really didn’t mind.

As we entered the final 13km we caught sight of a rider — Marco Luthe — a couple hundred metres ahead of us and it wasn’t until about 5km later that we caught him. When we did Marco had his head down over his handlebars, standing in the shade by the side of the road. He’d hit the wall and was convinced he wasn’t going to make it.

For the next 5km or so Mick and Marco made their way slowly and painfully towards the summit. Sometimes Mick would be at the back, sometimes Marco, sometimes they’d ride together. 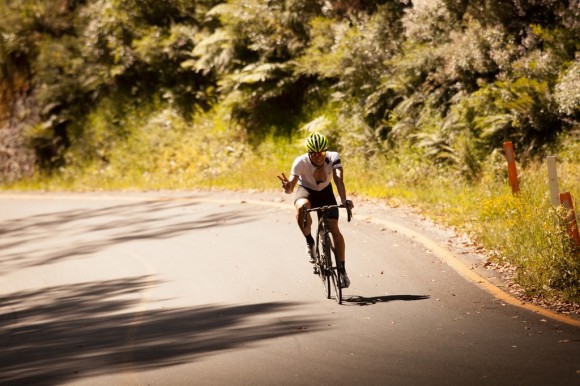 When the famous hairpin came Marco was dismayed to learn that he still had 6km to go. And when we reached the tollbooth at 4km to go Marco dismounted and spent some time in the shade, trying to find a way to convince his body to go on. The heat had taken its toll and Marco was at his limit.

As lanterne rouge it’s easy to forget how much someone must be hurting when you’re doing it easy, but I only needed to think back to last year’s 3 Peaks Challenge to get a sense of what Marco was going through.

And then his mate Adam “Painface” Gruer rolled down the hill and joined up with us. Having come this far I reckon Marco would have made it anyway but having his mate there really seemed to help with his motivation.

With just a few kilometres to go we turned a corner and saw the Falls Creek village ahead of us — an instant motivation boost. Marco seemed to have found a bit of energy as he surged ahead as Adam and I scrambled to keep up. And then, a few minutes later, we made it.

Seeing Marco make it through a climb he was convinced he couldn’t was nothing short of inspirational. And being there to see him go from utter despair with 8km to go, to tearful relief at the top was as satisfying as anything I’ve done on the bike. Mick too had made it to the summit — a similarly inspiring effort. 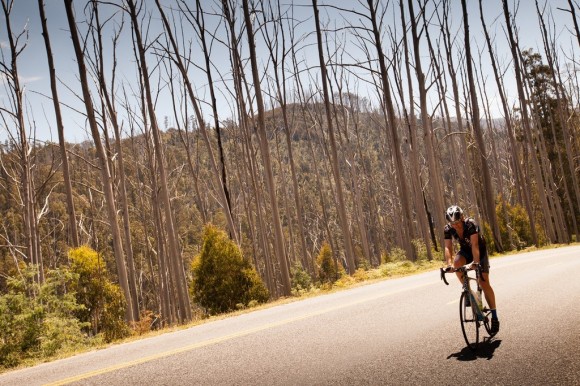 The satisfaction of seeing those two guys finish was heightened by the fact my knee hadn’t hurt on the way up. I’m not sure if it was the Nurofen, the knee brace our ride doctor Dr Carl Le had given me, the slow pace or a combination of these, but I wasn’t complaining. I just hoped it would hold out for the rest of the rides.

That night we enjoyed dinner at Last Hoot near the Falls Creek village green before Andy and I took a bunch of the crew up to nearby Mt. Mackay to watch a stunning sunset. It had been a long, hot day and the following day was going to be even bigger.

A big thank you to all of the amazing volunteers who helped us out on this ride: Sharon, Tammy, Linda, Nigel and Dr Carl. Thanks too to our sponsors: Croydon Cycleworks, Winners Nutrition, CycleCover, Nemisis, Hammer Nutrition and CyclingExpress.com.

Congratulations to Marco Luthe who wins the CyclingExpress.com voucher for the most inspiring effort on the Falls Creek ride.

All photos in this post appear courtesy of Kirsten Simpson. To download low-resolution versions of any of the photos Kirsten took at Falls Creek, head here and use the password “FallsCreekBunch”. You can support Kirsten’s great work by buying a high-res version of any image for just $7.95.

A full list of finishers can be found here. If you completed the climb but forgot to write your name down, send an email to Matt with a link to a Strava file or equivalent and I’ll add you to the list.