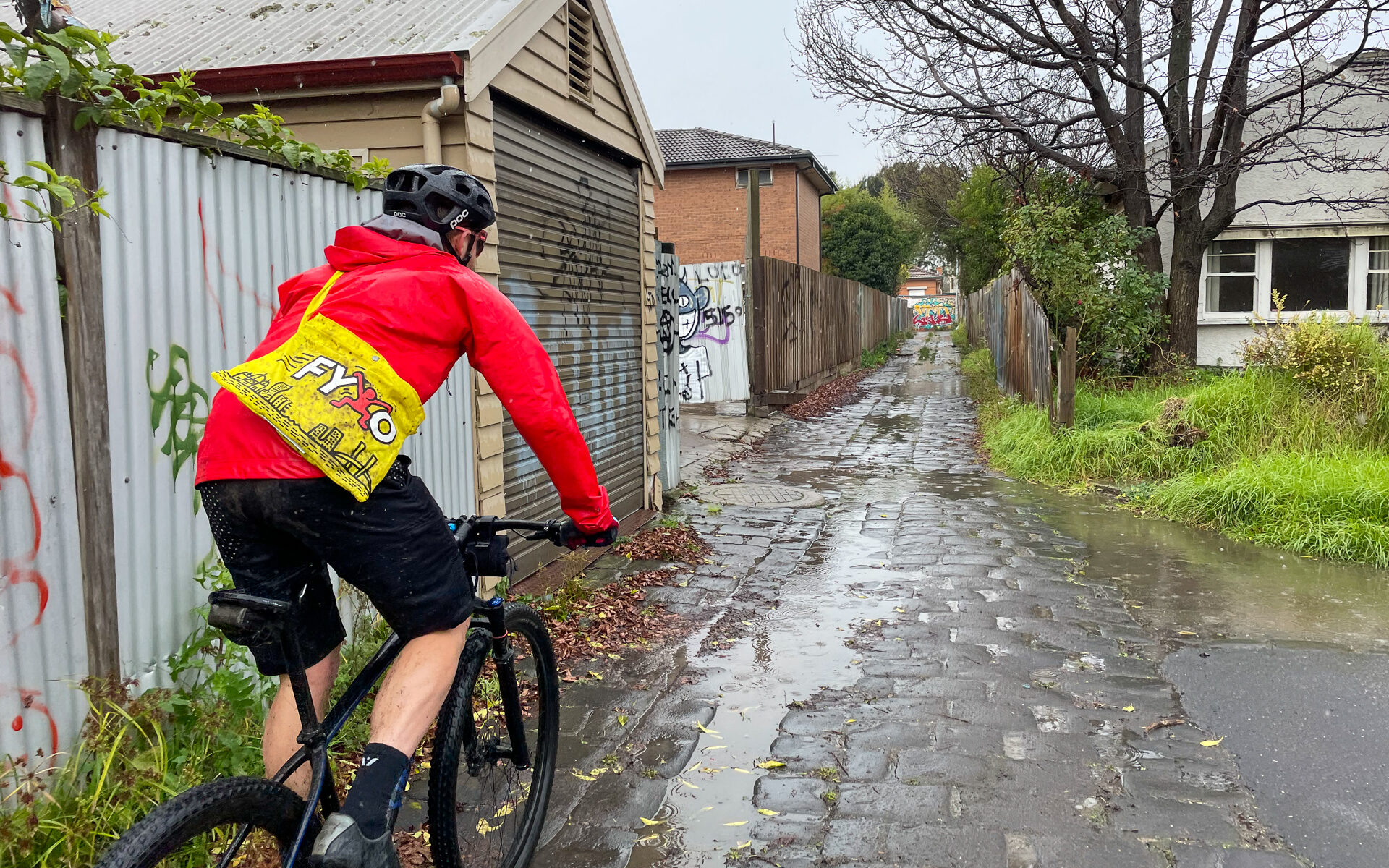 There aren’t many cycling events like FYXO’s Melburn Roobaix. Held in the suburbs of Melbourne’s inner north, this recreational ride is a day of fun, exploration, and discovery that attracts a diverse array of the city’s many cycling subcultures.

A full decade has passed since my last visit to the ‘Hell of Northcote’ so I was excited to return this past weekend to see whether Melburn Roobaix is still as great as I remembered. I wasn’t disappointed.

The format of Melburn Roobaix is really simple. Turn up at the start, grab a map, then head out to ride a bunch of cobblestone alleyways, bike tracks, and dirt paths around Melbourne, before reconvening at the Brunswick Velodrome to celebrate a day of “being big kids on bikes”.

While it’s inspired by the legendarily difficult pro race Paris-Roubaix, Melburn Roobaix is decidedly more chill. In fact there’s not even really a set route. The map contains a serving suggestion, but riders are free to link the cobblestone sectors in any way they please … or skip a bunch of sectors and spend the day drinking with mates instead. Both are valid ways to ride Roobaix.

I was lucky enough to spend my 2022 Melburn Roobaix riding with my old friend Andy van Bergen plus the lovely Paddy and Katie (plus their 15-month-old Edie in a trailer Paddy was towing!) After meeting at the start, we set off to tackle the day’s 11 cobblestone sectors and the kilometres of bike paths, backstreets, and dirt tracks in between.

I was riding my Cannondale Synapse with 28 mm Panaracer GravelKing slicks and while that was the most rugged option available to me on the day, it took approximately five minutes to realise I needed grippier rubber … and more of it. At the first sign of a slick, soggy dirt track I was fish-tailing all over the place, losing traction, and generally scaring myself every few seconds. It was glorious.

I’m not going to give you a full breakdown of every cobbled sector because, truthfully, they’re all a bit of a blur. A blur of large, slippery, bluestone pavers, with big gaps between them, surrounded by large, often unavoidable puddles that were ankle deep in places and that forced you to hope they were free of anything that would cause a puncture and/or a crash.

On reflection, much of the ride is a blur. I know we started with a loop around Ivanhoe before swinging west, but I barely registered where we were at the time, and I certainly can’t recall the details now without looking at a map. The prevailing sense I have from the ride, though, is of several enjoyable hours spent following mates down a handful of roads and paths I’d ridden before, and many I definitely hadn’t.

Here are some other things that stand out from the ride:

Cycling’s been a bit of a solitary pursuit for me lately. What with having a little one at home, the fact it’s been a particularly cold and wet Melbourne winter so far, plus an on-again-off-again knee injury, riding has been a bit of a ‘go for a short spin whenever you can manage it’ proposition. And while I’ve enjoyed the riding I have done, in truth, it hasn’t been as satisfying as it normally is.

I’m not training for anything, I can’t ride hard because my knee isn’t good, and I can’t remember the last time I did a cycling event, rather than just going for a ride. Often when I head out for a ride these days it’s simply because it feels like I should, or because I’m feeling a little down and I know a quick spin will help.

So to be able to do a ride of some significance on Sunday? That was tremendously satisfying. It didn’t matter that it was soaking wet, or that my knee’s probably going to be sore for a couple weeks afterwards. It was just nice to do something a bit different. A bit exciting. With others.

It took me 3 hours and 15 minutes to ride a total of 47 km on Sunday, plus another 90 minutes of time spent off the bike. That’s just the sort of ride Roobaix is – it’s not about who’s fastest. Not even a little bit. It’s about getting people together and riding like you’re a kid again, exploring the world around you.

In one sense Melburn Roobaix is a loving tribute to our city’s wonderful, historic laneways, plus the bike paths and dirt tracks that bring so much joy to so many cyclists. But it’s so much more than that. At its heart, Melburn Roobaix is a celebration of the power and joy of the bicycle, and of the diverse cycling community that calls Melbourne home.

There’s no other event on the calendar that attracts everyone from hardcore roadies, to mountain bikers, to folks riding fixies, to e-bike commuters, to those on novelty bikes. It’d be remarkable for an event to bring together such different sub-genres of cycling like this if FYXO’s Melburn Roobaix hadn’t been doing it for more than a decade and a half by now.

One of the coolest things about Roobaix is seeing the effort so many people go to in creating costumes for the day. Take a look at the #melburnroobaix hashtag on Instagram to see some of the wonderful bikes and outfits that were on show on Sunday.

Just to finish up, I want to say thanks to Andy, Paddy, and Katie for letting me tag along on Sunday. I had a blast. And, of course, a big thanks to Andy White and the FYXO crew for putting on such a wonderful event.

A decade ago I wrote that ‘Melburn Roobaix is a true icon of Melbourne cycling, an event the unifies cyclists of all abilities in a way that no other event really does.’ That statement was true then and it’s certainly still true all these years later. I just hope it’s not another decade before my next visit …

Follow the link to check out my Strava file from the 2022 Melburn Roobaix.