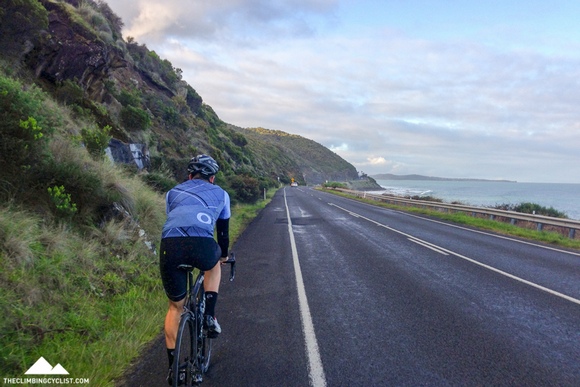 This time last year I was over in Europe, reporting from the Tour de France and doing some amazing riding while I was at it. This year I’m covering the race again for CyclingTips but from back here in Melbourne. I’m certainly not complaining — I get to watch the Tour de France and write about it for a living; how cool is that?! — but sitting alone in my lounge room until 3am every day is a little less glamorous than being at the race in person.

But last weekend, Andy (of Hells 500 and CyclingTips fame) and I plus families child, headed down to Aireys Inlet for a couple of days away. For Andy and I it was a working holiday — I was still up until after 3am reporting on the Tour each day — but just the change of scenery, even for a couple days, really helped to mix things up. Importantly, we also found some time to go for a couple of rides along the Great Ocean Road.

On the Saturday Andy and I rode into Lorne then checked out the Erskine Falls climb we’d both heard about but never done. From Lorne to the top of the climb (from which it’s about 1.5km downhill to the Falls) it’s 9.1km at an average gradient of 5% but this climb isn’t a consistent ascent like, say, Skenes Creek Road. The climb consists of a series of ramps and flatter sections, with some of the steeper parts (particularly straight out of Lorne) pushing beyond the 10% mark.

I found it to be quite a challenging climb, perhaps largely to the fact that I’ve done so few sustained climbs in recent times. Reporting on the Tour has made it hard to get out for long rides (I’ve been working in the afternoons too) but the fact it’s winter has been a slight deterrent as well. 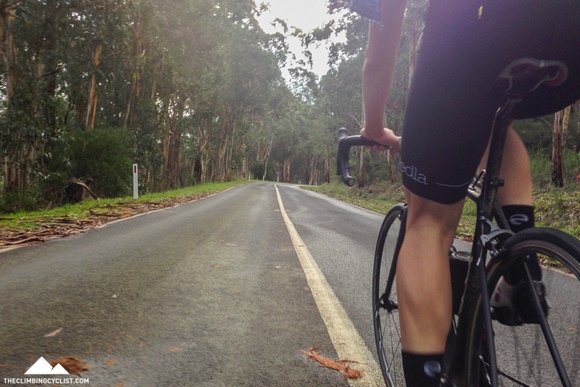 From the top of the climb we checked out Erskine Falls itself, albeit just from the top viewing area — we didn’t want to leave our bikes for too long. I’m keen to come back at some point and check the place out in more detail; it seems beautiful there.

The descent into the Erskine Falls carpark is very steep, which we’d heard about but didn’t really appreciate until we were descending it. And of course the climb back out was very tough. On wet roads, the two ramps of 20%+ were quite a challenge, but an enjoyable one given we were surrounded by the lush rainforest of the Otway Ranges.

The descent to Lorne was terrific and the run back to Aireys Inlet felt fast. Holding Andy’s wheel over the 2.6km climb along the way was good fun but very challenging. 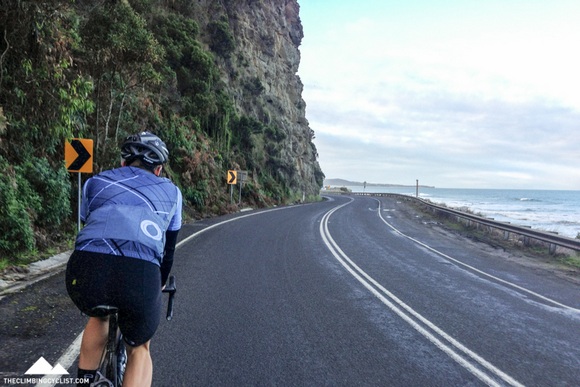 The following day Andy had to head off to a work event in Canberra so I ducked out for a quick spin on my own. It wasn’t particularly long — just 40km to Lorne and back — but it was great to be able to ride along the Great Ocean Road for the second day in a row. It’s hard not to enjoy yourself when you’re riding along some of Australia’s most impressive coastline, even if it is raining.

A lot of people ask whether it’s safe to ride on the Great Ocean Road given the amount of tourist traffic it holds, but I’ve never had any problems along there. There’s a hard shoulder for most of the section we were riding over the weekend and not a single car gave us any grief or came too close. Granted, there wasn’t as much traffic along there as you’d see at the height of summer, but even when riding along there in the warmer months I’ve never had any problems. Just keep left, be mindful of other road users and you should be fine.

In Lorne I was keen to check out a short climb I’d heard a lot about. Lorne is filled with short but very steep climbs, the toughest of them reportedly being Francis Street. I’d heard of strong climbers not being able to get up it so, naturally, I was keen to see if, by some miracle, I would be able to.

It starts off comfortably enough — well, as comfortable as 15% or so can be — but after a couple hundred metres you head around a sharp right hander and the road ramps up ridiculously. The bike and my knees were creaking as I tried to wrestle my way up this wall of road. I was at my limit just trying to keep the bike moving and eventually I couldn’t. I unclipped just before I was about to topple over, defeated by the climb. 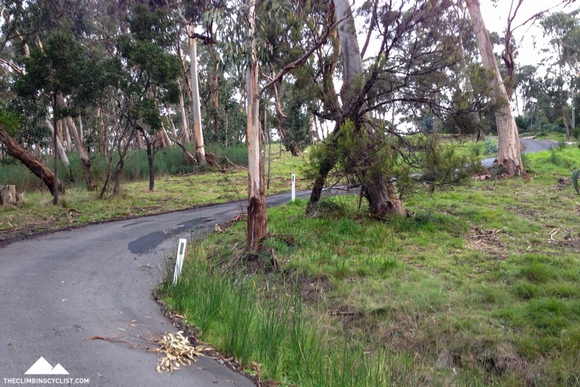 As far as I can remember this is the first climb I’ve ever had to bail on completely. The first time I climbed Mt. William in the Grampians I had to stop on the steep stuff, but I got there in the end. Never have I gotten halfway up a climb, stopped and thought “I can’t do this. I’m turning around.”

Normally that sort of thing would worry me, but this time it didn’t — Francis Street is phenomenally steep. I challenge you to try and get up it on a road bike (I was running a 34 x 28 setup)!

The ride back to Aireys Inlet was a little sketchy with daylight fading fast, but I got there in one piece.

While it was only a short trip away, it was great to get out of the house for a couple days and to get a couple of great rides in. As good as the racing has been, I’m looking forward to the Tour being over so I can get back into a normal sleeping pattern (and get some more riding in!). But again, I can hardly complain — I make a living from writing about something I enjoy. Not many people get that opportunity.

Click here to see my Strava file from the second ride.