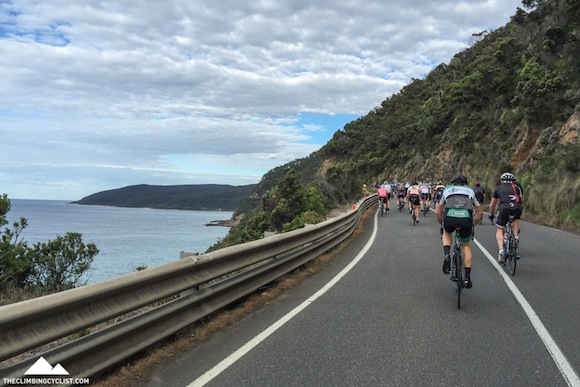 Amy’s Gran Fondo might look like a perfectly pleasant roll along the Great Ocean Road and up into the Otway Ranges but if you start near the the front it can be anything but. It’s not technically a race but, as I was reminded on Sunday, if you don’t want to race, you shouldn’t start near the front of the field.

I knew it was going to be fast, and I knew I wouldn’t be able to stay near the front for long, but that didn’t stop me from trying. When the pace picks up and you’re right there amongst it, it’s hard not to get swept up by the collective racing mentality. Even if you don’t have the legs to match that mentality.

I’d gone into the ride with a clear plan: take it easy and enjoy the scenery, weather and the chance to ride along the Great Ocean Road with no traffic. But when the countdown ended and we rolled out into the ‘neutral zone’, there was no time to admire the scenery. It was all about holding the wheel in front, holding my line, and hoping for the best.

There was a crash to my right inside the first 500 metres of the neutral zone — not a particularly confidence-inspiring start. Another crash, this one much bigger, left several riders on the deck after about 20km. This was turning into anything but the relaxing cruise I was after. I was keen to get through the opening 38km in a group if I could, but my first priority was just getting through it in one piece.

I’d started the ride with my CyclingTips colleague Jonathan but it wasn’t long before I’d dropped from the group he was in. I kept telling myself it was worth going into the red to stay with the group; doing so would save me energy later on, I surmised. As it turned out I didn’t have the strength or the fitness to be able to maintain my position.

I’d get myself in a good group for a few hundred metres and then, when the road tilted up slightly, I’d parachute out the back, scrambling desperately for wheels. Inevitably I’d get dropped, telling myself to wait for the next group from behind. I’d latch on to that group then promptly get spat out the back once again.

I saw Jonathan again briefly after 22km, saying ‘hi’ as the group I was in joined his. And then I was out the back again and I didn’t see him again until the end of the ride.

At the 32km mark I had averaged nearly 39km/h and I was paying for it. The vast bulk of my training in recent months has been endurance-related so I simply didn’t have the top-end to respond to the frequent accelerations in those early stages. And that’s to say nothing of the fact the endurance training I’ve been doing has been by foot rather than by bike.

With five or six kilometres to go before the day’s main climb, having been spat out the back of yet another group, I finally sat up, alone. It occurred to me that I’d been so focused on holding the wheel and fighting for position in various groups that I’d barely looked up and taken in my surrounds. I spent the next few kilometres trying to enjoy the fact I was riding on a closed-to-cars Great Ocean Road in perfect weather.

Since the start of the ride I’d been looking forward to the Skenes Creek Road climb. It would give me the opportunity to ride my own tempo without worrying that I should be saving energy by sitting in a group.

I found an easy gear and spun my way gently up the roughly 10km climb, reminding myself to enjoy the ocean views while I still could. The last time I did Amy’s Gran Fondo I’d passed a whole stack of riders; this time around a whole stack passed me. I focused on my own ride, trying to recover after the exhausting first hour.

I’d been hoping that I’d find myself in a good group at the top of the climb, to roll through with on the flatter section that followed. But I would be disappointed on two counts — no such group materialised, and the ‘flatter section’ wasn’t nearly as flat as I remembered.

Each time I’d get in something resembling a coherent bunch, we’d hit a short rise and I’d be unable to follow the inevitable acceleration. The short rises (like the groups behind me) kept coming, and I didn’t have the legs to maintain my position in a bunch for any more than a kilometre at a time.

It took until two-thirds of the way through the ride for me to find a group that I could stay with for any length of time. I’d stopped briefly at the drink stop in Forrest to top up my bottles (noting that I barely recognised the town from the last time I’d been there) before setting off alone again. A group rolled through two kilometres later, 73km into the event, and with a bit of effort I was able to scramble on to the back.

Mercifully, the road flattened out shortly afterwards and I could enjoy a few easier kilometres spent sitting in the bunch, conserving my energy for the closing section of the ride. It didn’t take long for the rollers to return, however, and each time the road tilted up I’d be fighting for position again, desperate to stay with the group to “save some energy”.

What had been a sizeable group of 20-30 riders when I hitched on thinned out every time we hit another roller. And then, when we hit the final 12km of the ride, the group, and my legs, exploded.

It’s not entirely uphill from the 98km mark to the finish line but it’s not far off it. The combined exertion of the opening section on the Great Ocean Road and the battle to stay in the group I’d been in had taken their toll. As the road ramped up my legs gave in and I was down in my lowest gear, grovelling my way up the final hill.

I crossed the line roughly 3 hours and 50 minutes after starting the ride, wasting no time before beginning the welcome descent back into Lorne. It had taken me roughly 20 minutes longer to finish the event this time around than in 2012 but that was to be expected. Last time around I’d been in decent form and certainly hadn’t been training for a marathon.

It’s easy to get caught up in finishing times, average speeds, staying with a fast bunch or even trying to beat your mates. And while these are all worth considering, to me, there are other things that make Amy’s Gran Fondo an important part of the Victorian cycling calendar.

I’ve already mentioned the car-free Great Ocean Road — that’s a huge drawcard, particularly if you take the time to enjoy it — but the beauty of the ride is as much about when it falls.

Held in mid September, Amy’s Gran Fondo always seems to mark the start of spring and the emergence of awesome warm-weather riding. It was a true delight being able to leave the arm warmers, leg warmers and rain jacket behind and enjoy the feeling of sunshine on skin. And while there was a little bit of wind around, particularly at the start, it didn’t diminish the enjoyment one bit.

In closing I’d like to say congrats to Brendan Canty who dominated the men’s ‘race’, attacking solo on the Skenes Creek Climb and riding the remaining 70km(!) solo to be first over the line and finish with the best time.

And in the women’s event, it was great to see Peta Mullens rocking the national road champion’s kit en route to a comprehensive victory. It’s interesting to note that Peta took home considerably more in prizemoney by winning the Amy’s Wall hillclimb event on Saturday and Amy’s Gran Fondo than she would have if she’d won the Amy’s Otway Classic National Road Series race held on the weekend!

And finally, for those of you that love challenging yourselves on steep climbs, here’s something worth checking out. Last time I was in Lorne I tried climbing one of the many ridiculously steep streets in the town called Francis St, a climb that quickly got the better of me, as I wrote a few days later:

The bike and my knees were creaking as I tried to wrestle my way up this wall of road. I was at my limit just trying to keep the bike moving and eventually I couldn’t. I unclipped just before I was about to topple over, defeated by the climb.

Last time I visited Lorne I resigned myself to the fact Francis St was simply too steep to climb by road bike. This time around, with nothing to lose, I managed to drag myself up it, somehow. At its steepest the gradient reaches 32%; at the top the views are impressive. If you're in Lorne and looking for a challenge, give this a shot.

On Saturday, on a whim, I decided to give it another shot, not thinking for a second that I’d be able to get up it. But somehow I did. It definitely wasn’t easy — it’s almost certainly the steepest bit of tarmac I’ve dragged by bike up — but it would seem that it is doable. And in case you were wondering, I was running a compact chainset (34-tooth) with an 11-28 cassette.

Thanks very much for reading. If you took part in Amy’s Gran Fondo over the weekend I’d be interested to hear your story from the day. Did you also get sucked into pushing yourself in the opening kilometres, only to pay for it later? Or did you have an entirely different experience? Leave your thoughts in the comments below.

Until next time, ride safe!