Last week my partner Sharon and I had some time off work so we decided to head down the Great Ocean Road and go camping in the small town of Marengo, just west of Apollo Bay. We camped for four nights in a nice little caravan park there on the water and enjoyed the best part of a week doing very little.

In amongst the relaxing I also managed to get out for a couple of rides through which I was able to gain a new appreciation for a region I thought I knew reasonably well.

When riding in a new location my first port of call is usually Strava’s Routes page. I pull up the map, see what the most popular segments in the area are, and work out a way of stringing a few segments (normally climbs) together. But looking at the map near Apollo Bay I could see a full ride that had already been put together: The Otway Loop.

I set off at 9.30am on the Monday morning (as a stack of families cleared out of the caravan park and headed home after the long weekend) and headed east towards Skenes Creek. I didn’t want to bury myself on the 9.2km climb, but I did want to maintain a solid tempo to take a decent average speed into the next part of the ride.

I’d seen that the rider with the KOM for the whole loop Strava segment had averaged roughly 28km/h on the ride and while I wasn’t expecting to beat that, I did want to give myself a chance of going close if I felt good later in the ride.

I tapped out a steady tempo as I made my way up one of my favourite climbs in Victoria. In less than 10km you go from the ocean, through farmland, past some amazing coastal views and up into lush rainforest, all while climbing at a steady and manageable gradient.

I enjoyed the views as I went and took note of my average speed as I crested the climb: a touch over 20km/h. I had some work to do if I wanted to be within reach of the KOM later on.

After a few kilometres of gentle descending I turned left on to Turtons Track, a road I’d heard many cyclists rave about but never had the chance to ride. Let’s just say the hype is justified.

From the turn-off you descend through lush rainforest for about 5km on a narrow, winding road before the road heads up and you’re climbing through similar terrain for about the same distance. There’s a 10-15km stretch there in which you’re deep in State Forest and it’s nothing short of spectacular. I had the opportunity to ride it on a weekday which, I’m told, is the way to do it. It can get quite busy on the weekends apparently.

Having been energised by the stunning surrounds I was able to power up the gentle climb and out the other side of the State Forest towards Beech Forest.

The road from the small town of Beech Forest through to Lavers Hill doesn’t appear too challenging when you look at the profile, and it’s not really, but it is very lumpy with barely any flat road to speak of. If I wasn’t descending I was pushing over short rollers, trying to keep my speed up.

There’s nothing wrong with that section of road, in fact it’s quite nice with views off to the right as you head west, but in comparison with the Skenes Creek Road climb and Turtons Track it feels a bit ordinary. I was looking forward to reaching Lavers Hill where I would turn left on to the Great Ocean Road and enjoy a long descent back to sea level.

I’d set up my Garmin so I could see my current elevation at a glance, which allowed me to work out how much descent I was ‘owed’ while on the ‘top’ section of the route, and how much elevation I would lose while descending before the road ran out.

The descent from Lavers Hill towards the coast was fast and free-flowing for the most part. As I descended I wondered whether tourists to the area might be slightly disappointed by the fact that a fair chunk of the Great Ocean Road isn’t actually near the ocean at all. I know I was disappointed when, after descending from Lavers Hill to Glenaire, Bass Strait appeared ahead of me briefly … and promptly disappeared as the road bent left and headed inland for the next 30km (see image below). 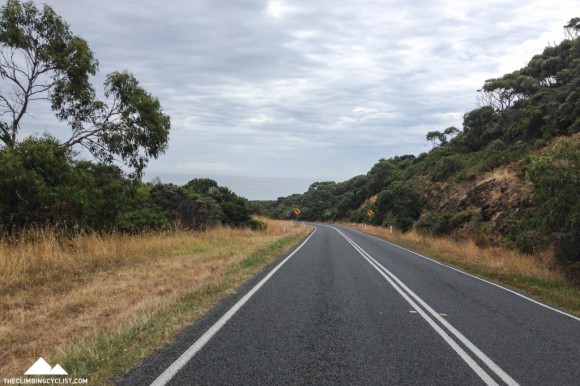 The long descent from Lavers Hill had meant I reached sea level with an average speed of more than 27km/h — faster than I was expecting. Better still, I was feeling good and felt confident of maintaining that to the finish. Or at least to the final climb which I knew was coming, but I didn’t know where, how long or how steep it was.

Looking at the ride profile now I can see that the final climb was most of 10km uphill. Only about 2km of that was at a consistent grade — roughly 8% if Strava is accurate — and after that it was generally uphill in a series of ramps. Uphill for a bit, then flat, then uphill again, then the briefest of descents, then uphill again. And so on.

I’d pushed through the flat section in the approach to the climb and had hit the climb with an average of more than 27km/h. So with the finish roughly 20km away I figured I might as well push on. I hit the climb pretty hard, powering up the first section and then using the rolling climb beyond to my advantage. I pushed hard on the uphill, took a brief rest as the road flattened out, and repeated the process as the kilometres ticked away.

I powered into town, keen to see if I could take the loop KOM. In the end I think I was very close. I say “I think” because Strava doesn’t seem to have matched my ride with the segment. I’ll see if I can do something about that.

Either way, it doesn’t really matter. I had pushed myself to ride faster than I normally would — I’d normally average about 25km/h on a ride like that — and I’d succeeded. More importantly, I’d ridden some great new roads for the first time and had a great time in doing so.

UPDATE: The good folks at Strava got back to me impressively quickly and said they were able to match up my ride with the Otway Loop segment. I was right when I said I thought it was very close — I took out the KOM by just three seconds, over a 3 hour 40 minute ride! I expect I’ll lose the top spot soon but for posterity’s sake, here’s proof that I did hold it at one point.

You can check out my Strava file from the ride here.

The next day Sharon and I headed out to check out the Barham River Road which runs inland from the ocean into lush rainforest. There are several sections of the road that are unsealed but they are totally manageable on a road bike with 23mm tyres … and totally worth it.

The road snakes its way through the valley with the creek nearby for most of the journey. There was almost no traffic on the road, partly due, I’m sure, to the fact it was a weekday. The road ends at Marriners Falls but the falls were closed when we were there so there was even less traffic than there might have been. 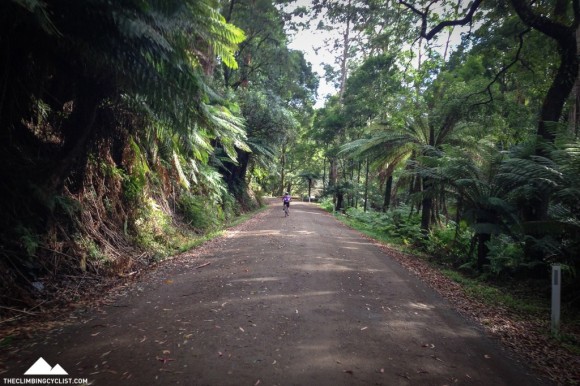 The ride was very pleasant overall, apart from some strong winds on the exposed section between the ocean and the forest and some roadworks which left one section of the unsealed rode soft and sticky.

We finished the ride with a quick spin up the first part of the Marriners Lookout climb (more on that in a sec) before heading into Apollo Bay for lunch. Lovely.

You can check out my Strava file from the ride here.

The afternoon after Sharon’s and my ride I headed out alone to check out some of the climbs in the area that I’d heard about but never tried. First on the list was Marriners Lookout Road, which Sharon and I had briefly visited before lunch.

The climb from the Great Ocean Road to the top of the climb is only 1.6km but in that time it climbs 176m. That’s an average gradient of 11%. Worse, the middle section of the climb holds steady at 15% or so for several hundred metres, making you work very hard just to keep moving forward.

I don’t want to say too much about the climb here as I’ve got a climb guide planned for it, but let’s just say it’s steep, painful and very challenging. One thing worth noting if you’re going to attempt the climb, thinking that there are great views at the top: there aren’t. It’s a roughly 10 minute walk from the top of the sealed road to the actual lookout.

After descending the precariously steep Marriners Lookout road, I turned left on to the Great Ocean Road and headed for Wild Dog Creek Road. This was another of those climbs I’d heard about, but never had the chance to experience. I’m glad I got the chance this time around. In fact, I’d probably rate this as among the most amazing climbs I’ve seen in recent times.

It starts off easily enough as you wind up through the valley, rock walls on the right. And then you take a turn on to Busty Road and from there things get noticeably steeper. They also get noticeably more awesome with one particular section in which the road doubles back on itself, all out on the ridgeline, all with amazing views down to the coast and into Apollo Bay (see image below).

It keeps reminding me of the Col de la Madone just near Monaco which I was lucky enough to climb three times during my Tour de France trip last year. The way you can see back down where you came, and over to the ocean is very reminiscent of that famous French climb, at least to me.

The top section of the Wild Dog Creek/Busty Road climb is actually pretty tough, with some nasty ramps to contend with but the views are sensational and its hard not to enjoy yourself. Again, I don’t want to write too much about it as I’ve got a climb guide in the works. Stay posted for that.

While there’s something comforting and convenient about riding familiar roads, few things can match that feeling of exploring new roads and new climbs for the first time. I’ve had the opportunity to do a bit of exploring in recent months and these rides have ranked among my favourite in recent memory.

Checking out new roads near Apollo Bay was particularly satisfying. It’s an area I thought I knew reasonably well but the number of new roads I was able to see in just a few days made me reconsider that assessment. I’ll definitely be back soon to explore further.

18 Replies to “Exploring Apollo Bay and surrounds by bike”