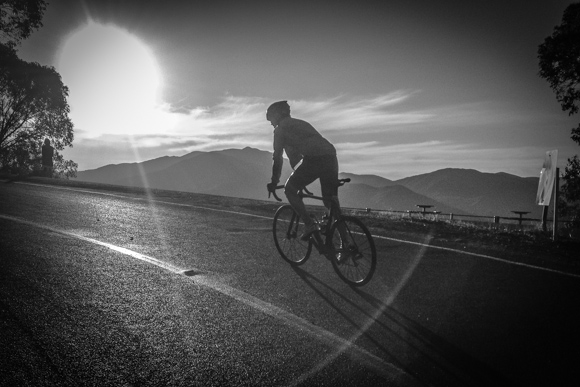 For the past four years Bicycle Network’s 3 Peaks Challenge has been the focal point of my cycling year. But this year a niggling knee injury stopped me from doing enough training and, ultimately, taking part in the event. But my brother Brendan de Neef was able to take my place and he wrote this report about attempting to finish his third 3 Peaks Challenge.

If I had to describe my 3 Peaks 2014 experience in a few words I would choose: “under-trained” and “over-ambitious”.

Three weeks ago, when my brother Matt gave me the tap on the shoulder, passing on his entry, I was feeling pretty confident. After all I had been consistent with my riding, commuting to my new job, getting out for a decent roll most weekends. I had not, however, been putting in the huge k’s, the 150km+ rides that really prepare you mentally and physically for a ride such as 3 Peaks. But all this was irrelevant, as I was entered and locked in.

My partner Anneka and I had secured some accommodation in Mt. Beauty at the last minute — we had tried to find somewhere to stay at Falls Creek but everything was fully booked. This was the first year that visitation to Falls Creek for 3 Peaks has been on par with winter visitation, a huge milestone in my opinion and a great testament to the value the cycling community brings to the alpine region.

My Saturday 3 Peaks preparation consisted of the following: the long drive up from Melbourne to Mt. Beauty, a drive up and down Falls Creek for the rider briefing/freebie collection/valet drop, a huge pasta meal and then early to bed.

As this was the fifth year in a row I had been up in the high country for 3 Peaks, I considered myself an old hand at preparing for this event. I opted for one item for the valet service — a pack of salted peanuts destined for the rest stop before the final climb. I’d learned from previous experience just how sick of sweet foods/gels/bars you become after a long day on the bike, and peanuts seemed like the most delicious way to get a dose of something more savoury.

As I lined up on Sunday morning, listening to the pump-up music, chatting to Rohan and Nicole — both entering their first 3 Peaks at late notice — it suddenly became real. Like it or not, I was in for a day of pain. The descent down Falls, usually fast and fun, was made less so by 1,900 riders around me, and my stupid Garmin.

The auto-starting and -stopping and throwing up of random numbers was distressing me more than it should have. I was so concerned with getting it going again that I had to force myself to leave it alone on the descent. I did keep thinking though, “what’s the point if I can’t put it on Strava?!”

Tawonga Gap came up quickly. A quick sensor adjustment had rectified my Garmin issues (for a while) and I concentrated on being consistent on the climb, tapping out a steady pace. Before I knew it I was at the top with a handy two-minute PB and sub-30-minute-time. 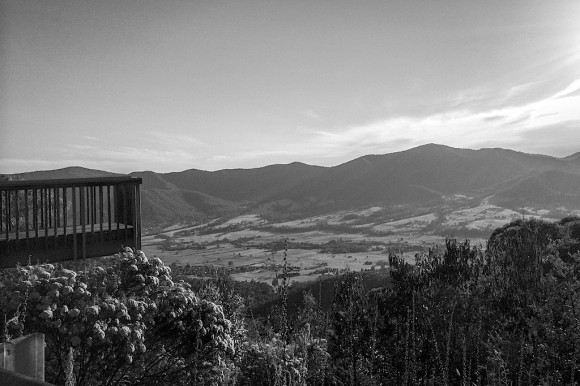 The section from the top of Tawonga to Harrietville was particularly fast. Using as much of the road as I was allowed on the descent I caught a swift bunch who were tapping out a respectable pace. Two of them were wearing some of the most distinctive kit out there, dressed as what I would describe as a leopard and a zebra. The guys from Attaquer sure know how to make distinctive looking clothing.

Along the road to Harrietville the bunch picked up big clumps of riders, to the point where there were about 50 of us rolling turns, all the way through to the start of the Mt. Hotham climb.

Hotham felt hard; a lot harder than I would have liked. I guess I was fatigued, or hungry, or something. The false-flat couldn’t come quick enough, the ramps seemed to last forever and at every blind corner I was sure the climb was about to end.

The struggle was made worse by an annoying crunching sound coming from my bike’s headset (I was 99% sure I fixed that the day before!!) Whatever it was that made the climb so hard, it certainly felt good when, 1:54 after leaving Harrietville, I reached the top. I decided I would take a selfie, tried to put on a smile, but the end result is that I just look ruined. 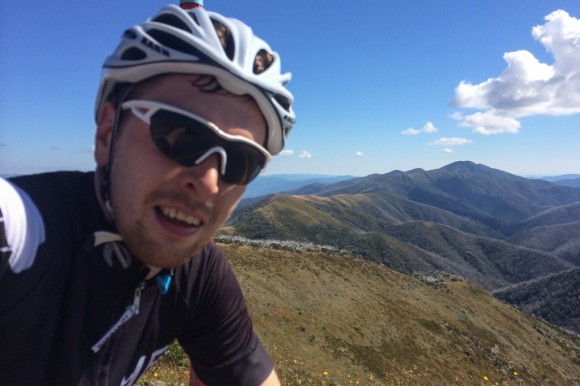 I spent the 10-15km stretch from Hotham to lunch at Dinner Plain dreaming of the roast vegetable wrap I knew was waiting. It didn’t disappoint — I slammed it down, filled my bottles and hit the road, with visions of a sub-10-hour time in mind. I had left the lunch spot just after 11:45am, and at this stage sub-10 still felt achievable.

One of the burdens of riding in my Hells 500 kit on the day was constantly being compared to some of the riders who had managed epic feats just a week before in their quest to ‘Everest’ a particular climb. My favourite lines were “Hells 500? This should be a walk in the park for you!” and, as I was sitting on someone’s wheel, “Hells 500 riders don’t sit on wheels — get in the wind!”.

A special mention goes out to Nathan Carter, Andy Van Bergen and anyone else who participated in the epic who chose to use 3 Peaks as an ‘active recovery’ ride. I came across Nathan between Dinner Plain and Omeo at which point he was battling low energy levels (understandably). We passed and got passed by each other all the way to the Back of Falls climb.

The mostly downhill section to Omeo went quickly. Having got a second lease of life I really enjoyed the final super-fast descent into Omeo and the fruit scone waiting at the rest stop. However fast it felt, I was still about 10 minutes behind where I wanted to be and for the first time I began to think sub-10 was out of reach.

I just plodded along from Omeo to the back of Falls Creek climb. There really isn’t any other way of describing it. Sure, there is some amazing scenery on the road — it truly is one of the best roads around — but it was appalling riding on my behalf. I rode by myself for most of that section; I felt flat and faint, and my Garmin was reading a completely wrong speed and was becoming increasingly irrelevant and frustrating. I had all but given up on my sub-10-hour time and it was probably the low point of the ride for me.

A quick break at Anglers Rest saw my delicious salted peanuts pep me up a little, but I can genuinely say I was happy when I got to WTF Corner and started the Back of Falls climb. I had done this climb a few times before and wasn’t so scared of it anymore, plus I knew that once it was done, I had ticked off 3 Peaks for 2014.

The climb was slow going. I had given up on my Garmin for speed and for telling distance. I kept the elevation on the screen and told myself I just had to get up to “around 1600m”. Every pedal stroke made my headset creak and groan and I just concentrated on staying in the saddle and tapping it out. I was no longer concerned by my time and was just focused on getting across the line.

A big shoutout goes to Andy Van Bergen, of Hells 500 fame, who spent his Saturday pinning signs all the way up the climb. They were a great distraction and something to force a smile and I’m sure they were appreciated by many. 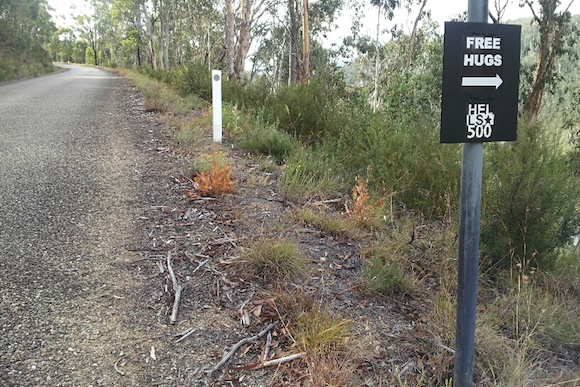 Trapyard Gap came and went. It threatened to rain, but it didn’t. The climb kept coming and eventually the lake came into sight. I can honestly say that is one of the best things about 3 Peaks — cresting the final climb, seeing the lake and knowing that you’ve come such a long way, with so little to go.

I crossed the line in just over 10 ½ hours and finished what would be my third 3 Peaks Challenge in a row. There wasn’t the same battle with the elements of 3 Peaks gone by — in fact the weather was near perfect all day — but that route doesn’t need additional challenges. It’s challenging enough and is not to be taken lightly.

Special thanks to Anthea Hargreaves from Bicycle Network for organising my entry and allowing me to ride as Matt for the day. And thanks too to Anneka for putting up with another trip to the high country.

Did you ride the 3 Peaks Challenge this year? How did your day unfold? We’d love to read your comments below.

You can check out Brendan’s ride on Strava here. Images in this post appear courtesy of Brendan de Neef, Aaron Keefe and Andy van Bergen. If you’ve got a climbing-related story you’d like to share, please get in touch with Matt via email.