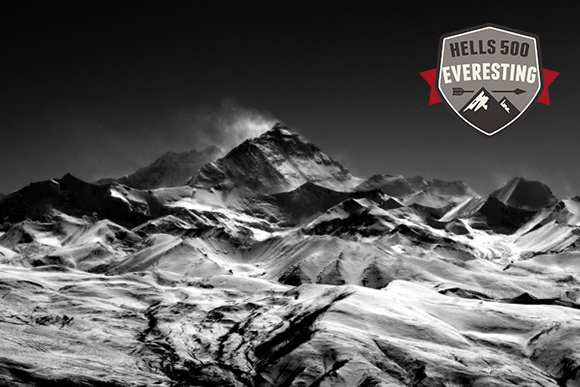 It’s been nearly a year since the last Hells 500 epic, Crux and this year’s instalment lands this weekend. It’s called Everesting and it’s almost certainly the hardest Hells 500 epic yet.

Unlike previous editions of the epic, this year’s ride is a solo endeavour, with riders spread across Australia and beyond. The premise is reasonably simple: climb the equivalent of sea level to the summit of Mt. Everest (8,848m) in one ride, simply by doing repeats of a single hill.

Every rider must do a different climb because, in the spirit of the great mountaineers, the true glory belongs to the rider who becomes the first to “everest” a climb. That’s right, “to everest” is now a verb.

The 2014 Hells 500 epic was inspired by the efforts of George Mallory (himself the grandson of the legendary mountaineer of the same name) back in 1995 who rode Mt. Donna Buang an incredible eight times to complete the first Everest by bike most of us had ever heard of. You can read George’s terrific story of that ride here.

And then there was John van Seters, uncle of Hells 500 founder Andy van Bergen, who everested the 1 in 20 , notching up a lazy 9,110m of climbing in 430km. JVS’s mammoth ride was the catalyst behind Everesting as a concept and its berth as the next Hells 500 epic.

So this weekend, more than 50 hardened (and arguably foolish) souls will take to the hills to become the first to everest their climb of choice. Some riders are doing the epic mountains we’ve all come to know and love — Mt. Hotham, Mt. Buffalo and so on — others are taking on mere bumps in the landscape, including suburban streets.

Me? I’m not fit (or foolish) enough to take on this challenge at this point, but I’ll be watching with interest as dozens of riders try to create a spot for themselves in recreational cycling folklore. You can check on the riders’ progress too by following the #everesting hashtag on Twitter and Instagram. I’ll catch up with some of the riders after their attempt and report back here.

Good luck to everyone that’s taking on their own private Everest this weekend and to everyone else, check out the snazzy new Everesting website, which includes a Hall of Fame listing riders that have already everested a climb (or three).