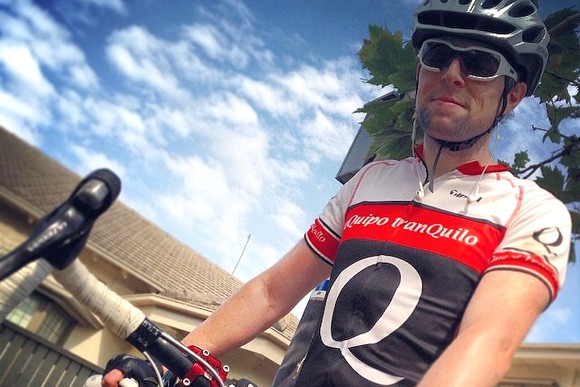 Back in early March a whole host of riders headed out to various parts of Australia and beyond, to attempt to ‘Everest’ a climb of their choice. That’s 8,848 vertical metres in one ride. Solo. The Everesting hall of fame now lists a total of 46 successful Everestings and there are some truly amazing stories to have come out of those rides.

The most recent Everest ride was completed on the weekend when Paul Dalgarno, the rider formerly known as the Donvale Demon, took on the popular but challenging Yarra Street climb in Melbourne’s inner suburbs for his second Everest. Here’s his report from the ride.

Only two souls other than myself had any inkling I was going to try Everesting Yarra Street, and none, myself included, with any certainty. My wife knew, just after me, on Tuesday of last week — when it was still in the realm of maybe. Andy van Bergen of Hells 500 knew on the Tuesday too because I’d mentioned it, as hypothetically as possible, in an email, before sloping back into radio silence.

Situated just off Kew Boulevard, Melbourne’s failsafe training ground for recreational cyclists, Yarra Street will be familiar to many: a gentle ramp, followed by a gradient in the mid-teens, then a 20% punch in the balls, a flattish roundabout, and a recovery stretch at about 11%. At 500 metres with 50 metres vertical gain it’s over quickly, or that’s the theory.

Even when it looked to be happening for sure – on Friday morning – I didn’t tell anyone. I’m not a mountain goat; steep gradients are things I get through, eventually, and rarely gracefully. Mainly I didn’t want to be on record as saying I was about to crank out 160 repeats of the tiny-but-mighty Yarra Street, only to let everyone know I’d managed only three before bursting into tears.

So why even try it? I’m not quite sure.

I started at 4.30am, which had some consolations. There were no cars, for a start; and it was dark, which meant peeing in the trees was easy. During my first Everesting attempt a few weeks ago – at Reefton Spur – the call of nature was a wondrous thing: just me, some trees, the occasional wallaby. On a heavily populated urban street with well-to-do residents tending their lawns – the stakes were higher. I’ll spare you the mechanics but there’s a bidon I won’t be using again.

The first 80-something laps were done in isolation, except for a few other riders who were either doing solo anaerobic efforts or a few lazy (I’m joking) repeats with no concern for me.

My wife turned up on her bike, badly hung-over, after getting lost, only to pass on a flask of coffee before riding off again, nauseated, to pick up our kids.

He’d come purely on the off-chance I’d gone through with the half-suggested attempt.

Apart from looking genuinely pumped with my efforts to that point, which in itself gave me an adrenaline boost, he asked if I’d mind him putting news of the attempt up on Facebook.

I didn’t – and within an hour the complexion of the ride changed completely. For the next few hours barely a lap went by in which someone wasn’t riding with me; and, as if it was orchestrated, when that rider left another would turn up to do some. When Scott (sorry, didn’t catch your last name) peeled off, Will Halpin arrived and knocked out a few, setting a nice rhythm and transmitting positive calm. When Will left, Thomas Price arrived, and so on …

Having a wheel to follow, a person to talk or say nothing to, made a massive difference – instead of the endless Garmin-watching and failed attempts to break free of Garmin-watching, there was another body, on another bike, showing solidarity.

And not just people on bikes. Six or seven cars passed throughout the afternoon, with drivers and passengers I’d never seen before winding down their windows and shouting “keep it going, Paul”, or similar.

Such is the joy of maths and Everesting. In a way, you need the numbers, to plan. With Reefton, I knew I needed to do 26 reps of a six-kilometre stretch of road at 6% and that – averaging 45 minutes for each return trip – it would take about 18 hours to ride. And yes, that was pretty accurate. But then there were the breaks. A food-stop here; a selfie there. Individually, these always felt short, but multiplied by 26 they blew my completion time out by a further four hours.

I’d started that ride at 1.30am to avoid having to finish off in the dark, but by 8pm I still had five laps to do, and less than an hour and a half in my front light’s battery pack. Descending the spur without lights would have been impossible, and challenge over, so I resolved to do the ascents with no front light, to save juice, then plug it back in again at the top for the descents. On the road going up I saw white stripes, then grey stripes, then blackness. Riding up a steep hill in zero visibility after 20 hours of exertion and no company or phone signal is … not much fun.

I was hugely grateful to my parents in law, who drove out to find me at 10.30pm. With my light about to go, they followed me down on the last Reefton descent and then followed me, driving their car and mine, at a snail’s pace, lights blazing, while I did the final ascent.

The maths on Yarra Street were also problematic. I knew I needed to do around 160 laps of a 500-metre stretch of road at 10% and that – averaging four or five minutes a pop – it would take me about 13 hours of ride time. But ticking off those laps mentally from one to 160 or 160 to one would have been counter-productive. I couldn’t imagine getting a lift from thinking, “Only 78 to go …”.

Luckily for me, towards the end of the 6,000s on Yarra Street, eQuipo tranQuilo captain Matt Fletcher arrived, packing a smile, as did Raymond Lam, whom I hadn’t ridden with before. They rode a solid 20-or-more laps, taking my mind off of anything other than following their wheels.

Just as they were finishing, Shane Miller – a man known to everyone for his cycling achievements, including his record of 100 repeats of Yarra Street – arrived to shepherd me through the last 15 laps; followed minutes later by Col Bell of Hells 500.

Not just the quality but the spontaneity of the support throughout the day was amazing – and one of the most unexpectedly life-affirming experiences I’ve had.

Equally life-affirming was the Yarra Street resident who cheered me on each time I passed for nearly all of the last 20 laps.

She went inside when the sun went down, but not before leaving a four-pack of Coronas in her garden for us to take.

Wisely deciding that riding back down the hill for them would be awful, Shane – without unclipping – grabbed the beers on passing for the last time and rode the final 250 metres of the climb one-handed.

You can check out Paul’s Strava file from the ride here. This is an expanded version of a ride description Paul left on his Strava file after completing the ride.

If you’ve got a climbing-related story you’d like to share, get in touch with Matt via email. Feature image appears courtesy of Andy van Bergen.