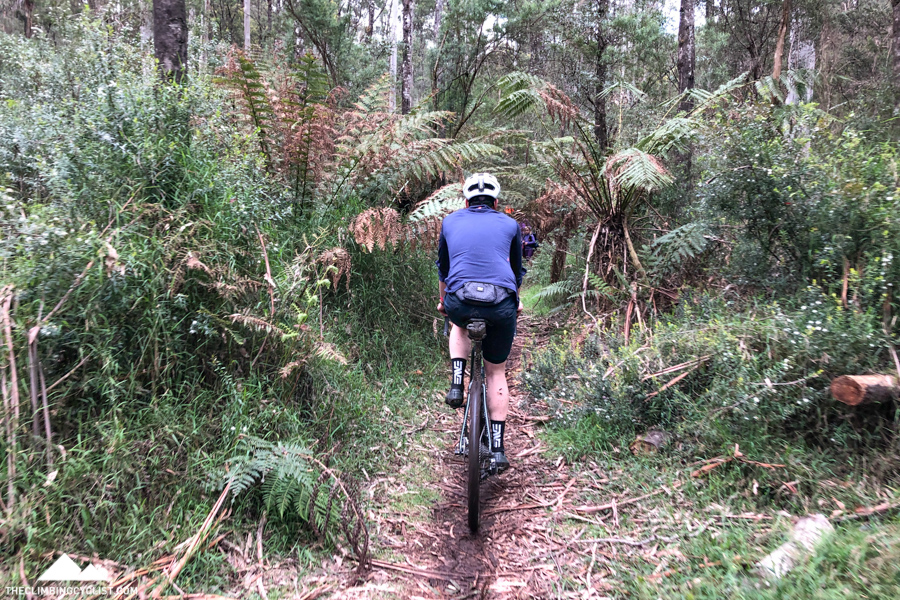 What do you get when you combine 80’s hair metal, a sleepy town in the Yarra Valley near Melbourne, bikes of all different kinds, a whole variety of road and trail surfaces, and 500 cyclists ready for a good time? You get Hells 500’s 2019 Ol’ Dirty, of course — the ninth edition of Australia’s biggest and best gravel grind.

I’m in something of a privileged position when it comes to Ol’ Dirty. My friend and colleague Andy van Bergen runs the event so in the months leading up to the ride I get to hear about how it’s all progressing, what he’s been organising, and what everyone can expect on the day. Even with that insder knowledge, I’m always surprised and impressed when I turn up and see how it’s all come together.

I love wandering around the start village and taking it all in. I love seeing how Andy, his wife Tammy, and their team have executed their vision, and how stoked everyone is to be there.

Last Sunday, I was able to tell how excited people were even before I’d reached the event village. Getting out of my car I could see a multitude of people in ’80s-style outfits — long wigs, leopard print and snake skin tights, fake guitars slung over shoulders. The lot.

It was the most engaged I’ve seen an Ol’ Dirty crew get with the ride’s theme. And there have been some pretty sweet themes along the way.

In 2014 (the first year the event was known as Ol’ Dirty), the ride was themed around 90s hip-hop (a nod to rapper Ol’ Dirty Bastard). In 2015, there was a US baseball vibe. The 2016 edition was something of a nod to Miami Vice. In 2017 it was a carnival theme, and last year was the much-celebrated boot camp edition.

The centrepiece of this year’s 80s theme was cover band Powerstryde who played a banging set before the ride began. Riding from the car to event village it was hard not to smile as familiar Bon Jovi and Van Halen tunes rang out over the town of Warburton. There are worse ways to start the morning.

Wandering around the start village I couldn’t help but notice the variety of both bikes and clothing on display. MTBs, gravel bikes, cyclocross bikes; full lycra, baggies, flannelette shirts, dress-ups — this was a true melting pot of various cycling sub-cultures, all coming together for one great event.

After Powerstryde’s set ended, Andy got up on stage and said a few quick thank-yous, capped off with a well-received “Let’s ride some bikes!” And with that, we were off.

There was a bit of a traffic jam at the start as 500 eager cyclists tried to filter their way across a one-metre-wide bridge over the Yarra River. But before too long we were off and making our way to the first challenge of the day: Surrey Rd.

Judging by the responses of those around me, more than a few people were caught unawares by this steep climb. It’s hard enough when you’re climbing on the tarmac section, but then you swing around to the left and get onto the gravel and things get super nasty.

Thankfully, I didn’t just know the climb was coming, I’d ridden the climb a bunch of times before and even included it in two editions of the Melbourne Dirty Dozen in 2015 and 2016. I set myself the challenge of getting to the top without stopping … which is harder than it sounds when you’re riding at 15%+ on gravel and people are walking in front of you on both sides of the narrow road.

I got through the sea of people without putting a foot down, and then it was onto the beautiful O’Shannassy Aqueduct Trail.

I’d ridden this trail a bunch of times before, too, not least at Ol’ Dirty and its precursor event, Donna Done Dirty. Every time I ride the aqueduct, though, I’m still blown away by how stunning it is.

Perched a little ways up the slopes of Mt. Donna Buang, the trail winds its way gently out to the east and then north east, surrounded the whole time by lush, temperate rainforest. Regardless of the time of year, the surface always seems to be a little soft, and fallen bark and branches often litter the path. It’s become something of a derailleur graveyard in recent years (apparently 20 people suffered broken derailleurs on Sunday) but I’ve never been so unlucky (touch wood).

After a few kilometres on the aqueduct trail, the bunch started to stretch out and fragment as riders found their own comfortable speed. Before too long I was riding on my own, and I was fine with that.

A big part of what makes Ol’ Dirty special is the scale of it — it’s a huge party with heaps of similarly minded folk, many of which I know. But I also enjoy the quiet moments; being able to tap away and appreciate the simple act of riding a bike in some truly magical scenery.

Despite having ridden the aqueduct trail a bunch of times, I’d never ridden it all the way to the end. All up, we spent 20 kilometres ducking and weaving amongst giant gums and ferns, eventually reaching the beautiful O’Shannassy Weir.

A brief stop for photos later and I was off, back down into the valley, and heading to the lunch stop.

Normally at Ol’ Dirty there’s a bit of a wait for lunch — understandable when you’ve got 500 hungry riders and just a couple catering staff on hand. On Sunday, though, I didn’t have to wait at all. I simply walked up, grabbed a bowl of tasty paella, and started eating straight away. Very impressive.

My friend and colleague Iain Treloar rolled in just after I’d started eating, and it was great to see him. I’d enjoyed my solitary time so far but I was looking forward to riding with him for the rest of the day.

Once we were both fed and watered, and after we’d said hi to a bunch of people we knew, we were off and into the second half of the ride. A few kilometres on Woods Point Rd quickly flew by and then we were turning left and back into the bush.

I don’t remember much of this section, to be honest — good conversation with Iain made the kilometres evaporate in no time. I do remember that we ran into Andy White of Fyxo / Melburn Roobaix fame along the way. When I asked how he was doing, he responded with an enthusiastic “I’m riding bikes in the bush – two of my favourite things!” I knew exactly how he felt.

Strava tells me we climbed for a bit during this section of the ride, then descended to Big Pats Creek, taking in some single-track along the way. That single-track section was great — a beautiful narrow path winding its way through thick bush, with the occasional creek crossing thrown in for good measure.

And then the ‘fun’ began.

I’d heard Andy mention Burns Track a few times in the lead-up to the event, mainly because of the rough aggregate rock that had been dumped on the road in the weeks before the ride. As he noted, it was a tough few kilometres of climbing spent trying to navigate big stones, but thankfully there was a clean line around the worst of it, most of the time. Having a MTB certainly helped — those on skinnier tyres wouldn’t have had as much fun.

The rocky section ended after a few kilometres but the climb certainly didn’t. I knew we were in for a decent ascent but I wasn’t expecting exactly how long and hard it would be. On many occasions I found myself thinking “this must be the top”, or “we must start descending soon”, but every time the climb just kept on going.

Looking back at the Strava file, I spent well over an hour slogging away, climbing up towards Mt. Bride. It wasn’t a super-steep ascent by any means, but it sure was relentless, and on wider tyres and with a heavy bike, progress was slow. The 17km run I’d done a day earlier certainly didn’t make things any easier.

I lost Iain at some point on the climb. I stopped for a nature break and thought that he’d passed me while I had my back to the road. So when I continued on, I pushed the pace to try and catch him … but he never appeared on the road ahead of me. I kept riding hard, sure that he’d been just behind me when I’d stopped.

The climb eventually ended and I decided to stop for a couple minutes to see if Iain was, in fact, behind me. After catching no sign of him, I figured that my initial assumption had been correct — he was ahead of me and currently bombing towards the finish.

I saddled up and began the wonderful descent back towards Warburton. Is there anything better on the bike that a descent you feel like you’ve truly earned? I let the bike run and enjoyed the feeling of wind in my face, and the chance to give my legs a rest.

When the gravel road turned to bitumen, I made the hard-right onto another stretch of single-track. Unfortunately, I think a few riders missed this section on the day — it’s rather hard to spot if you aren’t expecting it. Those that missed it certainly missed out.

Thankfully I’d ridden this section during the 2015 Ol’ Dirty, on a road bike no less, when riding the single-track was more like riding down a river. This time around I was on a more appropriate bike and able to really hit this section hard. I had a blast.

While it was much drier than it had been four years earlier, there were still some very muddy sections to contend with. By the time I got back to Warburton, stoked but exhausted, I was covered head to toe in mud.

Iain pulled into town a few minutes later — he’d never passed me after all. I apologised for losing him on the climb and we grabbed a quick bite at the bakery to refuel and look back over the day. Both of us had to leave pretty soon after, but it was nice to spend a few minutes reliving what was another excellent edition of Ol’ Dirty.

Every year I’m blown away by the scale of Ol’ Dirty and how much it’s grown since the early days. Those early editions, when it was known as Donna Done Dirty, were some of the most memorable rides I’ve done — unexpected soup kitchen near the top of Mt. Donna Buang, anyone? — but every year Andy and Tammy and their volunteers manage to put on a another remarkable event that brings the cycling community together in a unique and inspiring way.

That they’re able to do it at all, with two young kids keeping them busy, plus work, plus running Hells 500 and Everesting on the side, is a testament to how hard-working and passionate they both are.

So, thanks to Andy, Tammy and everyone that worked behind the scenes on Sunday to pull together another excellent Ol’ Dirty. As ever, your months of hard work paid off in spades. I can’t wait to see what you cook up next year!

Follow the link to see my Strava file from the 2019 Ol’ Dirty. Follow the links below to see reports from previous editions of Ol’ Dirty (previously known as Donna Done Dirty):