Melburn Roobaix is a true icon of Melbourne cycling, an event the unifies cyclists of all abilities in a way that no other event really does. The concept is simple: find your way between a handful of designated cobblestone sectors in Melbourne’s inner suburbs and have a lot of fun along the way.

Unlike the event which inspired its creation — Paris-Roubaix — Melburn Roobaix has no set route — you are free to get between cobbled sectors as you see fit — and it’s not a race. And, at seven years old, and with over 2,000 people registering for yesterday’s edition, there can be little doubting the popularity of the event.

Having heard how rough some of Melbourne’s cobbles are, I decided to leave the CAAD10 at home and take my old Trek 1.2 along. In fact, I went one step further, putting on the 25mm tyres I’d run the previous weekend at Around the Lake … and I’m certainly glad I did.

Brendan, the Donvale Demon and I met at Federation Square just before 9.30am and made our way over to the Hawthorn Velodrome for the start of the event. We met with Andy van Bergen and his crew at the ‘drome and queued up to get our registration musettes which included a map with all the cobbled sectors marked. There must have been 1,000 people there as we prepared to start the ride — people on carbon-frame road bikes, people on mountain bikes, people on unicycles and plenty of people riding single-speed bikes.

And it wasn’t just the variety of bikes that stood out. There were people wearing suits, people wearing sombreros, guys wearing outfits that left very little to the imagination, and people wearing mullet wigs, afro wigs and everything in between.

We didn’t have far to go before hitting the first cobblestone sector — a reasonably simple stretch that gave us a taste for what was to come. But even on this easy sector, and even with thicker tyres on, my back wheel slipped out a few times on this first sector which didn’t fill me with a huge amount of confidence.

At the second sector my back wheel slipped out again and at one point I found myself sliding toward a fence, my back wheel flicking out at right angles to the rest of the bike. I managed to regain control just before impact and, slightly shaken, decided that it might be easier to ride faster over the cobbles. After all, greater forward momentum equals less chance of lateral movement, right?

By the third sector I was starting to get the hang of riding the cobbles and I was actually starting to enjoy it. From then on I stuck to a simple formula: try to cover the cobbles as quickly as was safe with others around, avoid the gaps between stones that looked like they could swallow my wheel and, above all, stop the back wheel from sliding around.

As we made our way along Yarra Boulevard between sectors four and five we rode past the notoriously steep Yarra Street — an opportunity that a few of us couldn’t resist. We blasted down the short descent then up the steep ramp that must get to about 15% at its steepest. Being one of the few people in our group to be riding a bike with gears I was able to push up the hill with a reasonable cadence, rather than zig-zagging about at 40RPM. I reached the top of the climb ahead of the bunch and set a PB in the process — a worthwhile little diversion!

In fact that whole day was full of little diversions and distractions like that. In the early part of the day we took a detour through Boroondora Cemetery … just because we could. A later diversion took us through and around a carpark, again for no real reason.

By the time we’d completed seven sectors we were over halfway and I’d managed to stay upright throughout. Mind you, I came pretty close to coming unstuck a couple of times. On sector four or five another slip of the back wheel saw me fall ungracefully to the right. I managed to unclip a fraction of a second before it was too late and, shaken, I continued on sheepishly.

Once in Clifton Hill it was time for a pre-planned rest stop. We ducked into a local pub, had a few beverages, a chat about the day thus far and worked out where the next sector was.

After a snack from a nearby bakery it was back on the bike and into the longest transition of the day: from Clifton Hill out to Moonee Ponds via the Capital City Trail and the Moonee Ponds Creek Trail.

Riding along the concrete canal next to the Citylink Tollway, we reached a point where a drain was pouring some kind of slippery green gunk down the slightly angled concrete path into the nearby canal. I managed to get over the slick section without any problems but not everyone was so lucky. I heard a few people behind me hit the deck, hard, as their back wheels slipped out.

Andy was one such rider who, as well as tearing up a favourite pair of gloves, managed to bash his elbow quite hard. The adrenaline took away some of the pain but by the end of the day Andy was struggling and spent some time at the St. Johns’s ambulance post-ride getting checked over.

As we waited for Andy to pick himself up off the concrete, I stood by the slick patch and yelled out for approaching riders to be careful. Despite heeding my warning, clipping out of his pedals and slowing down to an almost-crawl, one poor rider lost traction completely and went over, adding to the carnage. Maybe faster would have been better?

The eighth cobbled sector of the day was the Koppenberg, named after the infamous cobbled climb in the Ronde van Vlaanderen. With a sustained climb for a couple hundred metres, some really rough cobbles and lots of people to get around while climbing, it was probably the hardest sector of the day … all the more reason to do it twice!

After smashing through the first attempt a handful of us (including Andy, with pain still dulled by the adrenaline) went around the block and back up the Koppenberg, weaving and winding our way over the lumpy, inconsistent surface. I’m very tempted to head out there one day when there’s no-one around to get a sense of how fast you could ride it. The fact that it’s a Strava segment adds a little extra motivation.

With the Koppenberg out of the way there were only four sectors remaining. I was given navigation duties on the way to sector nine and planned out a route that would get us there. I lost the group after one corner with everyone (except the Demon) deciding to continue straight on rather than listening to my suggested route!

The Demon and I reached sector nine before the bunch and punched through the cobbles to wait for the others at the end. We rode the final three sectors as the bunch gradually thinned out and by the time we reached the Brunswick Velodrome to finish the event, it was more or less just Brendan, the Demon and I riding together.

In many ways, Melburn Roobaix is a melting pot of Melbourne cycling — a place where you’ll find roadies riding alongside unicyclists, hipsters riding next to mountain bikers. It’s a ride that’s all about cobblestones but, really, the cobblestones are only part of what makes the ride so worthwhile. It’s about the joy of riding with mates, the joy of finding your way around, of getting lost and, ultimately, it’s about having fun. On that score the day was a roaring success.

Thanks to Andy White at Fyxomatosis for putting together a truly memorable event. It was a very different cycling experience to what I’m used to but, perhaps, all the more valuable for that reason. I learnt that you don’t need a precise, turn-by-turn plan to have fun on the bike and that it’s OK to take nearly four hours of riding to cover less than 70km.

And just as the dirt of Around the Lake opened my eyes to a different cycling experience last week, the cobbles of Melburn Roobaix revealed another dimension to Victoria’s tremendous cycling scene. 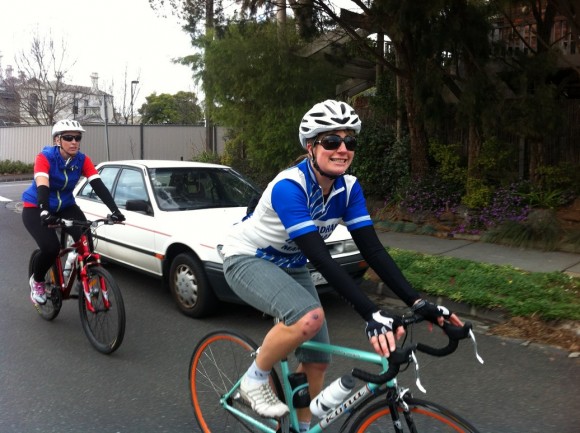 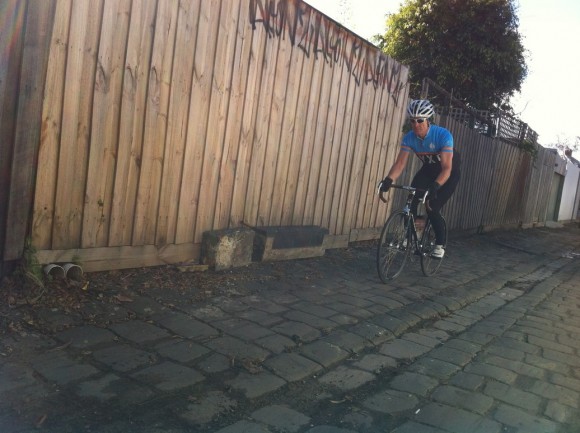