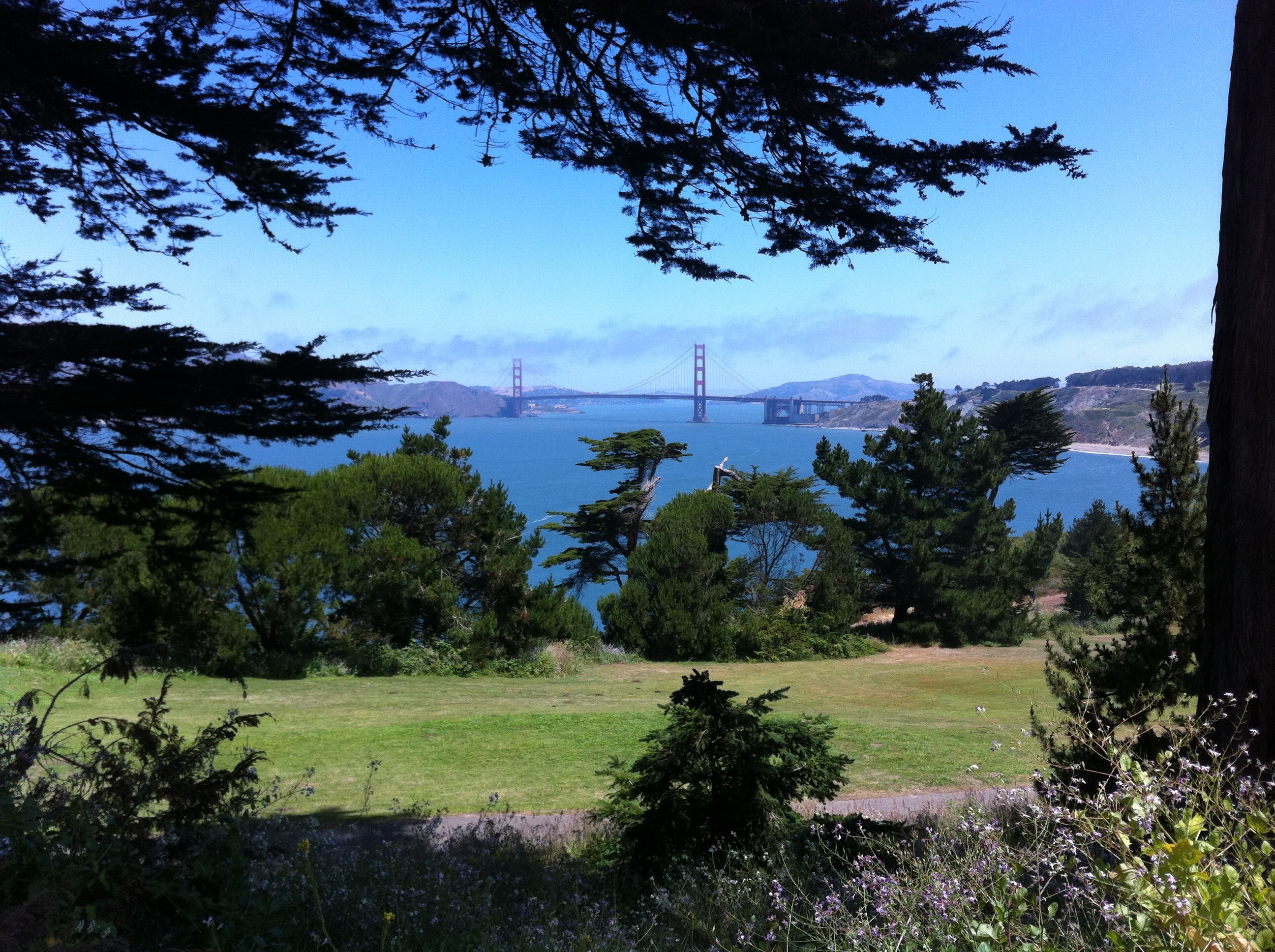 In 2008 my partner Sharon and I went on a nine-week holiday to Europe. Throughout the trip I ate a considerable amount of food and did virtually zero exercise. As a result, I managed to put on a sizeable 10kg by the time I got home.

My family were nice enough not to say anything when I waddled off the plane, my face noticeably pudgier, but the bike wasn’t so kind. I struggled like nobody’s business on the hills thereafter and had to work very hard to regain the fitness I’d traded in for french-fry pizzas in Venice and souvlakis in Athens.

And now that I’m in the mighty US of A, I’ve got a task ahead of me. In two days I’ve already had two of the most outrageously unhealthy meals imaginable and the fatty foreign food is proving alarmingly tempting.

When I left home I was 77kg and I’m very keen to be less than 80kg when I return. Reaching that goal will require an element of restraint on my behalf, but also a fair bit of exercise. 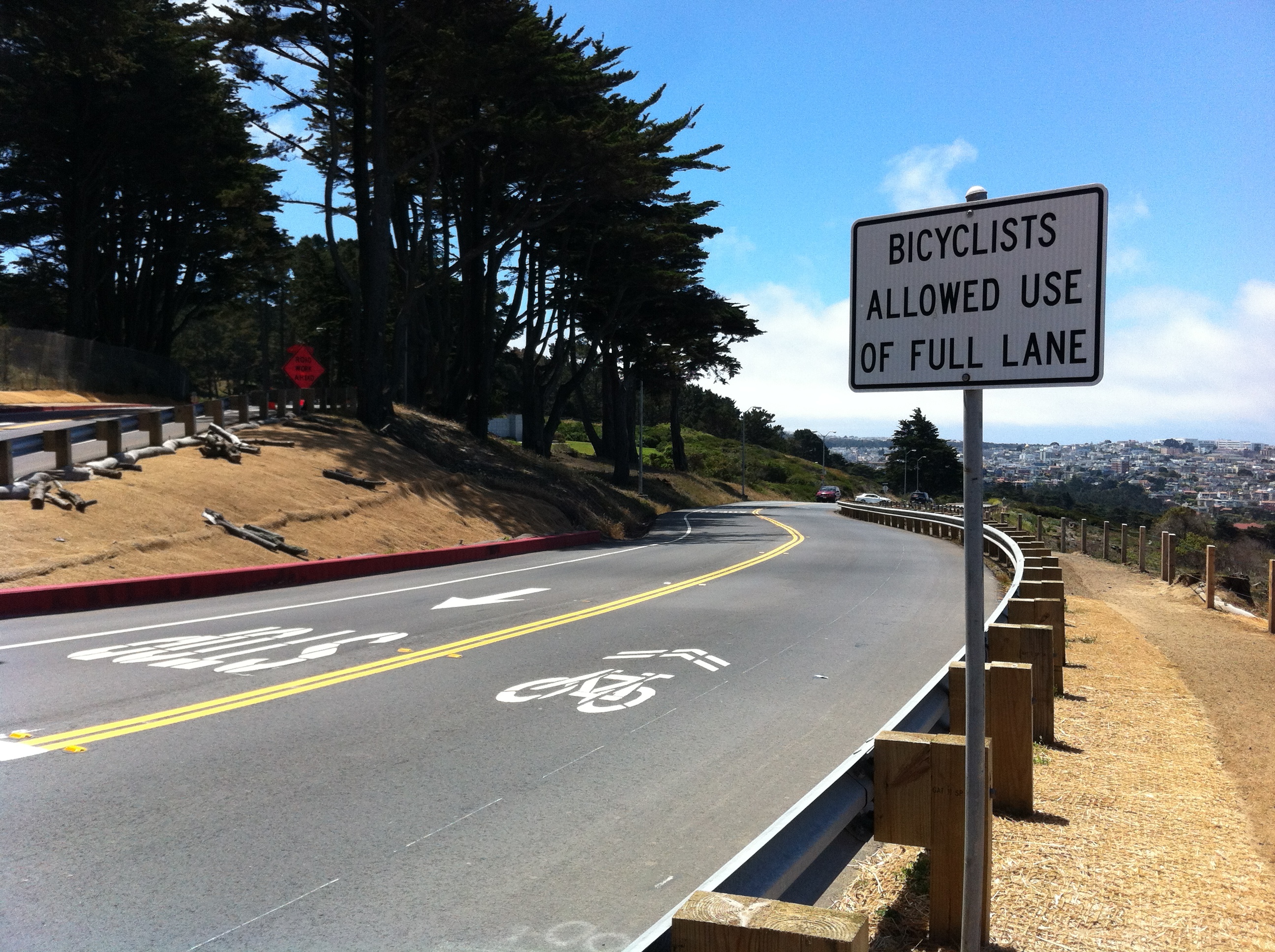 On day one, having had only 30 minutes sleep in the previous 30 hours, my brother Ash and I got off to a good start, walking 15km up, down and around the city. The streets here are ridiculously steep — a gradient of 15% is run-of-the-mill and I’ve seen at least half a dozen of 20%+. The steepest in the city, Filbert Street, is a lazy 31.5% which is pretty painful to run up, let me tell you.

After breakfast on day two Ash and I wandered up to the bike hire store a block from the hostel and grabbed some bikes for the day. They were advertised as ‘comfort bikes’ but I’m not convinced. Add to that some tyres that looked like they could have fit a motorbike and the fact they weighed in on the wrong side of 15kg. They certainly weren’t the most efficient machines around.

After leaving the hire place, our first challenge was negotiating downtown traffic, on the opposite side of the road to what we’re used to. It was a nerve-wracking start but after a few miles we got the hang of it and made our way west toward Golden Gate Park.

The ride though the middle of the park was absolute stunning and after a while it deposited us out at the Pacific Ocean where we took a right turn. Riding along the beach we came face-to-face with our first climb of the day. The road wound it’s way up toward Lands End at a gradient that normally wouldn’t bother me but with a bike that was almost as heavy as I was, it was slow going. 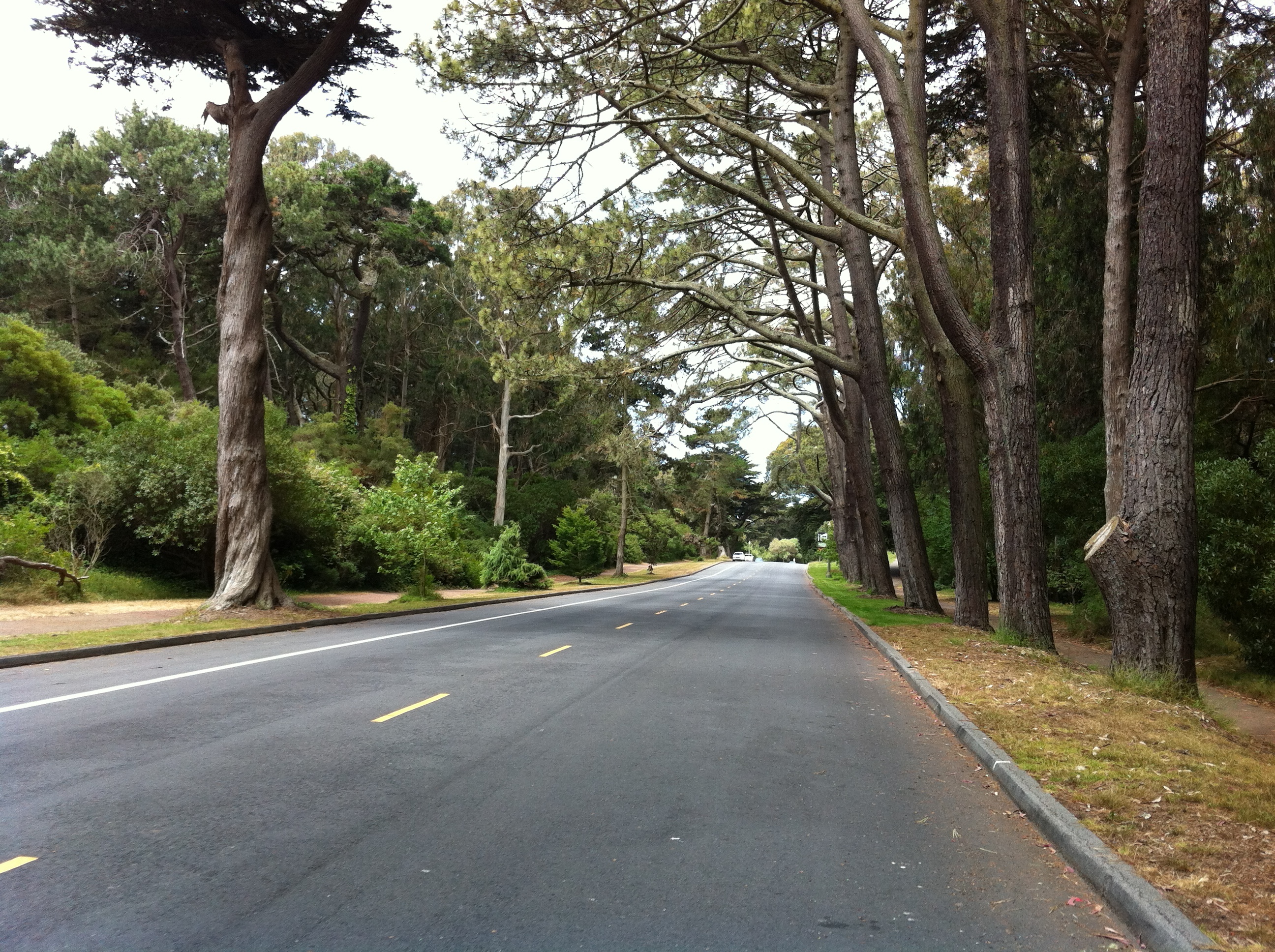 At the top of the hill we got our first glimpse of the Golden Gate Bridge. Our plan was to ride over the bridge and so we made our way in that direction, by any means we could. We found ourselves riding along narrow dirt paths, carrying our bikes up stairs, riding along the backstreets of very-expensive-looking neighbourhoods and, occasionally, riding along main roads.

In fact, we approached the whole ride in that way — we knew roughly where we wanted to go but for the most part, we just played in by ear. If a road looked interesting or if there was something we wanted to take a photo of, we just did it. It was a nice, organic way to get around and it was a whole heap of fun. 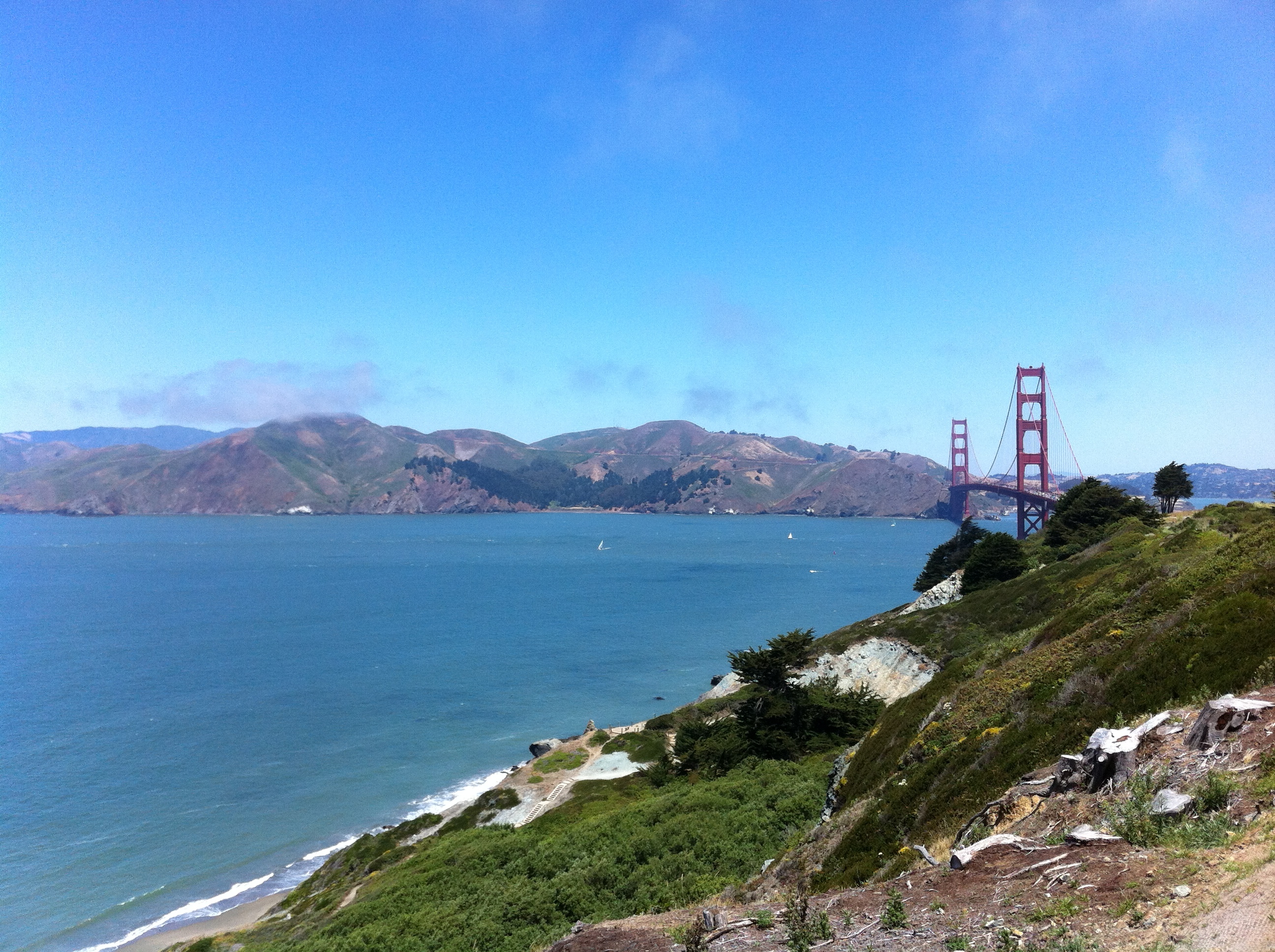 Eventually we made it to the start of the bridge and started making our way across. We’d been warned that the trip across would take a while given the multitude of pedestrians crossing in both directions. We didn’t mind — we had nowhere to be and it was nice just taking our time. As we rode across the bridge we had to resist the temptation to keep looking back at the city over to our right, lest we collide with the people around us.

At the other end of the bridge it was time for another snap decision: should we head down to the waterside town of Sausalito or climb the awesome-looking hill to our left? To my surprise (and delight) Ash said ‘let’s climb the hill’, and so we did. 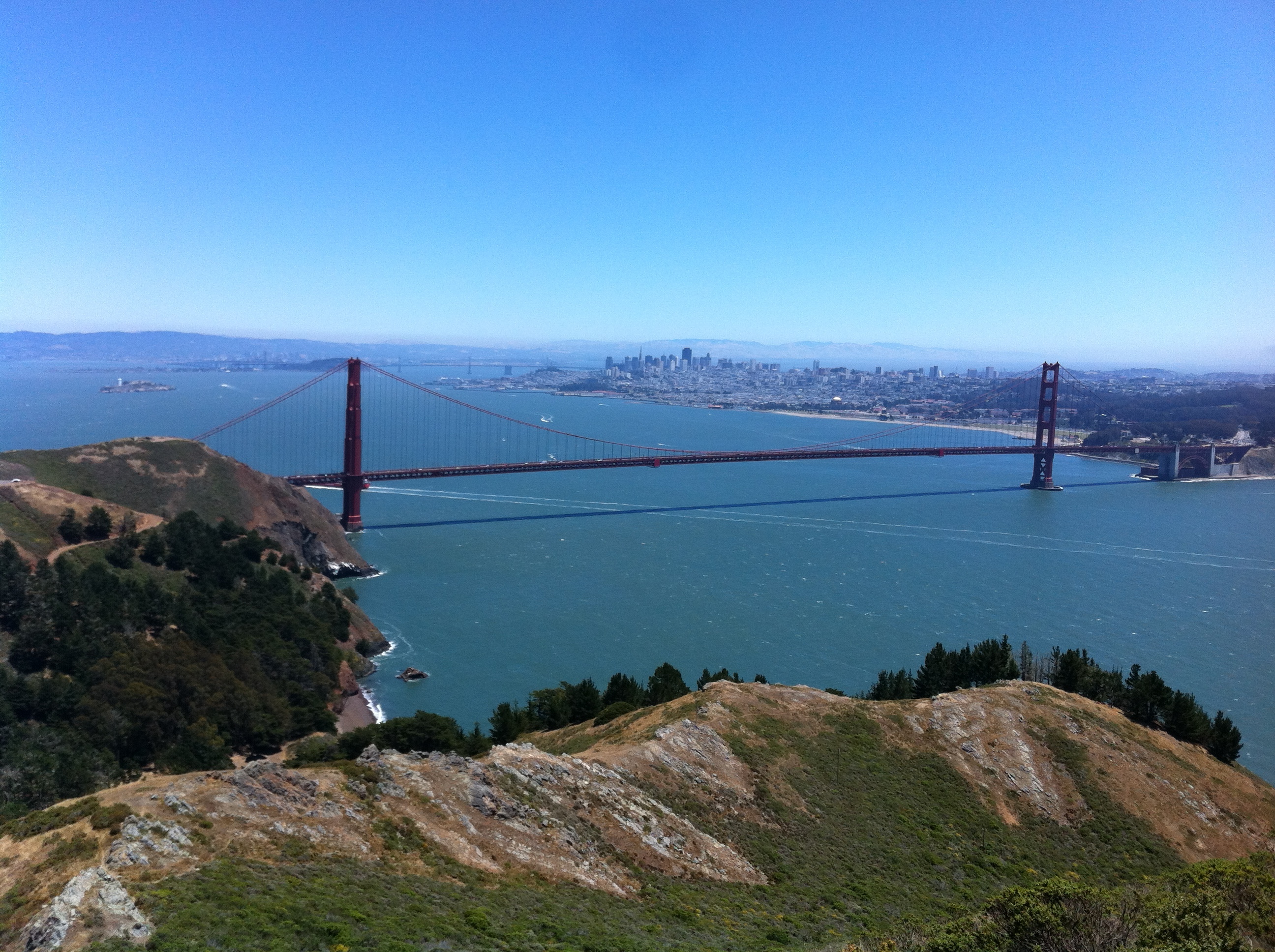 It was probably 3km from bottom to top at a gradient of around 5%. Not the toughest climb going around, but with the bikes we were riding it was made a little harder than it should have been. And full credit to Ash: the most riding he does is his commute to uni in Perth which, in his own words, is ‘about as long as one song on my iPod and dead flat’. To get up a sustained 3km climb with no training was a terrific effort.

At the lookout we took a few photos and a video (see lower down) and then followed the road up further. The bitumen came to an end but a gravel track disappeared skyward at about 20%. Using the lowest gear on the bike I was able to spin my way up the loose surface, but only just. From there it was time for a few more photos — including one of a truly stunning one-way coastal road (see below) — and then we descended the hill. 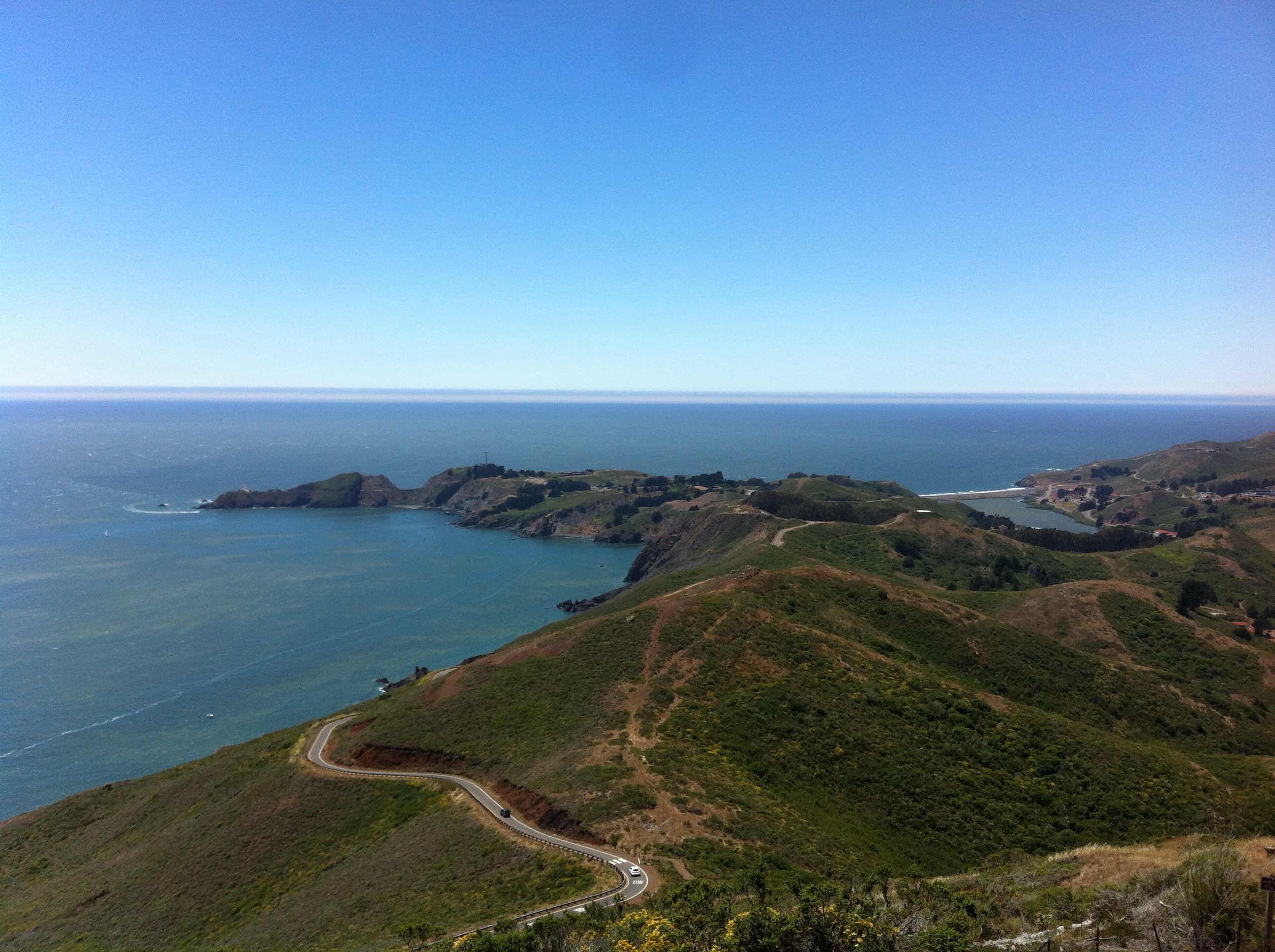 From the bottom we headed back toward the bridge and then down to Sausalito for a break. We scoffed down a tasty pasta lunch and took a look around the main street, before pushing on. Despite being really tired Ash was keen to push on and head for Old Mill Park, a heavily wooded area about 10km beyond Sausalito.

We headed in that direction and after taking a few wrong turns we eventually ended up at Old Mill Park. Just minutes from a busy town you find yourself on a narrow one lane road, with monstrous, straight trees disappearing toward the sky. Tiny streams trickle by the roadside and we found a small waterfall about 100 metres from the main road. It would feel very isolated were it not for the truly amazing houses that litter the area. None of my photos really turned out but this one gives you an idea of what I’m talking about. 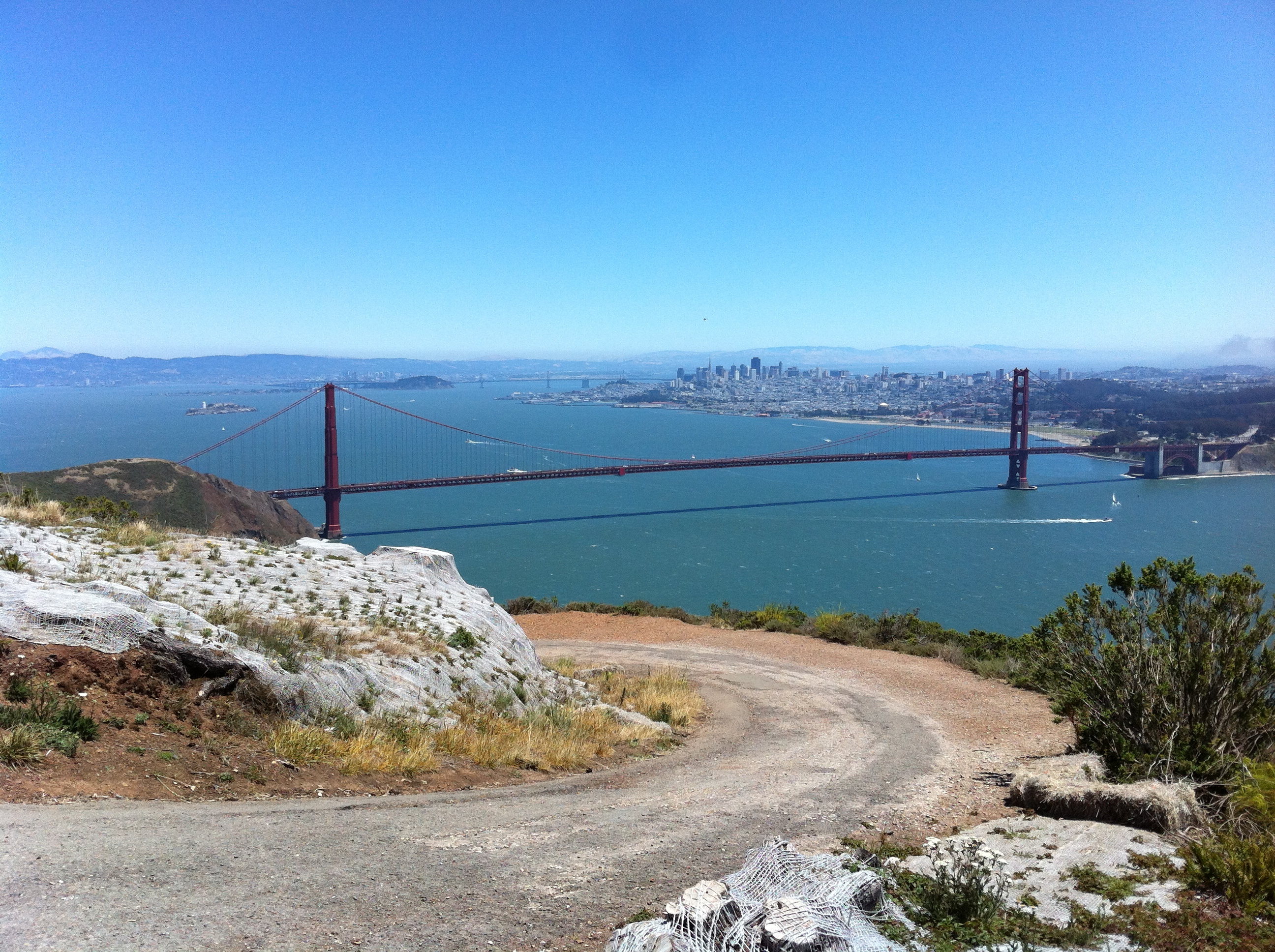 From Old Mill Park we headed back to Sausalito before it was time to make another decision. We had the option of taking the ferry back to San Francisco but again Ash was happy to press on and ride back to the hostel, despite increasing fatigue.

We climbed the 1-mile rise back to the Golden Gate Bridge in a headwind that made the climb feel a lot harder than it should have. And when we rode back along the Bridge we found ourselves heading toward a thick band of rolling cloud/fog/smog. Drifting north from San Francisco toward us, the cloud was so thick that we couldn’t see the bridge’s vertical structures even though they were less than 50 metres ahead of us. As the cloud hit us, the temperature dropped, the wind picked up and, despite the lack of rain, our hands suddenly felt really wet. 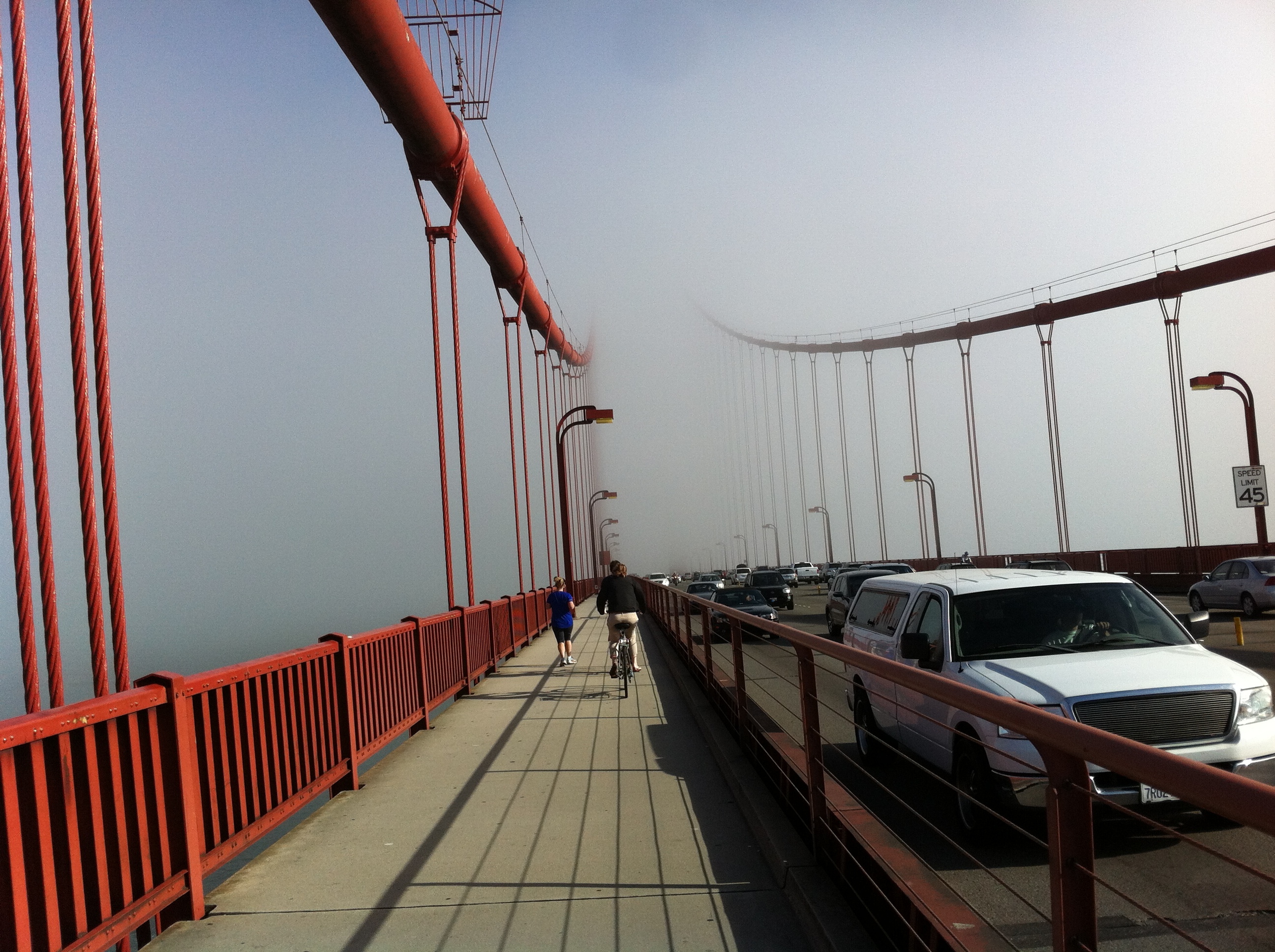 On the other side of the bridge, and out of the wind, we turned east and headed toward Lombard Street. While drivers had been extremely courteous to us all day until that point, riding along Lombard was pretty gnarly. A few cars got well within a metre which was pretty unnerving and strange to have cars so close on the left-hand side.

Eventually we reached the corner of Van Ness and Lombard and looked up at the hill ahead of us. We knew we’d be in for some climbing on the way home but we certainly could have picked an easier hill to go for. The first ramp was only about 15% but between Polk and Larkin, the road kicked up to a rather unfriendly gradient that mustn’t have been far off 30%. It was the steepest bit of road I’ve ridden but with the ridiculously low gear on the hire bike, I was able to spin up the hill at 7km/h without too much trouble.

From there we continued on Lombard, riding down the Crookedest Street in the World and then made our way through the final few kilometres back to the bike shop. We got there just as they were closing up and after dropping the bikes off we headed back to the hostel for a well-earned rest. 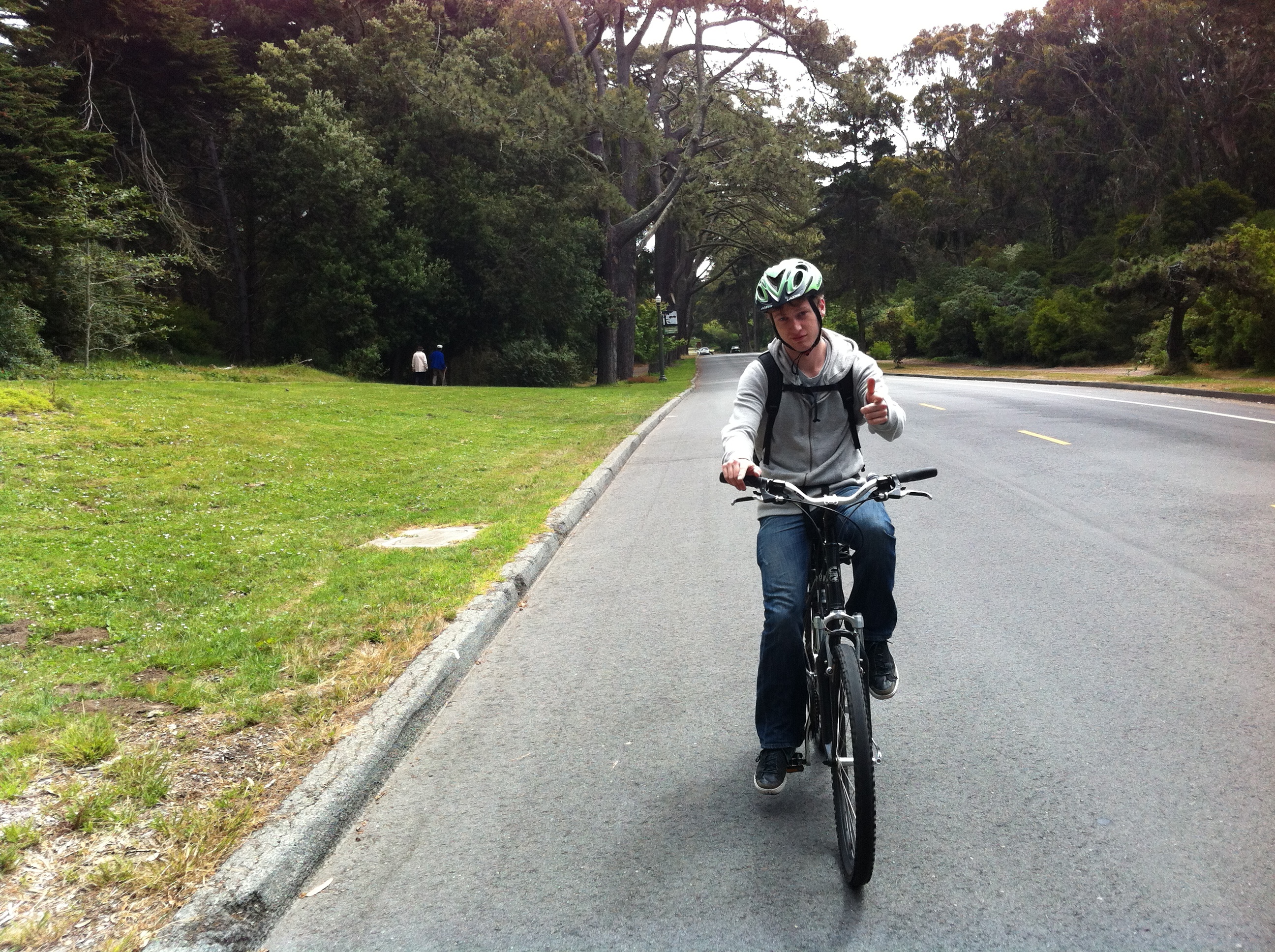 Kudos should again go to Ash for a fantastic effort on what was his longest-ever ride. But it wasn’t just the 73km that made it a challenge — we also covered 1,000 vertical metres and all on bikes that were designed for two-minute trips down to the corner store. His sense of adventure and willingness to just have a crack was inspiring and helped make for an amazing day.

I’m writing this on day three of the trip, from a bus between San Francisco and the Yosemite National Park. We’ll be staying there for three nights and I’m really looking forward to the amazing scenery, some great hikes and, with any luck, some more cycling. Either way, as long as I keep getting lots of exercise I’ll be happy.

Thanks very much for reading and until next time, please be safe on the roads!