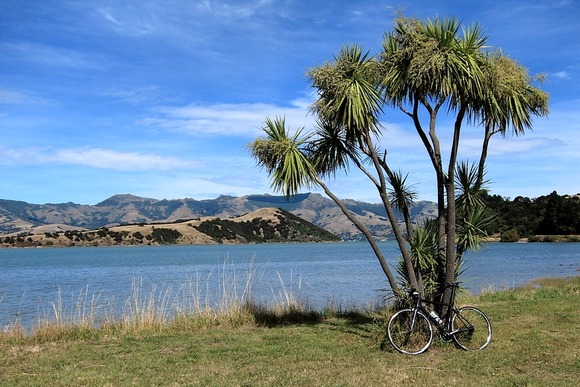 In early 2013 George Mallory (of Everest in a Day fame) moved from Melbourne to Christchurch for work and since then he’s spent some time exploring the many great rides around New Zealand’s South Island.

In this post he talks us through a challenging ride he put together near Christchurch which he’s called ‘La Marmotte Dreaming’, named after the famous French sportif.

If scenery is important to you while suffering in the saddle then the La Marmotte sportive in France really ought to be on your bucket list. The ride is 174km long with 5,180m elevation gain. It starts with the 1,400m climb to Col du Glandon which contains the steepest part of the course — a 1km pitch of about 11% just after a short steep descent.

The next climb is the Col du Telegraph/Col du Galibier combination. Col du Galibier, which tops out at 2,645m may be the most scenic piece of road you will ever ride (see photo below). From this highest point there’s a rapid 40km descent, traversing the hallowed ground where Cadel Evans clawed his way back into Tour de France contention in 2011 (albeit in the opposite direction).

There are several long tunnels, for which lights are legally required, before you get to Bourg d’Oisans. To finish the job all you have to do is hoist your tired backside up Alpe d’Huez.

The course has very little flat road overall and its profile (see below) easily passes the “looks spiky” test. 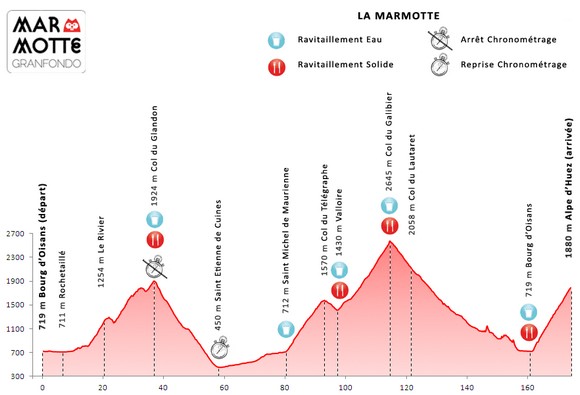 I have twice ridden the La Marmotte course (not the actual event which is busy and dangerous) and can assure any weekend warrior that it offers full value. But unfortunately La Marmotte is a long way from Melbourne and my new home of Christchurch, and I often find myself dreaming up routes that are akin to the French classic.

In Victoria the Audax Alpine Classic (197km with about 3,300m of climbing) has merit, but is deficient in both elevation gain and a subjective assessment of difficulty. The gradients are generally tame and never brutal.

The Alpine Classic Extreme is longer, taller and has several steep pitches — three on Mt. Hotham and “WTF Corner” at the start of the Back of Falls climb. But if I’m honest I have to mark it down because about a quarter of the course is virtually flat. I don’t mean any disrespect to those courses, nor the cyclists who have ridden them. It’s just that I can’t help seeking out better quality extreme loops, indulging in something I like to call ‘La Marmotte Dreaming’.

This article is about a loop near Christchurch which, at 78km long and with 2,500m of ascent, is clearly smaller than La Marmotte. However, what it lacks in magnitude I reckon it makes up for in ‘punch’ — a highly technical term that relates to the gradient and size of a climb and is best described by way of an example.

At just 1.5km in length, Mast Gully Road, in the Dandenong Ranges east of Melbourne, is modest in size, but at 15.8% average gradient, with two pitches of 20%, it sure packs a ‘punch’. Got it?

La Marmotte Dreaming starts in Little River, a village located some 60km from Christchurch on the main road to Akaroa, which is a small tourist town on the Banks Peninsula. Before I first rode this loop I had already ridden all of the course at various times, but not all at once.

In anticipation of a high-quality ride I recruited my friend Denis, a vastly stronger cyclist than myself, to set a respectable time on the maiden voyage. Denis kindly offered to wait for me at the top of each of the six big hills on the course, so to make sure he would get the overall KOM on Strava, I started several minutes ahead of him.

The first 3.5km of La Marmotte Dreaming is mildly uphill but compared with what lies ahead, think of it as flat. The first hill is a pleasant and windy 6.1km at a steady 7%.

The drop down the other side to Barrys Bay is well suited for practising fast sweeping corners. Cyclists can outpace the cars so you need to hope for a clean run with no traffic to impede your progress. It’s a fabulous descent if you get lucky. Even the road surface is unusually smooth.

Denis caught me soon after the start of the descent and I thought he would get the KOM for the descent segment, but unfortunately we were significantly delayed by a slow car about 2km from the base. Pity.

After an oh-so-brief flat there’s a punchy little climb (500m long at 10%) over a small hill and the associated descent to Duvachelles Bay. Another short flat leads to the next big climb which tops out at Summit Road.

All up it is 5.2km at 8% but there are a few 10% to 11% pinches. About a kilometre into the hill the route turns left off the main road and heads south. As hills go, this one has few memorable features, other than the view of Akaroa Bay over your right shoulder.

From the left turn the climb to Summit Road is a rather sweet 4.6km at 9%. Temping as it may be, this is not the time to drop the hammer. Despite offering that advice to Denis at the start, he rapidly disappeared up the road and grabbed the KOM. As an aside, I happen to be well acquainted with this particular hill, and the associated descent. Three days after La Marmotte Dreaming I, figuratively speaking, climbed Mt. Everest by doing 23 laps of the climb (click here for more information about ‘Everesting’).

At the top of the climb, the course crosses Summit Road and descends towards Okains Bay. This is a steep descent with at least one sharp hairpin bend and the road is of generally poor quality. In fact it is bumpy enough that Denis managed to lose a water bottle and had to stop and pick it up. I was ahead of him at the time and wondered what happened.

It is never easy to know what to do when you are ahead of a stronger rider who disappears off the back. I wondered: “Should I turn around to see if he’s OK? Or maybe it’s just a minor mechanical, in which case I guess it’s probably OK for me to carry on”, which is what I did.

The gradient tapers and the road straightens towards Okains Bay. Look out for a left turn on a narrow sealed road to Little Akaloa. There’s a small signpost on the right and the yellow lettering says, you guessed it, “Little Akaloa”.

After crossing an estuary the road immediately kicks up and on to a segment called Seftons Road climb. At 1.6km in length the grandeur it lacks is compensated for by its punchy 11% gradient. The view of Okains Bay is stunning (see image below). Denis overtook me half way up. I had just enough spare breath to ask what happened and to say “see you back at the car”. Then he dropped the hammer to collect the KOM.

There is an intersection at the top of the climb but the course carries straight across and down the hill. At the end of the descent is the only place where, reasonably, cyclists need to be warned of a distinct danger.

At about sea level there is a hairpin bend that appears too rapidly if you assume the curves above are indicative of the curves ahead. The first time I rode here I could not take the corner and had to ‘blow out’ on the far side. Luckily there was no traffic.

The next hill is the Chorlton Road climb (2.5km at 8%) and if I’m honest it has little to distinguish it, other than the view of Chortens Bay (see image below). But that’s OK because it’s a good time to drink up, eat sweets and brace for your battle with the monster that lies ahead.

In Little Akaloa I again met up with Denis briefly who had stopped to fill a water bottle, the one that broke loose on the big steep descent and emptied itself in the process.

The approach to the Little Akaloa to Summit Road climb gradually steepens, but the Strava segment starts at a bridge across a small creek after some limited steep ground and a small false-flat.

The stats for the climb (2.6km at an average gradient of 14%!) say a great deal. In all honesty, most weekend warrior cyclists are not able to relate to a hill of this severity.

When ridden as a single segment with warmed-up and fresh legs, on a cool day with a strong tailwind, it is pretty darn hard. I’ve had those circumstances and my bike was stripped of all paraphernalia. Even so I had to rapidly alternate between grinding and standing. “Attacking” would be a misnomer.

On this occasion we arrived at the base of Little Akaloa to Summit Road with 1,600m of climbing in our legs. My bike was weighed down with two cages, 300ml of water — which I was prudently saving for the final climb — and a spare tube. Conditions were sunny and warm by Christchurch standards and all I can say is: I really suffered.

On the real La Marmotte in France there is nothing that comes close to this hill. I would venture to say that thousands of weekend warriors who are capable of riding La Marmotte will get off and walk up much of Little Akaloa to Summit Road.

When I eventually reached Summit Road there was no sign of Denis but I wasn’t expecting any. So I cruised down the road to where you turn left and drop steeply down into Barrys Bay. I had not previously made this descent and had therefore never paid any attention to what the signposts say. In fact there are no signposts and I later learned that Denis overshot this turn by several kilometres before correcting his mistake.

The last climb of the circuit (6.2km at 8%) takes you back up to “Hilltop” from where you can almost freewheel back to the car. This is the climb on which to drop the hammer and burn some rubber. Yeah right! Not me, not today.

Dehydration had set in and I was comprehensively knackered. Luckily the gradient is moderate by the demanding standards of the area and I was able to get into a rhythm and crank it out.

To my surprise Denis was not waiting at the car. He appeared five minutes later and explained his navigational glitch. No big deal but it did mean that, despite my best intentions, once I had created the Strava segment for the whole ride, I was given the top spot. Oh well, sometimes stuff happens and you just have to suck it up.

George has written a couple of articles for The Climbing Cyclist in the past: one about tackling the challenging climb up Monte Zoncolan, and the other about the various games we can play as cyclists when it comes to the hills. I highly recommend both articles. All images in this post appear courtesy of George Mallory.